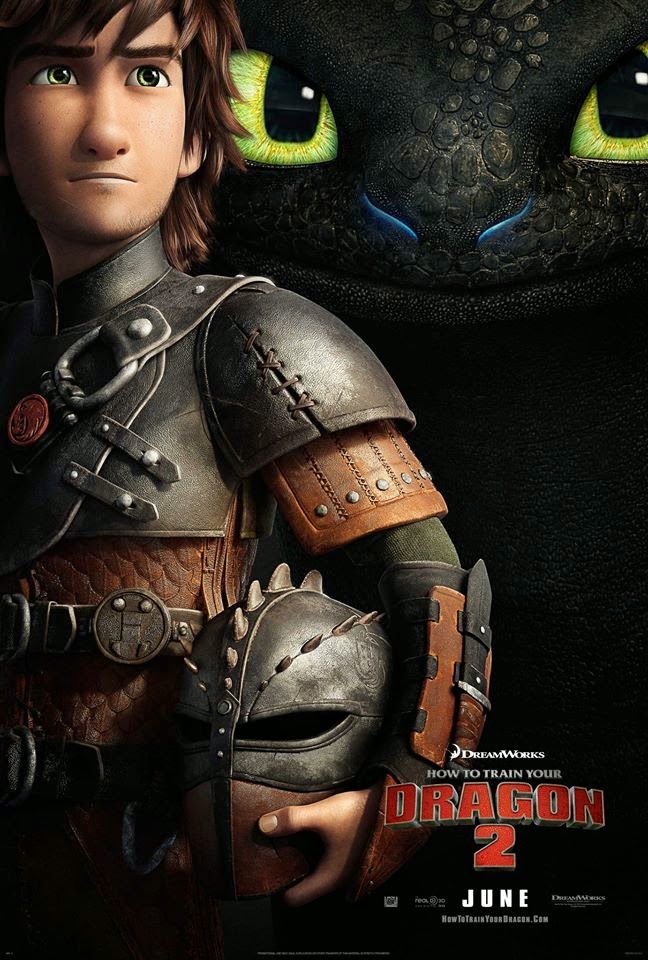 Valka:  You have the heart of a chief and the soul of a dragon.

It is amazing how things work sometimes.  How To Train Your Dragon gets credit for being a sleeper success, as many were not thrilled by the marketing, but it ended up making big bucks and spawning a whole franchise (sequels, TV shows, etc.).  I was actually quite intrigued by the trailers for the first film and the amazing reviews set my hopes even higher, yet I was only just okay with the first installment, despite its mature story and fantastic sense of filmmaking within the bounds of an animated feature.  Now we have How to Train Your Dragon 2, which I found to be immensely entertaining and satisfying on pretty much every level.  This is a film that capitalizes on what made the first film work and completely expands upon the world introduced to us the first time around in an effort to make a truly worthwhile sequel that could satisfy nearly anyone. 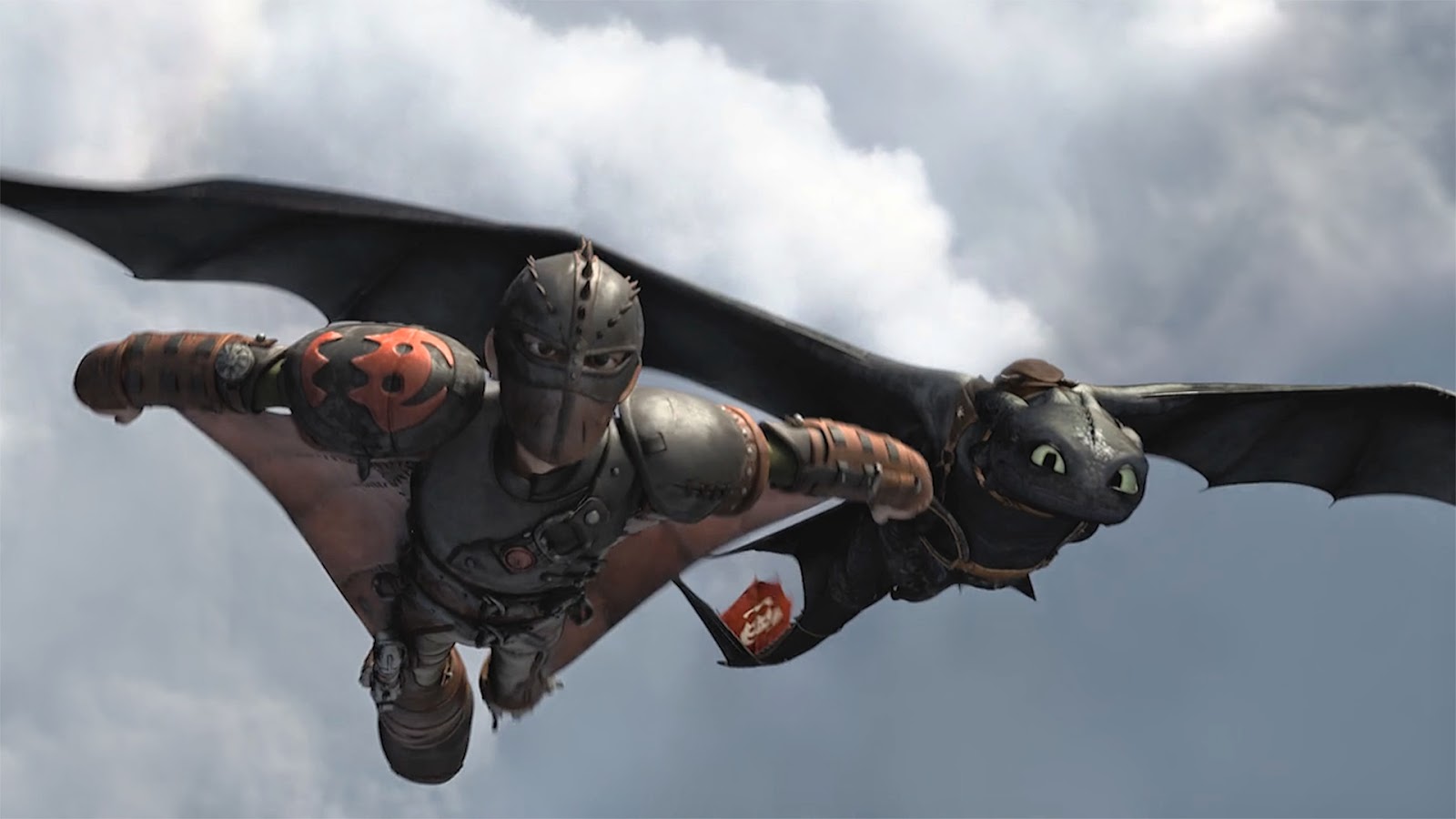 Pickup up five years after the events of the first film, How To Train Your Dragon 2 puts us back in the world of Berk, which has since freed itself from views of dragons as the enemy and now sees them as peaceful friends.  Hiccup (Jay Baruchel), son of the Viking leader Stoick (Gerard Butler), is currently holding off from learning the responsibilities of being a chief, in favor of exploring more of the world with his loyal companion and rare Night Fury dragon, Toothless.  Upon finding new locations they learn of the existence of more dragons and dragon riders, as well as individuals that have both good and evil intentions for these creatures.  Hiccup will now face challenges in a number of ways, which will require all of his skills as an inventor (wait until you see what Hiccup has built in this film!), a dragon rider, and a hero.

It really is the idea of Hiccup the hero that makes this franchise work for me.  Say what you will about Jay Baruchel (though I don’t know what you’d have against the guy), but he imbues the character with a sense of earnestness that is never annoying and an overall personality that is clearly inspiring to many.  Many may applaud the use of dragons and how they have been brought to life in these movies, but Hiccup is pivotal in keeping these films together.  He is the center of many different plot lines and the fact that he is not too much of a saint nor a reluctant hero in any sense is something that is truly admirable to see in a film series crafted for everyone.  One can also appreciate the desire to embrace the handicap he suffered in the first film, tying him closer to Toothless, as well as guiding his inventive spirit. 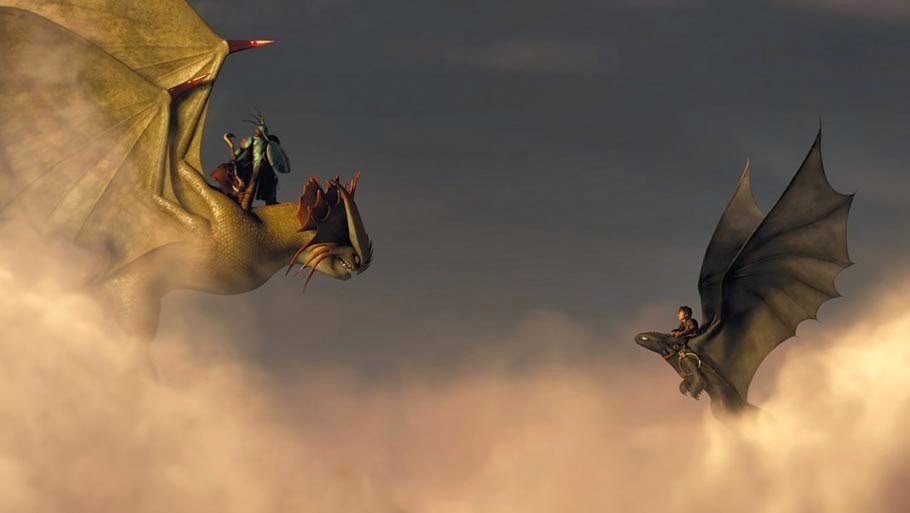 Writer/director Dean DeBlois has obviously learned a lot since the first film, because even those who love How to Train Your Dragon are sure to be impressed with how naturally this film seems to follow the events of the first, while expanding in new and creative ways.   It also looks and sounds pretty amazing, but I’ll get to that.  This is a film that has clearly learned from the best sequels and found a way to invest viewers in the same characters that have evolved based on their own growth.  The film wisely ages up the young characters in a visual sense, but it also has them acting in ways that suggests growth as people.  Berk has obviously changed its ways, given the presence of dragons, but Hiccup has a lot on his mind, as do characters like Astrid (America Ferrera), who does not simply become the hero’s girlfriend, but instead has her own plotline to deal with.  DeBlois has carefully built the story of this world to incorporate a lot of characters and ideas that make it different from the first, but not overcrowded, too open-ended, or overlong.

The new characters add plenty of value to this story.  Drago, the new villain voiced by Djimon Hounsou, makes for a commanding presence and does a fine job of raising the stakes of the film.  Another new character is Valka, voiced by Cate Blanchett, who combines the nature of her past work as Elizabeth with the sensibilities of a Jane Goodall type, in an effort to stand as a strong new addition to the series and one of my new favorite animated characters.  I tend to champion voice actors over big celebrities that happen to be providing voices, but Blanchett does a pretty tremendous job here.  The returning cast is a lot of fun too, with actors like Craig Ferguson, Jonah Hill, Kristen Wiig, and T.J. Miller providing plenty of humor and Gerard Butler continuing to provide a surprisingly emotional performance as Stoick the Vast.  That is a character that has somehow been written to once again be at odds with his son, but in new ways that lead to some fine moments in this feature that really resonate. Oh, and I haven’t even mentioned the dragons yet.  There are a few new types, along with returning favorites, and they all look fully realized and fantastic in action.  In general, this film looks pretty amazing.  Working with some new animation software, it is easy to state that this is one of the best looking CG animated films yet, as the technology can only continue to improve, but How To Train Your Dragon 2 looks great and is further benefited by its continued use of famed cinematographer Roger Deakins as a visual consultant as well as the use of 3D, as this series is one of the only set of films that I will recommend wholeheartedly in the format.  The visual intensity is a wonderful thing to experience on the big screen with this film, as the new environments, dragons, and scope of the picture are truly impressive.

Plenty of credit also goes to composer John Powell as well.  The main theme of How to Train Your Dragon was an aspect that truly stuck out and this is a sequel that, like the rest of the film, really expands upon the first and creates an equally wonderful score this time around.  It is important to note, as this is a film that has serious aspects, but also wants to evoke a sense of fun and adventure, which is featured plenty in this film, and a strong score can help a viewer keep all of that in mind.  It is because of this score (and many other elements of this film, of course), that I can easily say that few films have engaged me on the same level that How to Train Your Dragon 2 has this year, in terms of general entertainment, and it is very fitting that this is a big summer release, as it really deserves plenty of attention.

Maybe the most impressive aspect of this film that I clearly had a wonderful time with is its balance.  How To Train Your Dragon 2 manages to be an fine action/adventure film, with plenty of great character interaction that is able to deliver on both the laughs and potential heartbreak that many audience members will likely experience and appreciate.  The film is certainly not a weepy, but it puts plenty of care into not just being a great-looking film (which it is), but a film full of personality and an ensemble worth caring about.  While I can continue to praise the more original films of this summer (more people need to see Edge of Tomorrow), seeing a sequel like this is the best many can hope for, when continuing on with the adventure of characters you liked the first time or if you just happen to be taking your first step into the world.  Unless we are in store for some truly spectacular big films during the rest of the summer, How to Train Your Dragon 2 easily soars above other blockbusters.

Tuffnut:  I’ll bloody his fist with my face, if he tries to take my dragon!