Cruise And Blunt Fight Til The ‘Edge Of Tomorrow’ (Movie Review) 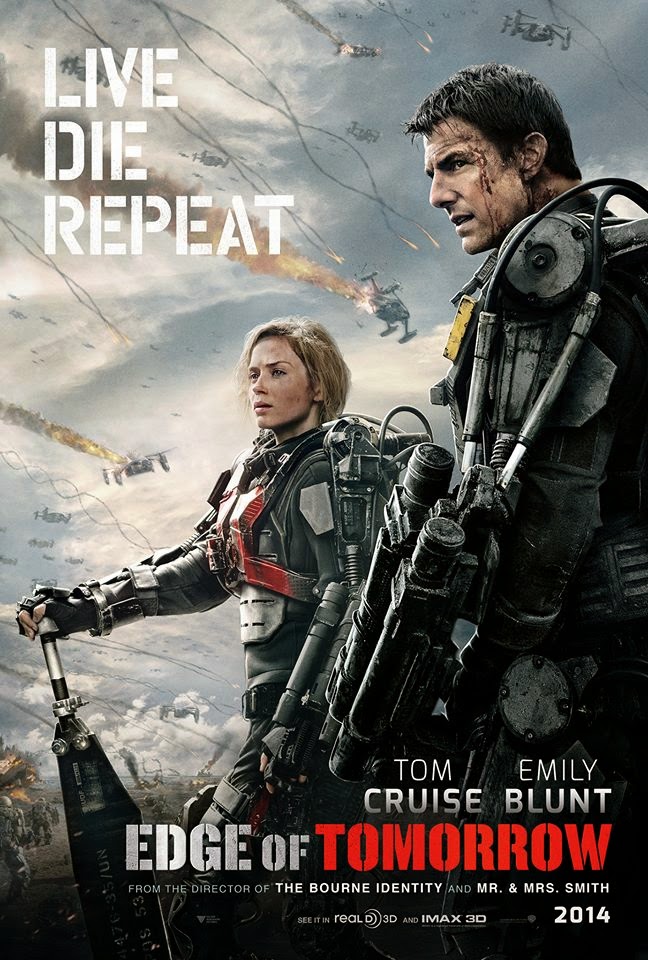 Rita:  How many times have we been here?

At this point, Tom Cruise does not need to be defended for doing what he is good at.  The guy works incredibly hard to make movies that entertain audiences, fully committing to roles that may not require him to break out of a certain character type, but that’s why he’ s a movie star and not a character actor.  Clearly he saw something in the script for All You Need Is Kill (now titled Edge of Tomorrow) that he felt would go well with the other sci-fi films in his filmography, because this did not look like an easy movie to make, yet it continues to add credence to his status as a huge sci-fi geek (I mean the dude actually believes in aliens).  Edge of Tomorrow is inventive, witty, fun, and many levels of awesome, all rolled up into one fine summer movie package.  If that’s not what you want from a summer action movie, Tom Cruise surely isn’t the one to blame.

Cruise stars in this film as Major William Cage.  The story presents a Twilight Zone scenario in the midst of a full scale alien invasion movie.  Cage is something of a weaselly character that has attempted to stay out of harm’s way, only to find himself on the frontlines of the battlefield.   Though Cage dies within minutes of full scale attack, a cruel twist leaves him repeating the same day again and again.  This has to do with the aliens that Earth’s soldiers are fighting against, but that is all explained later by Emily Blunt’s war hero character, Rita Vrataski.  She used to have a similar affliction that Cage is currently experiencing.  Regardless of explanations, Cage and Rita soon realize that they will have to practice the events of the day again and again, in order to be trained enough to stop the alien threat.

Though adapted from a Japanese light novel, Edge of Tomorrow is certainly not the first film to use a time loop as a plot device.  Obviously saying something like, “Groundhog’s Day meets Starship Troopers,” is a pretty simple way to sum up what the basic concept of this film amounts to, but Edge of Tomorrow has the kind of smarts that put it well above simple labeling.  Plenty of justice is done to the premise that does not just get away with its plotting because of fancy explanations, but is instead able to visually communicate what is going on, have characters find just the right amount of dialogue to ground the concept, and keep things moving based on how both Cruise’s character adapts and how director Doug Liman makes a film about time repetition rarely feel repetitive.

Liman is aided by a skilled crew of filmmakers and a few writers that most notably include Oscar-winner Christopher McQuarrie (The Usual Suspects), who has basically been best buddies with Tom Cruise for the past several years (their next collaboration will be Mission: Impossible 5).  McQuarrie’s involvement provides Edge of Tomorrow with the elements that push the film beyond being a sci-fi action flick with a neat gimmick.  There is a lot of fun to be had in this film and it often comes from balancing the cynical and darker edges of what is being presented here with the near-Looney Tune-like violence that comes from allowing a character to be killed repeatedly, since he will only live to die another day.

As the unlucky SOB who is featured in more ‘that’s gotta hurt’ moments than any one man in a film I have seen in a while (short of maybe Johnny Knoxville in a Jackass movie), Tom Cruise is rather excellent.  It is fair to say that he may not be stretching himself too far in terms of his attitude, but this is not about transforming oneself for the sake of a part.  Rather than crucial weight gain and a wig, Cruise is simply playing up one aspect of his personality at first, which later evolves, as Cage goes from a man trying to stay out of the fight to the guy trying to perfectly make his way through every situation in an effort to be a true savior.  Doing all that, while remaining likable, is a trickier act than many may understand, but similar to the character in this film, Cruise has spent a good number of recent years taking hits and getting back up to do it again and again.  All the Cruise-isms may be here (his running is certainly in full-force this go around), but I personally find it hard not to enjoy seeing Cruise pushing himself physically in these sorts of films, while still being dramatically competent.

All that said, plenty of credit goes to Emily Blunt as well, as her character is all sorts of badass.  As Rita, we learn pretty much all we need to know about her from the first glimpses we see, but I can credit the screenplay and editing work for how effective and important to the story she becomes, based on the way we learn about who Rita is.  There is a craftiness that I must give credit to, when it comes to shaping characters that we have technically only known for one day.  This is partially why Bill Paxton is effective in a supporting role, as he only has so many beats to play, but repeating them in slightly different ways, each time, allows an understanding of who this person is.  Blunt obviously has much more to do, but that same effect applies, just in a greater way, given how essential she is to the story.  And she also wields a pretty awesome-looking sword to fight aliens with.

Yes, along with being an intelligently thought sci-fi film, Edge of Tomorrow is also a really cool action movie.  Costume and production design are great aspects of this film, as it relies heavily on characters in battle suits fighting off swarms of mechanical octopus-like alien creatures.  The aliens may not have much personality, but this is really not a film that needs to really focus on the physical threat, as much as the implicated stakes involving them.  With that in mind, getting to watch these large-scale battle sequences easily evoke D-Day imagery (and the movie happens to be opening on the anniversary of that day), but not with portraying the true brutality of war in mind.  Instead, Doug Liman and his team have found a way to keep the grim nature of this war balanced with the fun of seeing Emily Blunt diving through the air, with a sword, onto crazy octopus creatures.  The best part of all is how it feels like it matters.

Edge of Tomorrow may have a fairly generic title, but the film feels wonderfully refreshing in the way it handles its premise, characters, and action.  The time loop device allows the film to explore interesting ideas, as well as keep the inherent fun that comes from that in mind.  Cruise and Blunt excel in roles that must have been physically demanding and also deliver on the well-scripted material they had to shape their characters.  And lastly, the film is constantly exciting and full of diverse and inventive action that feels organic to the film.  Tom Cruise has once again put a lot of effort into making solid sci-fi movie and this is a really clever and entertaining film that deserves attention for not only trying to make a dent in the summer, but succeeding in ways that should make other films try to make more impactful dents in the future. 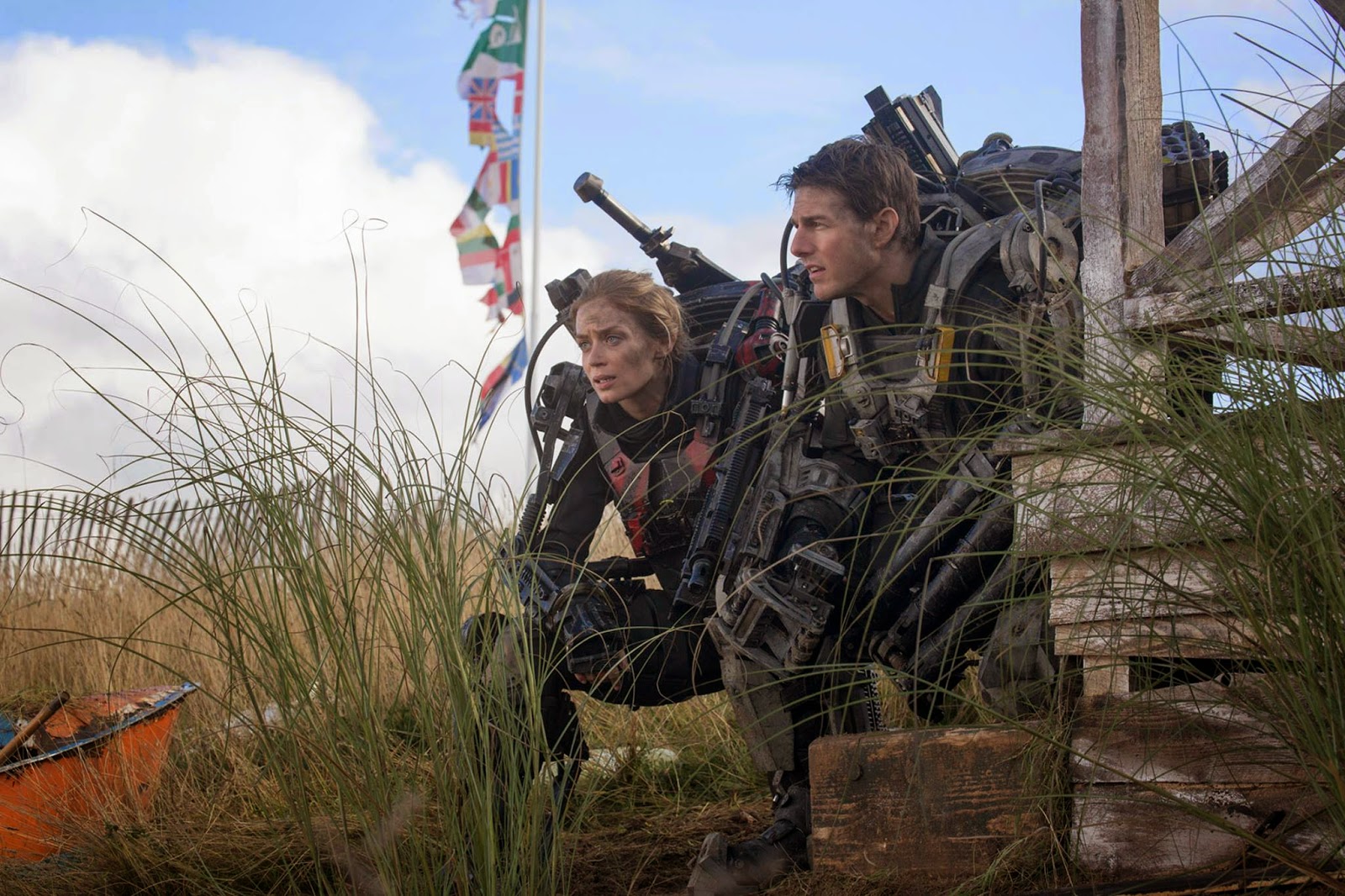