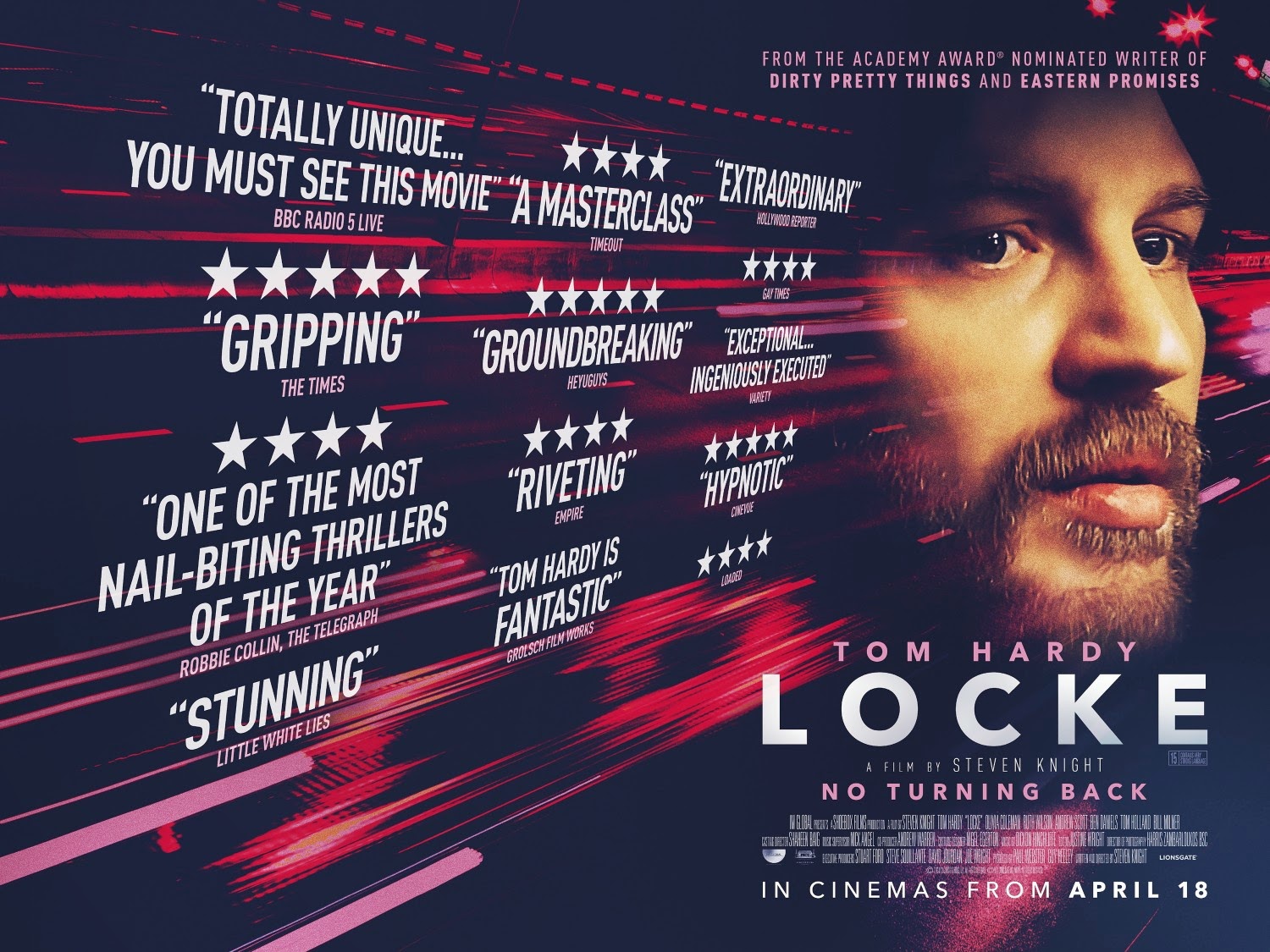 Ivan Locke:  I’ve made my decision.

Watching someone attempt to control chaos can be a very exciting thing.  Fittingly enough, in recent years, I have now watched two major Batman villains attempt it.  Obviously Heath Ledger did his best to wreak havoc on the fictional Gotham City, only to be nearly outdone later by Tom Hardy’s Bane, but now Hardy is attempting to control a far less grandiose form of chaos:  the destruction of his own life.  Locke is a wonderfully gripping drama about a man attempting to remain calm and coherent in the midst of his entire life falling apart.  Set in what amounts to a singular location with only the physical presence of one actor, it is not just control on the part of the character, but the filmmaking in general that makes this film so compelling, despite its minimalist nature. 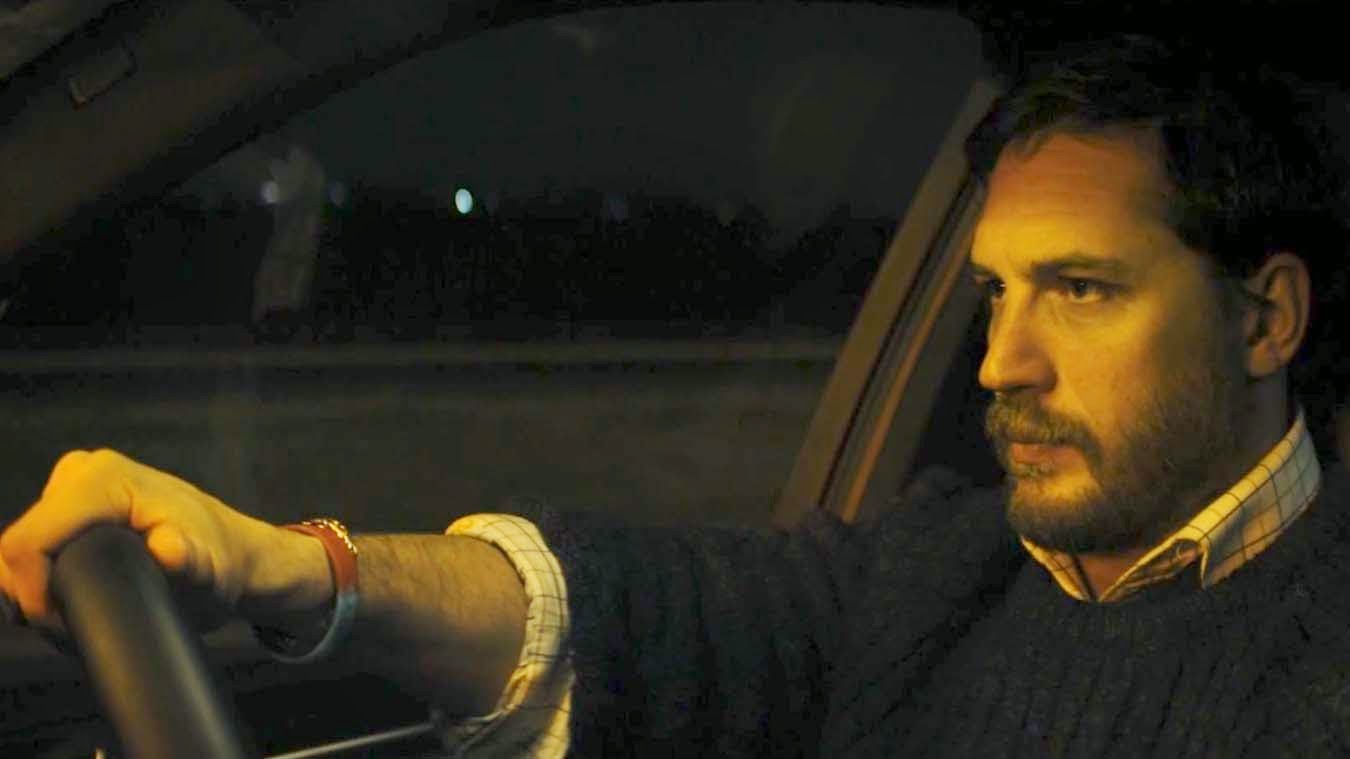 Hardy stars as Ivan Locke and on the night we follow him, he has certainly seen better days in his life.  Before tonight we can gather that Locke is a happily married husband and father, with a good job that he is very proud of.  Locke is introduced to us as being distraught and we soon find out why.  While I have no desire to go through every detail, the urgency in this film is caused by an event that has the potential to wreck all of the things that should make any man proud.   Choosing to take a long drive and handle everything over the phone, it will be a long and difficult night for Mr. Locke, but hopefully his calm and collected nature won’t be outdone by the frustration, confusion, and other elements that rest in the back of his mind.

The film was written and directed by Steven Knight, who I have been happy to support due to my love for his work on Eastern Promises and Dirty Pretty Things.  While I found his directorial debut, Redemption (starring Jason Statham, who continues to prove he has other strengths as a performer, beyond physical ones) to be interesting enough, but not entirely satisfying (though friend and fellow Why So Blu writer Gerard Iribe had it in his top ten of 2013, so take that as it is), Locke is incredibly confident through and through, with an impressive array of filmmaking techniques to keep this film very watchable, despite being solely focused on Tom Hardy driving a car to London.

Knight and his cinematographer Haris Zambarloukos do not go for many highly involved theatrics to emphasize how the film shifts around, based on the emotion of certain scenes or anything of that nature.  Instead, there is a lot of subtle effort put into fading and cross-fading in and out of different scenes, playing around with the focus, and putting in an attempt to capture the beauty of a long highway during the night.  I tend to be one that finds himself annoyed at certain theater-to-film adaptations, because I sometimes find them too stagey, so watching an original one-man-show and being continually engaged by what was put on display to keep it compelling was a big positive for me.

All this talk about impressive filmmaking and being a one-man-show and there still is not anything else to see beyond a car ride.  It comes down to how creatively daring this film attempts to be by stripping everything else away and allowing us to watch one man have conversations over the phone with others.  Tom Hardy is fantastic here and definitely up to the task of delivering what is necessary to make a role like this work.  He makes it easy to understand this character, without trying to make him charming.  Hardy is able to convey a lot of emotions in a number of scenes, whether he can really vocally share what he is feeling or not, based on who he is talking with at the time.  He does all of this, while also handling a cold and juggling the details of his work life with whatever is going on in his personal life.  While I have since learned how his performance was captured, the important thing is that we see it on screen and it is incredibly effective.  As a person who finds Hardy’s performance in Bronson to be one of the best in the last decade, he has certainly come close to outdoing himself here.

Hats off to the numerous actors appearing only in vocal form as well.  Andrew Scott’s performance as Donal, a man who works for Locke, comes the closest to providing a bit of comic relief to the film, but even that relationship is built upon the impending drama that unfolds.  I also find myself continuing to appreciate Ruth Wilson more and more, every time I see her in something and I have a lot of praise to give out to how she handles her role as Locke’s wife, Katrina.

Quiet, yet compelling; simple, yet chaotic; Locke is a fantastic drama that dares to get a lot from very little.  Wonderfully performed by Tom Hardy and confidently directed and produced by Steven Knight and his team, this is a film that really drew me in and played on what I like in these smaller scale dramas.  Watching a man try to keep a life together, which he knows has the potential to end, manages to blend tragic circumstances with a manner of uplift in a way that only certain films can achieve so often.  Seek out Locke; take a good drive to find it, as it is a very good film. 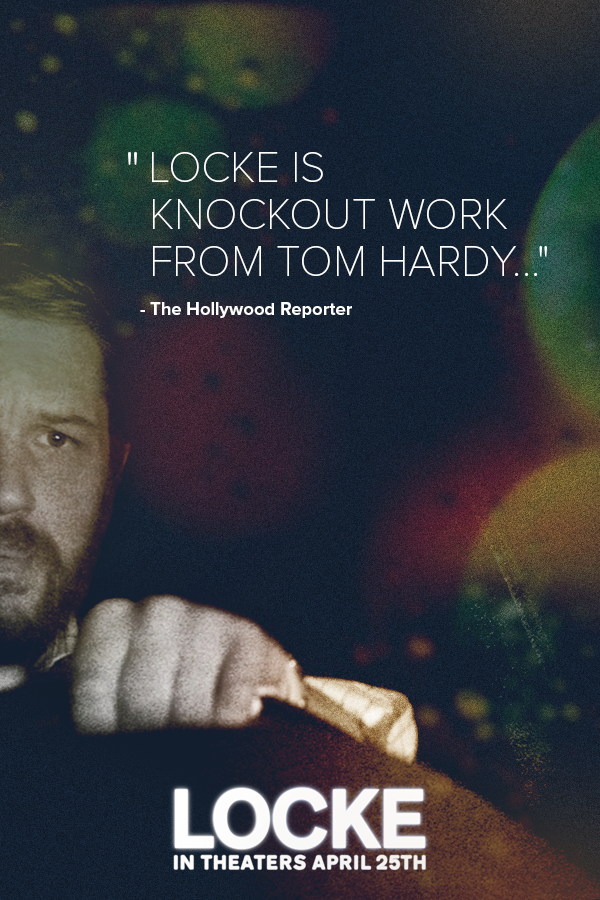 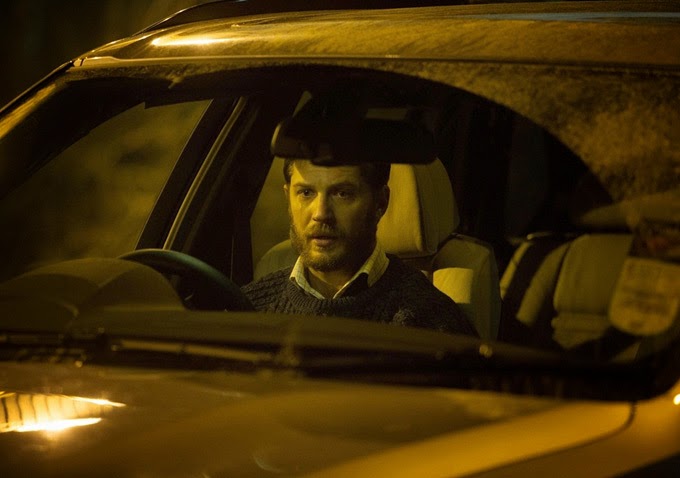 Aaron is a writer/reviewer for WhySoBlu.com.  Follow him on Twitter @AaronsPS4.
He also co-hosts a podcast, Out Now with Aaron and Abe, available via iTunes or at HHWLOD.com.
By Aaron Neuwirth
2014 Films Andrew Scott Arthouse Drama Ruth Wilson Steven Knight Tom Hardy
Reactions: