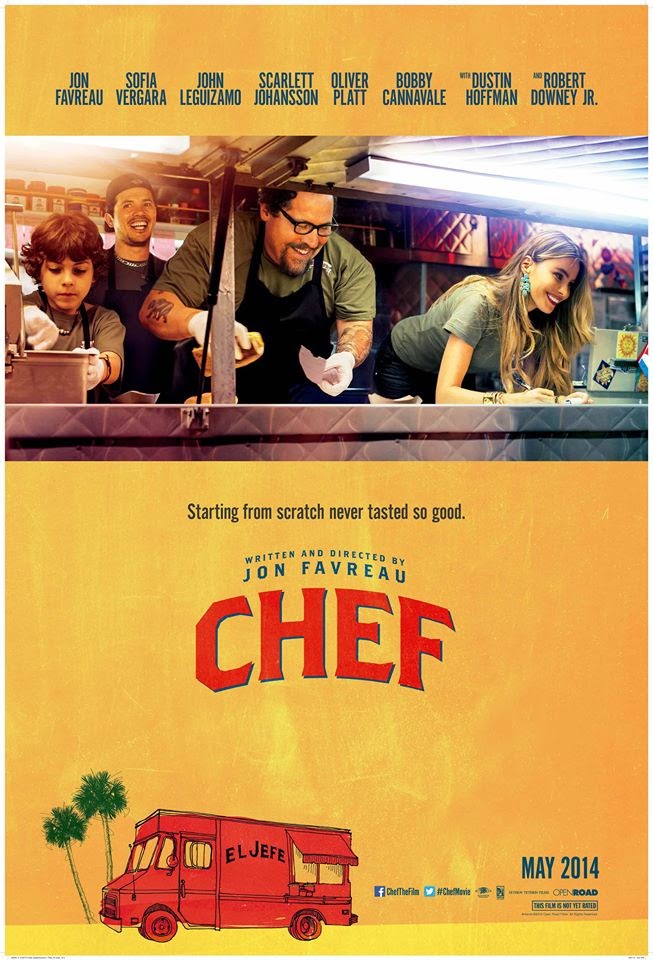 It does not take a whole lot for a film to win me over if it has a lot of charm.  Get the right cast and allow them to have fun that is evident in the film and I will be happy to sit back and enjoy what has been put in front of me.  Swingers is a favorite movie of mine because, despite the shagginess of the production, it has great cast interplay to go along with the depiction of nightlife in LA.  Jon Favreau wrote and co-produced Swingers back in 1996 and has since gone on to direct much bigger movies like Iron Man and Elf.  Chef takes him back to his indie roots.  Working with a small budget and a simple concept, he has managed to take what he’s learned from his bigger movies and combine that very effectively with what he was able to do in his earlier films like Swingers and Made.  The result is an incredibly charming film, with a great cast, a nice father/son story, and some terrific images of food to gaze upon. 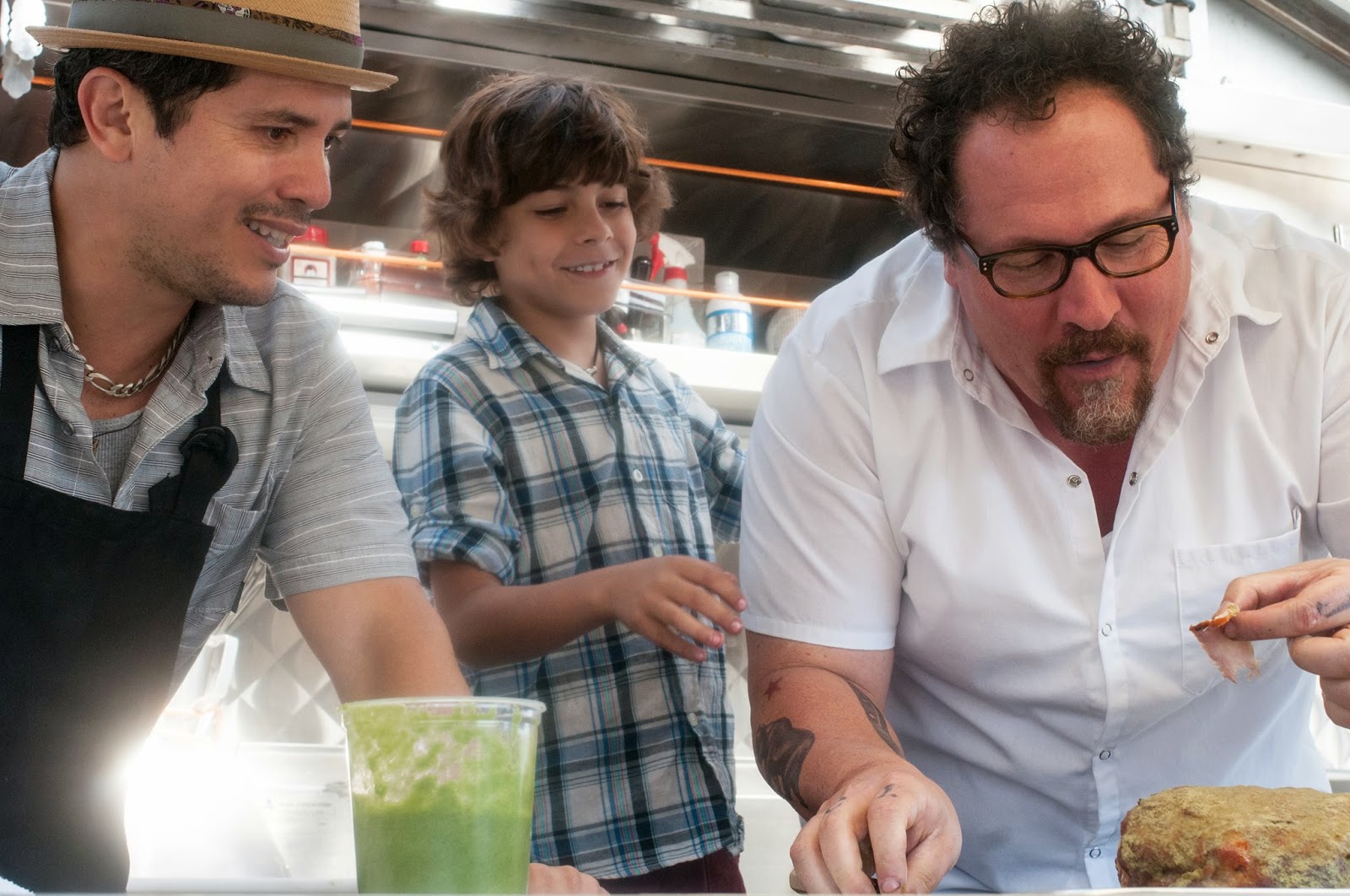 Favreau stars as Chef Carl Casper, a man who received lots of praise early in his career, only to move to Los Angeles, find a comfortable place to cook great food, but fall victim to a creative rut.  After receiving a bad review from a food critic (Oliver Platt) and arguing with the restaurant’s owner (Dustin Hoffman) over what he wants to be able to put on the menu, Carl heads back to Miami as a sort of retreat from the public eye.  In an effort to make the food he wants for people, he eventually decides to purchase a food truck and go on a cross-country road trip with his son, Percy (Emjay Anthony), and fellow chef friend, Martin (John Leguizamo), where they build a new following thanks to both the quality of the food and Percy’s social networking abilities.

There are a lot of aspects about this film that tie it right into Swingers and Favreau’s career since.  True to his roots as an independent filmmaker, Chef follows convention to a point, but it plays by its own rules.  The first act is very shaggy, introducing us to a lot of characters, the life of a Chef, and all kinds of story details that lead into the food truck purchase.  This is maybe a third of the film, but it works for me.  I like the buildup of a story like this that does not spell out where it is headed too quickly, having more fun establishing its atmosphere instead.  It helps that Favreau has brought together a great cast. 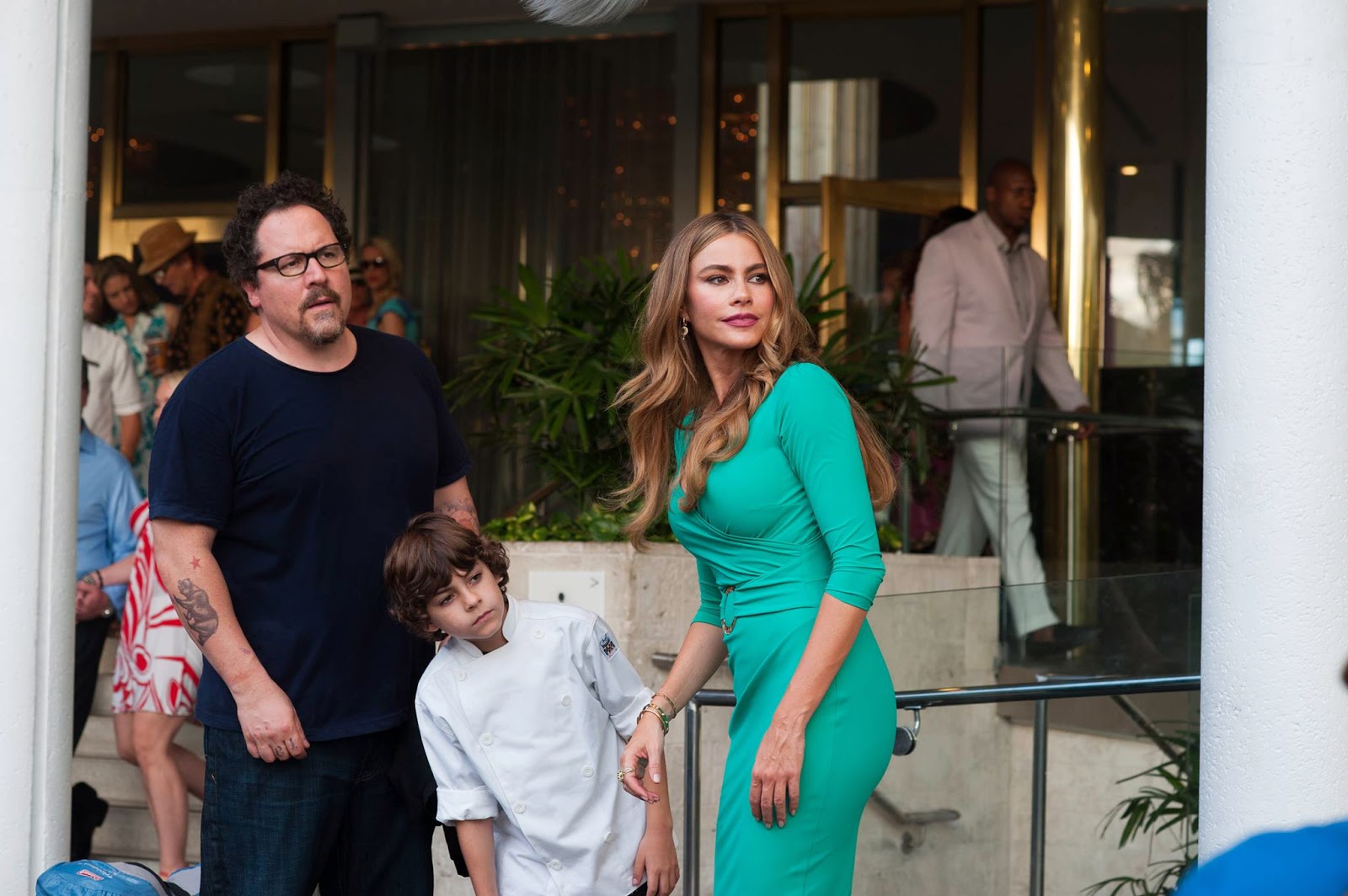 Along with Leguizamo, Bobby Cannavale is the sous chef in his kitchen, and the two practically serve as a replacement for Vince Vaughn, who has long served as a comedic foil/friend for Favreau’s characters.  The three of them have great chemistry, but Leguizamo really shines, once he is on his own with Favreau and young Emjay Anthony as the son.  Anthony also displays a great amount of talent as the kid who just wants to hang out with his father more, which turns the film into a really nice story about growing as a father, as well as a person.

The film also features Sofia Vergara as Inzez, Carl’s ex-wife.  Given that I mostly know Vergara as the actress that yells a lot on Modern Family (not a terrible thing, just limiting), I was very happy to see her really act in Chef.  She has a nice relationship with her ex, which may just be too ideal, but it works, given the tone of this film.  Having the help of friends Scarlett Johansson and Robert Downey, Jr. in small roles is a fine way to pad things out in the cast as well.  The real star of this film is the food though. 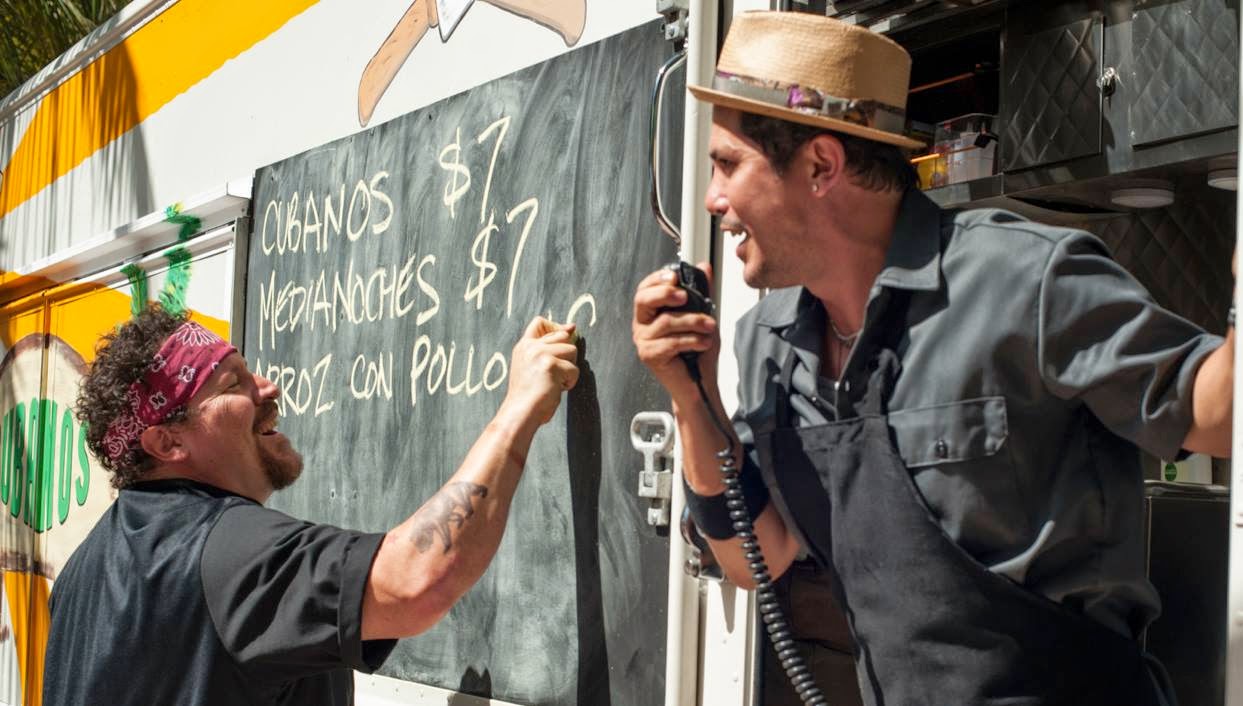 With assistance from renowned chef Roy Choi and some delectable cinematography provided by Kramer Morgenthau, Chef provides a depiction of the creation of some very tasty-looking dishes.  Filming on location in Miami, New Orleans, and Austin, among other places, watching Chef Casper and his team move across the country in this food truck and serve up dishes or taste food fitting of their setting is just about the most unfair thing possible to the audience, given how delicious everything looked.  Adding that aspect to a film that tries hard to show the real look and feel of a kitchen environment was a wonderful choice that does a lot of justice to the term ‘food porn’.

It only helps that the film is so enjoyable to watch.  The great cast and tasty food images are aided quite easily by Favreau’s very laid back and charming script.  This is not a film about villains and races against time, it exists as a character story about a guy who got caught up in something he is very good at, but could not do as great of a job as a husband and father.  Based on the film’s plotting, he gets the chance to relate to his son in the best way possible, by sharing his talents and bonding with him, because of it.  There is an easy flow to the story, which is maybe too easy in terms of where the film ends up in its final moments, but Chef does right by maintaining a soft heart to share with its audience. 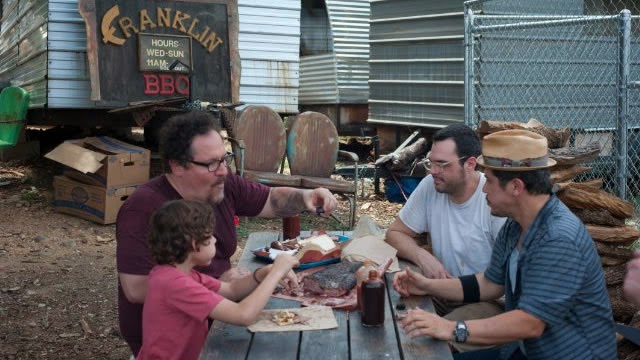 One can look at Chef and see it as Jon Favreau making parallels between himself and his career as a blockbuster filmmaker matched up against this chef character, who has suffered from some setbacks as a famous LA chef and wants to now do something more personal.  It is hard not to see this actually, given how Favreau wrote and directed this film, following the lukewarm response to his previous directorial attempt, Cowboys & Aliens.  Now Favreau has returned as a filmmaker producing a movie from the ground up and gaining lots of positive notice so far, because it is about proving expensive frills are not necessarily needed for him to make something incredibly creative and enjoyable.

The last thing I want to bring up is social media.  Chef manages to incorporate the rise of social media into its story and it is something I found to be quite creative, as the film is grounded in a certain level of reality due to it and it finds a way to make that feel natural.  As a charming comedy (with a fantastic soundtrack, by the way), Chef has plenty going for it to make it feel like a great time for audiences hitting up the movie theaters.  It is, however, a very small film.  In the same way that we see the food truck build up an audience thanks to Twitter, Vine, etc. this film will need plenty of support in that manner.  Thankfully, the impressive work from the cast, the great visual presentation of the food and locations in the film, and the very fun atmosphere that Chef creates can all play very well to possibly have this small film serve up some big successes.

Carl Casper:  I get to touch people’s lives with what I do and I love it; and I want to share this with you.