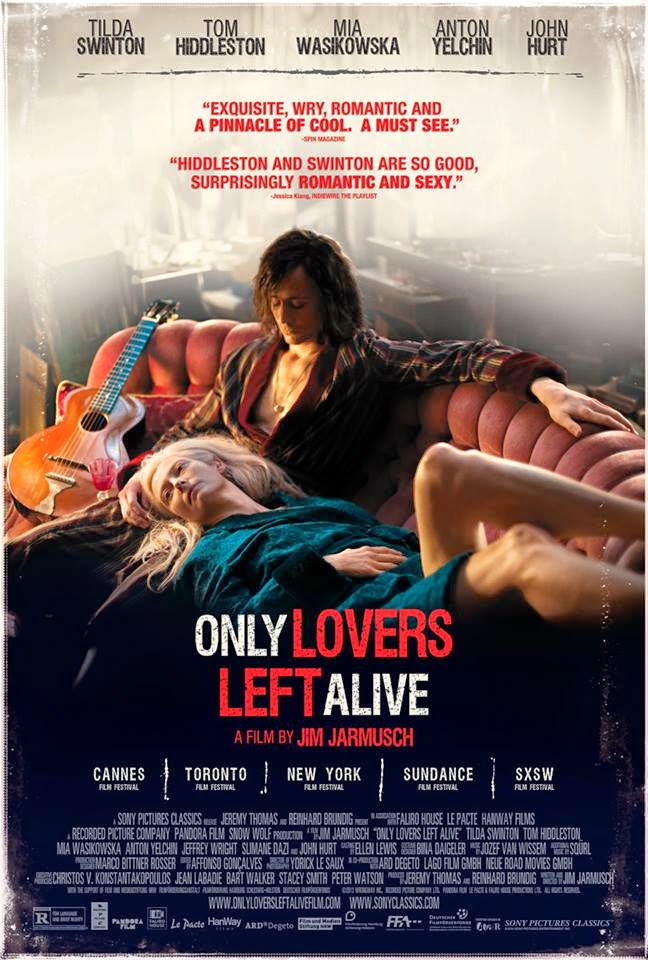 Eve:  That was visual.

It makes a lot of sense that indie filmmaker Jim Jarmusch has finally made a film about vampires.  He practically is one, given his height, slender and pale appearance, white hair, and the fact that he only pops up every so often to release a film into the night for the masses to find.  The fact that he doesn’t cast a shadow is a curious quality as well, but regardless, Only Lovers Left Alive is a rather brilliant film from a man with such a distinct style, making it easily one of the films I was happy to latch onto most in this early half of 2014.  Sure, this film does feature vampires, but that aspect is only used to add layers to the characters and forward the plot, which there is not much of.  True to Jarmusch’s style, the film is very minimal in traditional storytelling, but surreal in its presentation, and incredibly deft in the way it handles its two lead characters in this very unconventional love story. 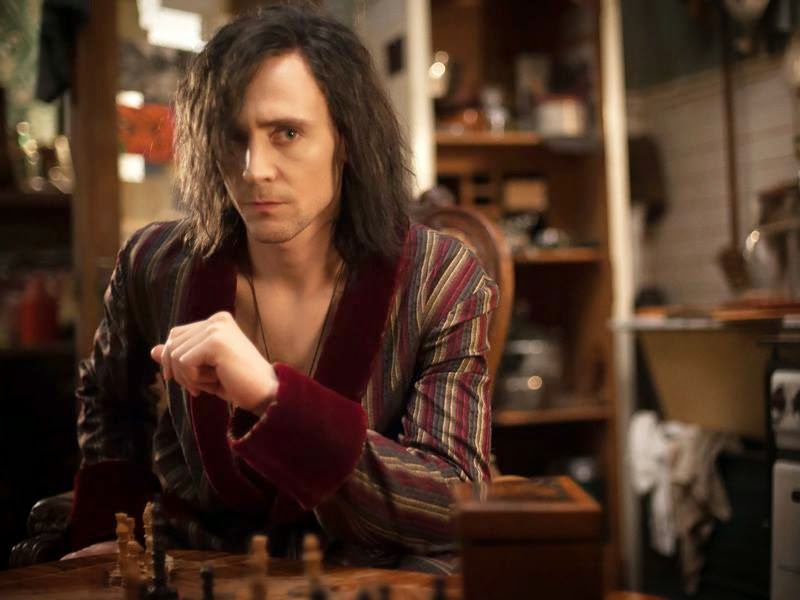 The setup is quite simple.  Tom Hiddleston is Adam, a vampire living in Detroit.  He has lived for centuries, influenced the careers of many famous scientists and musicians, but now lives as a reclusive rock star, recording music that very few get to hear and designing equipment and technology that is far more advanced than whatever anyone else is doing.  He survives on blood that he pays a doctor (Jeffrey Wright) to retrieve for him, with no questions asked.  Adam’s various weekly needs are supplied to him by Ian (Anton Yelchin), a simple enough kid with love for the music and mysteriousness that Adam adds to his life.  As Adam simply spends his time tinkering away in his secluded home and thinking about how humanity is essentially made up of “zombies” in this current time period, it is clear that depression may just get the better of him.  This is where Eve (Tilda Swinton) comes in.

From the outset, it is clear that Jarmusch is up to all his old tricks.  This is not a film that will be filled with tension, based on the fact that the two lead characters are vampires.  Only Lovers Left Behind is a deliberately paced meditation on life, completely fitting for the arthouse film world in the way it establishes a unique set of characters, a familiar setting that becomes alien based on the way Jarmusch films his scenes, and the way the actors are able to put forward Jarmusch’s voice in their performances.  Basically, if one is looking forward to seeing the traditional ideas surrounding vampires in media on display in this film, think again. 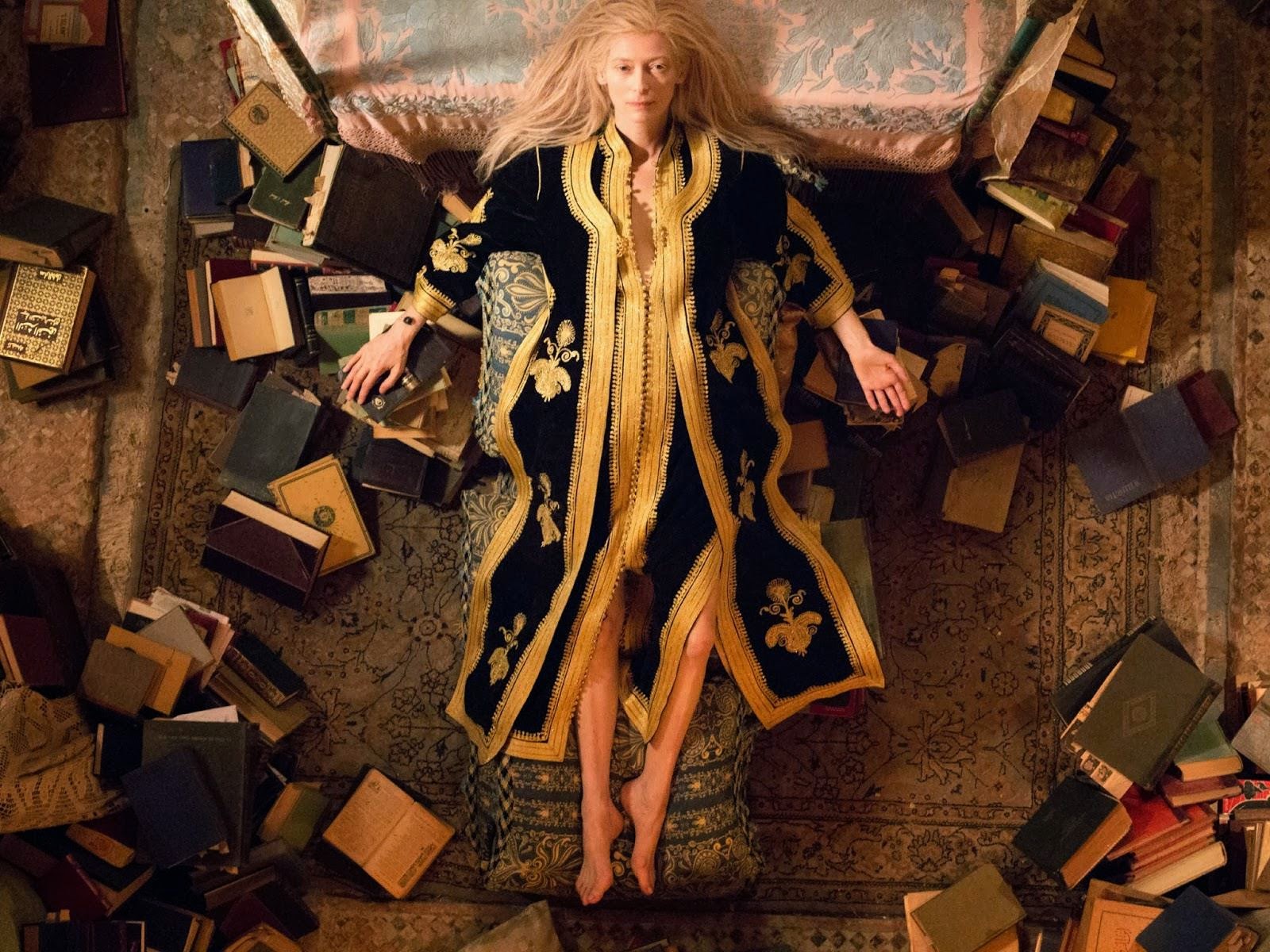 Most films surrounding vampires are happy to set their own rules regarding their depictions of this sort of supernatural being.  Only Lovers Left Alive does that to an extent to, with a heavy emphasis on intellect, possible clairvoyance, and a strong sense of weighing the times against what is proper and hip, as far as the abilities of these vampires goes.  While Jarmusch may have some very direct ideas and themes he wanted to get across, one also cannot overlook the way some literary references and films like the original Nosferatu are given a nod in the way this film looks, feels, and sounds.  Tone is a huge part of any Jarmusch film and is largely what works to make his filmography so unique.  Regardless of how engaging his films are (his last film, 2009’s The Limits of Control, surely tested the patience of even his biggest champions), they belong to a man with a very particular style that is recognizable in a way that many directors wish was true for them as well.

Taking things one step further in regards to tone, Tilda Swinton is genius casting as far as this film is concerned.  Already in a place where not much preparation must have been needed to portray herself as a vampire, Swinton shines in the role of Eve, Adam’s wife who travels away from her lovely den in Tangier in an effort to soothe her depressed husband’s soul (or whatever one would call it).  The establishing work done with her character is to suggest that she belongs in some kind of ultimate classy bohemian club, where she and her blood supplier, Marlowe (the wonderful John Hurt), simply experience life through sights and sounds, while reclining in their abodes adorned with clothing and decorations that are centuries old.  Swinton’s character, whether the camera watches her with hypnotic intentions or allows her to be much more playful with Adam, embodies the tone that Jarmusch is trying to achieve. 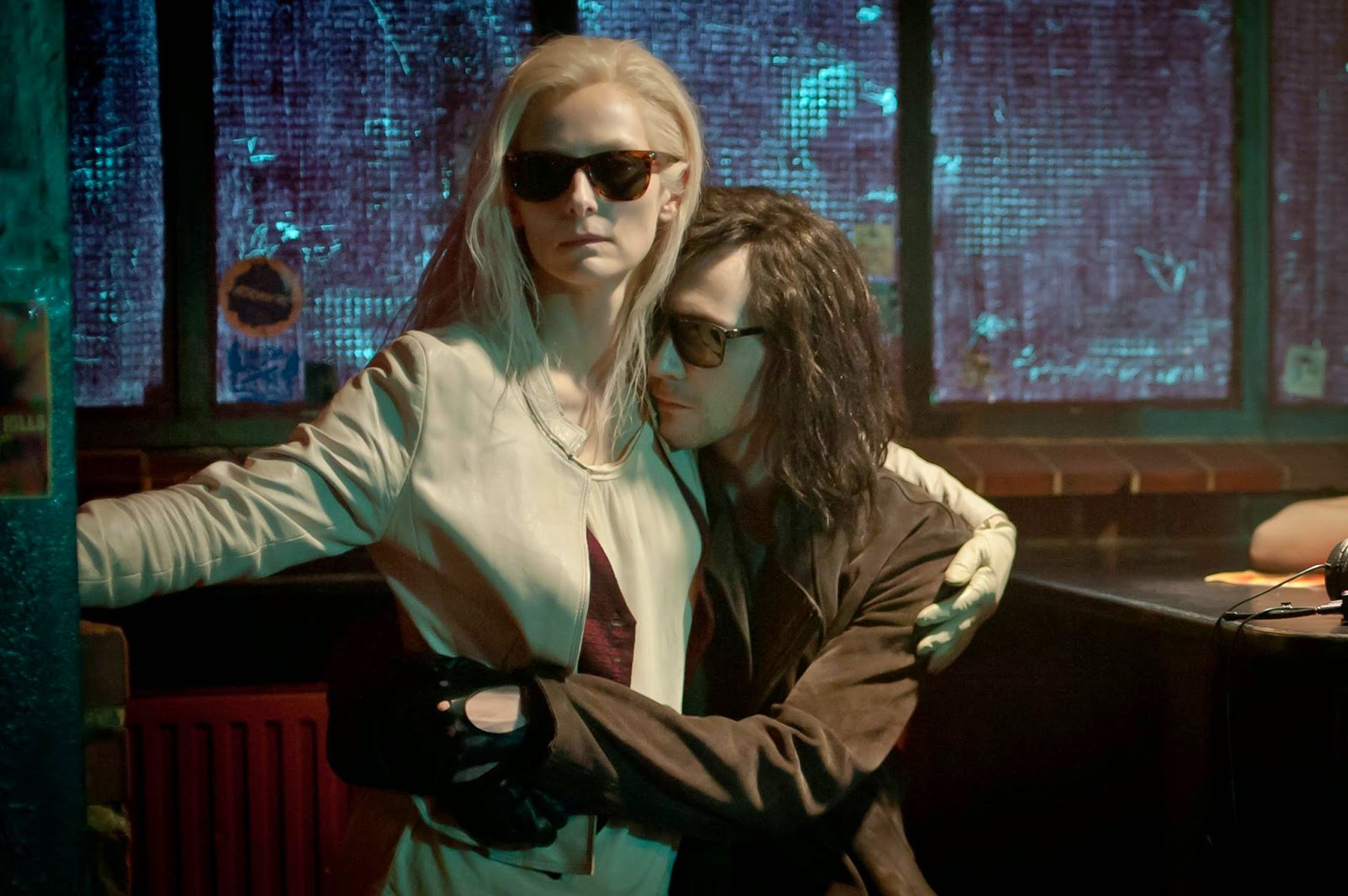 Once Adam and Eve do get together, the film has a level of spark to it, given the conversations they have, the implications made about their impact on the history of the world (there are a ton of fun little bonuses for those picking up on the lingo), and more.  This spark practically lights a fire once another vampire character becomes involved.  This is Ava (Mia Wasikowska), Eve’s younger “sister”, who Adam finds deplorable, but Eve insists on having around for a short time.  Ava’s actions are definitely construed to add momentum to the actual plotting of the film, but she also adds to who Adam and Eve are by involving herself in their lives for a short period of time and forcing them to react accordingly.

This is a weird film by the way, no doubt about that.  The best way to describe it would be a dark romantic comedy, as this is a film that has plenty of humor and is largely about the love shared between Adam and Eve, even while considering the unusual circumstances.  The film is more intriguing for the way it portrays them as exceptional outsiders, with a strong perception of humanity and how it has evolved over the centuries.  Still, the film is weird and will easily beguile those not prepared for what it has to offer, which is a moody character piece, buried inside of dryly humorous moments and a unique alternative rock score by Jozef Van Wissem and SQÜRL. 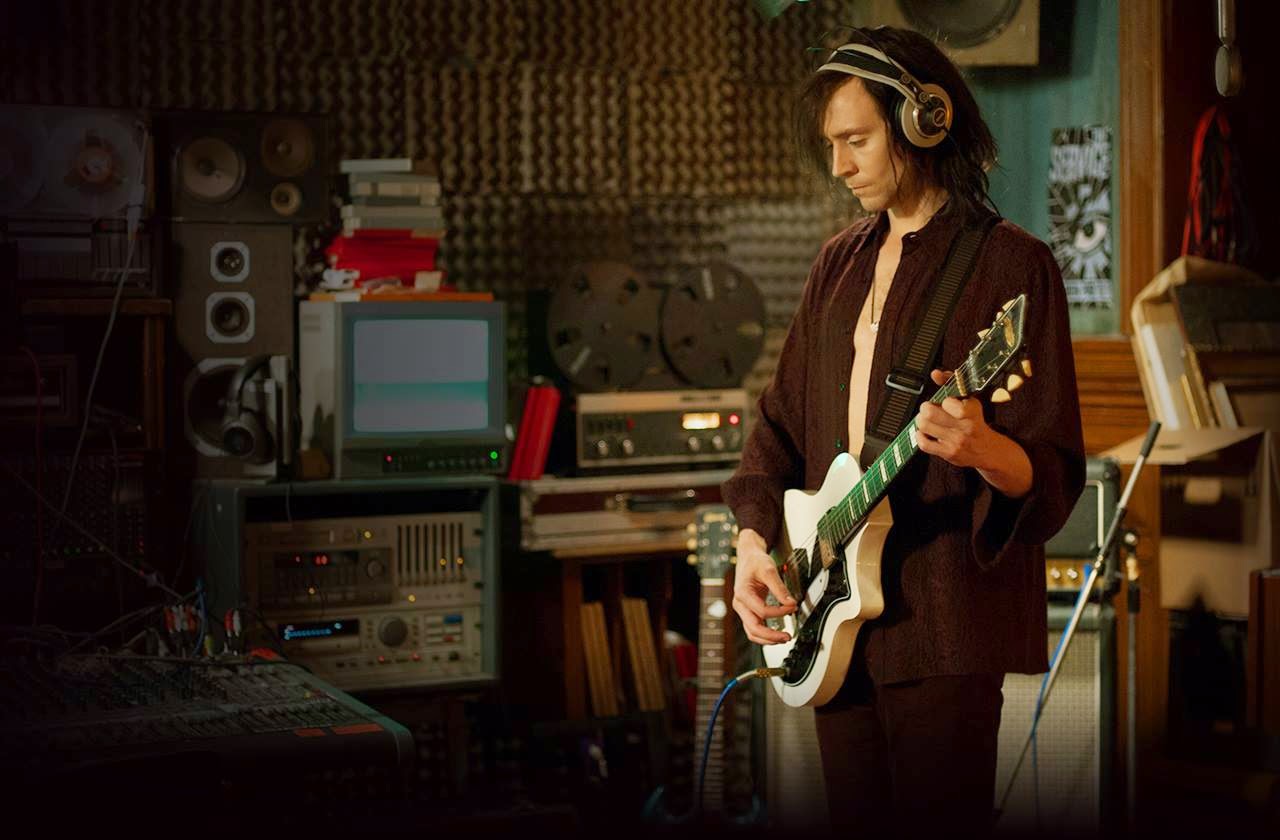 While not a traditional vampire film (thought the thought of Adam and Eve appearing in one would be quite the feature itself), those that enjoy this sort of subject matter for what it really amounts to – outsiders with a different perception of proper decorum, a different standard of elegance, and a whole other type of consideration in regards to the time of day one is most productive in, could find as much to enjoy about Only Lovers Left Alive as I did.  It is a small film that has a great focus on its tone and how to overload your senses with a unique visual and aural presentation.  It is wonderfully acted to the point where the love between said lovers is practically tangible.  It has a lot of what I like in these low-profile films that may or may not breakout, but even if it doesn’t, I was very pleased to rise a bit above the other zombies in the eyes of Adam and Eve to extend my gratitude.

Adam:  Look what she did to my Gibson. 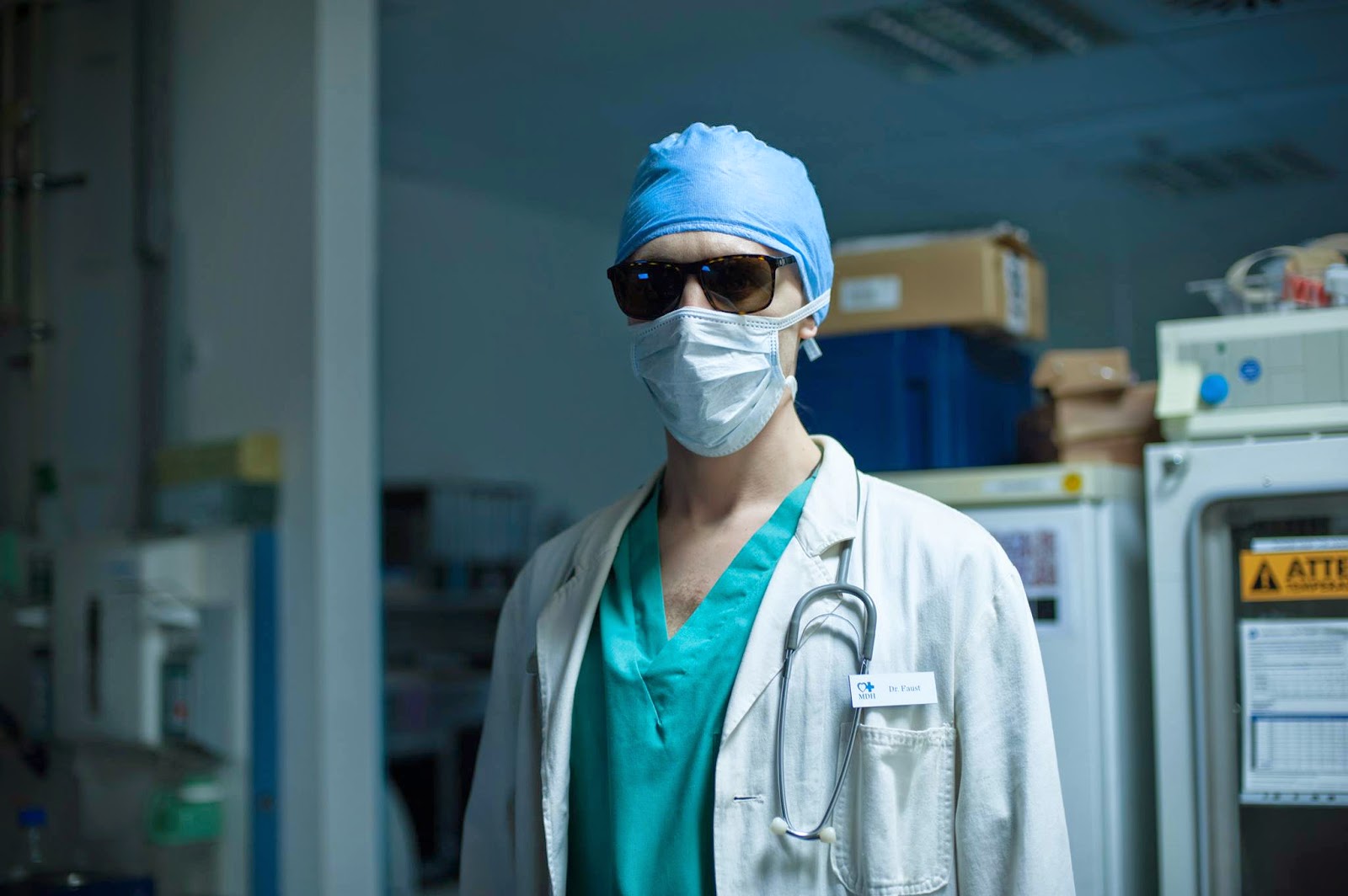 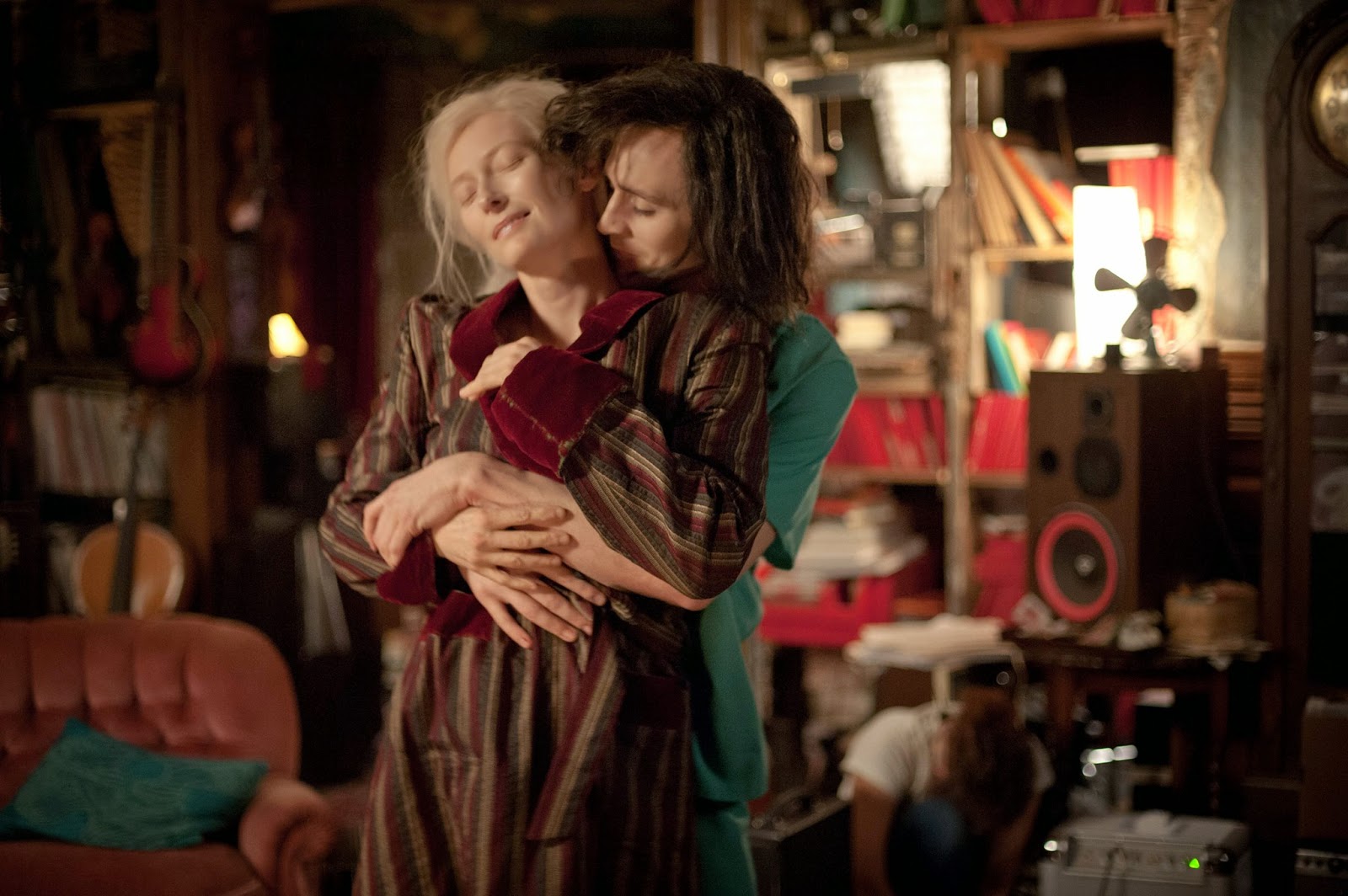 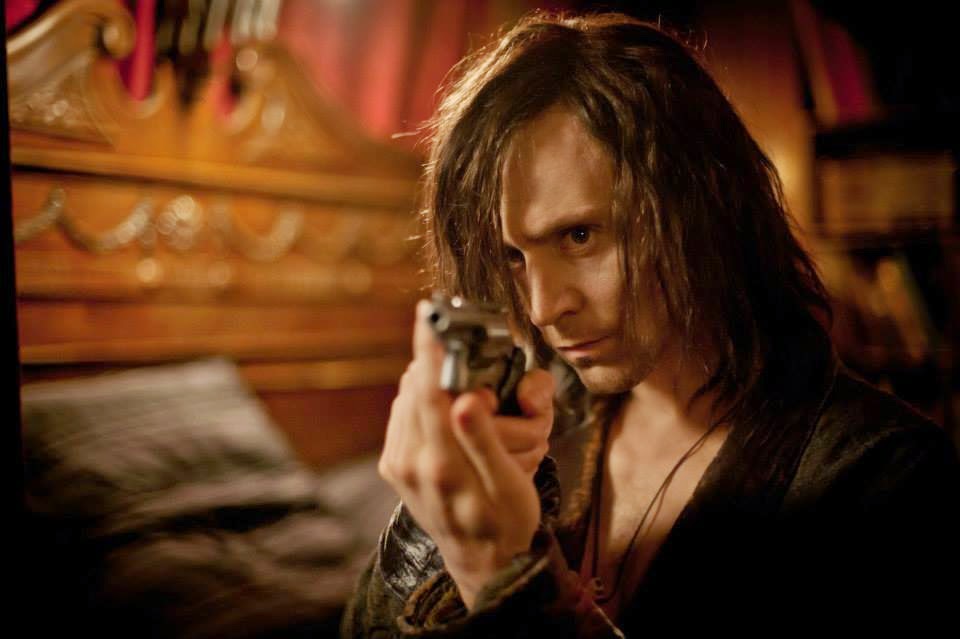