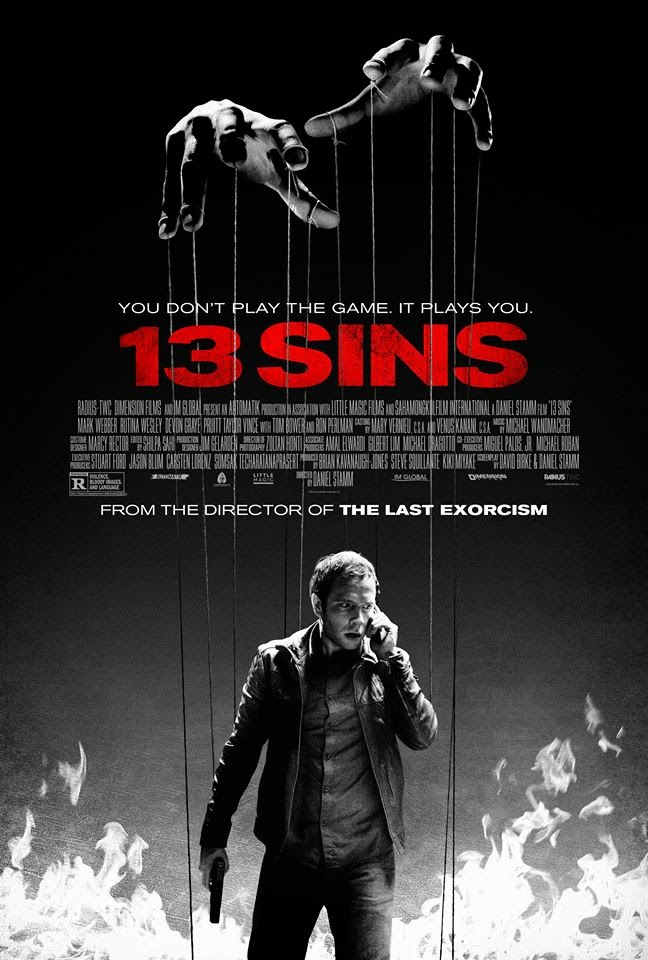 I really enjoy putting my reviews together.  I honestly wish I could delve deeper into certain movies, but alas, I get incredibly busy and can sometimes only deal with movies to a briefer extent than I would prefer.  This is why I write these occasional "Brief Thoughts" posts on movies I have seen, as I want to at least offer some of my own perspective on them.  They may not be as polished, but I can at least get my opinions out there.  This "Brief Thoughts" post is a review of the film 13 Sins, currently on VOD.

Based on the recommendation of friend and mediocre, yet secretly brilliant film critic Scott Mendelson (find his work on Forbes HERE), I sought out the film 13 Sins, which is currently streaming on VOD.  I was interested, having just recently watched the dark comedy/thriller Cheap Thriller and being let in on the fact that 13 Sins has some connections.  Along with starring Mark Webber, who has been climbing the ranks as far as low profile actors I look forward to seeing more of and an always welcome supporting role by Ron Perlman, this film had my attention and I was happy to have checked it out overall, even if Cheap Thrills still works a bit better overall for me (basically just see both movies, if you want a twisted good time, but be sure to watch them with an audience or friends, if possible).

The premise is fairly straightforward.  Mark Webber stars as Elliot, a decent guy with a pregnant fiance (True Blood's Rutina Wesley) and some serious debt.  Having just lost his job, things could not be worse for him, but their may be someone looking out for him...in a very twisted way.  Elliot receives a mysterious phone call informing him that he is in a game of hidden cameras, where he must perform 13 tasks to receive a cash prize of millions of dollars.  The tasks start off simple enough, move into embarrassing territory, and then turn into major felonies.  Elliot's determination keeps him going though, even if it means degrading himself and stretching the levels or morality to their thinnest. 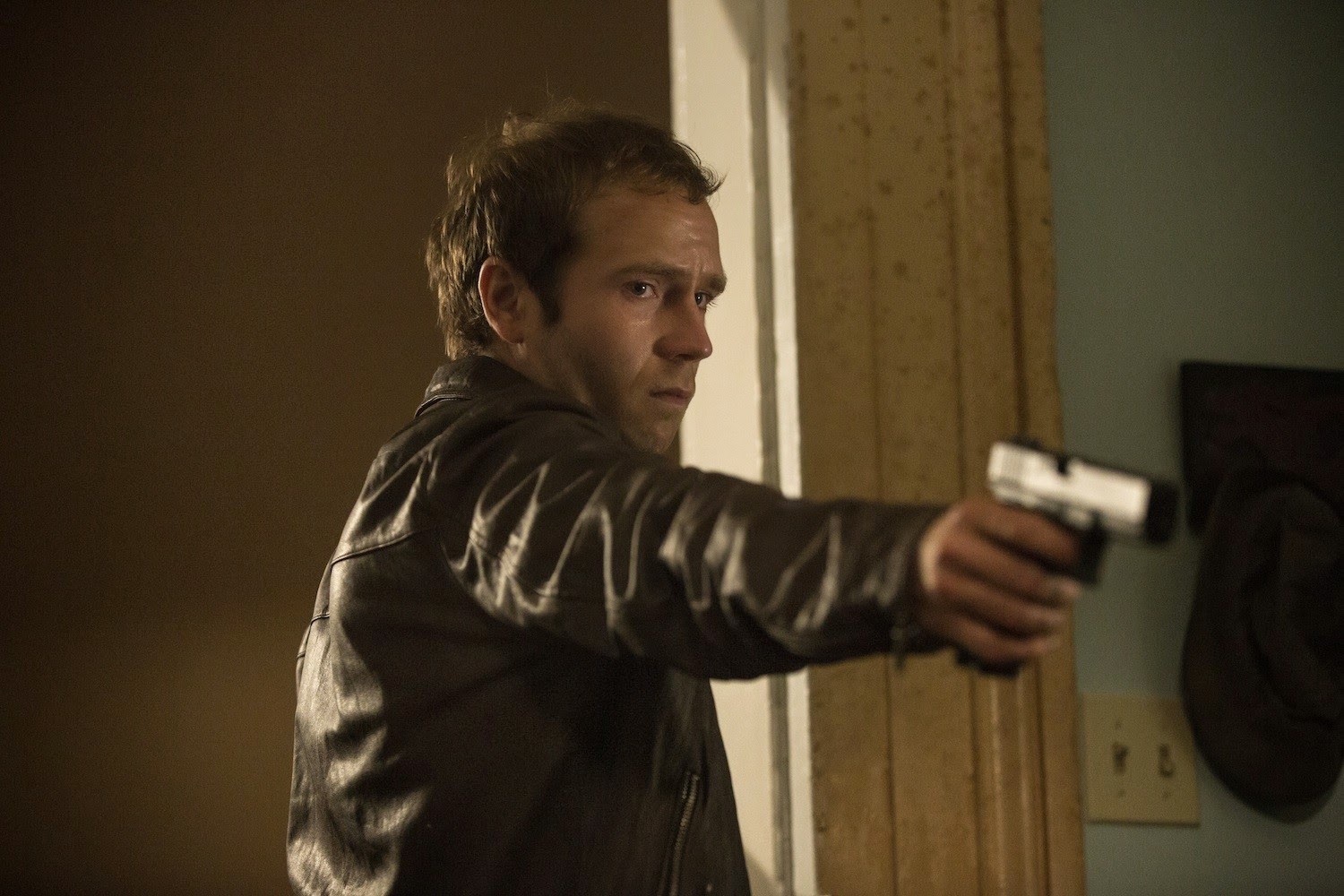 I got the most enjoyment out of the frantic pacing found in this film.  It definitely stretches the limits of believability, but working as this sort of cross between Phone Booth and David Fincher's The Game, 13 Sins can be a lot of fun, simply due to how it never lets up.  It helps that I am already a fan of Webber.  I think he manages to sell the desperation of the character, while also playing up the silly nature of the film, as it gets more and more ridiculous, despite the stakes becoming deadlier and deadlier.

The film definitely falls into a trap of trying to make you not think about things, or else the premise could come shattering down around you, but it has a sort of cheat up its sleeve by giving the audience reason to believe that a supernatural element is at play.  In that way, the film becomes similar to something like Cube, where a grand overseer and the possibility of future exploration of the mechanics of the game in possible DTV sequels could retroactively make this film better, but that doesn't mean I can automatically like it more, based on speculation and the way my mind works.

It is due to these reasons that make me enjoy the much more grounded Cheap Thrills more, as that film is much better acted and exists in a more probable reality.  The stakes are more tangible to an extent and while it relies on less exploration in terms of settings, it provides some interesting character analysis, in the midst of being a very darkly funny film.  I also think the ending is much stronger.  Still, 13 Sins has its own way of operating, which I found to be enjoyable.

There has been an embarrassment of riches available on VOD lately and 13 Sins certainly falls into that category.  Check it out if you want a fun, somewhat violent, dark comedy/thriller.  It's a fun little ride. 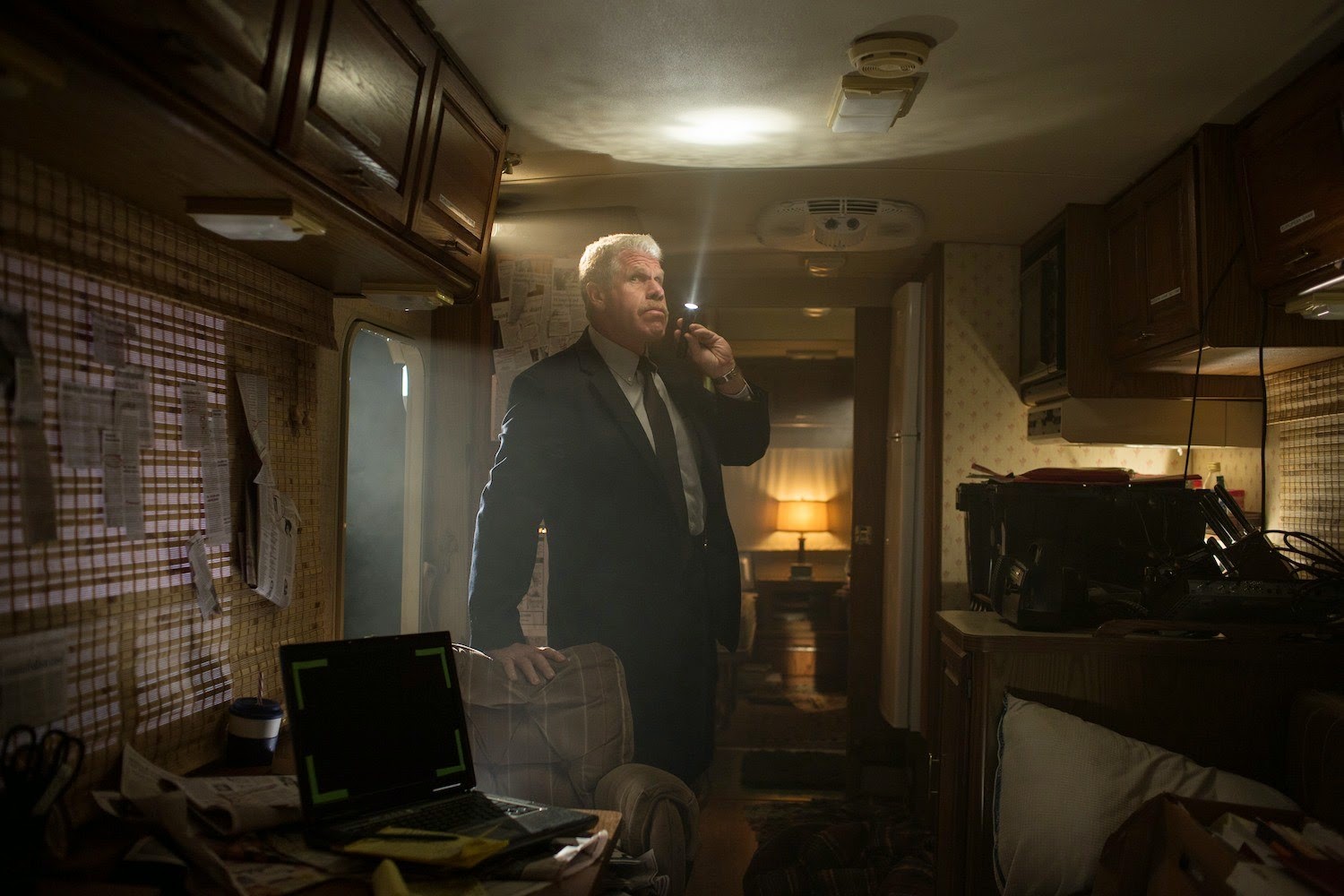