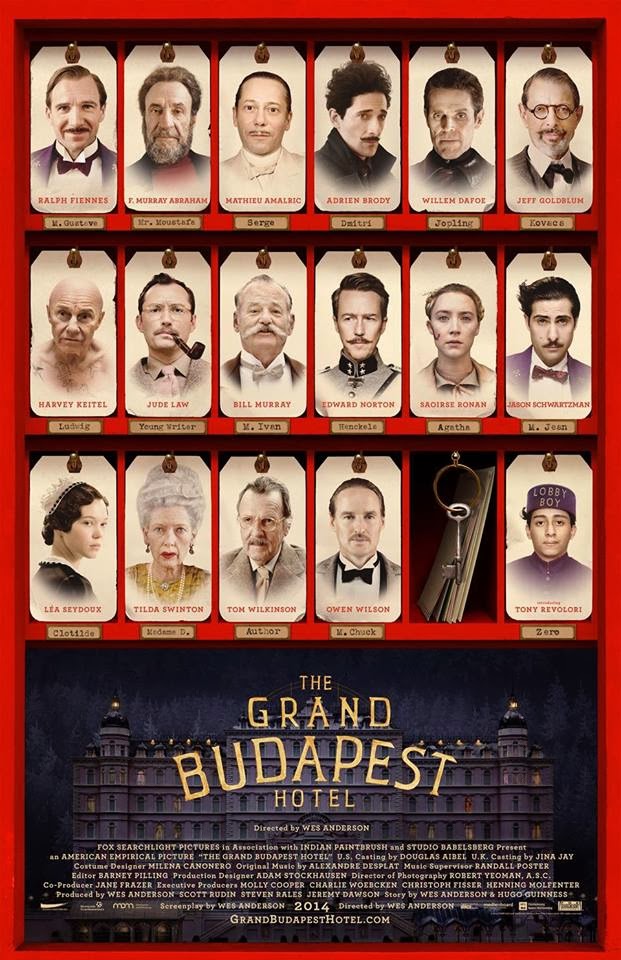 Gustave:  Get your hands off my lobby boy!

The Grand Budapest Hotel is a film not only packed with characters, sets, costumes, and all the things that tend to typify writer/director Wes Anderson’s style, it is also packed with story.  It is becoming more and more clear to me how much Anderson enjoys having films that are about stories being told to an audience.  There are frequent themes that have been present in Anderson’s other films, namely family, which is clearly seen in The Royal Tenenbaums, The Life Aquatic, Fantastic Mr. Fox and all of his other films as well, which is all well and good, but The Grand Budapest Hotel really goes out of its way to show us that it is a story within a story that is being told to another person.  The result is a film that finds a way to present something that will be entirely familiar to everyone who recognizes Anderson’s style, but ends up feeling like a comment on storytelling itself.  The film combines multiple genres in a rather go-for-broke fashion, while still finding the time to be thoughtful in regards to its key characters, and does not let narrative constraint get in the way. 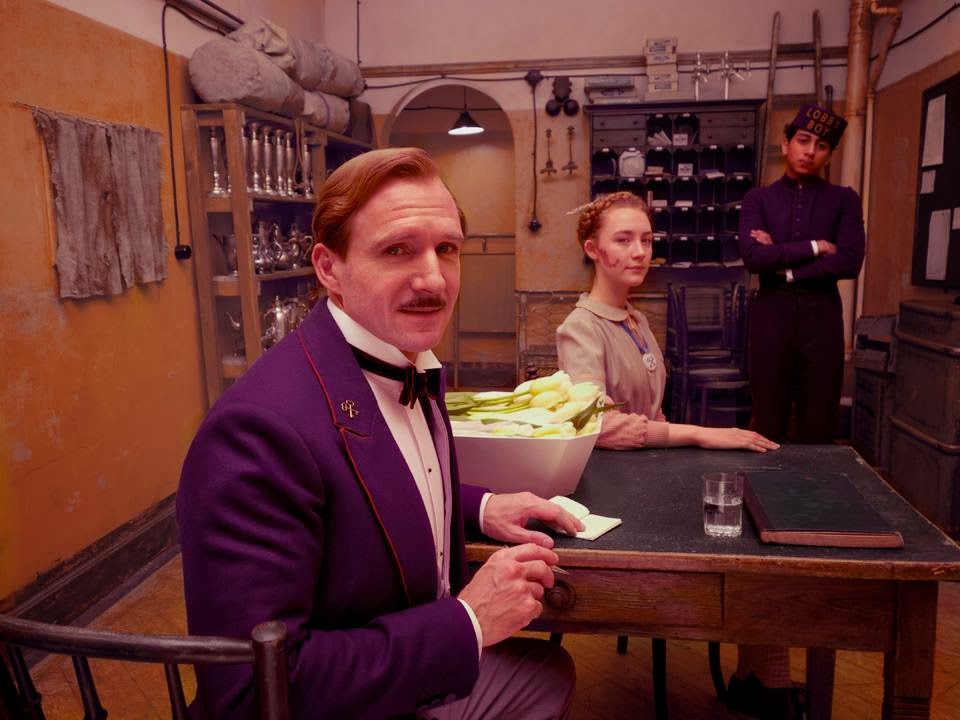 A number of layers are peeled back in order to get to the main storyline, as the film uses a framework the takes us further and further back in time, as we realize we are watching the story of someone reading in a book, which is about another person being told about events from the past.  That is a complicated statement, but so is the film’s approach to getting to its core plot, which is about a dazzling hotel concierge and his faithful lobby boy.  Ralph Fiennes stars as Gustave H., the concierge who is a hit with the staff and all of the guests (mainly the older women) in a hotel located in the fictional Republic of Zubrowka.  Tony Revolori plays the lobby boy, Zero, who basically serves as Gustave’s right-hand man, even after a series of events leads to Gustave’s imprisonment and subsequent prison escape, as he goes on an adventure to prove his innocence.

Anderson is not interested in making this a story of epic proportions, as the film barely lasts more than 90 minutes, but he does pack the cast with a large number of players, many of whom have been featured in his 7 previous films.  Something about this all works though.  The communal experience that came with the production of this film practically suggests that this cast is more of an acting troupe.  Familiar faces do not feel like the film is winking at you, but rather allowing you to enjoy the return of certain favorites like Bill Murray or Owen Wilson for a time, before turning over to other favorites or new members like Fiennes or young Saoirse Ronan, who plays a baker’s assistant and Zero’s love interest.  It does not hurt that every performance does feel spot on, with Fiennes, in particular, really delivering in full on his deft and quite charming character. 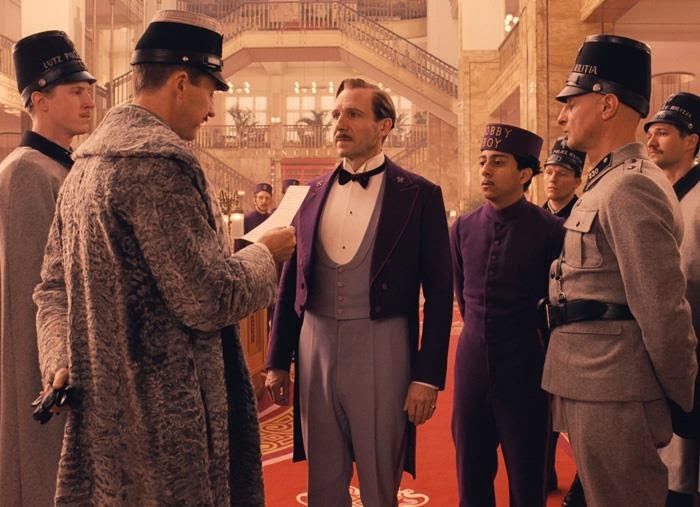 I actually do find it interesting that Anderson has been able to get to this point where he can have a high level of talent that also includes Edward Norton, Adrian Brody, Willem Dafoe, Jeff Goldblum, Harvey Keitel, and Tilda Swinton, among others, simply show up for a time, deliver what is required of them, and simply exit the film.  I would imagine it takes a great amount of comfort as a director to manage that kind of task, while still allowing for a film that respects its characters enough for you to care about the plights that matter most, without discounting the effort put into even the most minimal of roles.  All of that and The Grand Budapest Hotel still has plenty of style to go with the character-based comedy/drama on display.

Wes Anderson has always been able to create unique worlds in his films.  While his screenplays have a dry sense of humor in the dialogue to go along with the very autumn-themed and idiosyncratic presentation of his settings, which have led to some not quite caring for all of his features in the same way I seem to have, it continues to tap into what works for Anderson as a storyteller.  Just as authors have particular writing styles, Anderson uses his filmmaking sensibilities to inform the nature of The Grand Budapest Hotel.  The hotel itself features very specific colors, decorations, costumes, and more to provide it with an identity.  The screwball/adventure/caper nature of the story allows for Anderson to utilize old fashion filmmaking techniques to communicate some of the action taking place on screen in a way that is fitting for this film, as well as the ones he has drawn inspiration from.  I find a sense of fun in all of this.  Even as the story progresses and we learn enough about certain characters to realize that the overarching story has an eventual sadness to it all, the concept of life being an adventure, which is very akin to something explored in Anderson’s film The Life Aquatic, stands as a fine reason for me to get behind a film that has a specific style, but one that does not outweigh the character-based story being told. 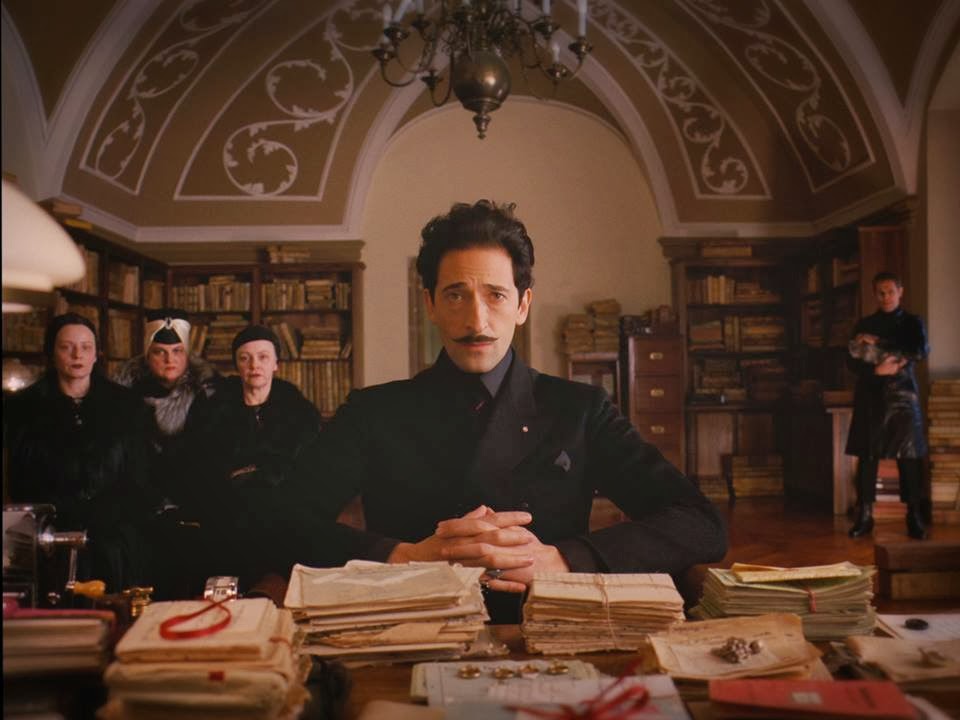 As far as basic entertainment value goes, the film is likely going to be less accessible to those who are not rampant Wes Anderson fans, but it has a large enough cast to hopefully engage general audiences and ideally prove me wrong.  While I found Anderson’s previous film, Moonrise Kingdom, to be one of his most accessible features, The Grand Budapest Hotel has a certain wackiness to it, which may or may not hold it back from a larger embrace.  That said, there is a lot of humor in this film, which aids this large cast and sprawling story.  There is ambition to be found in the way this film moves through different timelines (signaled by the shifting aspect ratios) and approaches its more adventure-based scenarios, such as a high speed chase down a mountain or the aforementioned prison escape.  Along with the playful score by Alexandre Desplat, the film has certainly attempted to be as all-encompassing as it can, when it comes to presenting a visual feast for the eyes, backed up by lots of actors all game for Wes Anderson’s style of fun.

Getting back to this being a film about a story being told within a story, The Grand Budapest Hotel manages to get through its narrative layers and tell a key story that is a mix of all sorts of genres and motifs, but still effectively well done.  The film finds a way to have its characters contradict themselves in ways that make them all the more humorous, while also layering in the profound aspects of a friendship that becomes embroiled in innocent romance, villainous treachery, and even the political state of affairs regarding the country the characters occupy.  The film is a triumph in the way it finds balance in all of this.  The Grand Budapest Hotel is a beautifully shot, beautifully made film, with performance tuned right into what Wes Anderson knows how to deliver upon, especially in this level of comfort, which is evident in the confidence of his direction that is on display.  I tend to rewatch Anderson’s films a lot and The Grand Budapest Hotel is one that I will likely find myself checking into quite often.

Gustave:  I approve of this union. 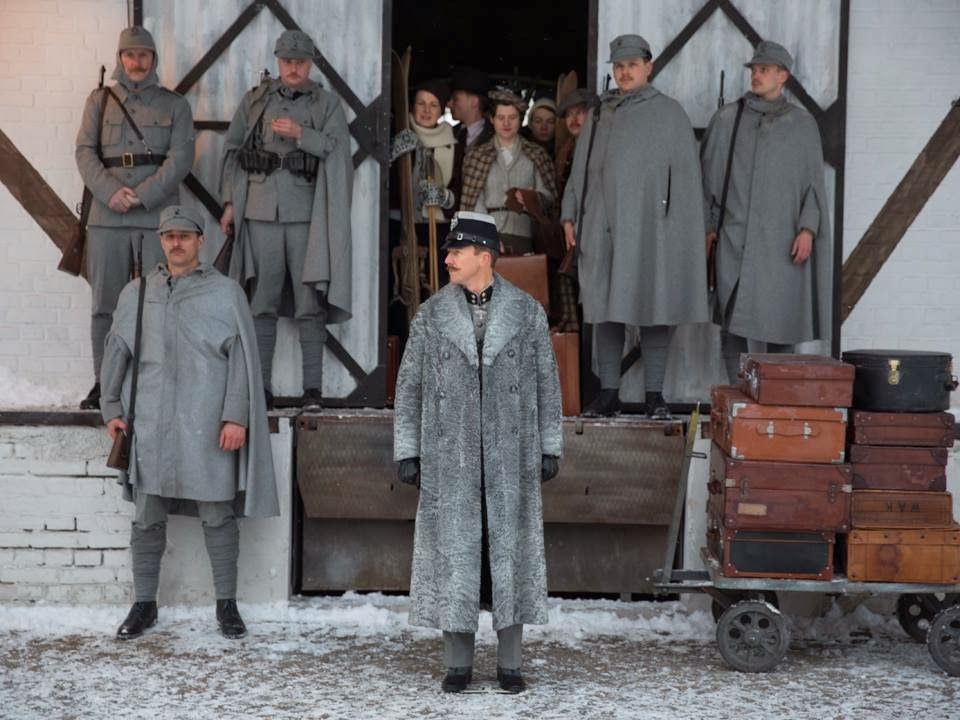 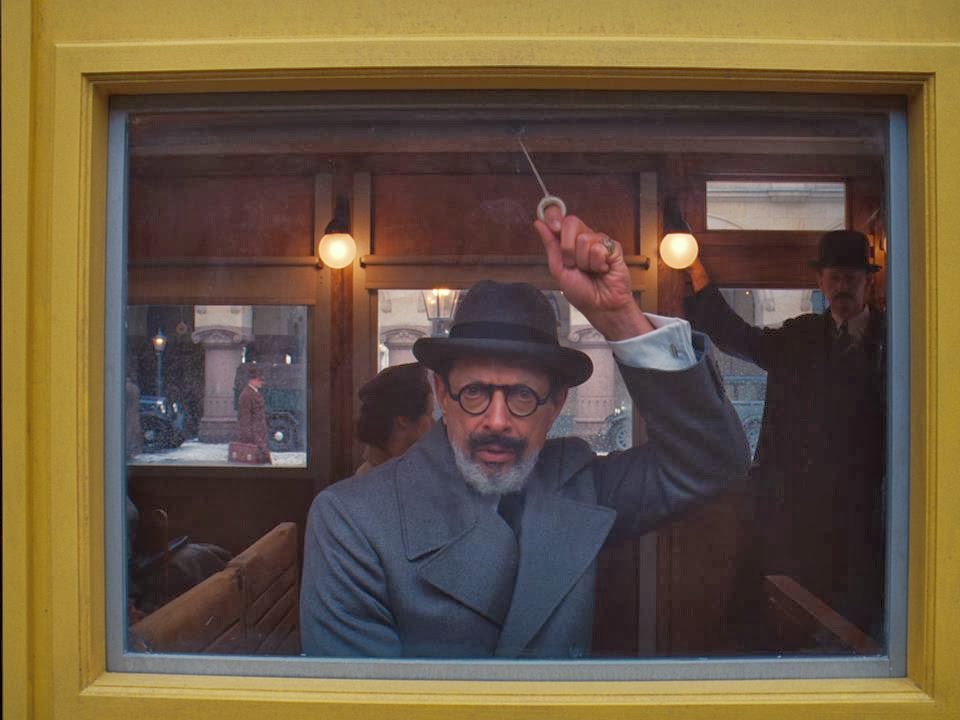 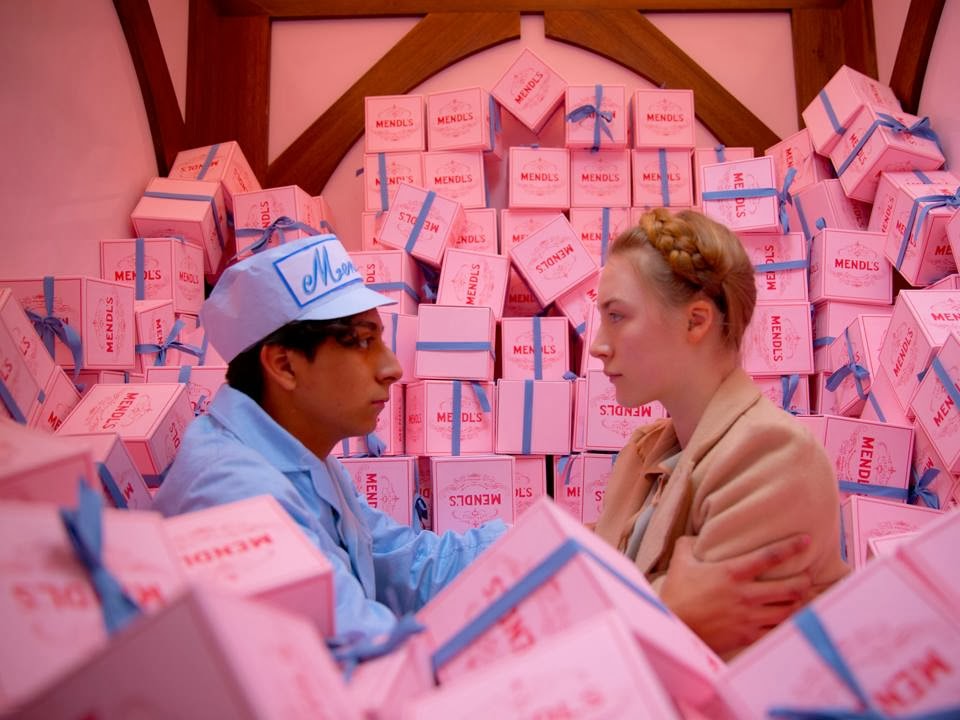 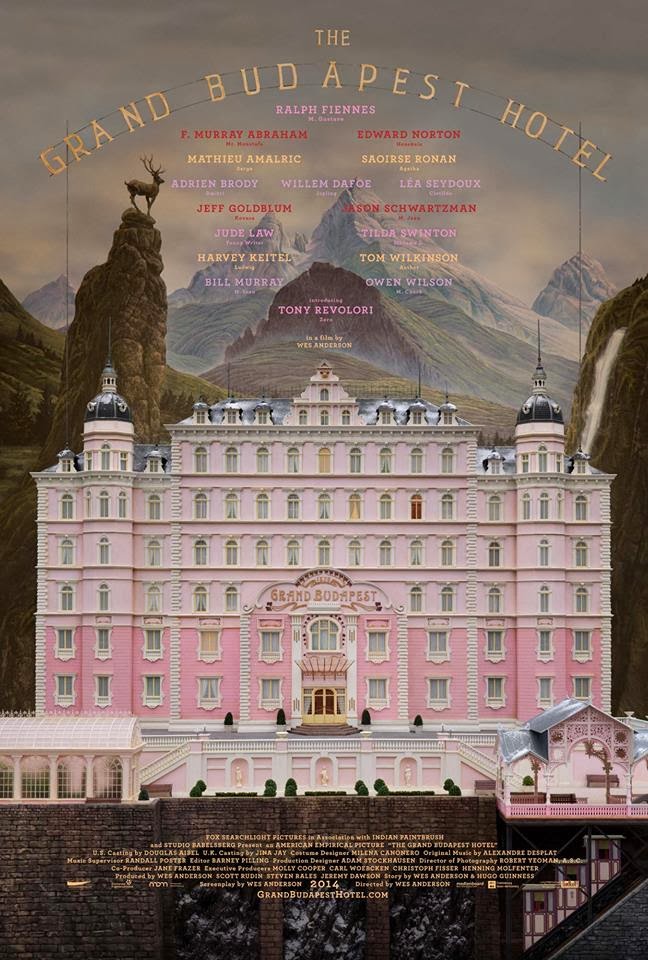