‘Sabotage’ Has Been Breached (Movie Review) 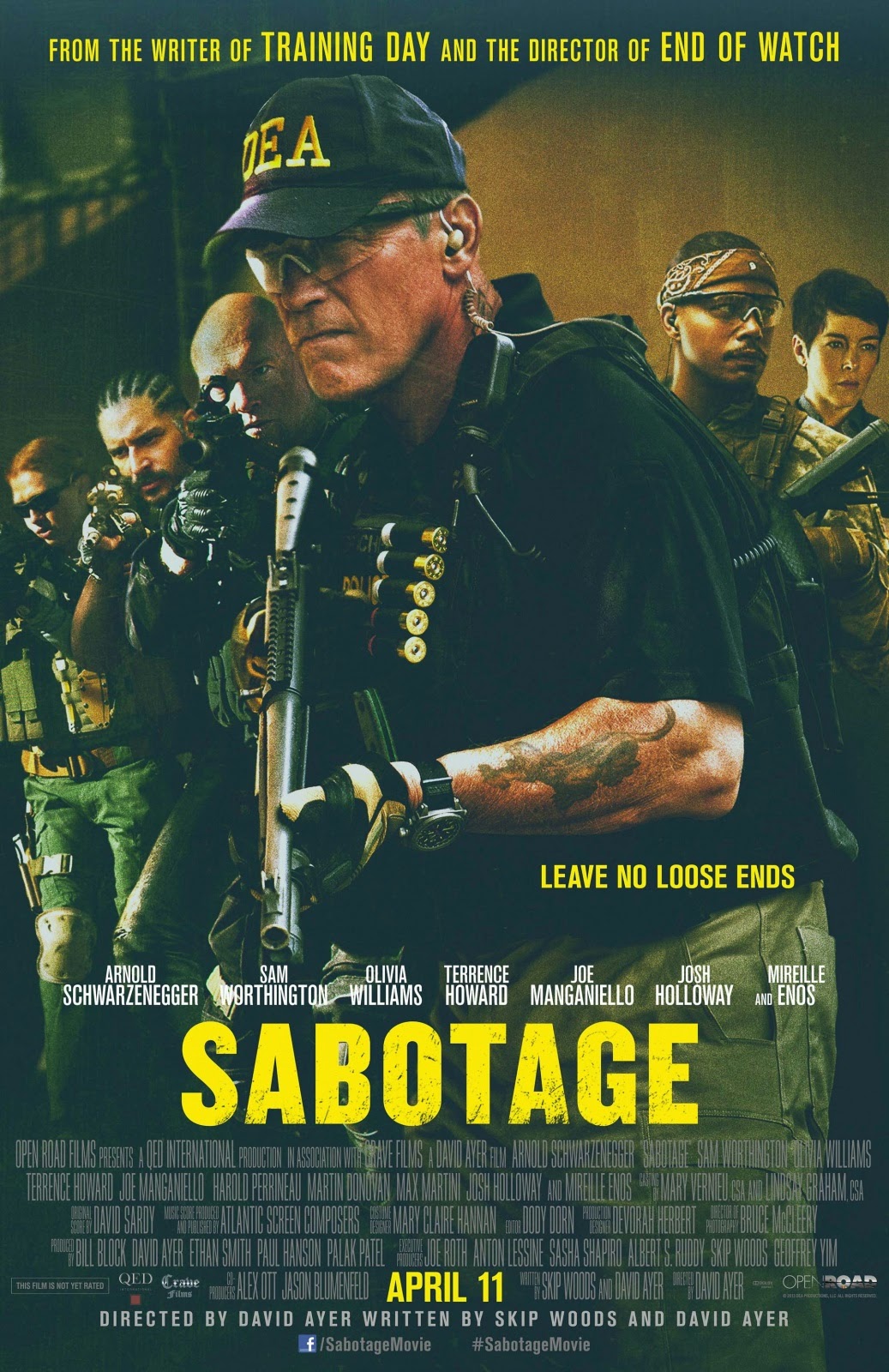 Sugar:  Some of us are getting paid, the rest of us are just getting dead.

Sabotage is a nasty little thriller from writer/director David Ayer (Training Day, End of Watch), which stars Arnold Schwarzenegger in another leading action movie role, following his term as Governor.  The film is getting its share of notice for having a plot that feels akin to an Agatha Christie-styled whodunit, as it revolves around Arnold’s team of DEA agents being murdered one by one.  It is just too bad that this whodunit has all the intelligence of the script for I Still Know What You Did Last Summer.  Sabotage is a big waste of talent, resources, and time. 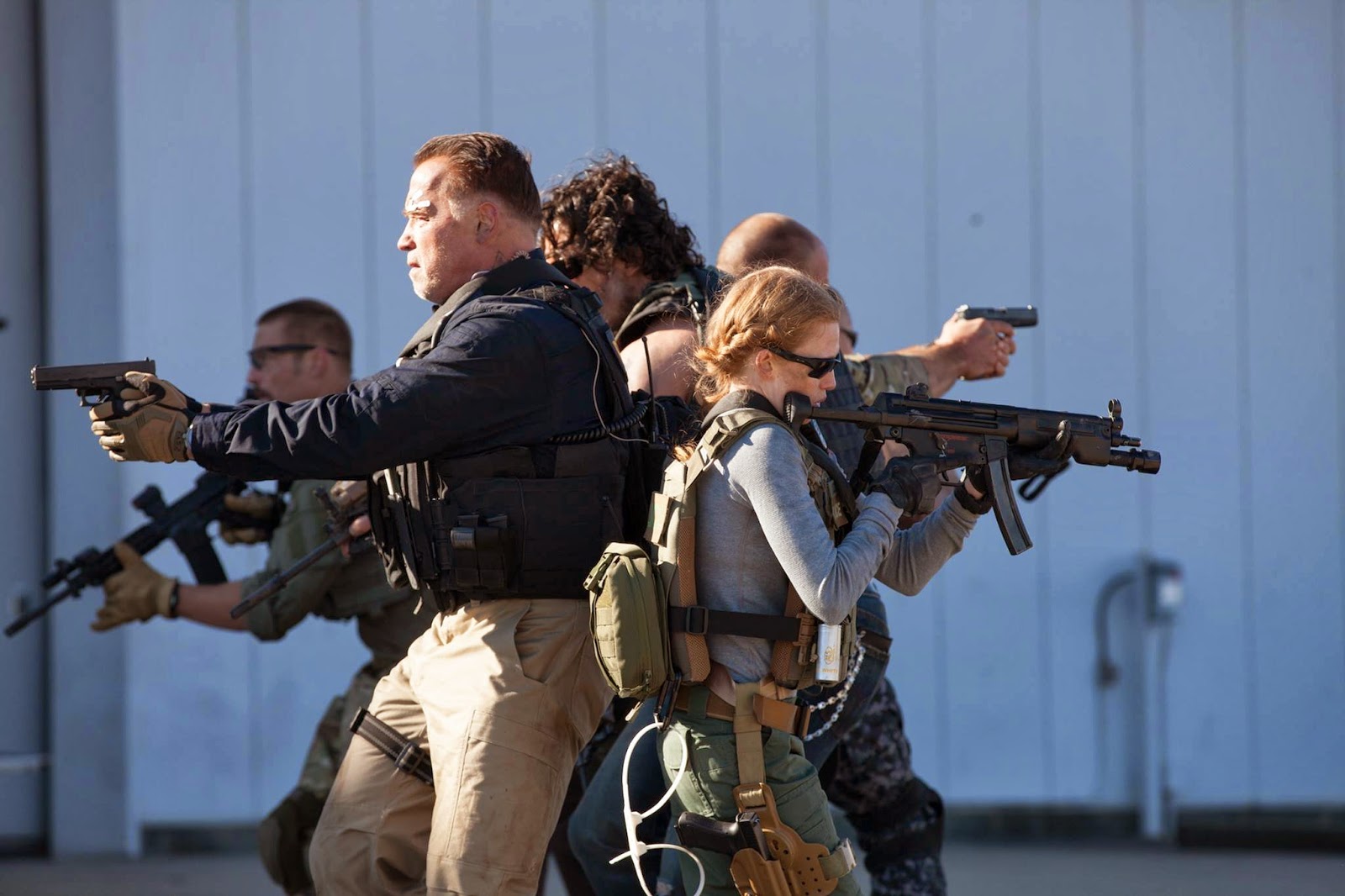 Schwarzenegger is John “Breacher” Wharton, the leader of an elite team of DEA operatives.  This team includes a bunch of annoying and deplorable people that have names like Pyro, Tripod, Sugar, and Grinder.  After one drug bust in particular, where Breacher and his team are up to no good, only to fail in their side-mission and be investigated for it, team members start being murdered one by one.  Breacher is obviously concerned for the safety of his team, as he partners up with homicide investigator Caroline Brentwood (Olivia Williams) in an effort to figure out who is behind all this.

The film features a number of cast members who are all wearing different types of facial hair and hair styles.  Arnold is donning a haircut where all sides are shaved up and he has a strange part in his hair on top.  Sam Worthington has decided to go bald, with a braided goatee.  Joe Manganiello has chosen corn rows.  Terrance Howard has reverted back to his Hustle & Flow look.  Josh Holloway is rocking a big mustache.  Olivia Williams went ahead and cut her hair short, which is just as strange as listening to her American accent.  I say all this, because the hair styles are about the most interesting thing to be found in the film. 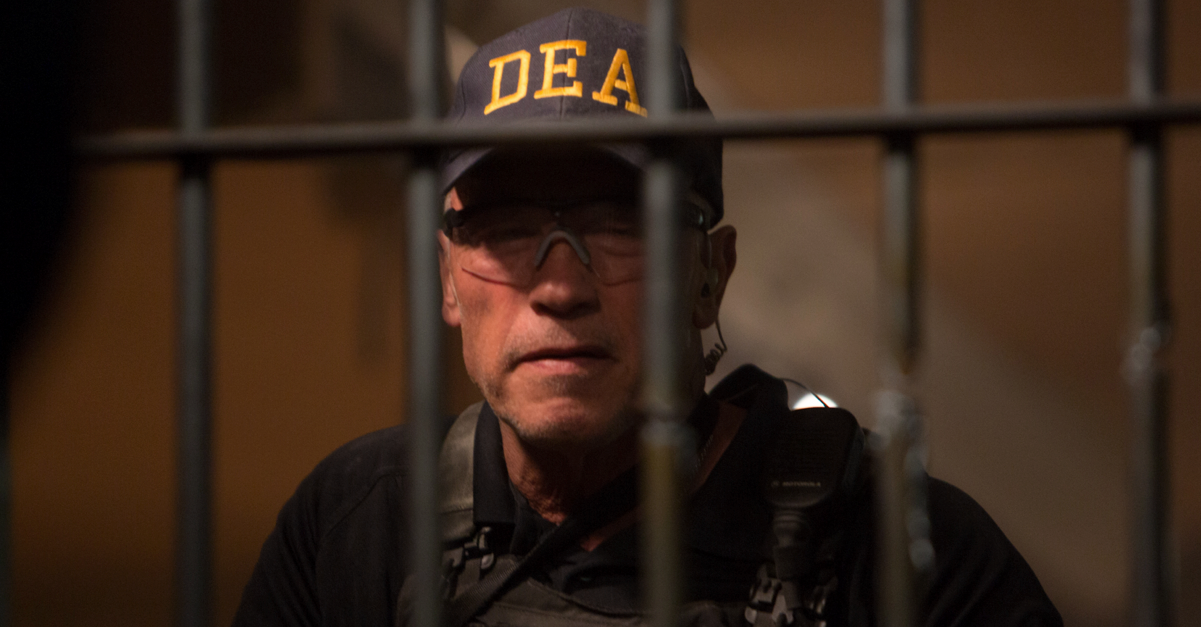 Originally written by Skip Wood (writer of A Good Day to Die Hard aka the worst film of 2013, among other bad scripts), before being reworked into something that apparently must have been better, David Ayer had a neat gimmick to make a film out of and has decided to turn out a film that is focused heavily on skilled shooters taking down drug dealers and hitmen, really disgusting execution scenes, and the strange dedication to having audiences watch realistic breaches on rooms with potential criminal activity.  Why this film has decided to combine Se7en with Call of Duty was almost as confusing as the plot itself, which revolves around characters acting like a bunch of idiots, while they wait for either their next team member to be killed or be killed themselves.

Unfortunately, the cast does not add much to make things any better.  Schwarzenegger certainly seems game to play along with his rowdy crew, but it is clear that the film enjoys improved banter between all the guys and Arnold very clearly does not possess those skills.  Almost all of the guys bring nothing to the proceedings as well, with Terrance Howard practically standing with one foot out the door due to boredom and disinterest, while Sam Worthington apparently regressed in his years since being a new kid on the action block with Avatar and Terminator Salvation, given how much worse he has gotten at using accents. 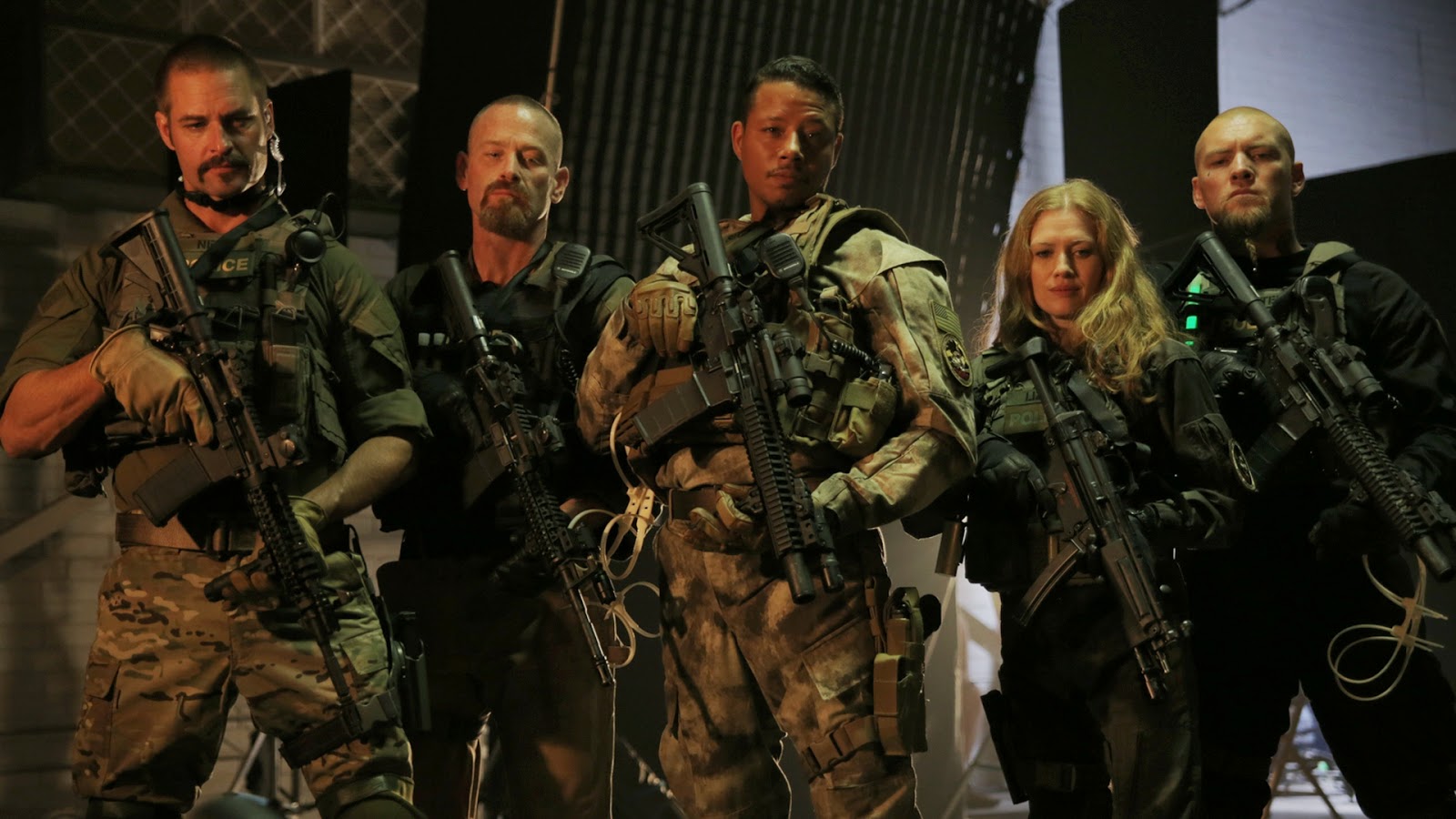 It would maybe be nice to point out how two female characters got to play with the big boys and be treated as equals, given their status as a DEA operative and a homicide detective.  That is all well and good, except Mireille Enos (of The Killing) gets to play the woman who also has drug problems and is the butt of most of the guys’ jokes, despite holding her own when it comes to gun fights.  Olivia Williams is at least a character that speaks and acts in ways that mostly make sense (I could easily watch a better movie involving her and her partner played by Harold Parrineau), until she is somehow overcome enough by Arnold’s charm to initiate operation sex dive with him.

The gender roles are not even all that angering, given how I had no compassion for any of these characters.  If the film wanted to be a slice of gritty 70s filmmaking, an 80s action-fest, or a 90s dark procedural thriller, I would have been fine, but Sabotage wants to be all three plus modern in its inexplicable use of GoPro cameras to make guns look ‘cooler’ combined with some shaky cam elements and rapid editing in some of the larger action sequences.  It is a messy-looking movie on to of an already messy script, with a real penchant for getting caught up in the blood deaths of many. 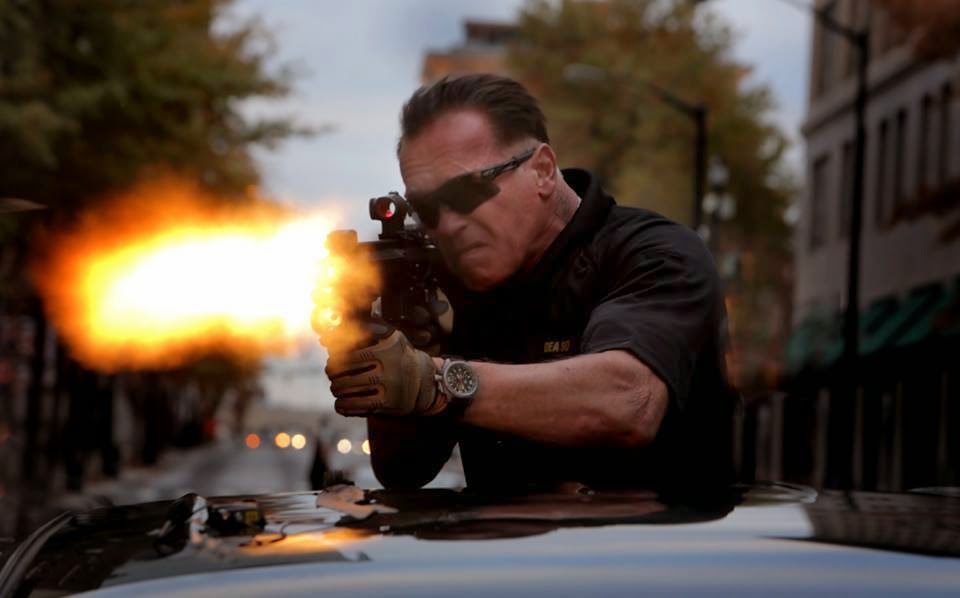 All of this and the film has an annoyingly good coda.  The film provides details about Breacher throughout and the final scenes of this film get into the payoff of those details.  The result is a much more confident piece of filmmaking, practically suggesting that Arnold could have had something akin to Eastwood’s Unforgiven if everything was made a bit differently and was, y’know, much better accomplished overall.  Instead, I sat through a crappy movie with a cherry on top.

Sabotage is a step down from David Ayer’s previous film End of Watch, which was a fantastic cop film all-around.  He has gone back to the level of one of his other films, Street Kings, which was awful.  The cast is made up of good actors acting like jerky idiots.  The screenplay is a mess of contrived, convoluted nonsense.  And the keyword of the film’s style must have been: “ugly”.  Sabotage – I couldn’t stand it. 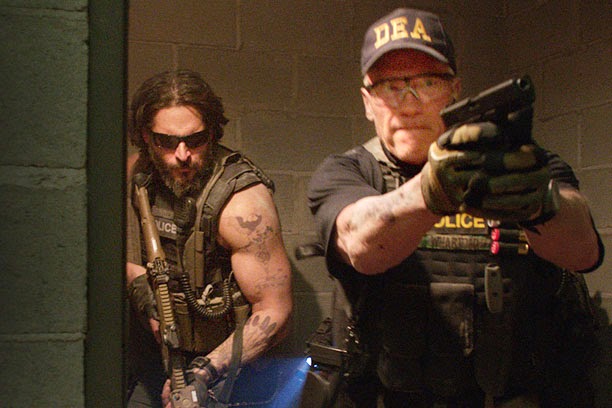