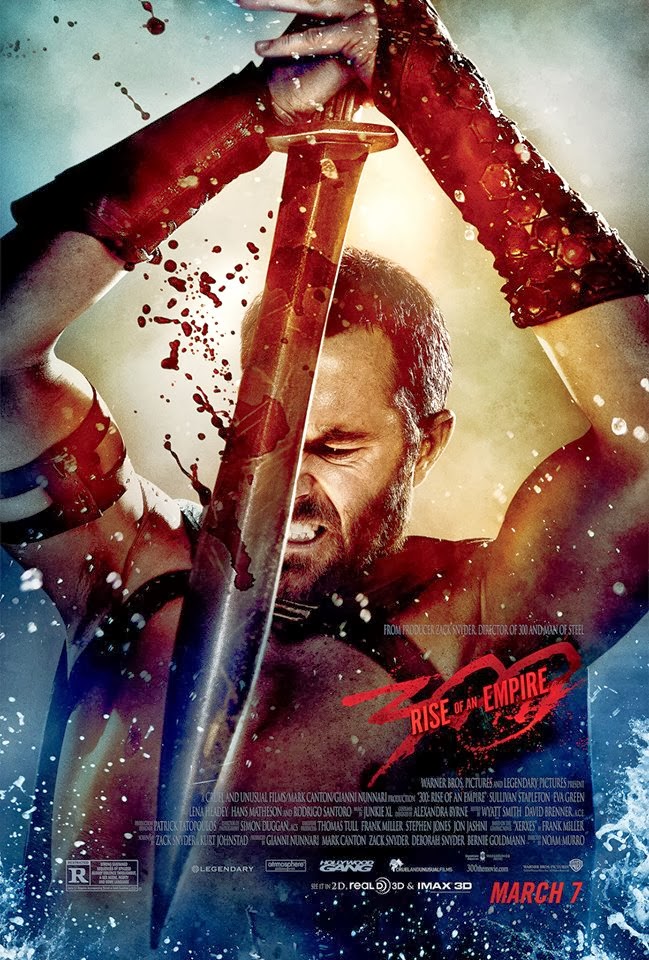 Queen Gorgo:  It begins as a whisper... a promise... the lightest of breezes dances above the death cries of 300 men. That breeze became a wind. A wind that my brothers have sacrificed. A wind of freedom... a wind of justice... a wind of vengeance.

300 is not a film many would have watched in its original release and thought it could use a sequel.  Back in March of 2007, director Zack Snyder impressed audiences with his stylized cinematic vision of Frank Miller’s graphic novel, which was a fictionalized retelling of the Battle of Thermopylae.  300 was fairly straightforward, but its visual aesthetic paved the way for other films and television series like it.  Having been a large fan of 300, the idea of a sequel, especially one that took its time in getting to theaters, was not exactly a film piquing my interest.  Despite the elements of history that could be creatively portrayed within this same graphic novel universe, I was not sure what a studio was willing to do with a follow up inspired by profits form the first.  To my surprise, 300: Rise of an Empire manages to deliver the familiar spectacle, while adding a more complicated story and an excitingly ferocious villain as well.

I had heard all sorts of stories surrounding what the concept for this film was supposed to be in the lead up to its release.  The results are actually quite clever, in terms of how this film functions as a sequel.  It finds a way to be a prequel, a parallel story to the original film, and a follow up to those events, all rolled into one.  We are reintroduced to Xerxes (Rodrigo Santoro), who is given a backstory that explains how he became the so-called ‘god-king’.  The focus then mainly falls on two other characters.  One is Themistocles (Sullivan Stapleton), who guided the naval efforts for Greece, which was in progress at the same time as King Leonidas and his Spartans made their attempt to fight off the Persian forces.  Opposing Themistocles is Artemisia (Eva Green), the only female naval commander, with enough skill and wit to match her crazed intensity.  The bulk of this story focuses on how these two tacticians attempted to outmatch each other, with very bloody results.

While 300 was a story being narrated as a way to rally the troops together, ‘Rise of an Empire’ is more or less an oral history lesson, which still allows for a way to accept the over-the-top stylization of the action elements, among other aspects.  It is basically a fun way for the film to cheat its way out of having to follow real-world logic, in favor of being a highly sensationalized cinematic event, regardless of how familiar these sorts of visuals may seem now.  With that said, director Noam Murro easily fills the shoes of Zack Snyder, who co-wrote the screenplay, but only serves as a producer this time around.  The style found in 300 is very evident here, with the use of slow motion and speed ramps constantly being employed during the action, but the inclusion of naval warfare certainly adds a whole new dynamic to how this film works as a cool-looking action flick. 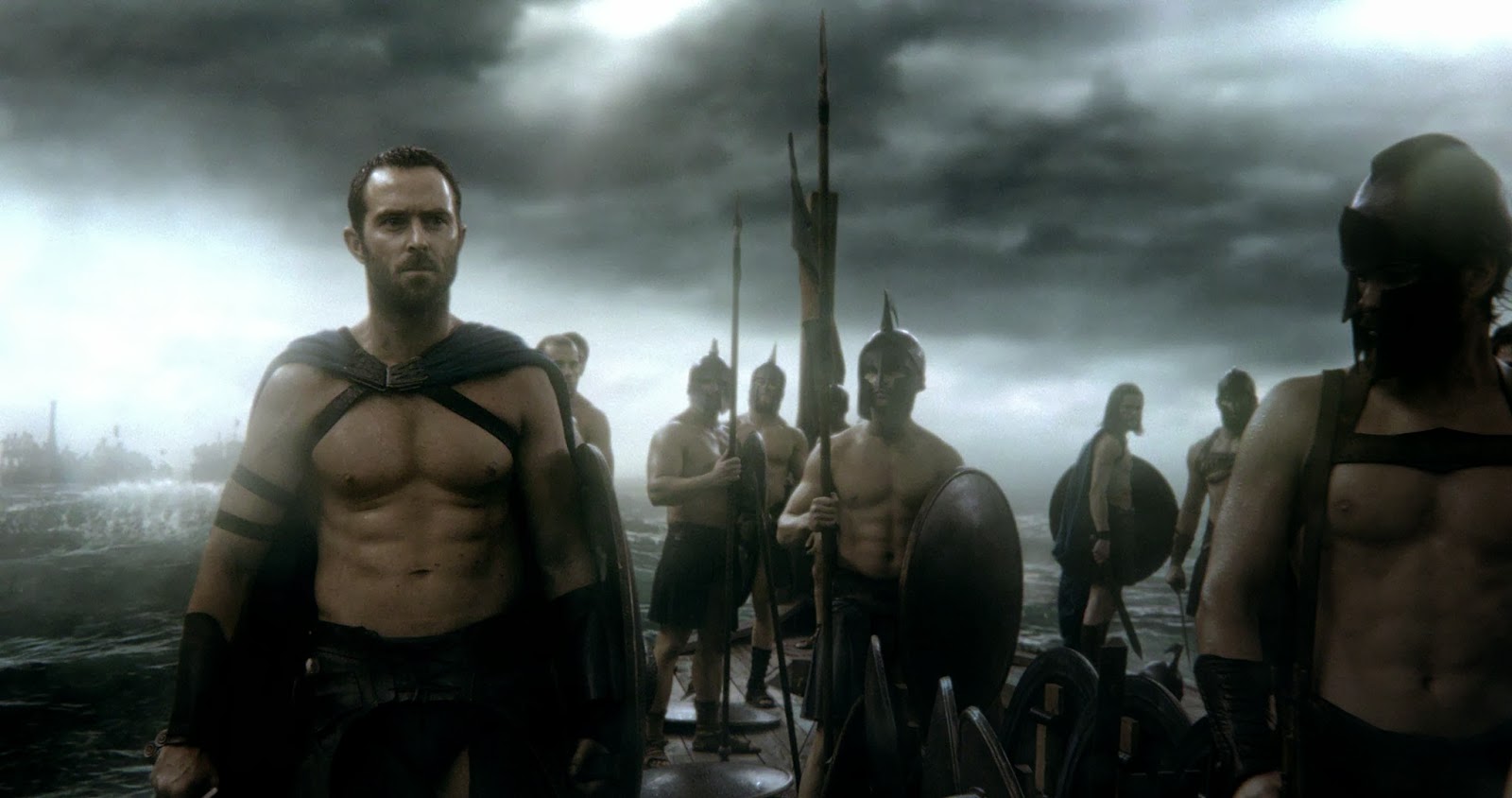 In the first film, the Spartans mainly dealt with the Persian armies in one key location.  The men fighting the battles this time around are given ships to fight aboard, which leads to a larger variety of action to be seen, given the evolving battlegrounds.  Sure, blood is still spilled due to sword fights, arrows, and spears being thrown, but the setting allows the film to expand beyond what the first film had to offer, instead of looking like a knock off.  If anything, while 300 had some iconic aspects to it, given that it came first and the fact that Spartan soldiers were basically portrayed as being proud no matter what, so they would naturally lend themselves to having memorable lines; ‘Rise of an Empire’ does actually feel like a grander film experience, given the higher amount of complexity in the story and the notion of uniting Greece in an effort to fight back.

In guiding the Greeks, Sullivan Stapleton does not quite have the natural charisma that Gerard Butler was able to bring to the role of Leonidas, yet Themistocles is an inherently more interesting character, given how he must consider more than just fighting till death, while keeping respect and honor intact.  He and his men are not Spartans and while this film is still glorifying one side over the other, it recognizes that they are not invincible and are comprised of simple men, not soldiers or sailors, who have been recruited for battle. 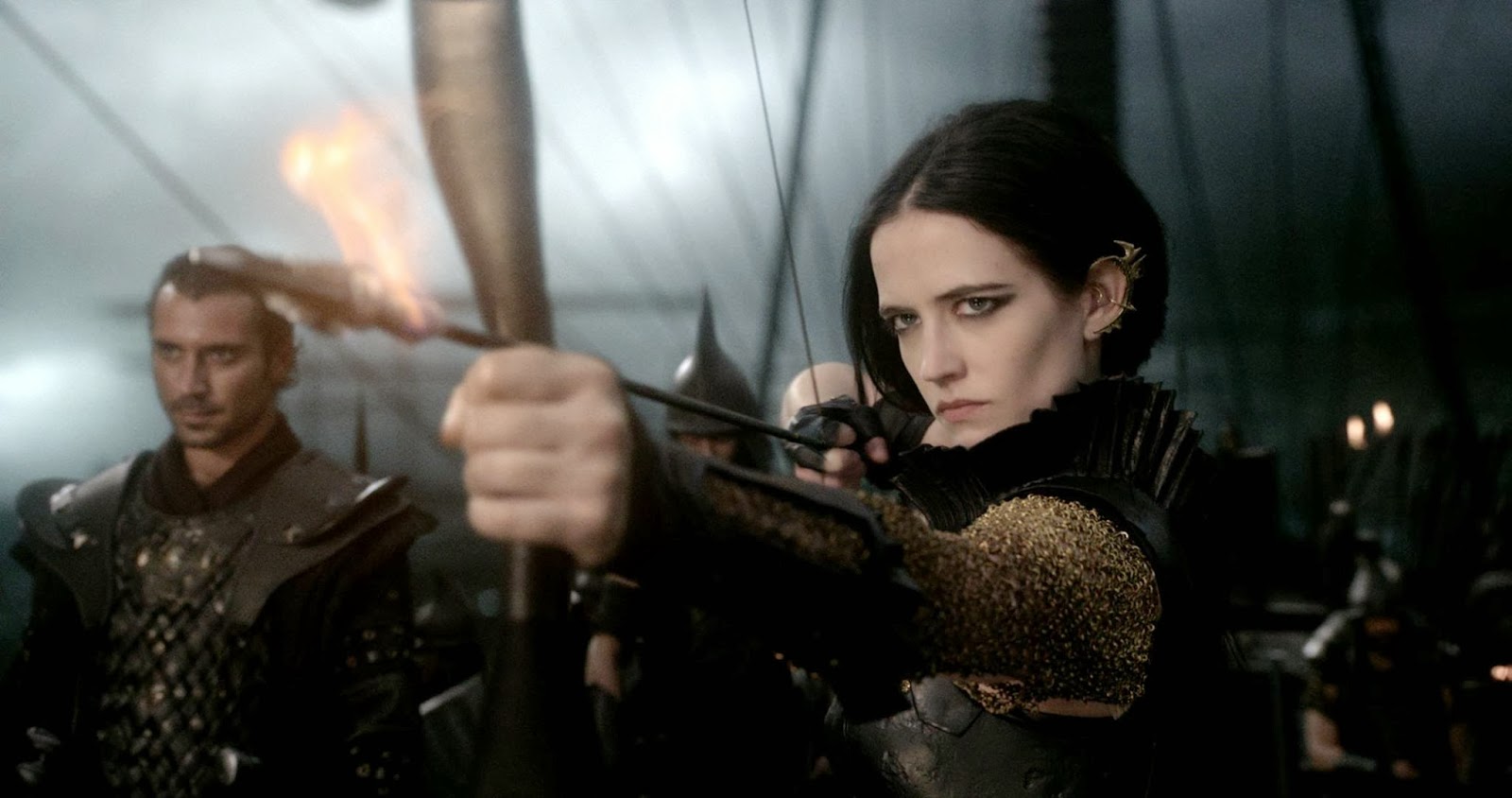 As far as the acting goes, however, this film truly belongs to Eva Green.  As Artemisia, Green allows no one to look more intimidating, whenever she is on the screen.  While just as skilled as Themistocles, Artemisia has the kind of conviction that an actress really has to sink her teeth into, in order to properly bring out the crazy glee that it allows for and Green is very much up to that task.  It is a performance that is practically worth the price of admission, but the film still has so much to offer visually.

I really should emphasize how much of a feast for the eyes this film really is.  Getting away from what I appreciated about the narrative and some of these characters, 300: Rise of an Empire gets a lot of mileage out of the world it exists in.  The sets and costumes are gorgeous.  The blending of CG and practical effects makes for some impressive battle sequences.  A number of long takes allow the film to really cash in on the gorgeously graphic bloodshed fit for a film rooted in visualizations taken from a comic book.  The use of 3D actually adds to the experience, given how immersive the film becomes, while the viewer is basically on the verge of choking, given the constant embers and ash seen floating all around.  All of this is aided further by the thumping score by Junkie XL. 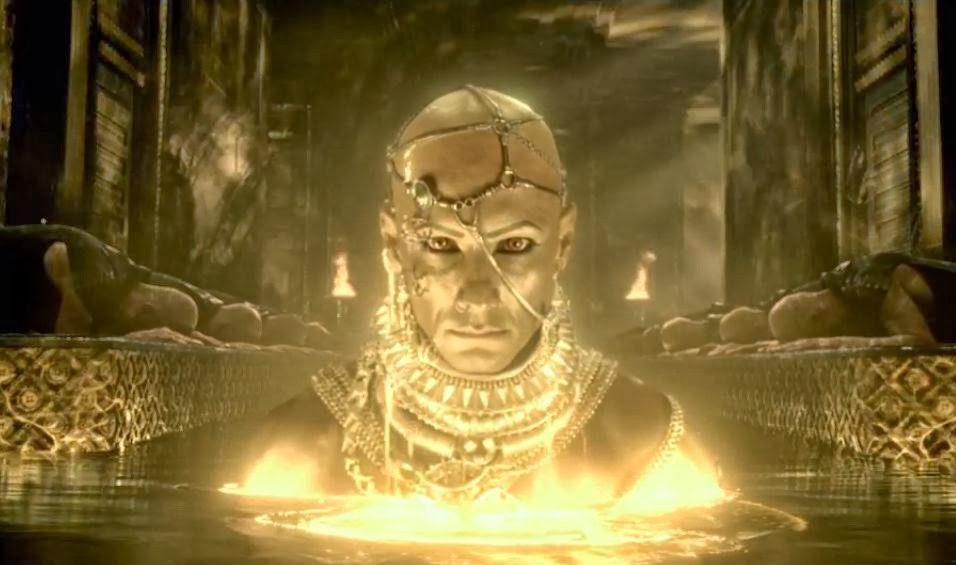 300: Rise of an Empire makes good on what it promises and adds even more for those who think they may have seen everything the 300 world could offer, and I am not just talking about the hilariously aggressive sex scene, featuring Eva Green’s intensely eccentric character.  The film may screw around with the true historic events that took place, in favor of providing R-rated comic book entertainment, but attempts are still made to create a narrative with more going on than its predecessor.  The action overcomes the weight of delivering more of what people have already scene in between this film and the original, with its naval combat additions; the Production design is excellent; and the splashy visual aesthetic continues to please.  An attempt at finding glory in this idea for a sequel was made and I was happy to view it.

Themistocles:  Better we show them, we chose to die on our feet, rather than live on our knees! 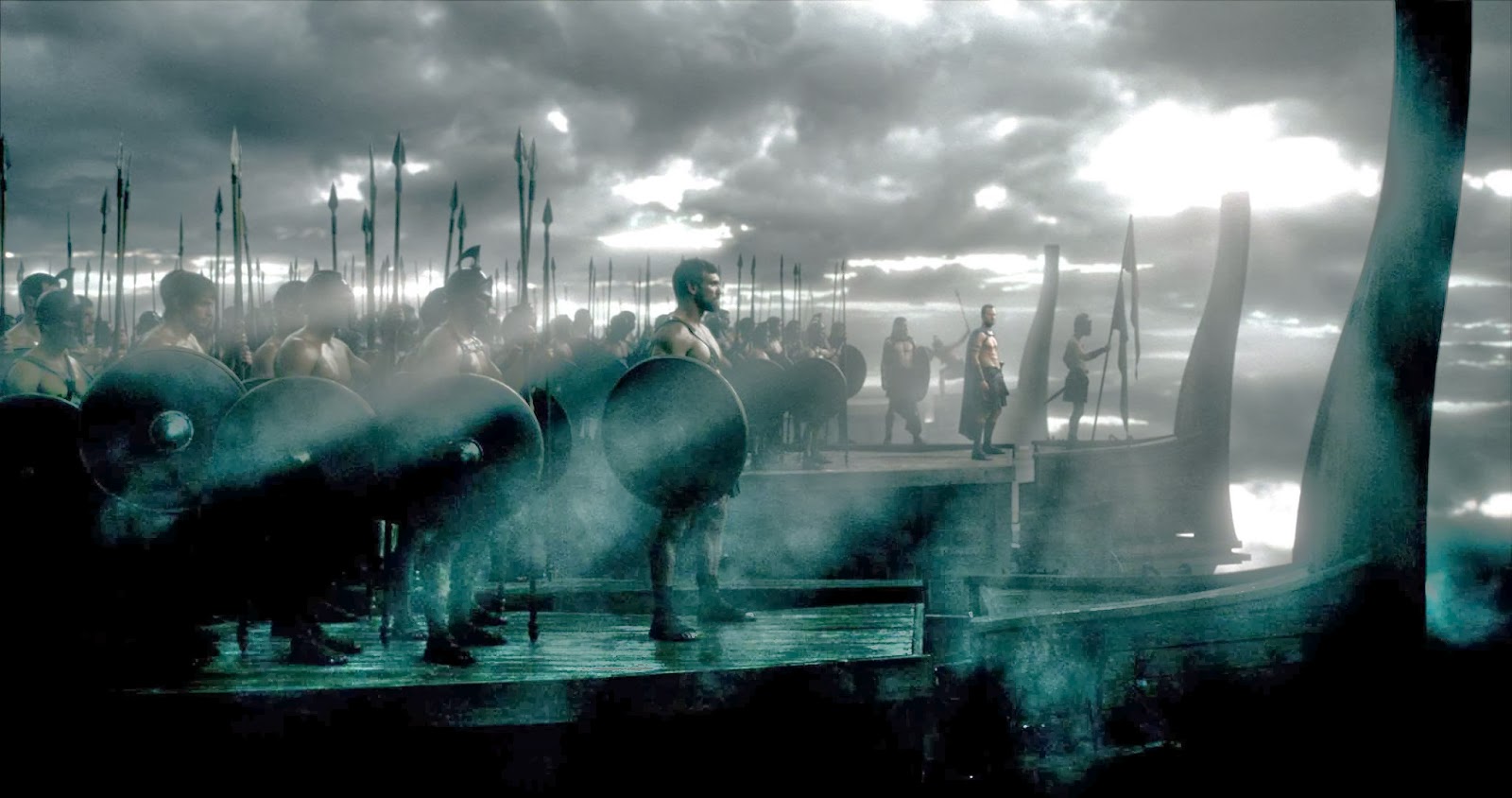