What About ‘Non-Stop’ Though? (Movie Review) 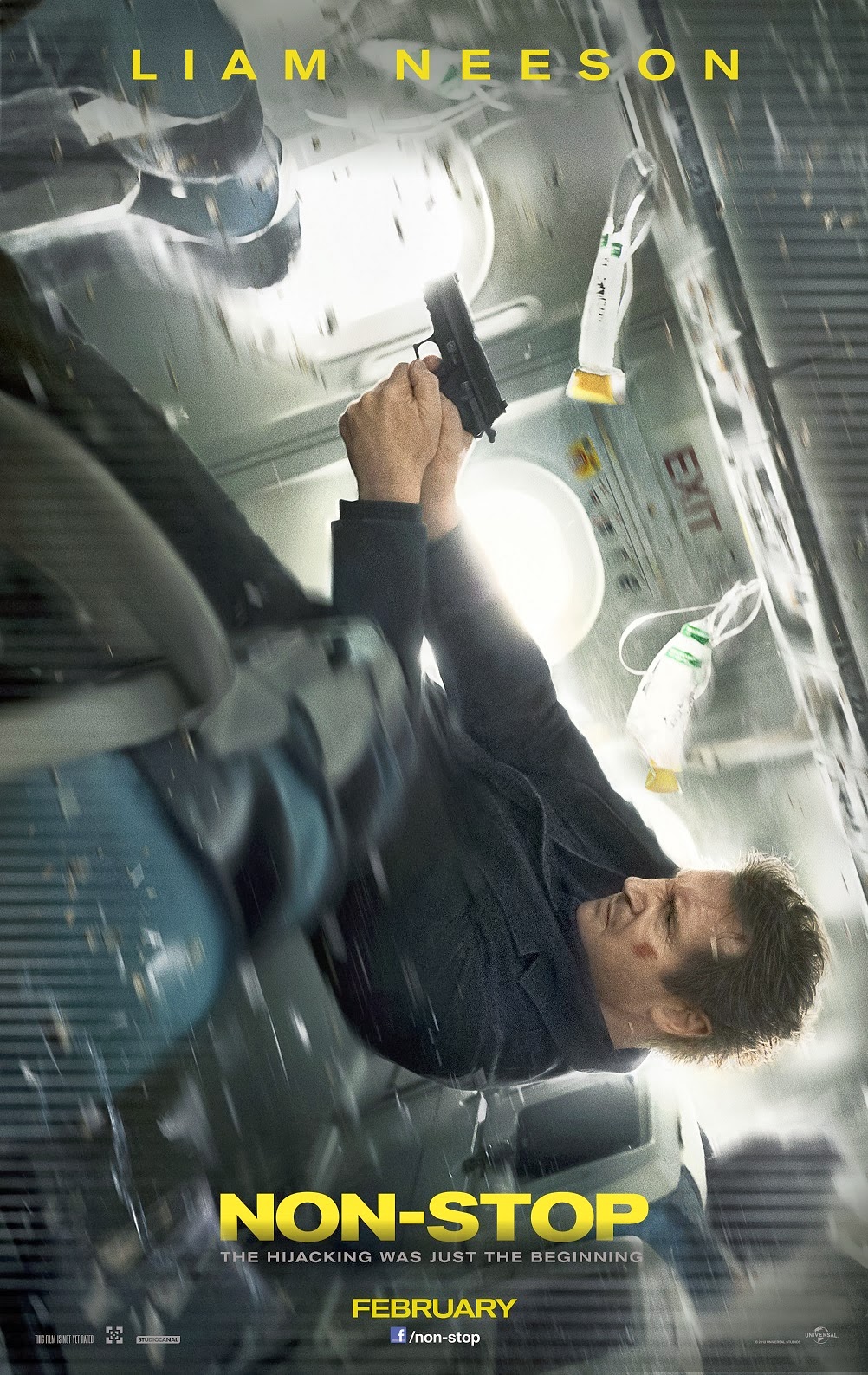 It is fun to see how much credibility an actor with gravitas can bring to a really silly film.  Liam Neeson has returned to the action/thriller realm once again to star in an airplane-hijacking film, with twists and turns that go way too far in terms of being plausible.  It matters little though, as the film has way too much fun with embracing its ludicrous nature, which manages not to be too much of a fault, as Non-Stop finds a way to keep you guessing, while Neeson once again adds his serious presence to a film that may have once seemed beneath him.  It is not a film that is trying to say anything; it just wants to entertain, with the semblance of some clever ideas, in the midst of its high-octane silliness. 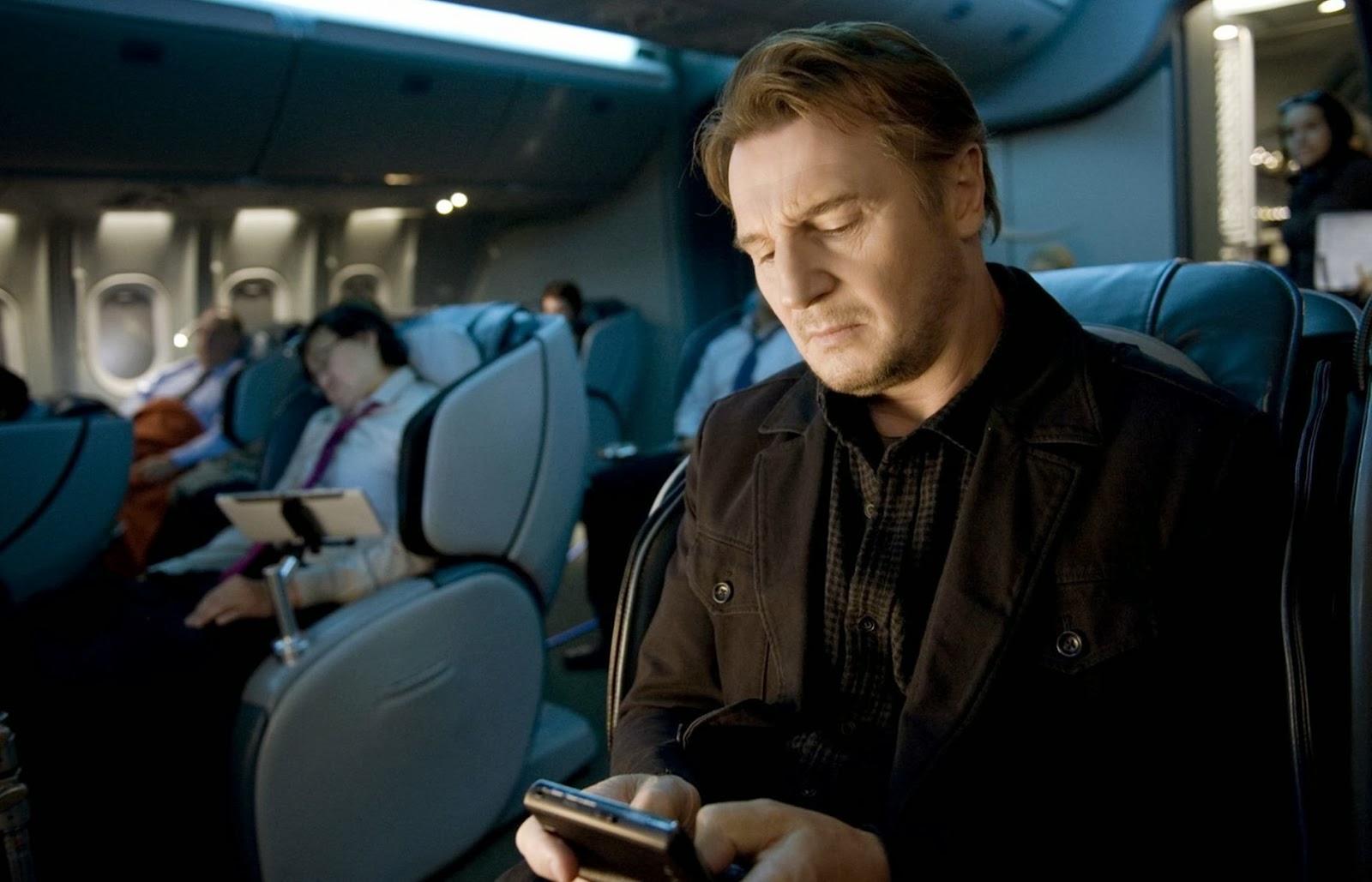 Neeson stars as U.S federal air marshal Bill Marks.  Bill is seated on a flight traveling from New York to London, only to begin receiving threatening text messages telling him that someone onboard the plane will die every twenty minutes, until $150 million is transferred to a certain bank account.  An early twist is the reveal that the bank account is in Mark’s name, which leads to the belief of others that he is actually the hijacker.  Now Bill must find out why this is all happening to him and figure out a way to stop whoever is behind it.

This is the second collaboration between Liam Neeson and director Jaume Collet-Serra.  These two previously worked on the 2011 film Unknown.  While the Taken films may rely on B-movie action theatrics, Unknown and Non-Stop seem to be relying Hitchcockian story setups, while maintaining a level of campiness, which is masked over by the presence of Neeson.  It may be a lot to consider, but it really isn’t, as the thing to keep telling yourself is that Non-Stop is indeed silly, but it is also a lot of fun. 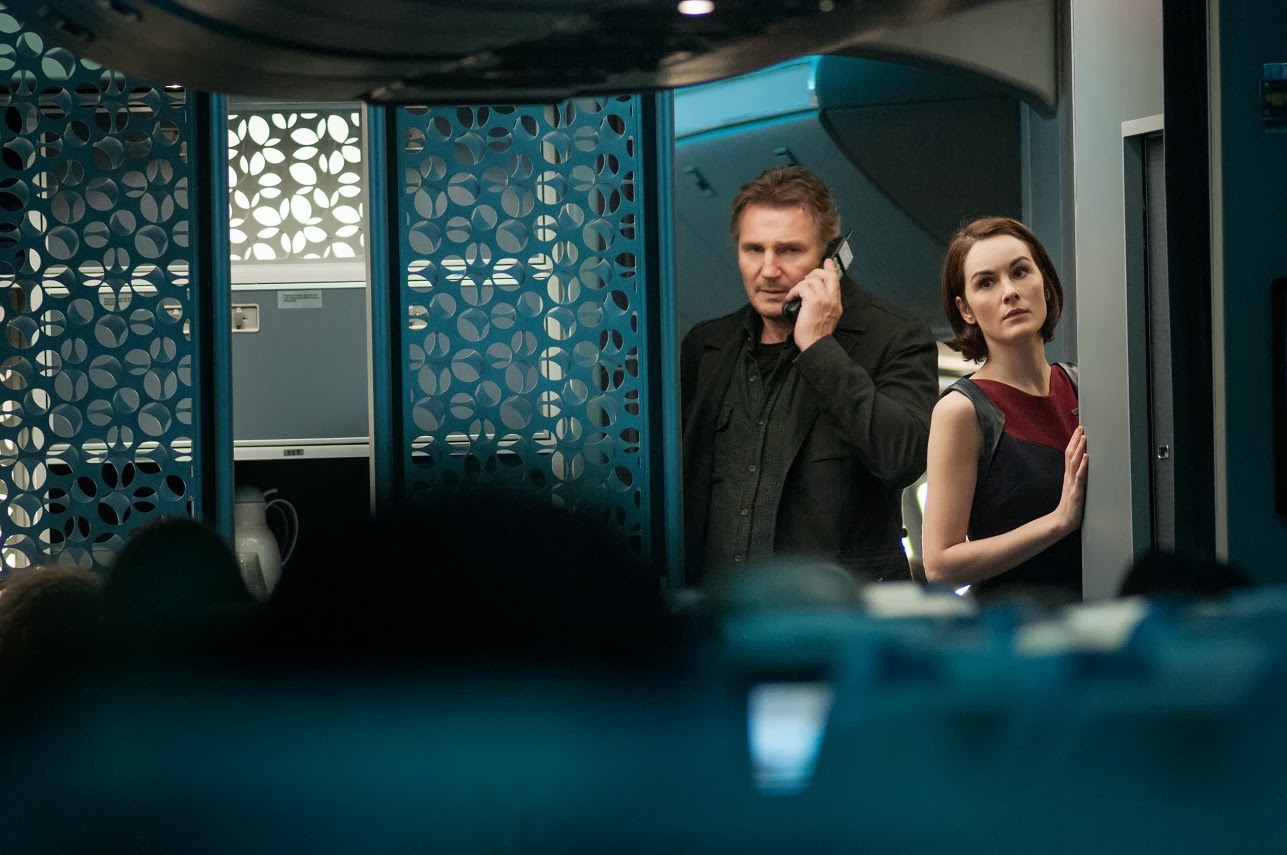 There may not be much of this film that actually makes sense in terms of real world logic, but the film has found a way to be serious enough about the stakes of the story and the Neeson character at the center of the film, in an effort to make it all click together in the right kind of way.  The sense of mystery is quite apparent throughout, even as the film makes it impossible to believe a majority of the events taking place could happen in reality.  There is a fair share of action that is impressively captured, given the close quarters.  There are funny moments that are sometimes intentional and sometimes unintentional, but the film never tries to pretend it is anything that it isn’t.

While making a film about an airplane hijacking is nothing new, Collet-Serra and screenwriters John W. Richardson, Chris Roach, and Ryan Engle are more or less in on what can make this kind of movie fun and they do a lot to keep the main setting and plotting of the film interesting.  Some elaborate camera work is utilized to send us zooming down, around, and inside, and out of the plane.  Supporting characters are all crafted in the ridiculous sort of way that could allow anyone to be a suspect, simply because they all decide to turn and look a certain direction, with a label that could say “guilty?” practically stamped on all of their foreheads.

Bill Marks:  We’re running out of time, do you hear me?

Still, the film relies on Liam Neeson to keep this movie interesting and it works.  Neeson has been game to take on these B-level action films since 2009’s Taken and audiences have loved it, regardless of how good the film turns out to be  His reliable nature as a true actor that can kick ass, while looking professional, has been a great way to get audiences excited and Non-stop is practically parodying this concept by giving him hilarious lines of dialogue fit for tough guys, scenes that highlight his stature and ability to fend off multiple opponents, and just enough backstory to make you realize what Neeson gets to tap into as an actor to make it seem respectable enough for him.  I do not know whether or not Neeson is having fun doing these kinds of movies (I would assume he is), but he must at least be in on the joke at this point, despite still working hard enough to keep the audience on his side. 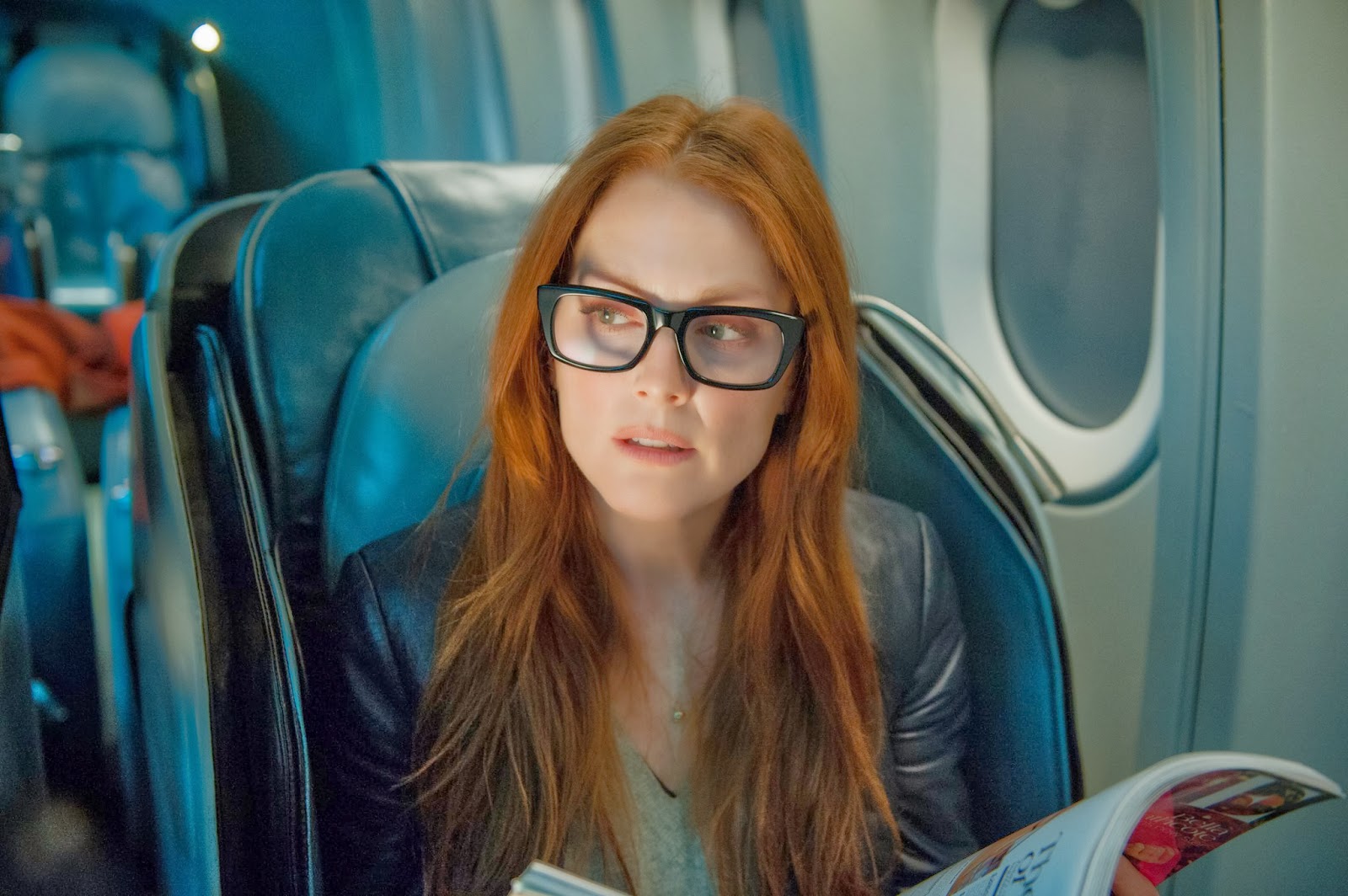 Putting that aside, Non-stop has a wealth of supporting actors, which includes Julianne Moore, newest Oscar nominee Lupita Nyong’o, Corey Stoll, Scoot McNairy, Linus Roache, Anson Mount, Nate Parker, and Shea Whigam.  Some of these names may not mean much to you, but as a guy who is good at remembering character actors, Non-Stop seems to have gathered all it could from the talent pool in an effort to add some class to this ridiculous film.  Are any of these actors really turning in quality performances?  Not necessarily, but no one appears to be slumming it either.  Everyone establishes a base persona and film exploits it to no end, in an effort to get you onboard with who they are, while making you question which one is the guilty party.

All of this and the film still has room for an absolutely absurd, yet high-energy third act, which throws any semblance of logic out the window and becomes a go-for-broke action film.  It does not hurt that Neeson does plenty to make you care for a man who has seemingly done everything he can to look guilty in the eyes of the rest of the passengers, so seeing the comeuppance be dealt to whoever is actually guilty feels plenty appropriate, but the film does not stop being creatively ridiculous in the way it has its characters fall into action scenarios.  Make no mistake, a film set aboard a hijacked plane, that goes to the lengths that the setup establishes, will certainly involve some wonderfully involved (and very silly) action-based theatrics and make general audiences cheer. 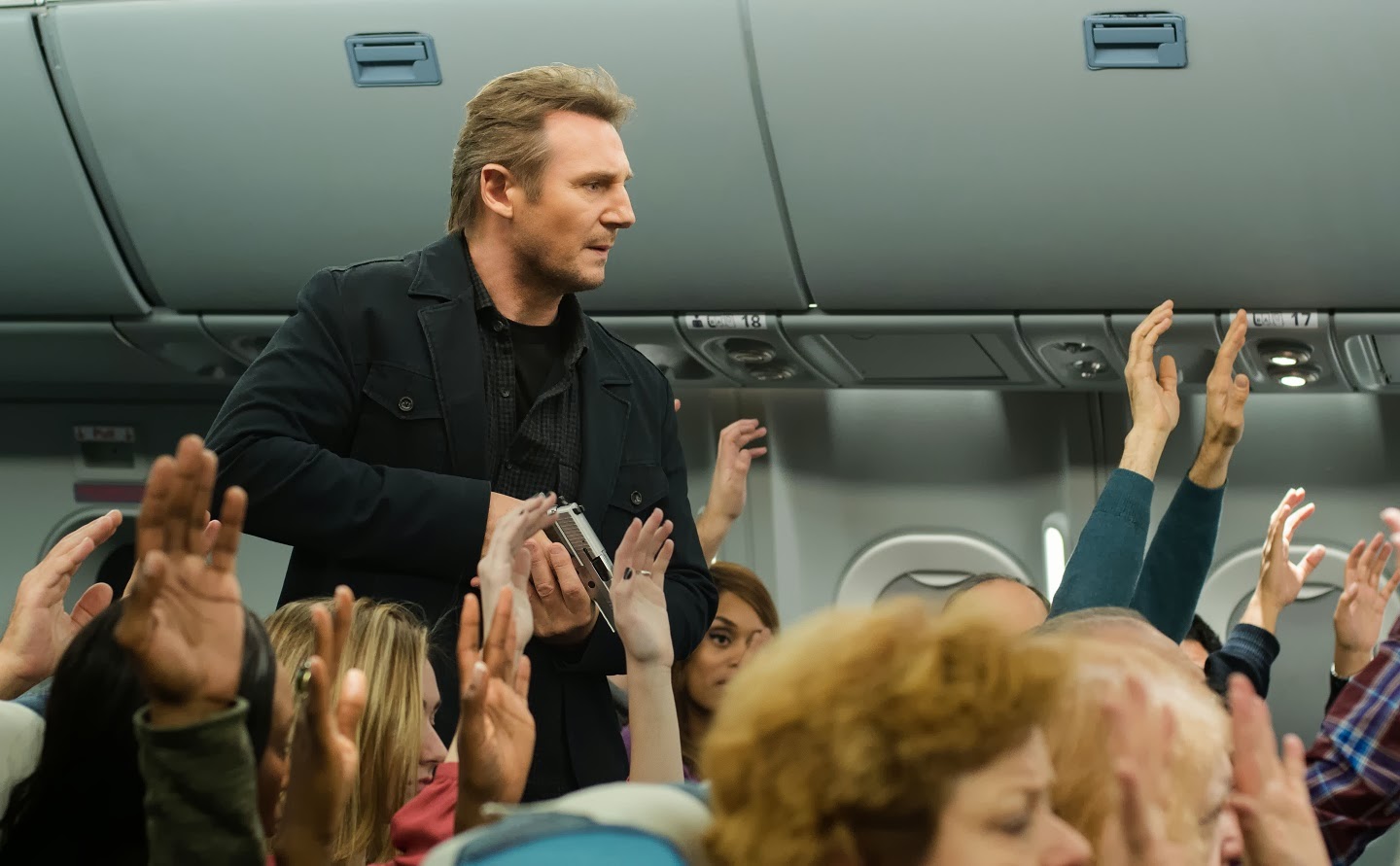 Non-Stop is a lot of fun.  That is where my emphasis needs to be.  It is silly and illogical, but Liam Neeson has devoted a part of his career to making these sorts of silly, illogical films work.  It may not always be as successful, but I had a lot of fun with this film and what he was able to bring to it.  Additionally, as a person who has admired the ambition that Jaume Collet-Serra has brought to his previous B-level thrillers to make slick-looking films (see: Orphan or House of Wax), I found that to go a long way once again for this film.  For what this film is, given the style and Neeson’s gravitas, Non-Stop is practically great art.

Bill Marks:  I’m not hijacking this plane, I’m trying to save it!