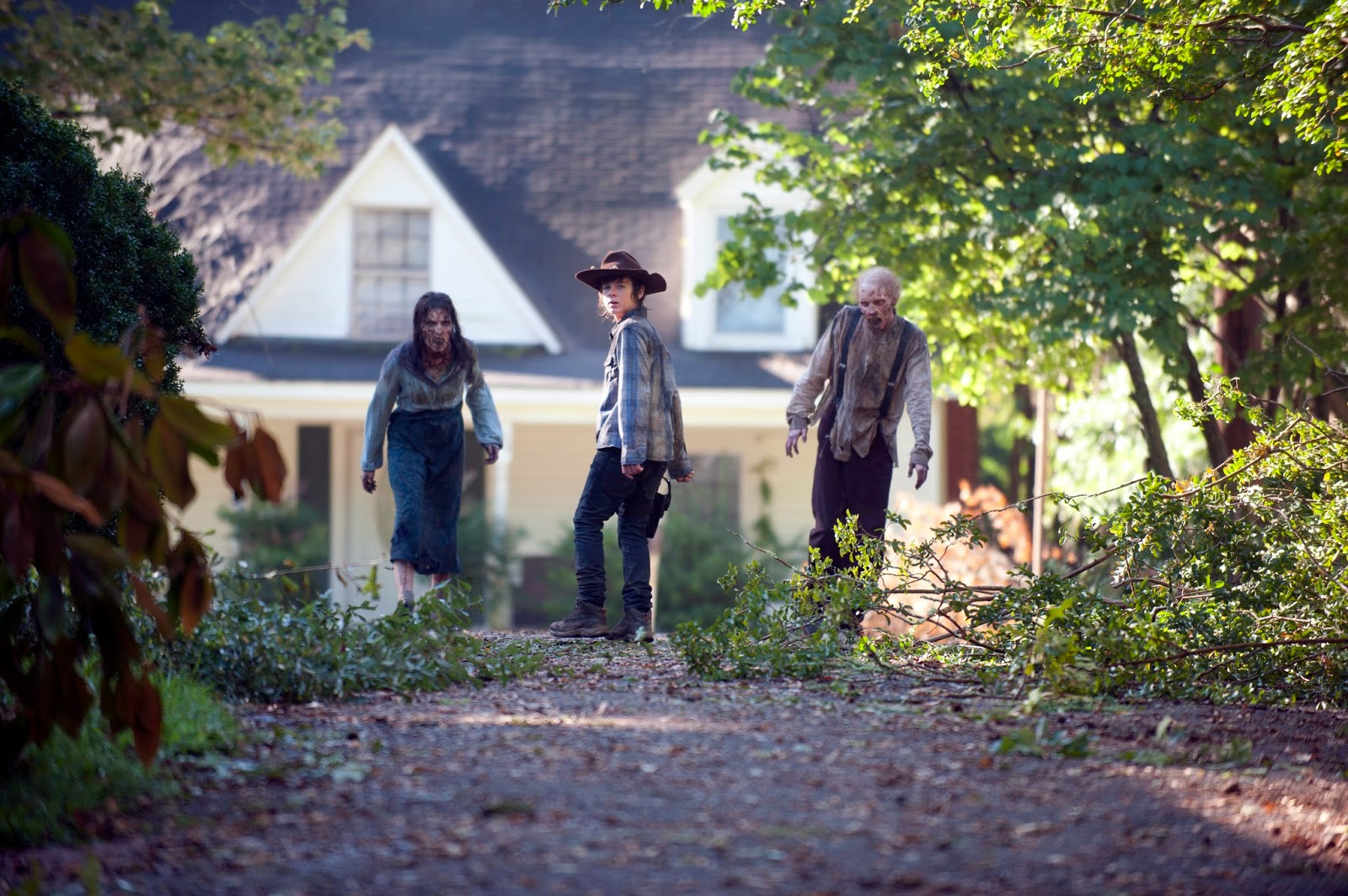 In addition to participating on The Walking Dead TV Podcast, I write weekly episode recaps/reviews for each new episode of The Walking Dead.  Anyone continuing on should expect spoilers.

Returning from hibernation, The Walking Dead is back and its mid-season premiere was a good one.  Tightly focused, free of shenanigans with the very dead Governor, and doing a lot with visual storytelling, as opposed to clunky dialogue, this episode represented a lot of what I like most about this series.  With no time spent dealing with everyone else, after the fall of the prison, “After” has a lot of chance to breath, letting the audience simply follow along with the post-battle struggles of Rick, Carl, and Michonne.


Picking up where we left off, the prison is done for.  Thanks to the Governor’s ridiculous plan, no one gets a prison to live in and now the entire cast is divided.  The episode opens with focus on Michonne, as she takes a few last looks at the prison, before wrangling in some new walker pets and proceeding on her way to blending in with the crowd.  We also get a bit of time to see that the Governor is very much dead and Hershel unfortunately needed a finishing touch.  It is a fine cold open, especially since we come to realize that half of this episode is going to be devoted on providing some much needed development for Michonne. 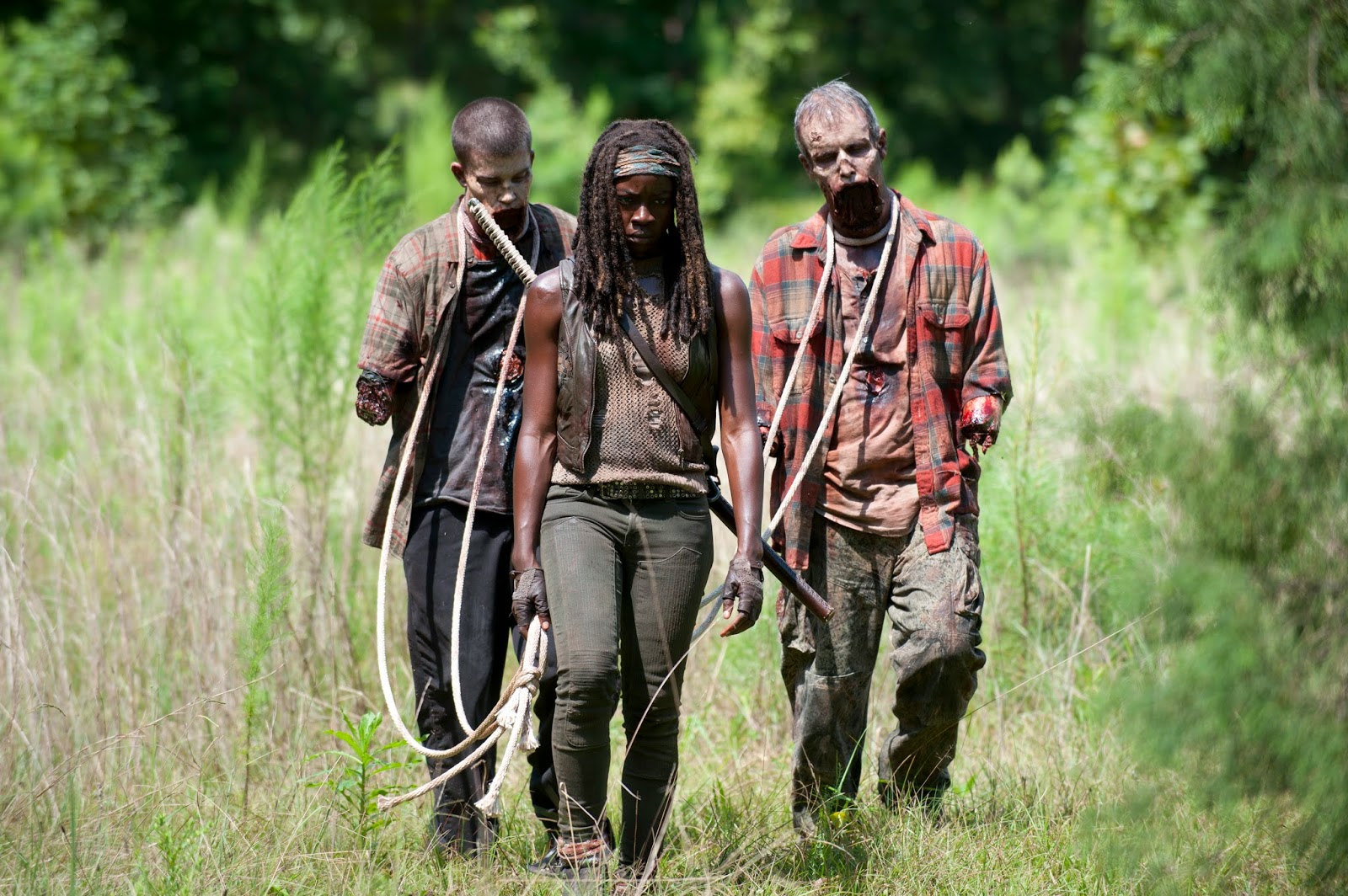 The other half of this episode is focused on Rick and Carl.  Rick is staggering away from the prison, having been shot and beat up from his previous bout with the Governor.  Carl is acting quite irritated, paying little attention to his father and keeping a faster pace on purpose.  Both are a combination of feeling defeated, upset, and dismayed, especially given the assumption that baby Judith was among the victims at the prison.  It does not take long for the two to find themselves shouting at each other.

Rick is obviously exhausted and nearly broken, given his wheezing, which leads to him basically sitting out for a good chunk of the episode, after he and Carl find their way to a house to take shelter in.  The two argue and Carl drops a Shane bomb, which leads to an awkward break between the two.  Once morning arrives, Carl finds his dad unconscious to the point of assuming that death may be just around the corner.  Naturally, Carl is alarmed and begins shouting for his dad to wake up, which leads to walkers knocking on the door.  Carl takes matters into his own hands and eventually finds himself down the road from the house, having lured away the walkers, but barely taking care of them by himself.

There is a lot of material for young Chandler Riggs to work with in “After”, which is nice to see.  Having gone from a meme (“Where’s Carl”) to a borderline sociopathic killing machine; Carl is someone who could use some shading and this episode not only gives Riggs the chance to shine, it is executed quite well, thanks to everyone involved.  Carl gets two big scenes of dialogue where he both gets to tell off his father and accept his fate to die, rather than kill Rick and be alone.  They come from a place of adolescent issues coming to a head and trying to manage what a crazy life a person like Carl has had, given the circumstances.  In both, Riggs really sells what the show is providing him. 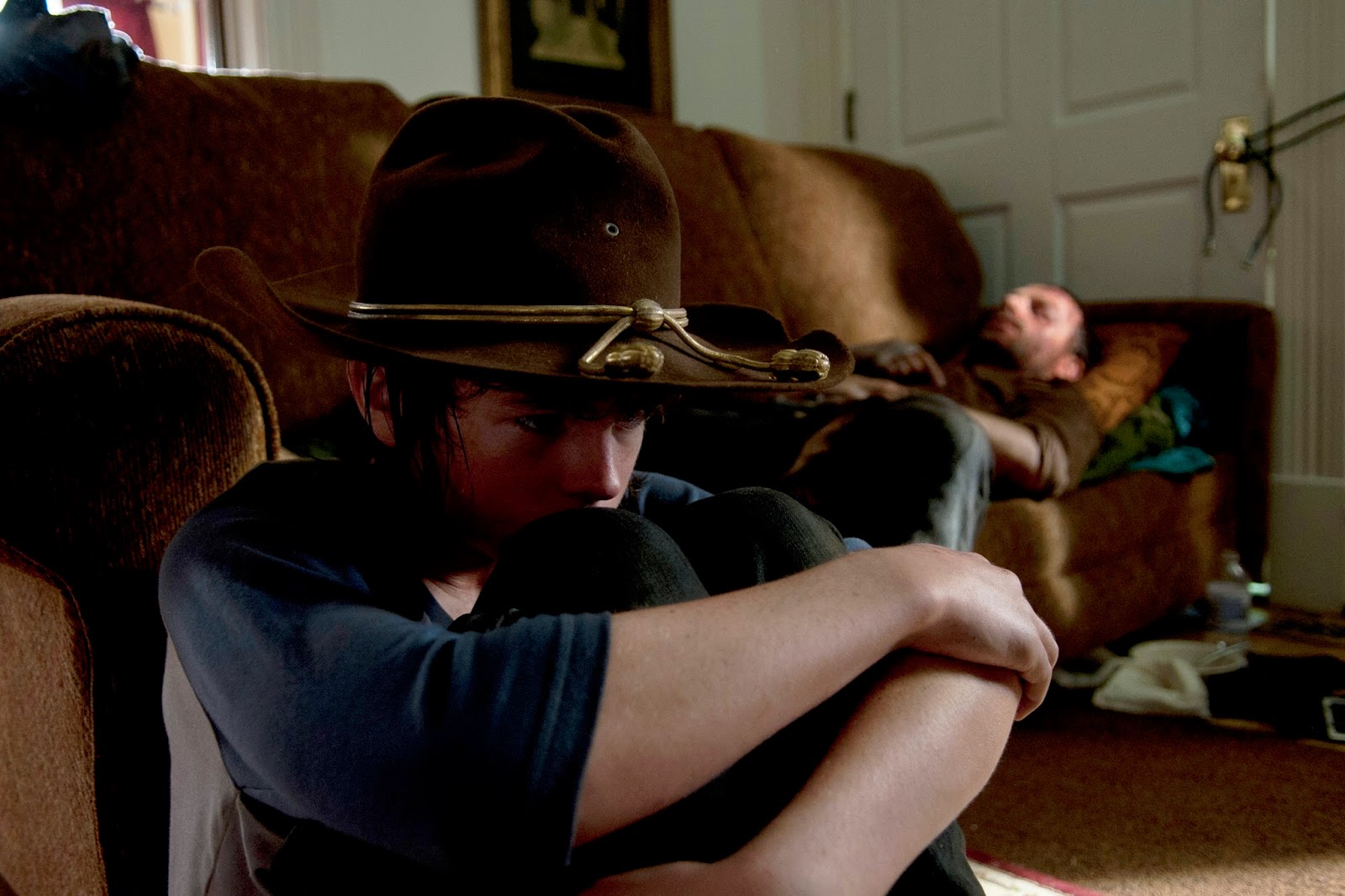 Working just as well is the structure of Carl’s portion of the episode, as he basically gets to a point where he has told off his father and decides to look for supplies on his own, as he believes he does not need help anymore.  Obviously this is where the episode throws it in your face that Carl is still just a kid and should take all the help he can get, but “After” works because of its focus on telling a lot of its story visually.  Sure the zombie chases and fights are as exciting as they always are, but this episode’s screenplay by Robert Kirkman does a service to its characters by simply letting them observe and perform actions that require very little speaking.

Michonne’s side of the story is quite effective because of this as well.  She spends a large portion of the episode dealing with the fact that she has once again lost a place of security and the people that were the closest thing she had to family.  We get to watch her come to terms with her situation, which is largely handled dialogue free.  I enjoyed all of this quite a bit.  It helps that the balance of Michonne being quietly badass and openly emotional is something that has very much improved since her introduction last season,  It also helps that we are given a much bigger glimpse into Michonne’s backstory via a dream sequence, which was pretty expertly handled.

I can admit that it though me off at first, which was obviously the idea.  The scenario seemingly felt like a flashback, only to quickly reveal all the things that were off about the scene.  Still, what we can surmise is that Michonne had a child (which was already a pretty easy guess, given her breakdown in the episode “Infected”), and something transpired between her and her boyfriend/husband/baby daddy/whatever and his friend/brother/whatever.  Okay, so it’s still a bit vague, but it is more than we have ever gotten with Michonne and it was also one of the few times that The Walking Dead offered up something truly unique and separate from itself, which is so generally focused on “the now” and all the grim despair that comes with the current state of affairs. 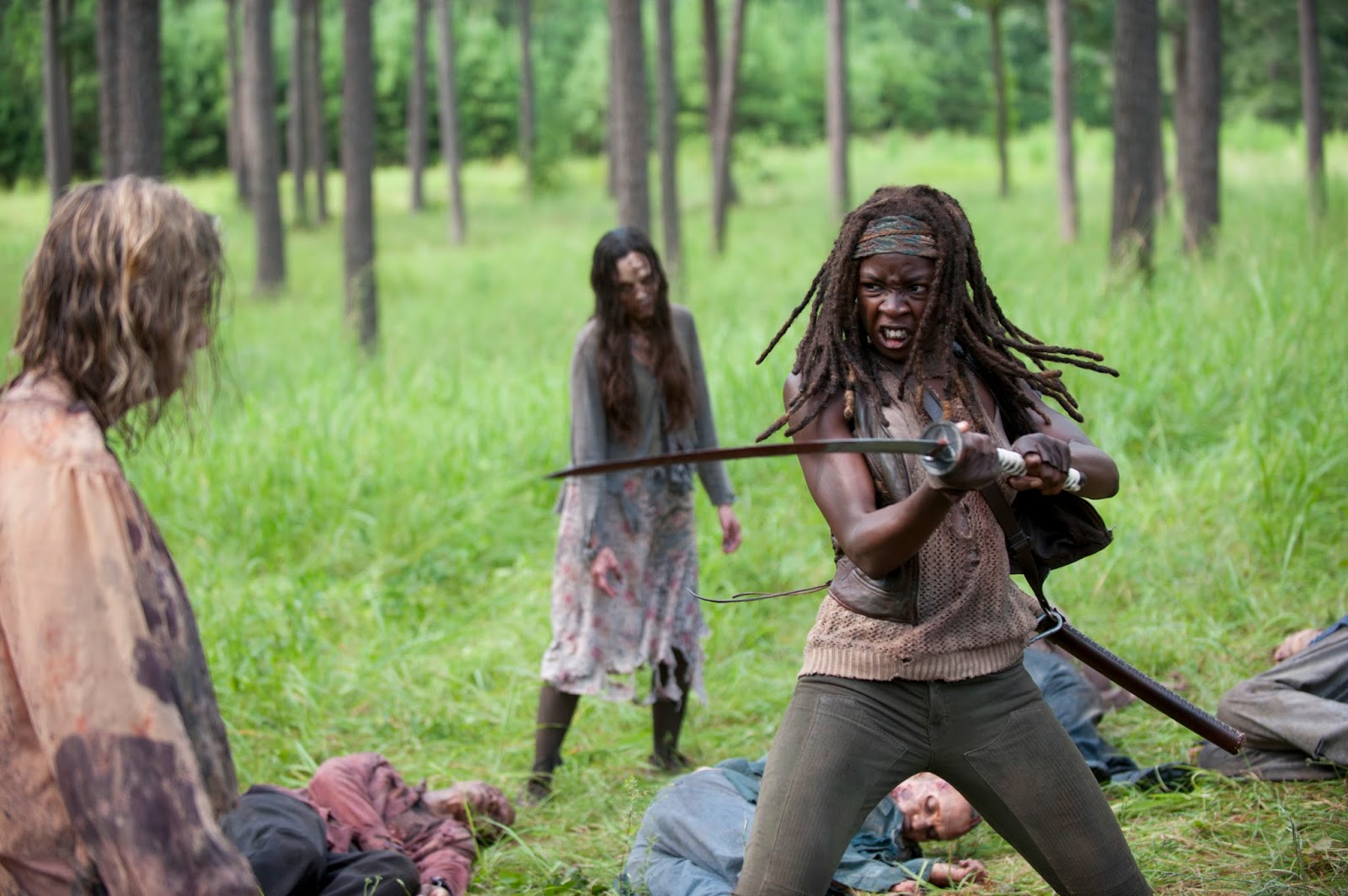 That is the other thing – this episode ends up not being so grim and dark.  “After” may begin with things being pretty much worse than ever for our heroes, but it actually turns into a story of hope.  Michonne eventually snaps out of her situation and decides she wants to be a part of something and will do what it takes to get that back.  Carl basically realizes his father is not infallible and that he should not be too proud or arrogant to go it alone because of that.  Even if Carl’s plot can be boiled down to teen angst, it still leads to a nice scene of him simply enjoying the day, as he eats pudding, with a walker’s arm longing for Carl in the distance.  Any time The Walking Dead wants to take some time to throw in some humor, I am happy to embrace it.

I kept mentioning the dialogue earlier, because it has been a constant source of problems for The Walking Dead.  The writing has never been the show’s best strength and if often leads to circular conversations with characters that are fairly thin to begin with.  While I am not saying limiting the dialogue is always the greatest solution for this series, it certainly helps when the show is doing such a fine job with telling its story through visuals, let alone keeping the focus on a limited number of characters.

From here, I can only hope the show keeps us in the dark on everyone and chooses to, instead, reveal the remaining members of the cast in similar fashion to “After”.  I have obviously made it no secret that the return of the Governor was quite bothersome to me, given the way it was handled, but if there needed to be an overdone way to move these characters out of the prison, so be it.  At least now we have a chance to see each of the main characters possibly be expanded on, given that they all have some breathing room, before we put them all back together again.  If they’re lucky, maybe they will also get a treat as good as a huge can of pudding. 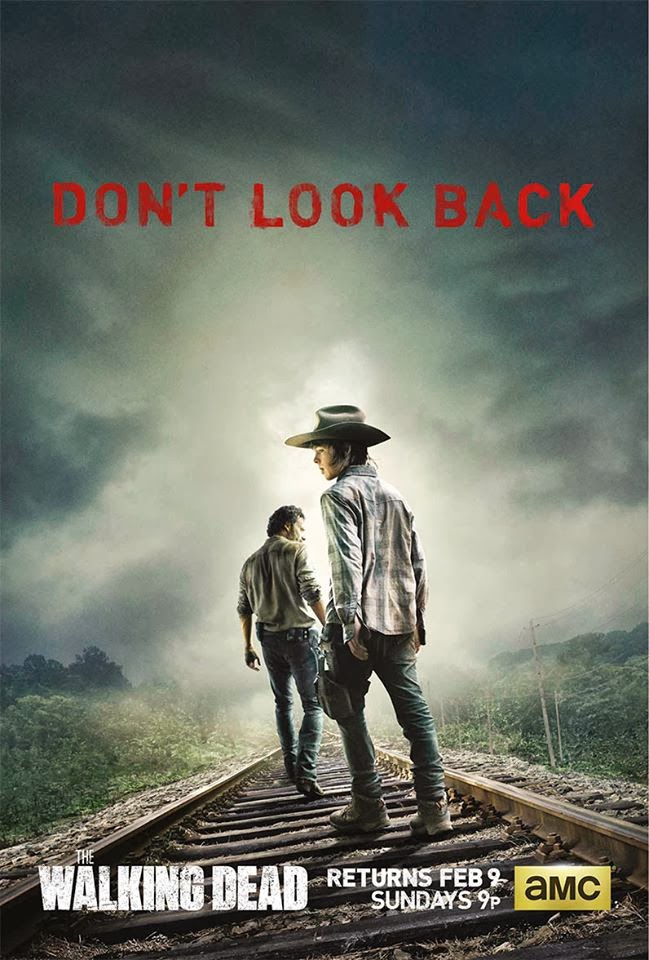