‘The Monuments Men’ aka The Nerdy Dozen (Movie Review) 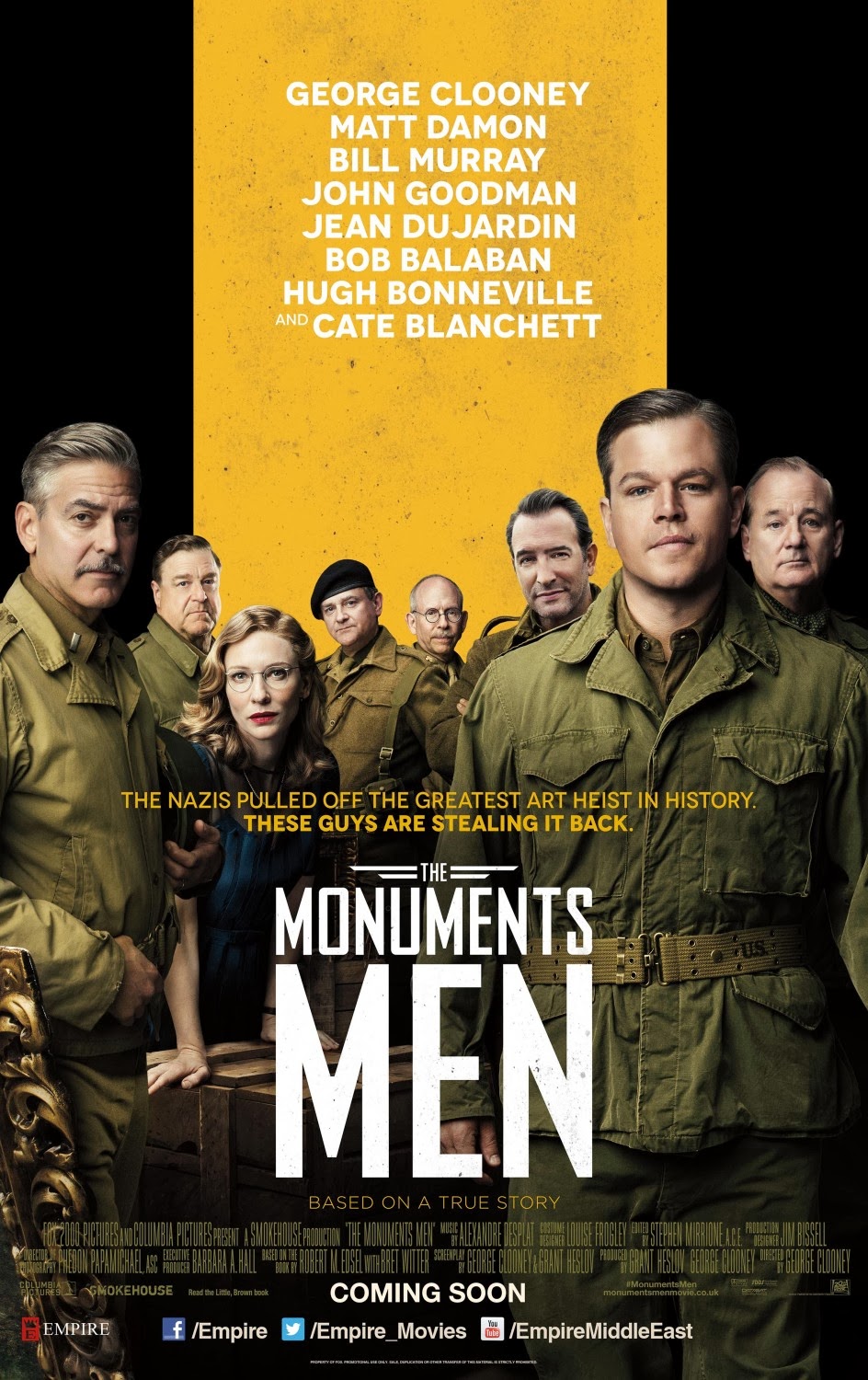 Granger:  You want to go into a warzone and tell our boys what they can and can’t blow up?
Stokes:  That’s the idea.

For all the great things The Monuments Men brought together in an effort to make an exciting war picture, with a good-natured twist, the film certainly felt pretty lifeless and dull.  I tend to make it no secret that I am happy to embrace the marketing of films, in an effort to get me excited for them.  A well cut trailer and a solid list of actors and talent behind the camera is plenty to have me happily anticipating a film.  The Monuments Men had all of that and even after the film switched from its awards-friendly release date in December to February, I was still prepared to give the film the benefit of the doubt that I would at least find it quite enjoyable.  The problem, as it turns out, is that screenwriter/director George Clooney and his co-screenwriter/producer Grant Heslov could not find a way to make this particular WWII story into something with more dramatic weight.  There is a good cause being fought for, which is different than the norm in a war movie, but even with A-list talent, the results felt rather inert. 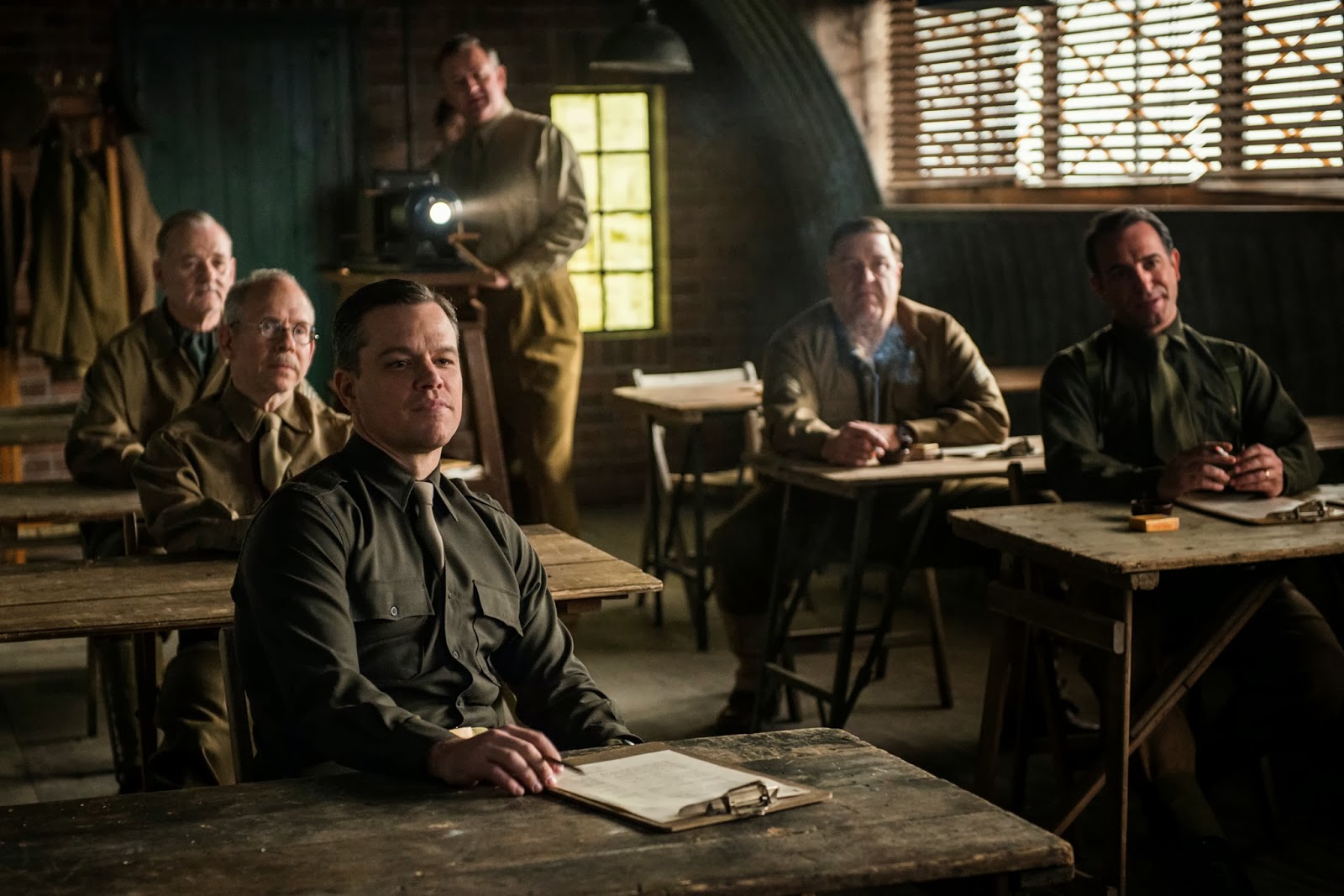 George Clooney not only directs but stars as Frank Stokes, the man in charge of a group known as “The Monuments Men”.  This group consists of various museum directors, curators, and art historians, who have all come together in an Allied platoon in an effort to enter various parts of Europe and rescue artworks that have been taken by the Nazis, essentially saving them from destruction, and ideally returning them to their rightful owners.  This platoon includes James Granger (Matt Damon), Richard Campbell (Bill Murray), Walter Garfield (John Goodman), Jean Claude Clermont (Jean Dujardin), Donald Jeffries (Hugh Bonneville), and Preston Savitz (Bob Balaban).  Help comes from Claire Simone (Cate Blanchett), a French art historian and member of the French Resistance, who has a large amount of knowledge regarding what the Nazis did with the stolen art.  Ideally, The Monuments Men will be able to move in and out of different territories, receiving cooperation from the other troops, and saving pieces of beloved art as they go along, but war is never easy.

Making this film could not have been easy either.  Some may argue that it is the tone that is off balance, as that was the cause of the delay in this film – finding that right balance.  I cannot say that is the issue.  The film is very consistent in what it tries to do throughout, but there just seems to be an inherent problem in said presentation.  The Monuments Men wants to take a serious subject, which is the preservation of culture, an admirable objective, but inject that premise with a fairly light tone that becomes affecting as it goes along.  The fact that there is a depiction of the genuine danger that these men come across keeps the film from feeling completely uneventful, but having moments that effectively convey sentiment can only go so far in a film that feels fairly weightless. 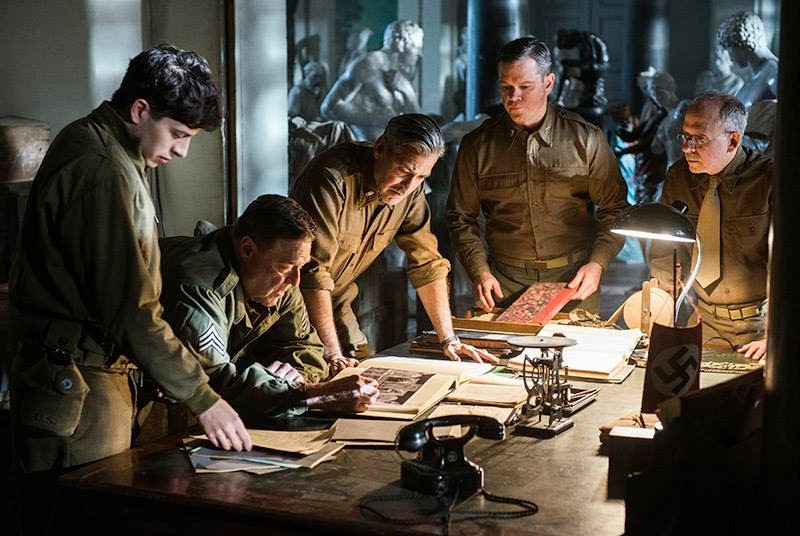 I have no issue with how loose this film plays with the concept of it being based on a true story.  Kelly’s Heroes is a WWII comedy-adventure (a great Clint Eastwood film) that is based very loosely on true events, but had plenty of energy to go along with it.  The Monuments Men feels like it wants to play everything very safe, while remaining honorable to the spirit of this true story, but ends up having little to say and even less of an arc for this story or these characters to go through.  We see how bad things are happening to not only the art, but the people (the Holocaust is brought up just enough to reassure you that the soldiers in the Nazi army suck), but the film brings up all of these various events in an episodic way, giving us little to invest in, beyond the mantra of “gotta find that art”.

All of the actors seem comfortable, but no one is really stretching themselves, with the exception of Downton Abbie’s Hugh Bonneville, who is featured in the sequence that provides the film with the most urgency in its second half.  Matt Damon is nearly an afterthought, given that he spends the most time away from the rest of the main cast, in an effort to buddy up with Blanchett’s character, hoping to find more art.  The rest of the cast is basically put into pairs.  Goodman and Dujardin have a couple minutes to share their inexperience in war, while Murray and Balaban (the best pairing) get the chance to irritate each other, while also showing their evolving respect for one another.  Clooney is fine as well, though the fact that he has 5 or 6 separate moments of voiceover monologue about the importance of this mission seems to really show that this film had few other ways to really convey the importance of the mission at hand and the men risking their lives for it, beyond openly saying it to the audience. 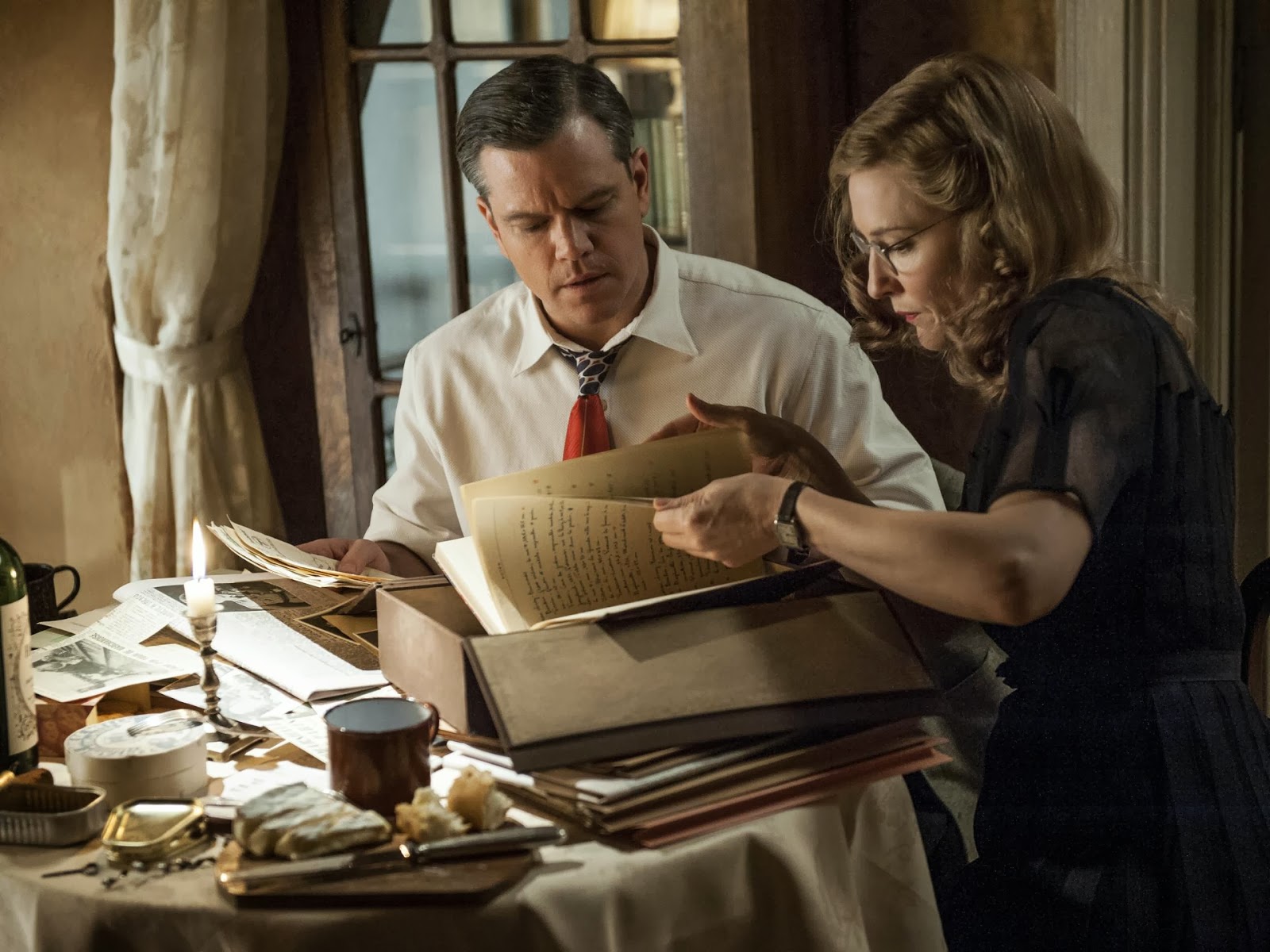 The heart is in the right place, the film has the feel of a light-hearted caper, with an enticing backdrop, but the nature of this story never proves to become all that interesting on a dramatic level.  The humor borders on being too dry and too short-lived, with the attempts in between to be meaningful coming off to not so great effect.  It is not that I found the film to be boring, necessarily, but the word “dull” certainly seems like an easy one to associate with The Monuments Men, which was not monumental at all, compared to the real life platoon and what they accomplished.  There is a nice level of old school value to be found in this film, as Clooney directs with a “no frills” approach, but he can’t escape the fact that there is not much punch to go along with this art rescue tale.

Stokes:  Remember the high price that’ll be paid if the very foundation of modern society is destroyed. 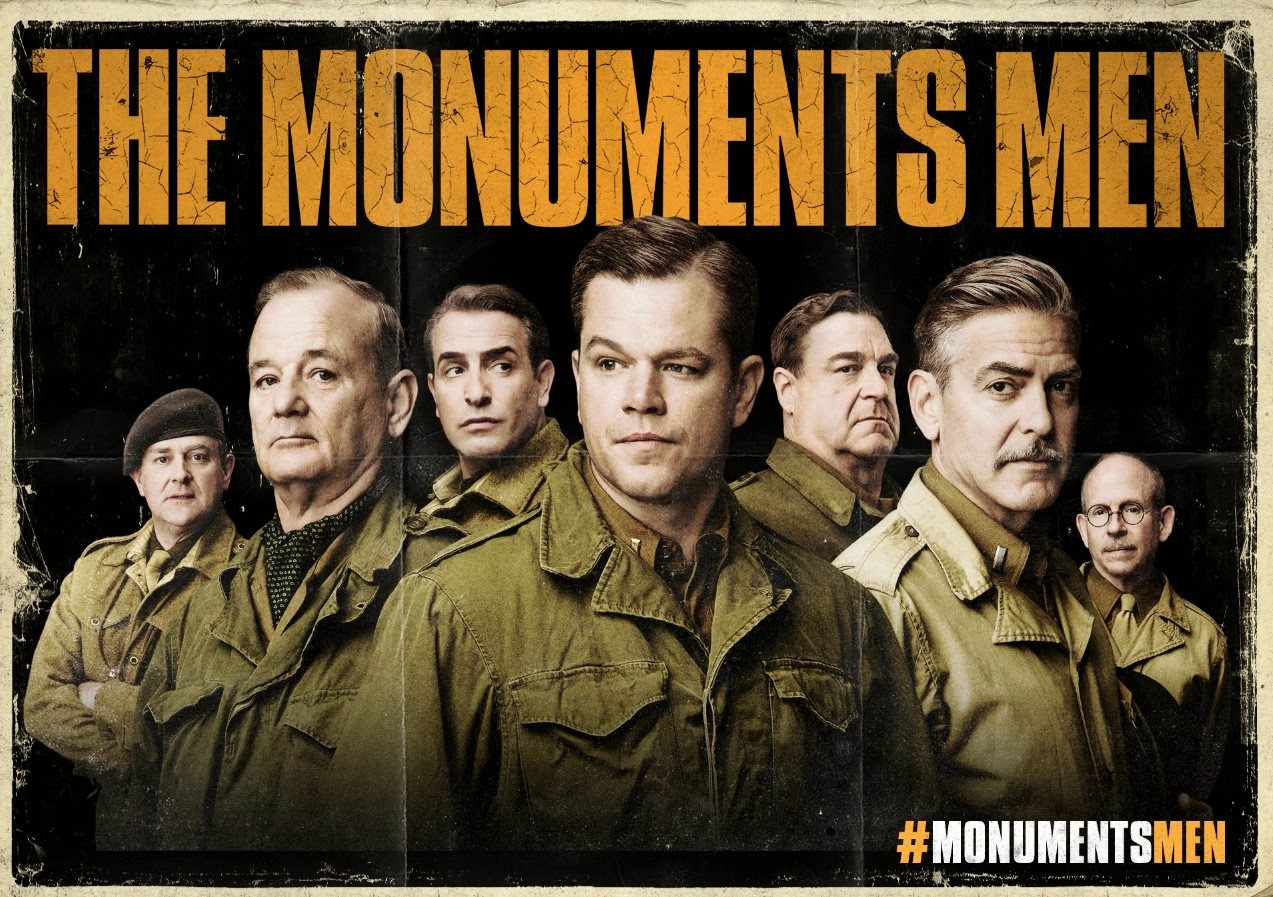 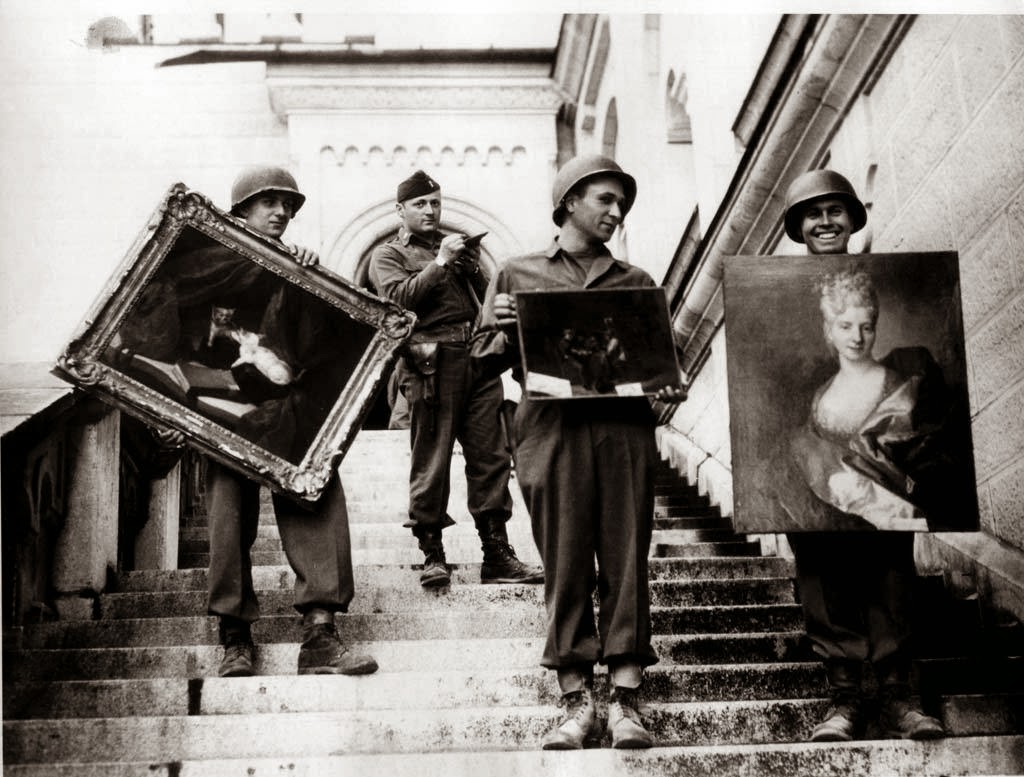 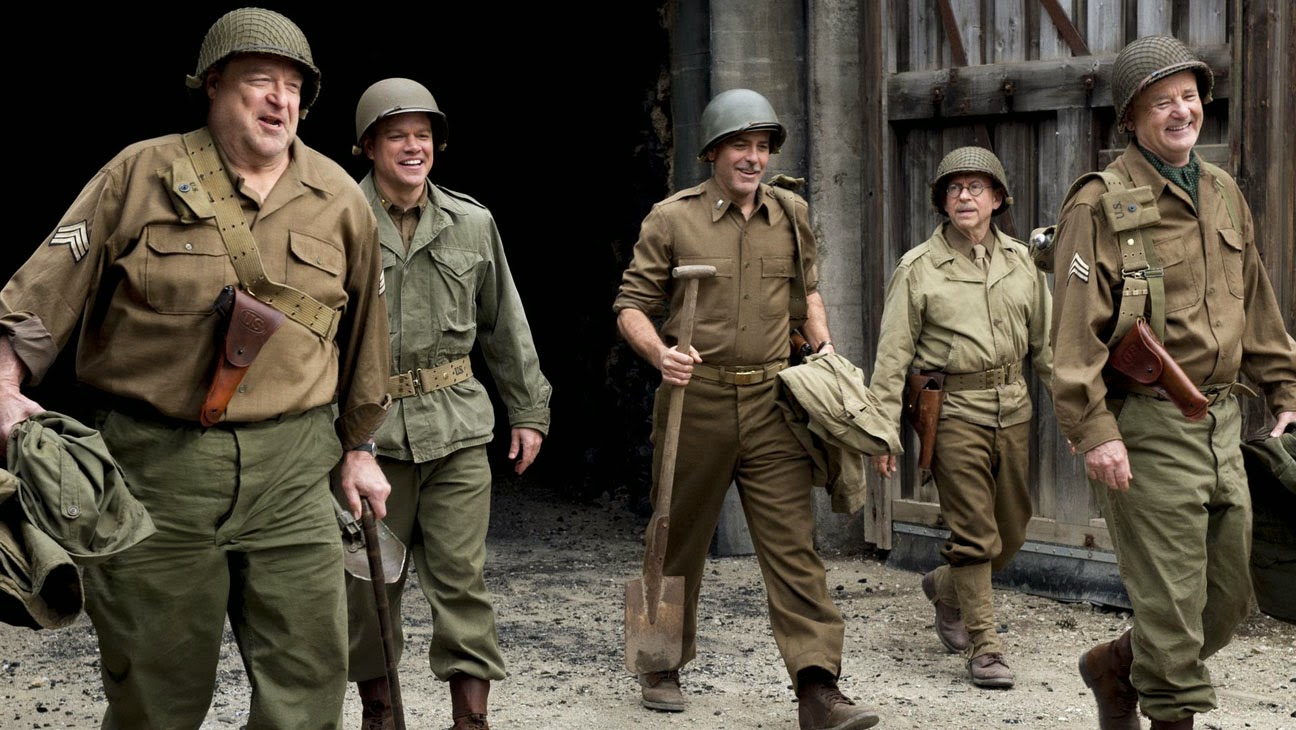