‘The Lego Movie’ Has Been Built Into Something Awesome (Movie Review) 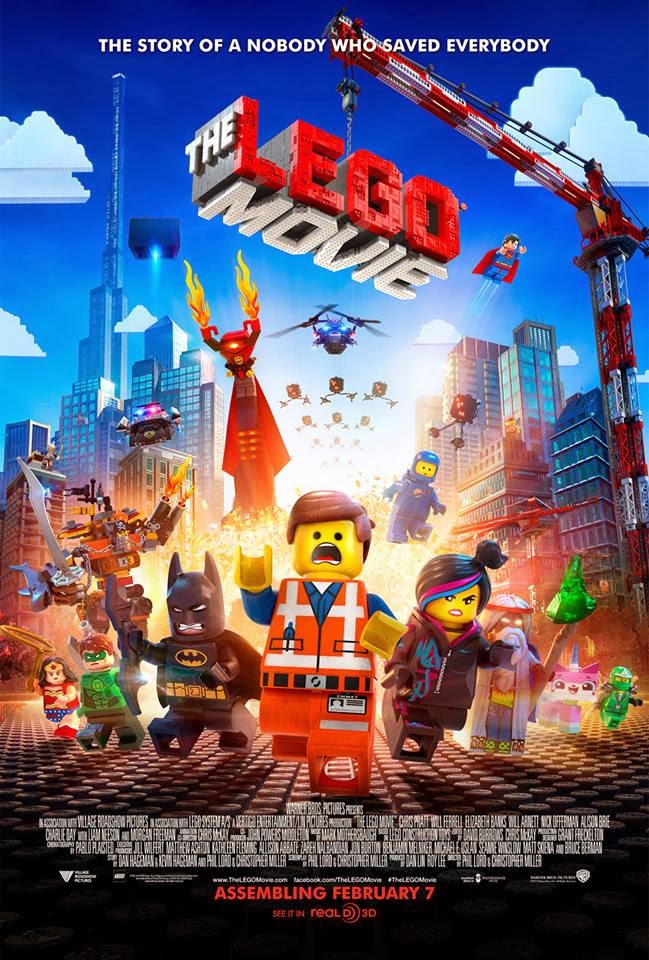 Wyldstyle:  Come with me if you want to not die.

This is one of those “expectations exceeded” situations.  I was already plenty happy to go into The Lego Movie, given the lively and fun marketing presented for this film, along with my knowledge that it has come from the directors or both Cloudy with a Chance of Meatballs and 21 Jump Street, films I very much enjoy, but the film did not just settle for being an enjoyable animated adventure, it succeeded at going even further.  Along with the humor and vast amount of creativity on display, The Lego Movie goes a number of steps further to really make it stand as something special.  It has fun with the familiar type of story it is telling and then pushes its own boundaries, adding even deeper levels to a film that features millions of blocks moving around the screen.  The added level of cleverness and heart makes this movie not only a lot of fun, but also quite awesome.

The main narrative is a familiar “hero’s journey” story, with the film sharing many plot points with The Matrix.  Emmet (voiced by Chris Pratt) is a normal construction worker who is very happy to conform to the everyday life of living in the big city, listening to the most popular song on the radio, and watching the most popular show on television.  That all changes when he stumbles on a secret, leading some to believe Emmet is “The Special”, a great Master Builder who can save the universe.  Emmet is now thrust into new worlds, with the help of an old wizard Vitruvius (Morgan Freeman) and his tough companion Wyldstyle (Elizabeth Banks), in an effort to stop the evil Lord Business (Will Ferrell).  With the help of some other diverse companions, including Wyldstyle’s boyfriend, Batman (Will Arnett), Emmet will do all he can to hopefully save the world, as well as prove that he is actually quite special.

Were the film to just be about this story at hand, it would be fine.  The Lego Movie is a wild burst of imagination, as it takes the popular brand and uses a convincing mix of stop-motion and CG effects to assemble one of the ultimate Lego adventures by way of characters, sets, and action sequences that have been achieved only by using actual Lego pieces.  The film looks great throughout, regardless of whether it is in 3D or not, and uses the inherent silliness of a Lego-only animation style to build some truly awesome sights to behold, without forgetting that this is a comedy and a film that should be able to work for all audiences.  The film moves at a near-breakneck pace and even when it stops to delve into the story, it has fun with telling its audience that the boring details of nefarious plots and vital prophecies are not as important as the fun characters who are involved.

Speaking of the characters, this whole voice cast seems to be made up of people who had nothing but unbridled enthusiasm for being a part of this film.  Chris Pratt has a relentless optimism in his voice that really sells the kind of person/figure Emmet is supposed to be, even in the face of danger or consideration for how he is regarded by others.  Morgan Freeman is very game to be in on the joke of playing a wizard who delivers sage wisdom and some of his line deliveries are downright hysterical.  Much of the same goes for Liam Neeson, who seems livelier than ever, given his role as a (very literal) two-faced cop.  And then there is Will Arnett’s Batman, who takes the film to a whole other level for me, given his portrayal as a cocky and arrogant type of Batman who is hilarious to watch.  There are plenty of other voice offerings as well, but it all fits the same level of praise, as the film makes sure to give all involved plenty of opportunity to deliver on the fun.

Emmet:  I know what you’re all thinking, “He is the least qualified person to lead us,” and you are right!

While I am not sure of whether or not the voices were recorded separately or together, it does seem apparent that screenwriters/directors Phil Lord and Chris Miller are getting their voices across in the kind of film they wanted to make.  There is a level of well-intentioned irreverence similar to the Muppets brand is there, but similar to that group’s most recent film, The Muppets, Lord and Miller have found a way to insert meaning within the colorful chaos of fun that is the familiar goal presented on the surface.  It would have been easy to simply say something along the lines of “it is okay to enjoy what is popular, but doing things for yourself is important too,” but a third act twist really turns elements of that message and more on its head.  There are many different ways to explain how The Lego Movie has a genius way of diving into the deep end of what it means to be a kids movie made by adults and is secretly for adults, but the easiest way to say it, without spoiling anything, is by simply stating that The Lego Movie is promoting creative storytelling and experimentation.

The film utilizes standard storytelling methods to get to this notion, while adding tons of wild Lego creations that serve as vehicles, settings, and other ideas along the way, but the film eventually finds a way to drive home the idea that it is great to be able to play in a sandbox where instructions can be optional.  Cloudy with a Chance of Meatballs was similar, as that film wanted to celebrate science, but utilized a popular children’s book and the satirizing of disaster films to arrive at its destination.  While I am aware that story credit also goes to Dan and Kevin Hageman, I am left with curiosity as to how much involvement they had in this other element that packs so much more interesting material into an already wildly entertaining film.

I can see how some may view this film as nothing but brand promotion disguised with an entertaining play on nostalgia, given that this is a film filled with nothing but the brand of Lego (never mind the fact that the word is never mentioned and the title does not appear until the end).  However, rather than seeing this as the things that could be built, were one to “buy this toy”, I was much happier viewing the film as a creative display of what could be achieved, because of an insistence to not let go of a sense of playfulness and willingness to walk to the beat of one’s own drum.  Will the turn late in the story throw off some who were happy with simply seeing a colorful blast of adventure infused with pop culture elements and minor meta-commentary?  Perhaps, but I was incredibly pleased to not only have a film that was insistent on delighting its audience, but have one that spoke positively about having a myriad of possibilities in situations that may call for it, rather than being purposefully limited.  Whether it comes down to building a spaceship, a Bat-Submarine, a double-decker couch, or anything else, it is nice to champion imagination, which is what The Lego Movie is happy to do, and that is awesome.

Vitruvius:  Emmet, don’t worry about what the others are doing.  You must embrace what is special about you.