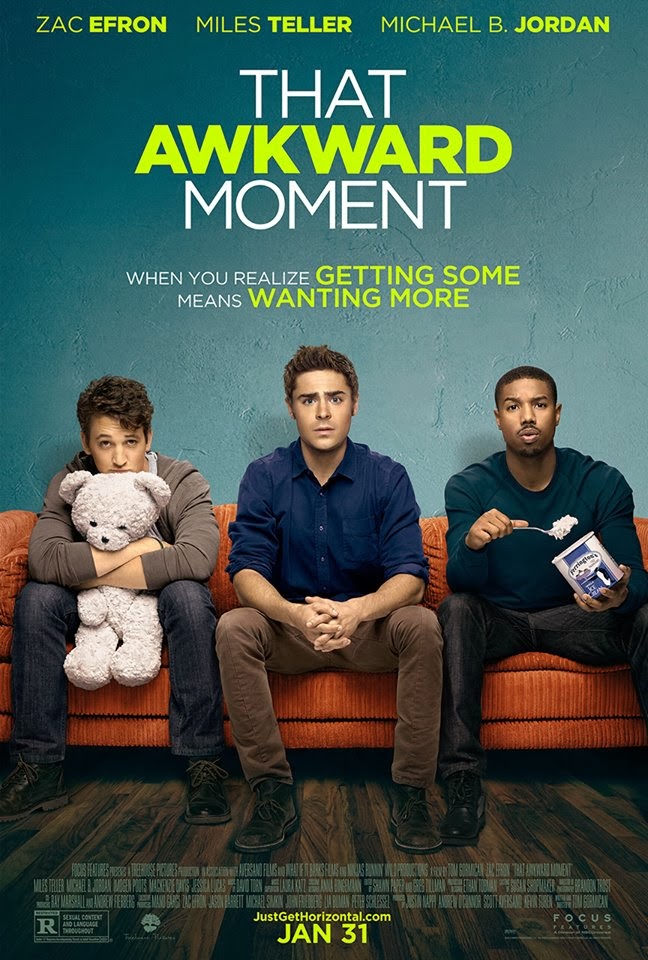 Jason:  If you’re single, we’re staying single with you!

A few days ago I was discussing the HBO series Entourage with some friends and going over how it began as a fairly entertaining series, but eventually amounted to some conflict that could be extinguished with the simple mantra of, “Vince and the gang are going to be alright.”  The show mainly relied on the easy-going dude chemistry between the guys (and Jeremy Piven), as they lived lives of luxury in Hollywood.  While the setting and premise are very different, That Awkward Moment had me thinking of Entourage quite a bit.  This dude-focused romantic comedy has fairly low stakes, features a group of people who are all fairly successful and especially well-dressed, and it never seems like there is much going on to threaten their existence.  I am not saying the world needed to be crashing down around them, but it is a fairly standard comedy that was rarely very funny and essentially amounted to the mantra of, “Zac Efron and the gang are going to be alright.”

Zac Efron, Miles Teller, and Michael B. Jordan star as three best friends.  Efron is Jason, a womanizer, comfortable with being a charming guy that does not seek relationships (he tells us plenty more of his philosophies on relationships via voiceover).  Teller is Daniel, another womanizer, who works with Jason, and has his friend Chelsea (Mackenzie Davis) help him hook up with girls.  Jordan is Mikey, a successful doctor, whose marriage to Very (Jessica Lucas) is about to end, which puts him back at square one.  Jason and Daniel make a deal with Mickey to stay single with him, in an effort to just have fun and avoid complications.  This plan goes south pretty quickly, as the guys find themselves getting inadvertently involved with different women.  Jason, in particular, strikes up a relationship with Ellie (Imogen Poots), who seems to be everything he actually wants, which of course throws him off his regular game.  Awkward moments abound, as the film continues on.

I can stop there, as the plot is pretty easy.  The appeal of this movie is supposed to be its cast’s chemistry, which does work.  Efron, Teller, and Jordan all work well together.  They play well-adjusted and well-groomed guys, which is almost too much of a stretch because of how great their lives outside of relationships seem to be.  Still, their interactions are the highlights of the film, as they are the only times when the film’s dialogue feels natural.  The female characters in this film are about as complicated as a dude-focused romantic comedy needs them to be, but they at least get to show some signs of intelligence, when it does not revolve around them needing some lovin’ from one of these guys.  The problem is how easy this all seems in a film that never balances its simple story out with being anything more notable.

Again, a film like this does not need to try all that hard to make conflict seem truly important, but it should at least aspire to be something fairly creative and it really doesn’t.  That Awkward Moment mines a lot of comedy out of riff sessions between the three guys and then uses a lot of seemingly clever and very “written” conversations when it comes time to separating these guys and have them interact with their various female counterparts.  Written and directed by Tom Gormican, yes, he is able to capture the chemistry on screen, but the dialogue really is not all that clever and when it tries to mesh the humor with the more “meaningful” moments, it feels rather contrived.  Sure, knowing where the story is going does not take a lot of effort and the film does not seem to think it is about to surprise its audience, but at the same time, capturing today’s twentysomething generation can only go so far if the comic beats are only hit so often and the emotion feels false.

As far as the leads in this cast goes, Teller and Jordan have obviously found a lot of praise in the time leading up to this film, given their work in The Spectacular Now and Fruitvale Station, but the film really wants to put the most emphasis on Efron, who is unfortunately the least equipped to handle the more dramatic parts of this film.  It may not be him, as I have little to go on, as far as his acting talents are concerned (never saw his more popular films and he was pretty decent in the otherwise terrible The Paperboy), but with the film providing us with a lot of time to focus on his redemption, it became pretty tiresome.  Teller and Jordan fair better, given that they are both quite talented.  Teller can be a bit of a mixed bag at times, because the guy obviously has a knack for talking in that fun, bouncy way that made Vince Vaughn, among other similar actors popular.  While I couldn’t stand Teller’s shtick in 21 & Over, it is better placed here, as it there is more of an attempt to delve into this character.  Jordan is not really known for wacky, crude comedy roles, so it is not that surprising that he is the most balanced individual, who does not wind up in crude, awkward situations.  With that said, he is fine here, despite having to be more of a reaction man to the other guys, while dealing with the most dramatic of the three stories, which is given the least amount of time to be fleshed out.

While mildly amusing at points, That Awkward Moment did not do much for me.  The cast is likable, but I have to continue to put emphasis on how comically fantastical their lives seem to be, given the nice locations, well-kept nature of the characters, and other aspects that really emphasize the New York setting, which really wants to call attention to itself.  Regardless, the film does not go overboard with raunchy antics, but even in its attempt to be a fun distraction, focused on guys of a certain generation, the film lacks much strength to earn huge laughs or affecting drama.  No worries though, because I’m sure Zac and the gang are going to be alright.

Daniel:  Hey, come here man.
Mikey:  Do not hug with no pants on. 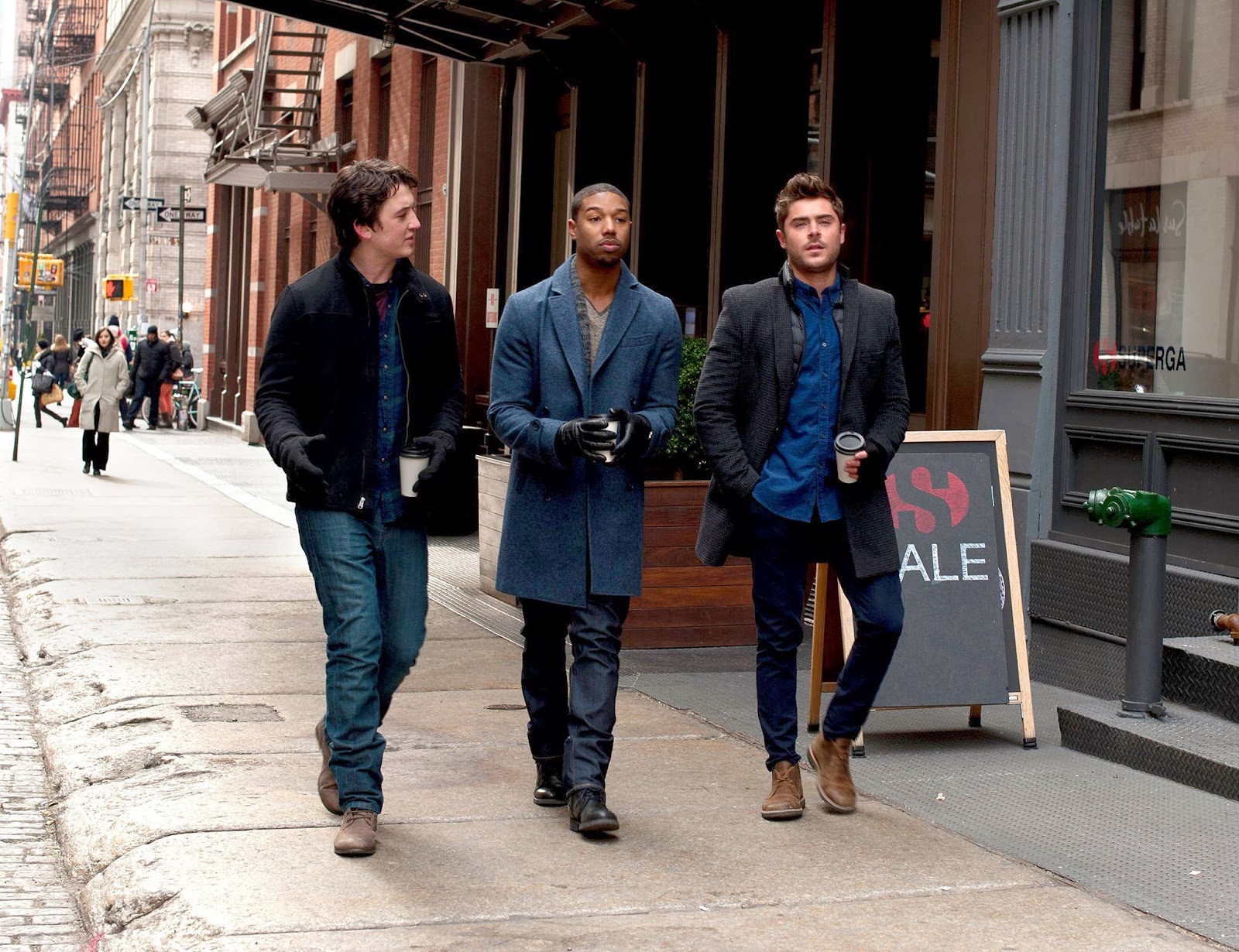 Aaron is a writer/reviewer for WhySoBlu.com.  Follow him on Twitter @AaronsPS4
He also co-hosts a podcast, Out Now with Aaron and Abe, available via iTunes or at HHWLOD.com.