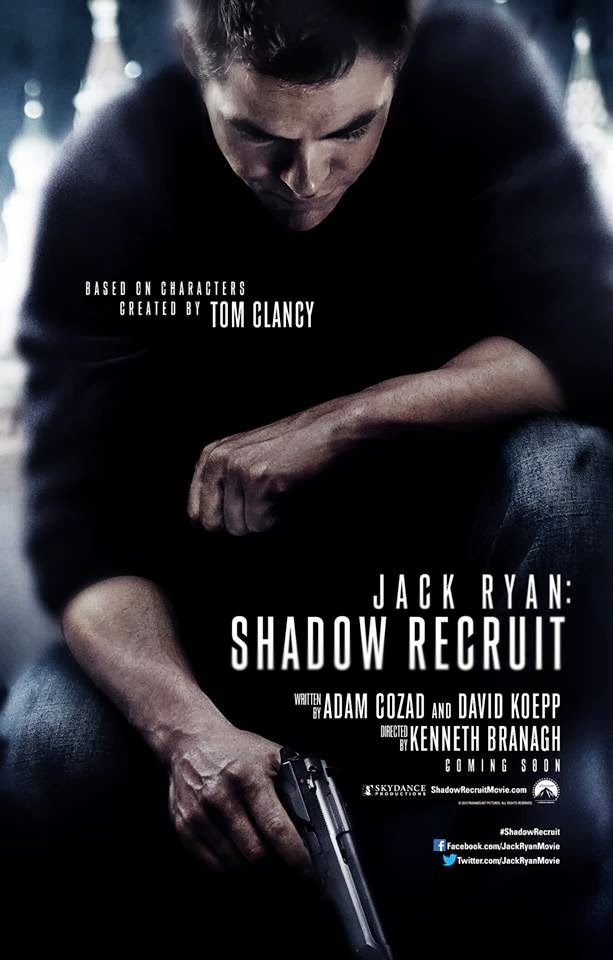 Does the world need another Jack Ryan?  The character, created by writer Tom Clancy, has never quite taken off, despite their now being five films that feature him.  The Hunt for Red October, Patriot Games, and Clear and Present Danger are solid spy thrillers/procedurals, but are not 90s films that many seem to single out all that often.  This sentiment was challenged in 2002 with The Sum of All Fears, the first reboot of the Jack Ryan character.  Despite receiving decent-to-positive reviews then, The Bourne Identity arrived around the same time, made around the same amount of money, but basically buried Ryan’s analyst ways, as audiences favored the kinetic spy action.  Now we have another take on the character in a new film that flirts with what audiences like in the Bourne films, but still tries to be a Clancy-style spy thriller.  The results are unfortunately very average. 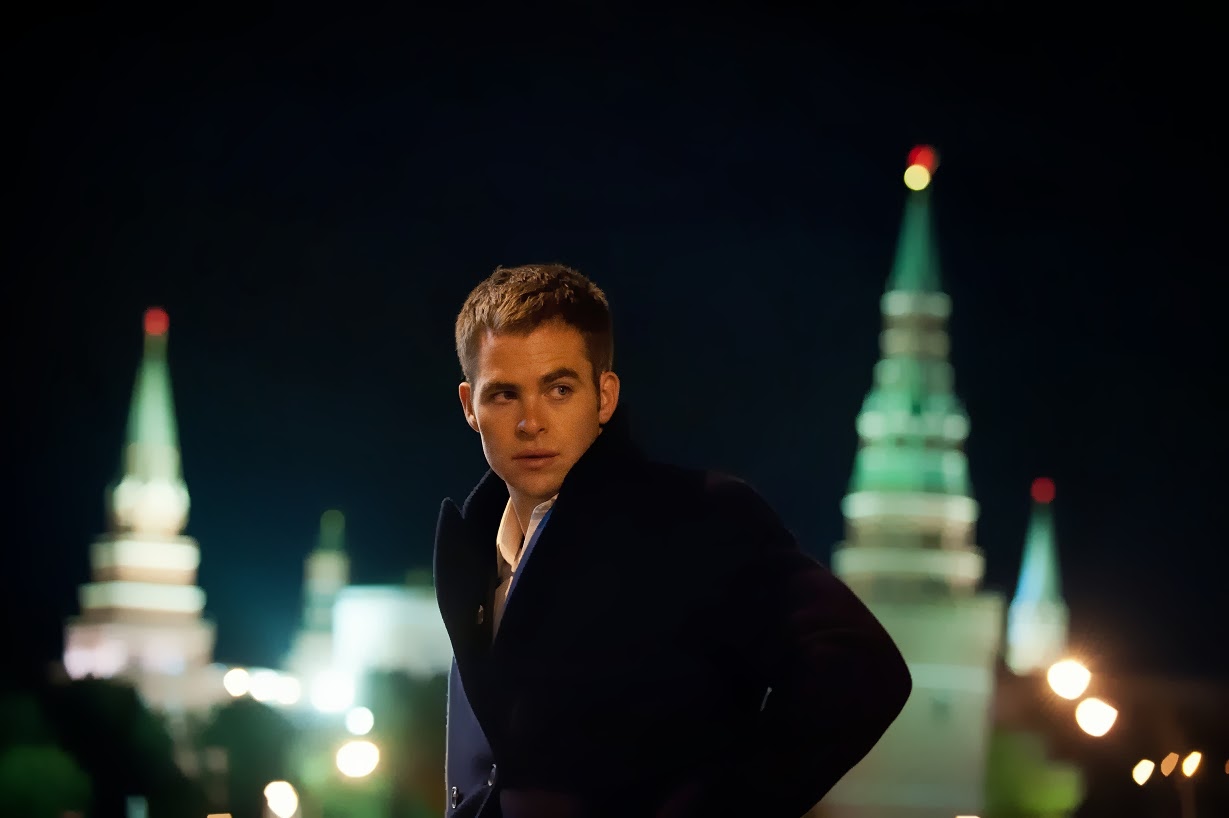 We have gone from Alec Baldwin to Harrison Ford to Ben Affleck and now to Chris Pine stepping into the shoes of Jack Ryan.  As the film starts, we are given enough information to know that Ryan is a smart and determined young man, who will do what he can to protect his country.  Other characters are established easily enough.  Kevin Costner co-stars as William Harper, the man who recruits Ryan into the CIA.  Kiera Knightley co-stars as Cathy, Ryan’s (American) girlfriend who is of course unaware of Ryan’s real job as a CIA analyst.  The film’s main plot is set into motion after Ryan inadvertently uncovers a possible terrorist threat connected to the Russian businessman Viktor Cherevin (Kenneth Branagh).  Ryan heads out to Russia, only to become more involved, as he is forced to do some work in the field, which could prove to be very deadly.

As Jack Ryan, I think Chris Pine does a fine job.  It is different enough from some of the other characters that he has had to play, while also stepping away from being too close to Jason Bourne or James Bond.  That said, the character does feel like a less interesting version of those characters.  It comes down to what we have seen in movies and on TV in recent time, and after four Bourne films, a handful of Bond movies, and shows like 24 and Homeland, seeing an earnest young man running around and aggressively downloading files from a laptop can only take me so far with excitement.  Balancing that with sudden skills as a professional stunt driver do even less for me. 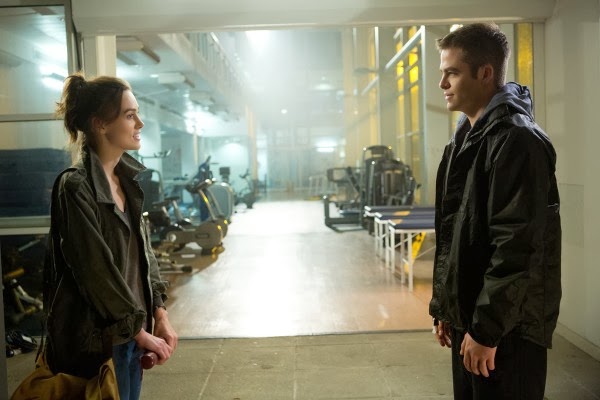 The film’s biggest issue is how straight-forward it plays.  Branagh also directed the film and he basically does a serviceable job here, but the script by Adam Cozad and frequent blockbuster scribe David Koepp seems very content on making this the safest reboot possible.  It is an arm’s length away from feeling like a Bourne knock-off, but there is little done to make this as intriguing as the other Jack Ryan movies, which all operate on a fairly cerebral level, despite being films that are easy enough to follow.  This was something I always enjoyed about The Sum of All Fears, which was a proper reboot for the character.  That was a film that did not rely on shootouts and damsels in distress, and even after it had a giant bomb go off in the United States, the story was still based around some fairly interesting ideas and characters making smart enough choices in the realm of movie logic, separating it from standard action flicks.  Jack Ryan: Shadow Recruit goes a more average route and it is telling in just the fact that this film is a lean 100 minutes without credits (the shortest of the Ryan films), that little effort is really needed to understand what is going on.

Pushing all of that aside though, the reason I can give a mild recommendation to this film is because of how fairly competent it is.  It comes down to expectations and while I was hoping there would be more going on in a new Jack Ryan film, as they tend to be a bit smarter than the usual spy-action thriller, I cannot deny that a spy-action film, such as this, being released in the early part of the year did not have me expecting all that much.  There are a couple of instances in logic that make little sense to me and the action is a bit too heavy on the edits, but I will say that I found much of this film entertaining.  The story plays out in a fairly unsurprising manner, especially given that I assumed there would be a big twist, but it is at its best when it focuses on its title character – Jack Ryan. 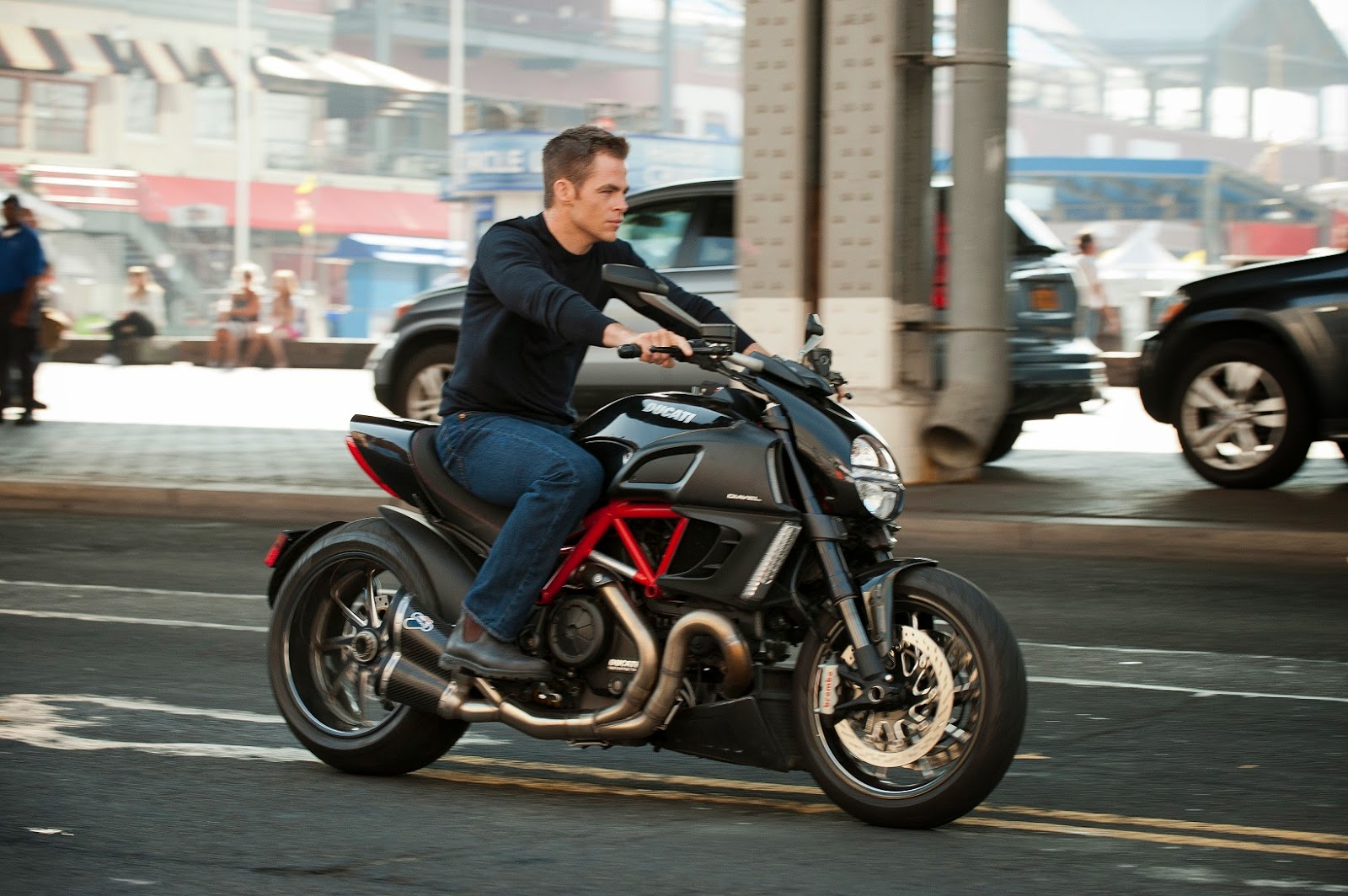 This brings me back to Pine, who I do think turns in a solid performance in a film that fits into a pretty standard mold.  It is not anything that makes you say “Pine is the best Jack Ryan ever,” but I liked the scenes involving him dealing with being new to violent field work, as well as pulling off a spy mission, and even when he deals with the love story stuff, which is nothing new, but tolerable.  I even liked the chemistry between Pine and Costner (who I loathe), which is saying something.

Jack Ryan: Shadow Recruit certainly has an issue with the adage:  “been there, done that,” but I at least enjoyed my time with it.  If it leads to more interesting Jack Ryan films in the future, great, but I can only hope it makes the character more interesting beyond just having a nice “getting his feet wet”-type performance by Chris Pine.  While I cannot say I have a huge investment in Tom Clancy spy thrillers, I do know how involved they can be and how effective they can be as films, if the time is put in to flesh out the story and interesting geopolitical aspects that come with it.  Sure, some brutal violence and a nifty car chase may be exciting to see on screen, but an analyst’s work is not always boring if it is handled properly.  We may be in a different age of spy thrillers, but the older ways can still work, given the chance. 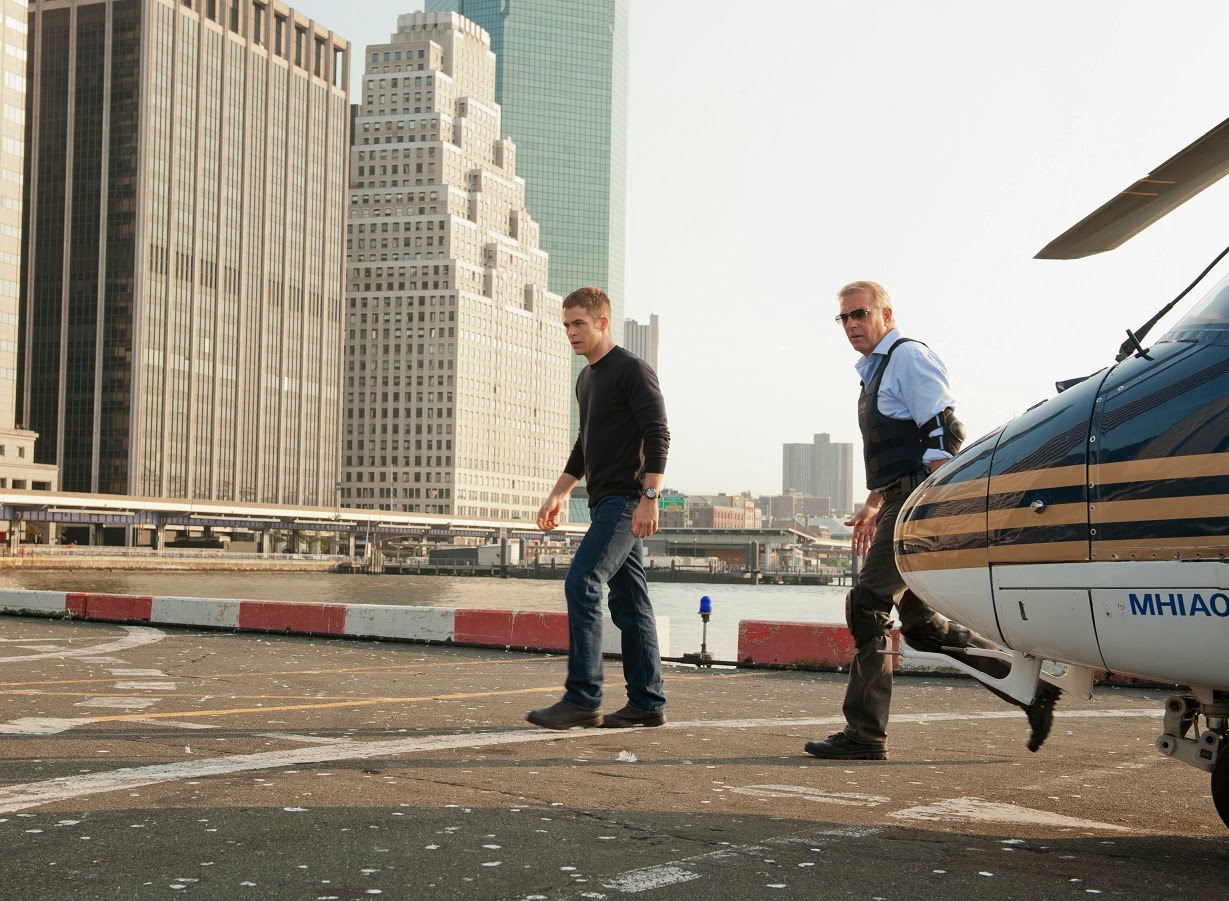 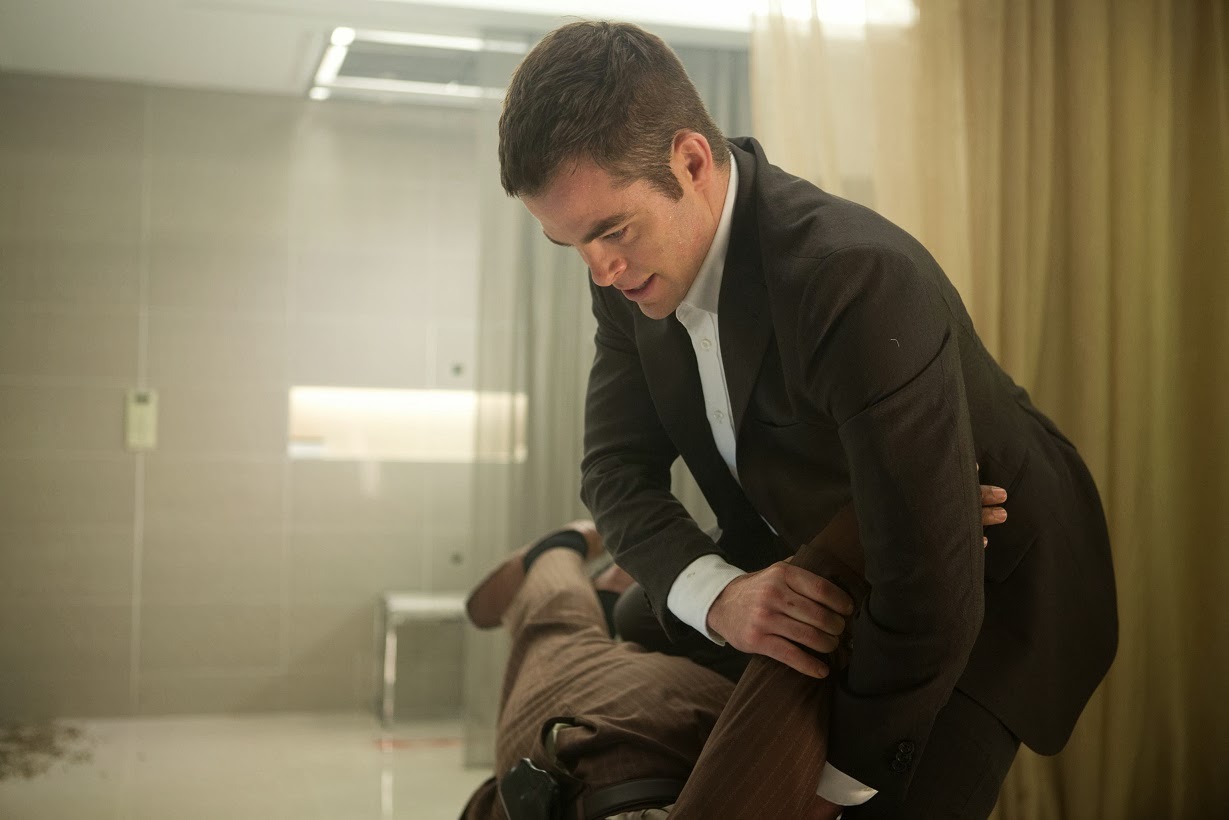