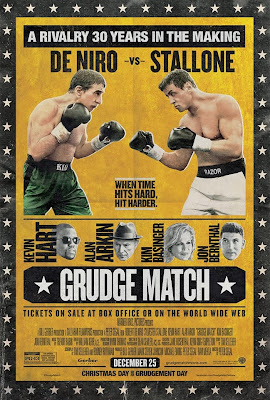 I honestly wish I could delve deeper into certain movies, but alas, I get incredibly busy and can only deal with certain movies to a briefer extent than I would like sometimes.  This is why I write these occasional "brief thoughts" posts on movies I have seen, as I want to at least offer some of my own perspective on them.  Below is a brief review of the 2013 Christmas Day release Grudge Match.

Billy 'The Kid' McDonnen:  The whole world's laughing at us! But we're not dead! In fact, I feel more alive now than I ever felt!

I guess one can say, "What did you expect," when it comes to sharing thoughts on Grudge Match, the boxing comedy that brings Sylvester Stallone and Robert De Niro together, playing up their ages, which is a far cry away from their times as Rocky Balboa and Jake LaMotta, but I guess you can call it morbid curiosity, mixed with the idea that I really did want to enjoy this film for what it was.  Unfortunately there really is not much in the way of redeeming value here.  Grudge Match is exactly the film one would expect, which basically amounts to lots and lots (and lots) of old jokes, with moments of sentimentality.  All of that, with the added bonus (or issue) of Kevin Hart tagging every scene with some of his brand of humor.

The plot is very straightforward.  Henry "Razor" Sharp (Stallone) and Billy "The Kid" McDonnen (De Niro) were once rival boxers.  The two both won a match against each other, but Razor called off the third bout and retired, before it could ever happen.  A documentary on HBO recounted this story, which leads to more and more interest in getting these two to fight in the ring once again (especially after the two are caught on YouTube fighting each other), despite their advanced ages.  Razor reluctantly agrees, while Kid is happy to finally finish what was started years ago.  Family stuff becomes a big part of this as well, as a former girlfriend of Razor's (Kim Basinger) and an estranged child of Kid's (Jon Bernthal) become a part of these guys' lives again, with a fight on the horizon.  Kevin Hart co-stars as the promoter trying to put this thing together and Alan Arkin steps up as Razor's former trainer, also pulled back into this nonsense.

Concept-wise, the idea of putting Balboa against LaMotta is a thing that is more fun to say than it is to see.  That is mainly because the film does nothing interesting with its concept of a "grudge match" taking place years later.  No one in reality would want to see two old, white people boxing, especially if it were to cost hundreds of dollars in order to attend said fight, or at least $50 to watch it on Pay Per View.  The idea of this movie is no less fantastical than the premise of Groundhog's Day. 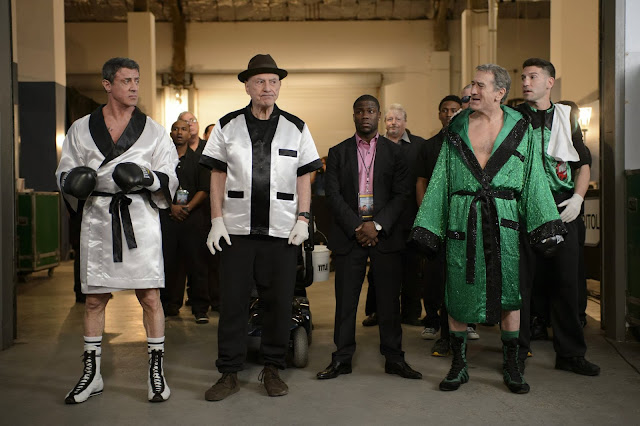 Still, let's go along with this.  Okay, so these two old, white guys are going to box each other.  What would be fun?  How about seeing them really dig into each other given their career histories, decisions in life, or anything aside from them being old.  Nope, that's not happening.  Aside from getting the basic details about who these guys are now, the only jokes this movie wants to offer are ones based around the fact that these guys are old and don't understand new age terms like "going viral" or "iPads".  I guess I should feel better, as we get montage's of these guys training and getting in better and better shape, but that would have to come with liking these guys. Unfortunately, that is only the case with one of them.

Sylvester Stallone manages to pull off looking good in this film, one-upping De Niro.  Stallone is definitely more of the straight man in this film.  Between the wise-cracks that come from Hart, Arkin, and De Niro, Stallone is fine with underplaying the role enough to make him the guy to root for.  I can't say the same about De Niro.  Even with a plotline revolving around the son he never really met, the fact is that De Niro's character is still an asshole.  While Sly's biggest problem in his life was wanting to focus too much on the thing he was good at in his prime, De Niro was an arrogant jerk during his prime and things haven't changed much since.  It shows, as De Niro is constantly very lively throughout this film, while Sly is happier to hold back in the same way that he did in Rocky Balboa, a superior film about what it means to grow older, while retaining a certain type of status in life and what that can mean to himself and those close to him.

I could ramble a bit more, but there is not a lot of point too it.  Sure, the movie has some one-liners that work, especially since it feels like Arkin and Hart were allowed to say whatever they wanted to make some laughs come about for everyone and not just those who love the "De Niro and Stallone are old jokes", but Grudge Match still does not accomplish much that makes a whole lot of sense.  Can I accept it, maybe, but the rest of the film still does not accomplish much to make it work, be it the comedy or even the attempts at drama.  There is an idea here that a film if a film slows down and has people talk in a more serious way, then that means it automatically earns its points for having heart, but that is not really the case.  I get what Grudge Match wants to do, but it is not so much earning the title, as it is just using dirty punches to go for the win.

Sally Rose: No matter how hard you guys work, you won't be your best.
Henry 'Razor' Sharp: It's the best we got. 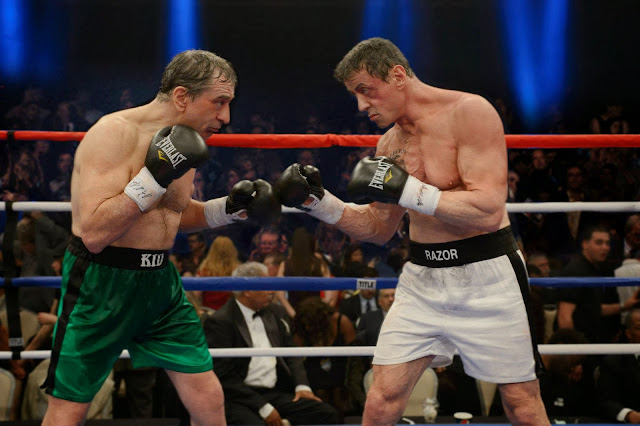