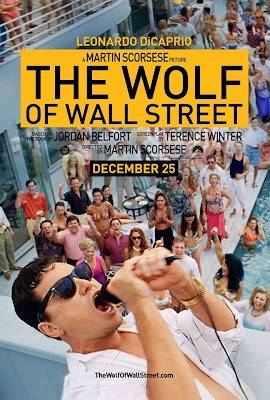 Real life can be a funny thing, mainly because it happens differently to everyone and all you can really do is react to the different stories you here.  I haven’t read the memoir by Jordan Belfort, but the movie based upon it features a lot craziness that can seemingly only be matched by Roman orgies.  Here is a story that is based on reality and can really only be accepted as truth, because the events that take place are just way too wild to have come from anywhere but reality.  The Wolf of Wall Street is a Martin Scorsese film that is impeccably made, despite the long runtime, and features enough lunacy to fill in the requirements for another trilogy of Hangover movies.  All of this and the film still features some of the finest acting work from its star Leonardo DiCaprio, who was hell-bent on getting this film made.

The film is based around the life of Jordan Belfort (DiCaprio) and his rise from a naïve New York stockbroker to drug-fueled madman, where sex, money, and Quaaludes have essentially replaced his breakfast, lunch, and dinner.  Of course, one has to start at the bottom, before they get to the top and that is what The Wolf of Wall Street does.  It is of little surprise that the film follows a formula so close to other stories of the “rise and fall” of some famous or infamous person, but it makes little difference, as there is so much to tell about Belfort’s life along the way.

It is interesting to see what pushes Belfort in the directions he goes.  Early on in the film, a portion is devoted to the first big Wall Street job that he had.  This is where the few scenes with Matthew McConaughey come into play, as McConaughey plays Belfort’s first boss, Mark Hanna.  Scorsese is really just giving us a taste of what is to come, as the drugs and the sense of coming corruption ooze out of this character and Jordan does little to back away from the freedom that comes with having so much power (i.e. money), aside from just order water, because he is still thinking that the world he is in can be handled by acting sociable at 10AM.  As things progress, there will be next to nothing that holds Jordan Belfort back from doing what Jordan Belfort wants. 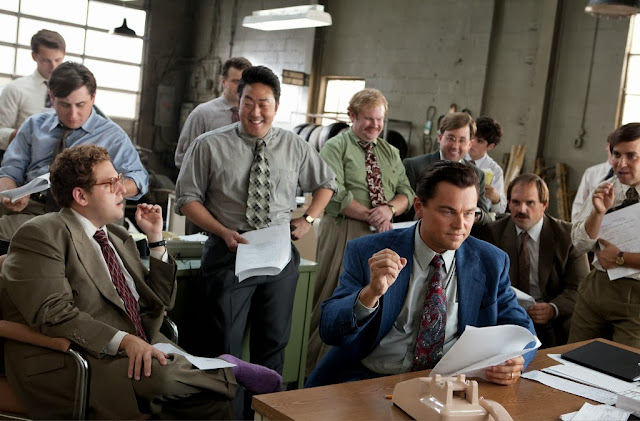 The direction of this film has been compared to Scorsese’s work on Goodfellas.  I can see that, I guess (though Casino makes even more sense to me), but it hardly makes a difference.  What I am seeing on screen is that of a 71-year old director continuing to fly by the seat of his pants, as he, his longtime editor Thelma Schoonmaker, and the rest of his crew do their damndest to make a film that careens forward, head first, into a world where nothing is off limits.  There is no expectation of the audience to like Jordan, let alone his ridiculous employees that stick with him (we’ll get to Jonah Hill in a bit), but it is hard to help but be fascinated by the excess on display, which is something Scorsese can excel at, because he knows how to depict process on screen, while also utilizing expert handling on pacing in his films.

As the story progresses for Belfort, so does the excess, and this is where I have to not only commend Scorsese, but Leonardo DiCaprio, who gives one of his loosest performances ever, which also happens to be one of his best.  As Jordan Belfort, DiCaprio is given a lot to do, but I think the most important thing is that he has to be funny.  Now, DiCaprio has certainly said humorous things in films before, let alone had to put on a one-man variety show, while under makeup in J. Edgar, but The Wolf of Wall Street really allows him to go bananas in terms of speeches, one-liners, conversations and activities with his buddies, and a lot of physical comedy.  Given how ludicrous some of the situations are in the film, it only helps that so much of it is played for laughs, even if it is in the darkest manner possible, and DiCaprio really goes for it in this film.  Personally, while I have enjoyed the previous collaborations between DiCaprio and Scorsese (with Shutter Island standing as one of my favorite Leo performances), The Wolf of Wall Street seems like the most accomplished one yet. 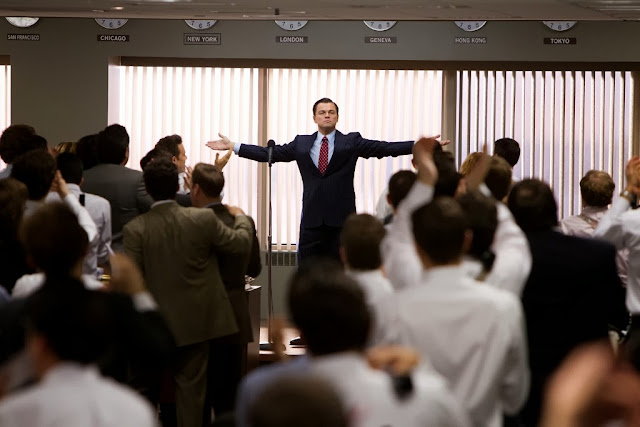 The rest of the cast is seemingly up for anything as well.  I have already spoken about McConaughey, but he does not factor much into this film.  The real piece of work comes from Jonah Hill as Donnie Azoff, who provides a source for even more depravity.  Hill may just be finding a way to bring his manic energy from Apatow-related films into a “prestige” Scorsese feature, but it is really effective, as his chemistry with DiCaprio, along with some of the others in this film is very strong, most notably with The Walking Dead’s John Bernthal as Brad, a weight-lifting drug dealer.  Among the others here, I also have to shout out Rob Reiner, of all people, who is really funny as Belfort’s dad, and Margot Robbie as Belfort’s second wife Naomi, who provides some really strong supporting work that will likely go overlooked.

It is hardly much of a fault for the film to have to calm down at a certain point, given how the story progresses, but as Jordan Belfort’s business and wild activities starts to become a liability, thanks to an FBI Agent (a very good Kyle Chandler) breathing down his neck, drastic measures have to be taken that lead to the inevitable darker turns in the story and fallout from everything that came from partying on top, without looking back.  Sometimes a film wants to moralize this portion of its story, but I cannot really say The Wolf of Wall Street really wants to do much of that.  “Power corrupts” is an easy mantra to keep track of, but that comes with the territory of this type of film that has more of a desire to play out in a compelling, yet fun manner, despite the fact that we are following an anti-hero. 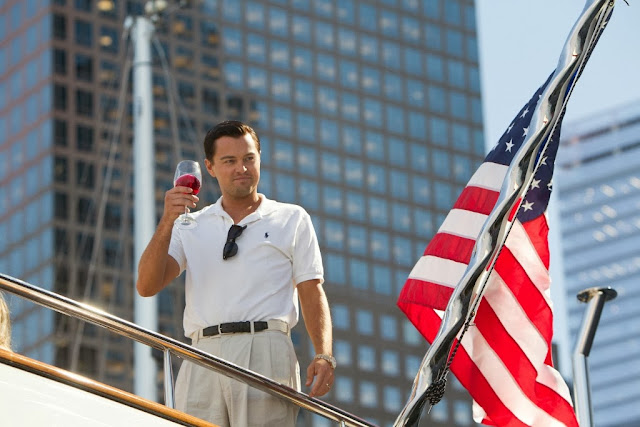 Being a “fun” film is what The Wolf of Wall Street amounts to.  It is a heavily excessive film, deserving of its very hard R-rating, given the vulgarity, sexuality, and copious substance abuse on display, but one that does little more than depict the madness of one man’s expansive empire.  It only helps that Scorsese’s direction is so relentless, DiCaprio and the supporting performances are so solid, and the film manages to make so much greatness out of this story that it does not matter whether or not it has to hold up to other Scorsese classics, as time moves forward.  This is a film that wanted to sell me on why I needed to see a fictionalized re-telling of some guy named Jordan Belfort, and it very much succeeded.

Jordan Belfort:  The only thing standing between you and your goal is the bull$h!t story you keep telling yourself as to why you can’t achieve it. 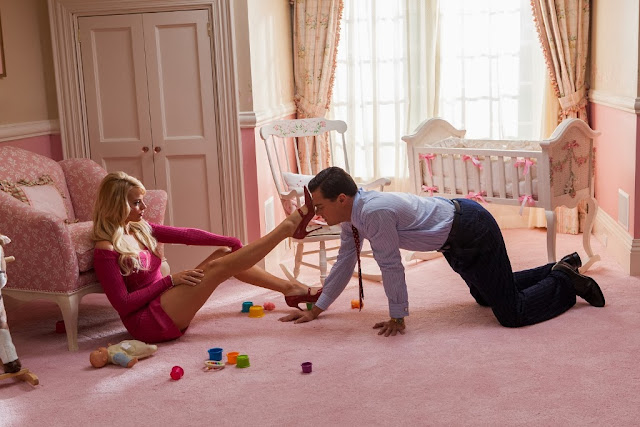 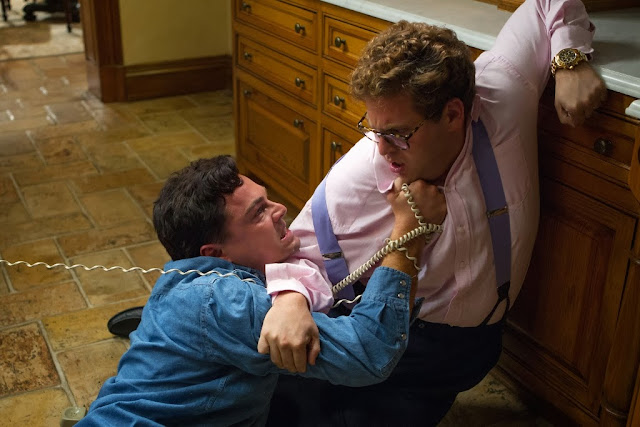 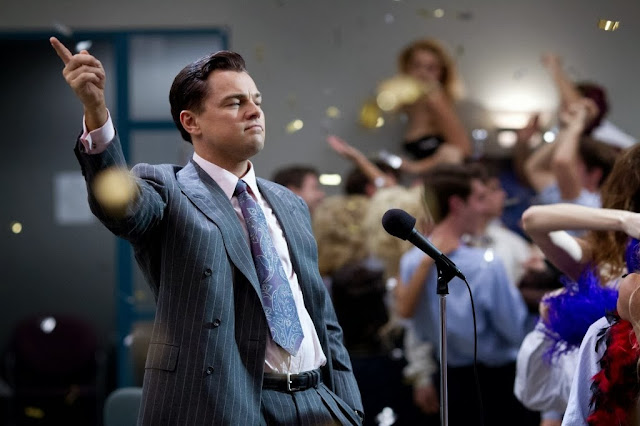