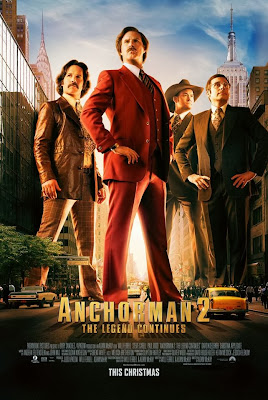 Ron Burgundy:  I’m gonna do the thing that god put Ron Burgundy on this earth to do:  Have salon-quality hair and read the news.

I have recently had discussions about comedy sequels with some friends.  They are not easy to pull off, which is obvious just due to the fact that it is hard to name more than a couple comedy sequels offhand that really match up to the original film.  For all the fun I had and continue to have with Anchorman: The Legend of Ron Burgundy, it is not necessarily a film that screamed for a sequel.  A modest success at the time, which (as many comedies do) found a lot more success on home video, Anchorman is the kind of weird and endlessly quotable movie that hits just the right beats for a lot of people.  Now the stars were able to finally align, as all the…stars were able to get back together for another madcap comedy adventure based around a team of doofuses that like reading the news together.  The results will no doubt vary for many, but I laughed a lot during this film. 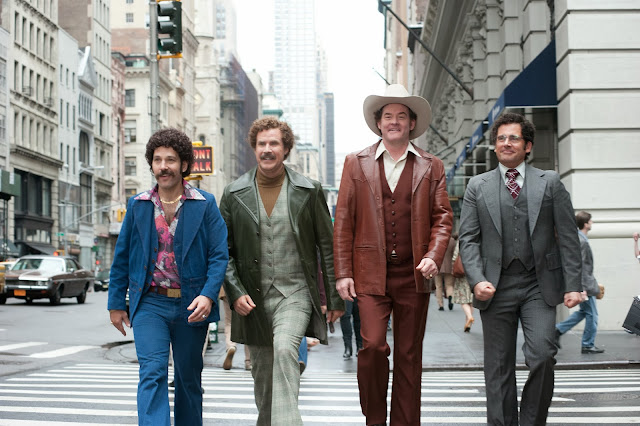 Not a whole lot can come from really explaining the plot of this film, but let’s give it a try anyway.  The 70s are coming to a close and Ron Burgundy (Will Ferrell) is given a new opportunity in life, when he is recruited to join the first 24-hour news channel.  This leads to getting the old news team gang back together (Paul Rudd, Steve Carell, and David Koechner) and heading to New York to make this all happen.  The big city setting will lead to lots of interesting changes, including encounters with other hot shot reporters like Jack Lime (James Marsden), dealing with a fiery producer, Linda Jackson (Megan Good), and of course watching Ron deal with his own wife, Veronica Corningstone (Christina Applegate).  Ron will have to balance his rise to the top of news anchor stardom with keeping an eye on his various loved ones, including his friends, family, and loyal beast, Baxter, of course.

There is no way to get around the fact that this is a sequel to a movie that people either love or do not really care about.  With that said, having nearly ten years to come up with something new, I am very glad (and also not surprised) that writer/director Adam McKay and co-writer/star Ferrell were able to come up with a script different enough from the first film, as opposed to simply repeating the same story in a different setting.  While there are certainly plenty of call backs to the first film and an increase of certain elements that people love about the first film, Anchorman 2 certainly feels like a different sort of crazy comedy. 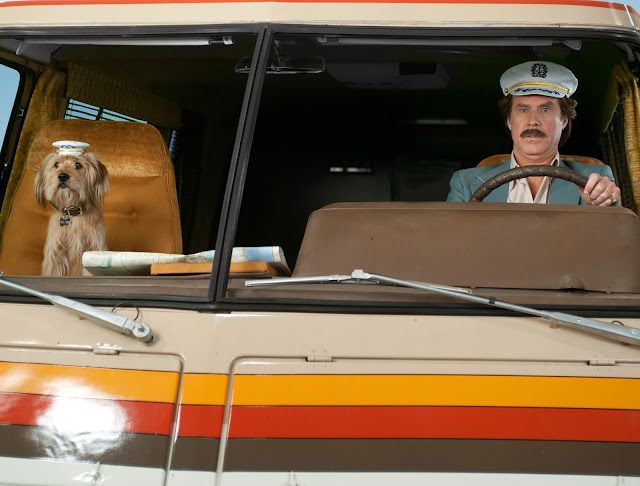 Given that this is a comedy, crazy or otherwise, it will always be hard to really sell someone on whether or not they will laugh.  This is especially the case of a film like Anchorman or Anchorman 2, as they are both the kind of films (along with most of the Ferrell-led features) that rely on gag-a-second type comedy.  The results can be hit-or-miss for some or ridiculously consistent to others.  Then there are those who just won’t laugh at all.  Personally, I laughed a lot.  Some of it comes from the various one-liners, some of it comes from the visual humor, and some of it comes from the various shock humor moments, including the smorgasbord of cameos in this film.  It will be hard to tell what jokes are really going to stick with you and what ones will where off, given that the surprise element involved in many of them is a big part of it, but I still cannot deny some of the hysterical fits that I was getting into in places.

This is where it really gets tricky, as it can be easy to say that this film is not as quotable as the first or lacks that extra something special.  The thing about this is:  how do you really know? Who is to say what will and won’t become quotable over time?  I was not a reviewer on the level that I am at now when the first Anchorman came out and did not have to really worry about analyzing that film on any other level aside from how much I enjoyed the film as a comedy.  Now, in a time when a level of cynicism can really outweigh genuine appreciation, there is likely a small percentage that simply does not want this film to succeed at all.  I cannot speak for that crowd, but what I can say is that I like to laugh during comedies and this was a film that made me laugh quite a bit. 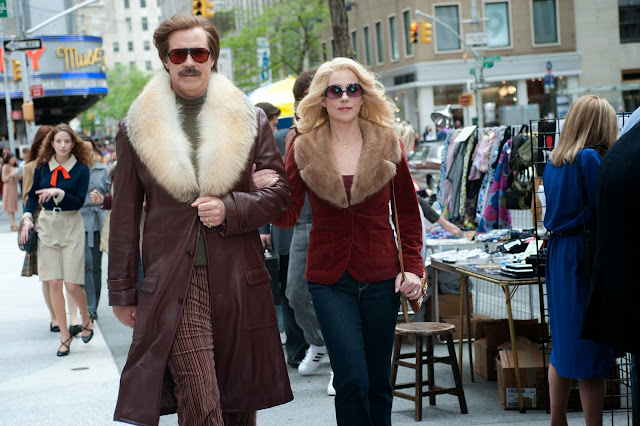 I guess that comes from expectations as well.  It is not that the humor is incredibly smart in this film (though there are some inspired ideas), but it is coming from people who are smart about comedy and are, at the very least, not lazy about it.  Anchorman 2 could have easily pulled a Hangover 2 or an Austin Powers 2 and simply repeated every single beat from the first film, in the same order, and found mild success in reworking the same gags, but it doesn’t.  It is not exactly doing anything much deeper either, but it at least attacks the comedy battlegrounds of idiot news anchors in a big city from a different angle.  Amidst the lunacy, McKay and Ferrell even find a way to put a little something extra in regards to the state of TV news reporting and how it is watched today.  The social commentary is not as in your face as it was in something like The Other Guys, but it is not without some minor digs either.

Admittedly, as a film, there are certain aspects that do feel problematic.  As is often the case with Apatow-produced comedies, there is certainly more film than really needed here, with a runtime that could have come down a bit.  Additionally, as opposed to the first film, which was largely plotless, up until the final half hour, Anchorman 2 is actually the reverse.  The film is very plot-driven in its early portions, before meandering all over the place in its final half hour.  There is still a level of anarchy-style comedy present, which is arguably when this film and other Ferrell films like it function best, but it does put that up against testing an audience’s patience.  Is it more enjoyable to watch Ron deal with the rivalries in the newsroom or bottle-feeding a shark?  Sometimes that is the kind of question you have to ask yourself. 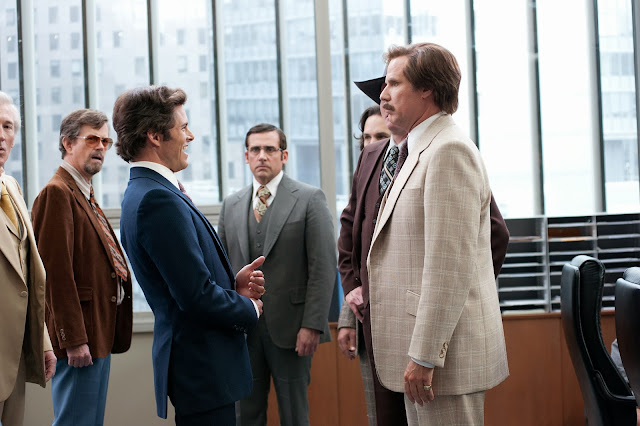 The question I ended up asking myself is whether or not I would want to see this movie again.  The answer is yes, along with the hours of extra material that will no doubt arrive on the eventual Blu-ray release.  The fact is that Will Ferrell makes me laugh.  This cast makes me laugh.  The obvious love that these guys have for these ridiculous characters and the world they have built around them is clear enough to me and I am happy to go along for the ride.  There is no way I could walk into Anchorman 2 and just expect to have a new comedy classic on my hands, but at the same time, there is no reason to go into a movie with the main goal of being a funny good time at the cinema and attempting to analyze all the reasons why it’s not as good as the first film or any superior comedy.  I was happy to go in and have fun, and besides, sometimes you just have to say, “When in Rome…” 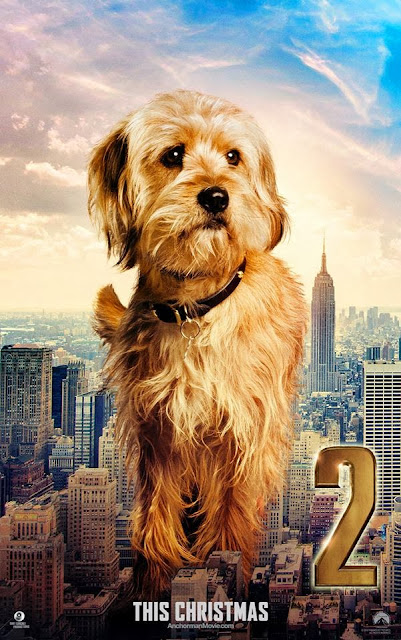 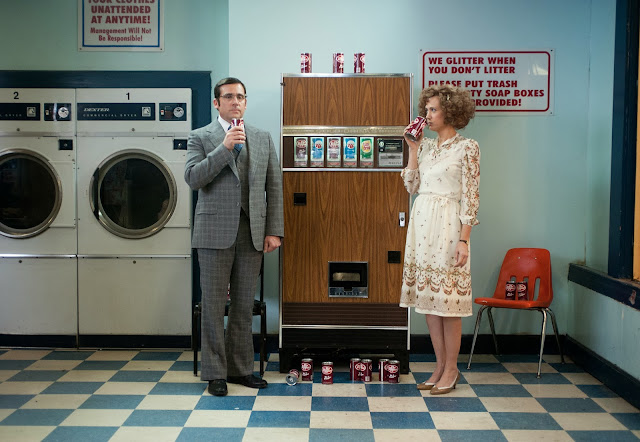 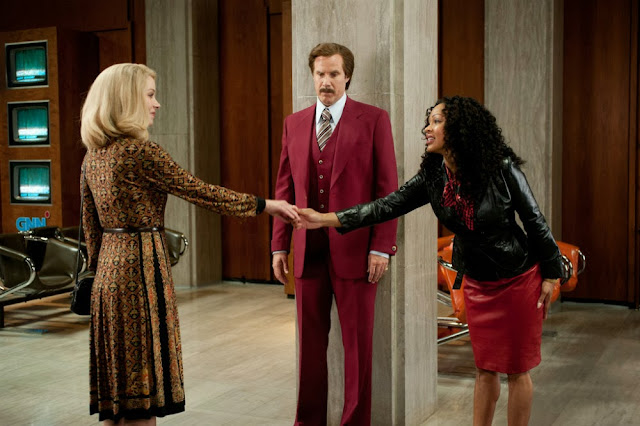