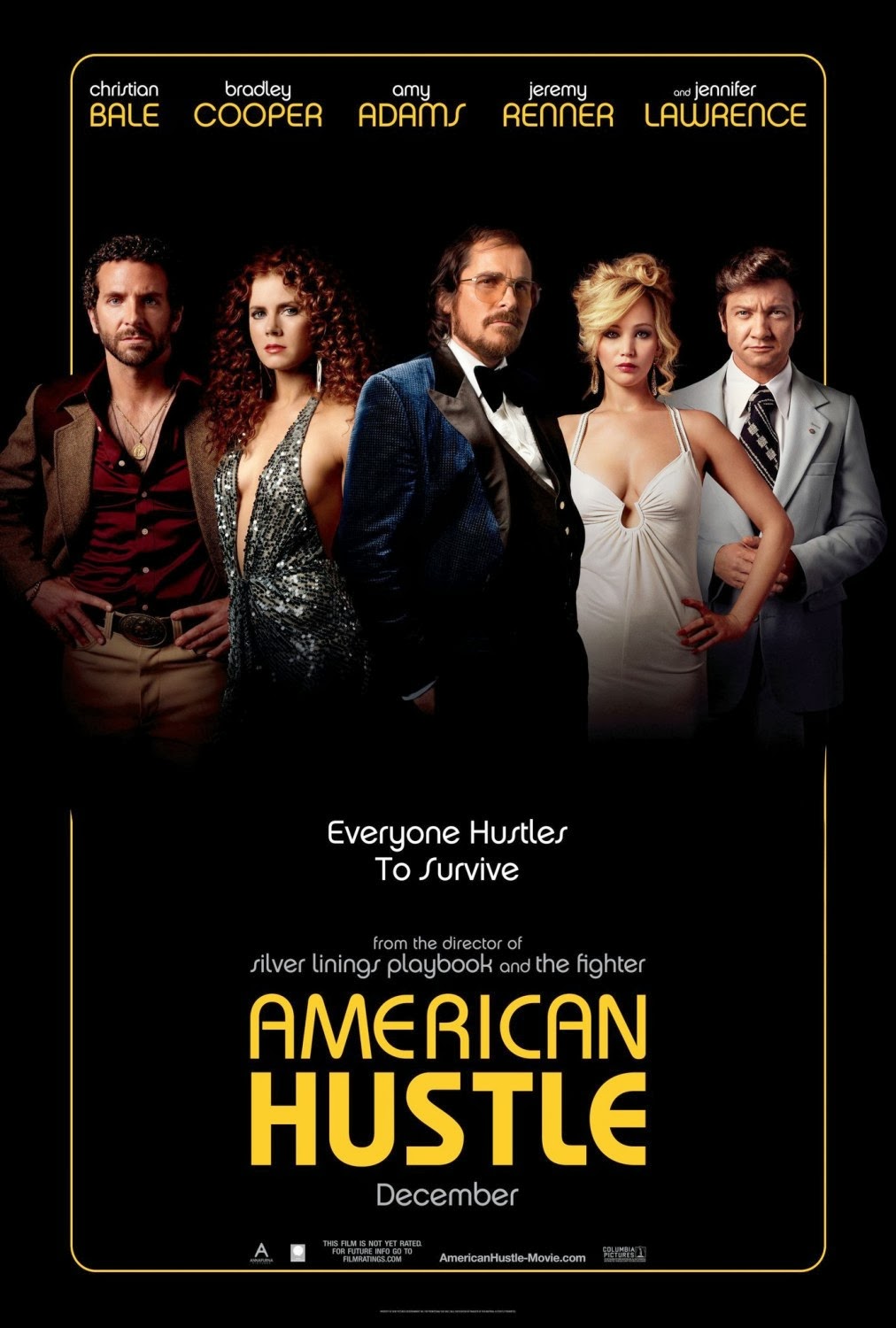 American Hustle: 4 out of 5

Irving:  Who’s the master?  The painter or the forger?

A lot of times I see films that seem to ooze a lot of cool and pizazz, regardless of substance, from directors I enjoy.  My go-to example of this tends to be Steven Soderbergh and Ocean’s Eleven.  What helps is how that film and others like it also have a collection of actors turning in really solid work, even in the midst of a story that is more about having a fun time.  American Hustle, from director David O. Russell (Silver Linings Playbook, The Fighter, Three Kings), has this kind of vibe.  It loosely bases a story around true events, but is really more of a fun ride, filled with the styles of the 70s and a Scorsese-like drive to be a sexy, violent, and often funny piece of entertainment. 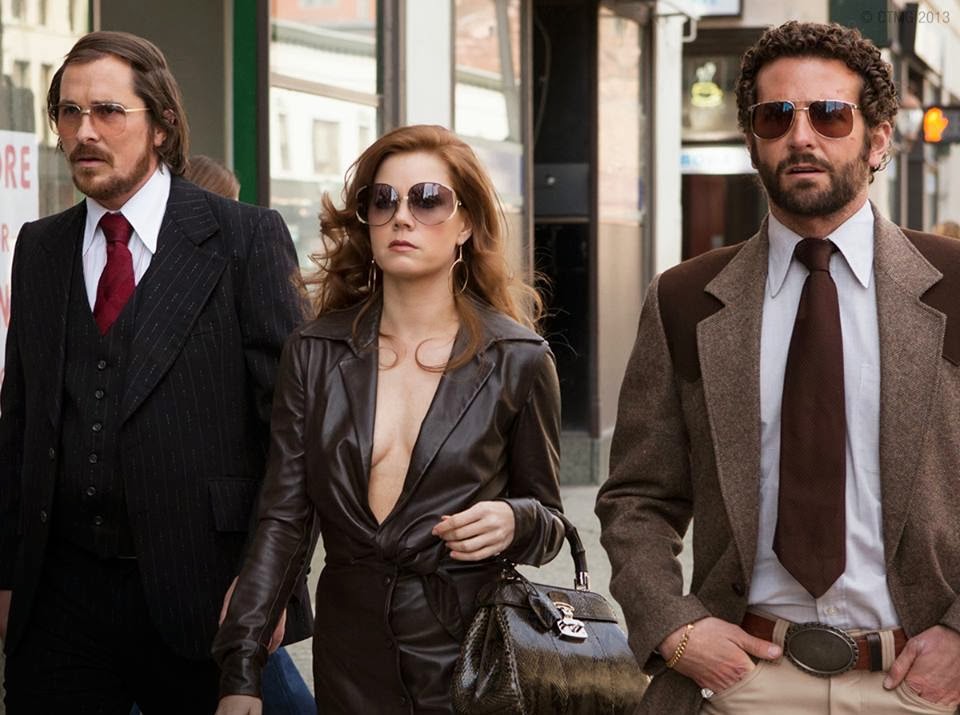 The story is set in late 70s/early 80s New Jersey and New York.  It is a crime-comedy-caper film, using the real life FBI ABSCAM operation as a main part of the plot.  Christian Bale stars as Irving Rosenfeld, a skilled con man who falls for an equally cunning woman, Sydney (Amy Adams).  The two manage to pull off many easy cons together, but are eventually forced to work for the FBI, after being trapped by Agent Richie DiMaso (Bradley Cooper).  DiMaso wants to use Irving and Sydney to capture various corrupt officials and mafiosi.  They will accomplish this by going through the Mayor of Camden, New Jersey, Carmine Polito (Jeremy Renner).  The plan should work, giving the talent of the grifters involved, but the testing of the strengths of these different relationships will get in the way…along with the unpredictable presence of Irving’s wife Rosalyn (Jennifer Lawrence).

Let’s get this out of the way right now, my title does not suggest Christian Bale is bad in this film, but rather that he is not quite as sexy as his co-stars, despite being quite charismatic and providing another fantastic performance, on the heels of his work in Out of the Furnace.  Here is an actor that gained 40 pounds and wore an “elaborate” comb over in an effort to get into the mind of a con man.  Bale is known for going these kinds of lengths for role and I am not about to say this surpasses all of them, but I cannot deny that Bale continues to be impressive in the way he morphs into different characters.  A lot of similar praise can go to the other actors as well. 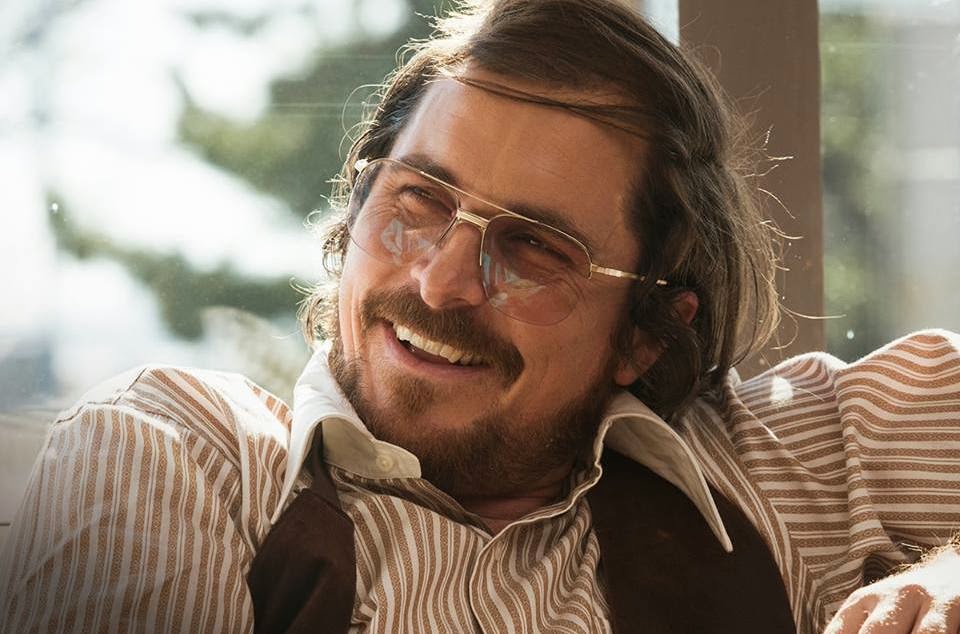 The neat thing about this cast is how David O. Russell has essentially made his own version of The Avengers.  No, the characters do not come from previous films, but Russell has taken a good portion of actors he has worked with before (not counting George Clooney for obvious reasons, if you know about the stories surrounding Three Kings, but also not counting Mark Wahlberg, which is strange, as he was Russell’s most frequent collaborator) and put them all into this movie.  He even added Jeremy Renner, though not as a talented archer.  Regardless, this is an ensemble film and while Christian Bale makes for a very strong lead character, the others are very good as well.

Amy Adams fits well here as a woman that challenges her male pursuers.  Irving obviously desires her for all of her cunning and beauty, but Richie also falls for her, despite not having as much of a grasp on who this person really is, as he may think.  In all this, Adams, with all her hair and cleavage-heavy dresses, does a great job at holding her own and being something of a voice of reason (despite being a con artist) in this boys club.  Some of the same type of praise goes to Jennifer Lawrence, who is the wildcard of the group, as she is this mess of a woman that wants to be more involved in Irving’s life.  Her ways of getting to him are insane (and hilarious) and Lawrence is in the film just enough to really provide a different kind of fun for this story. 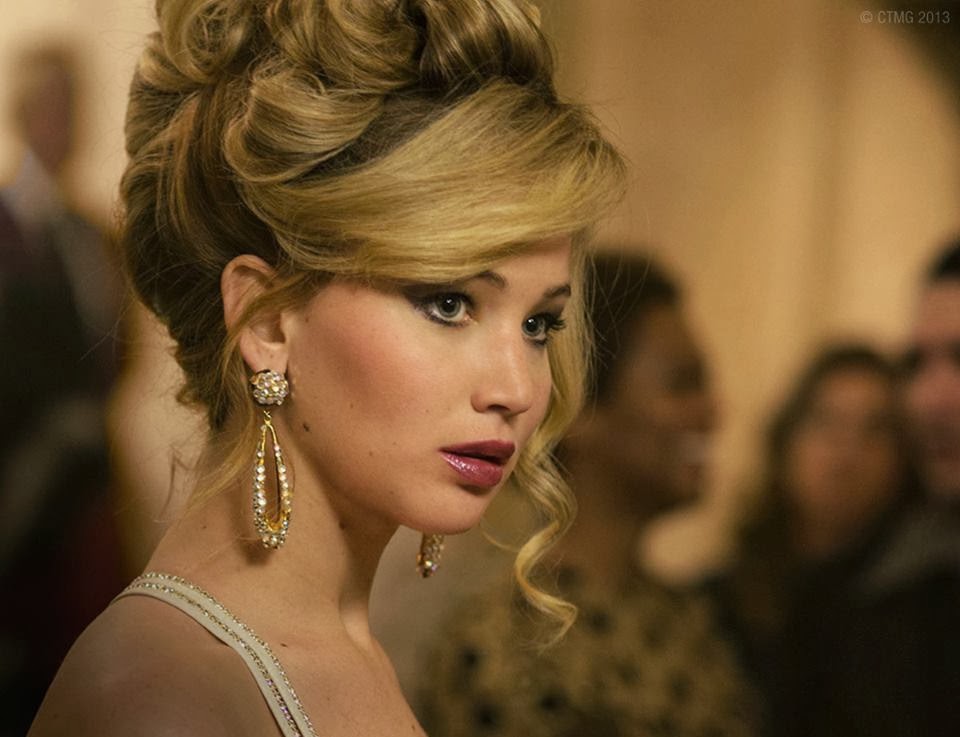 On this “boys club” side of things, Bradley Cooper does a good job of playing a character that goes from smooth and stylish to a person throwing hissy fits.  He does all of this, while also having his hair curled and getting into hilarious banter with his boss, played by Louis C.K. (an automatic win for the film).  Jeremy Renner is solid too.  He will go overlooked compared to the others, but his work as a good-hearted mayor who gets in over his head (and the pompadour on top) works for the film in the way it plays up his relationship with Irving.

In previous films, David O. Russell has really played up his stylish camera work and kinetic directorial/editing style.  That is something I found to be downplayed in Silver Linings Playbook, but it is back in full force here.  I would imagine that has to do with this film being his longest yet and perhaps largest in scope, in terms of the ensemble cast, the setting, and ever-evolving plotting of the film.  Because of these choices, the film feels very indebted to the work of Martin Scorsese.  While I would say that the pacing and loose-plotting are the biggest issues I have with American Hustle, the way this film comes together, utilizes multiple narration tracks, and tries to find balance between all its different aspects certainly has a lot to owe to films like Goodfellas or Casino. 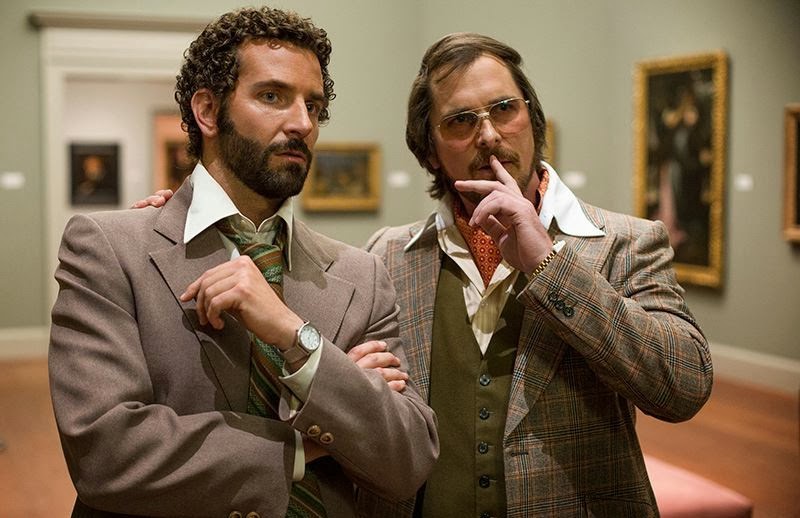 It is also just a lot of fun to see filmmaking decisions based on the time period.  A lot of requisite things make their way into American Hustle, hair styles most notable, but also costumes, locations, the soundtrack, etc. and the film is a lot of fun because of it.  Aside from the true story aspect (and even the film only states that “some of this stuff is actually true”), this story could be told at any time, with certain elements changed around.  Russell clearly wants to put his version of this story on screen, set at this time, as there is not much else to it, beyond the character drama that unfolds in this entertaining and often hilarious film.

Being entertaining seems to be a key part of David O. Russell’s film as of late.  Various themes are certainly present, but I am not sure how much more is there to be said in The Fighter, Silver Linings Playbook, and now American Hustle.  They sure are enjoyable films to watch, with many crowd-pleasing elements.  I am not calling any of these films empty, but it comes down to what I have taken away from them.  With American Hustle, there are some really strong performances here and a well-made film to sit down and watch, but I am plenty satisfied with seeing a film with a strong desire to mainly entertain and succeed at doing so.  Christian Bale and Bradley Cooper arguing, while looking the way they do, is a bonus.

Rosalyn:  Life is ridiculous.  And you know that I would never say anything bad in front of you about your father, but your father is a sick sonuvabitch. 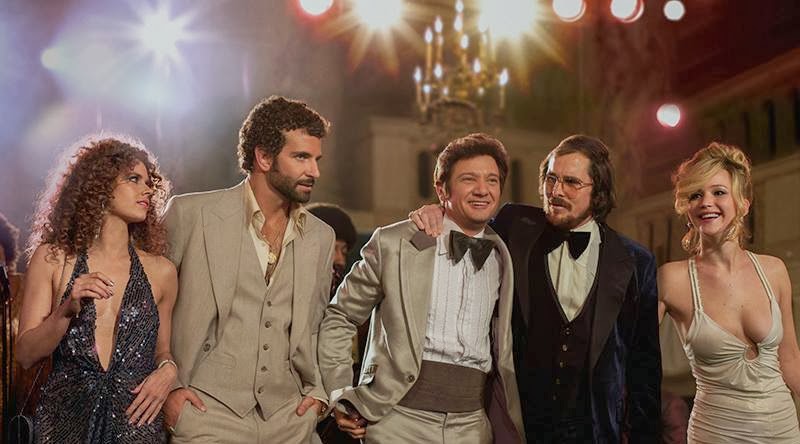 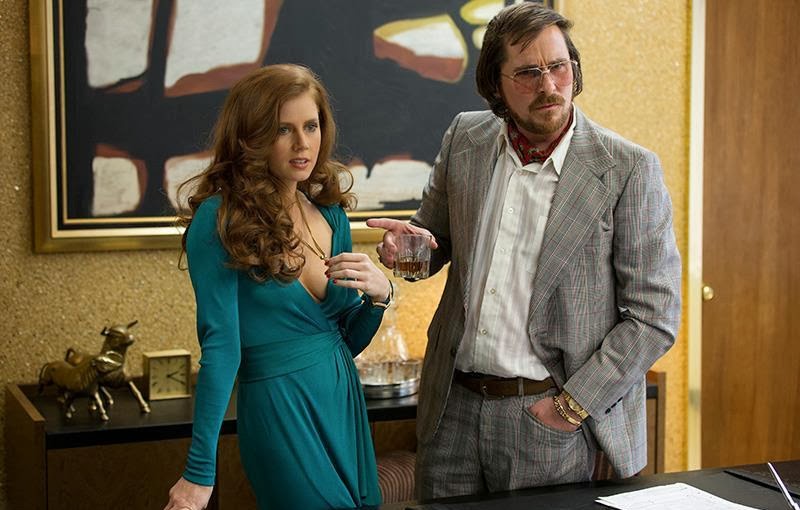 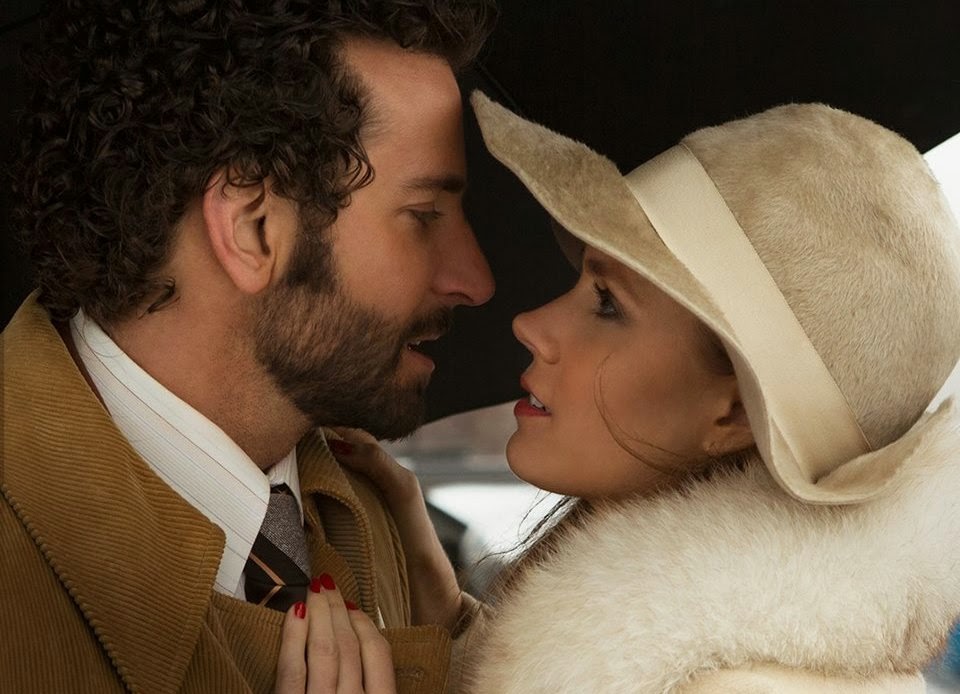 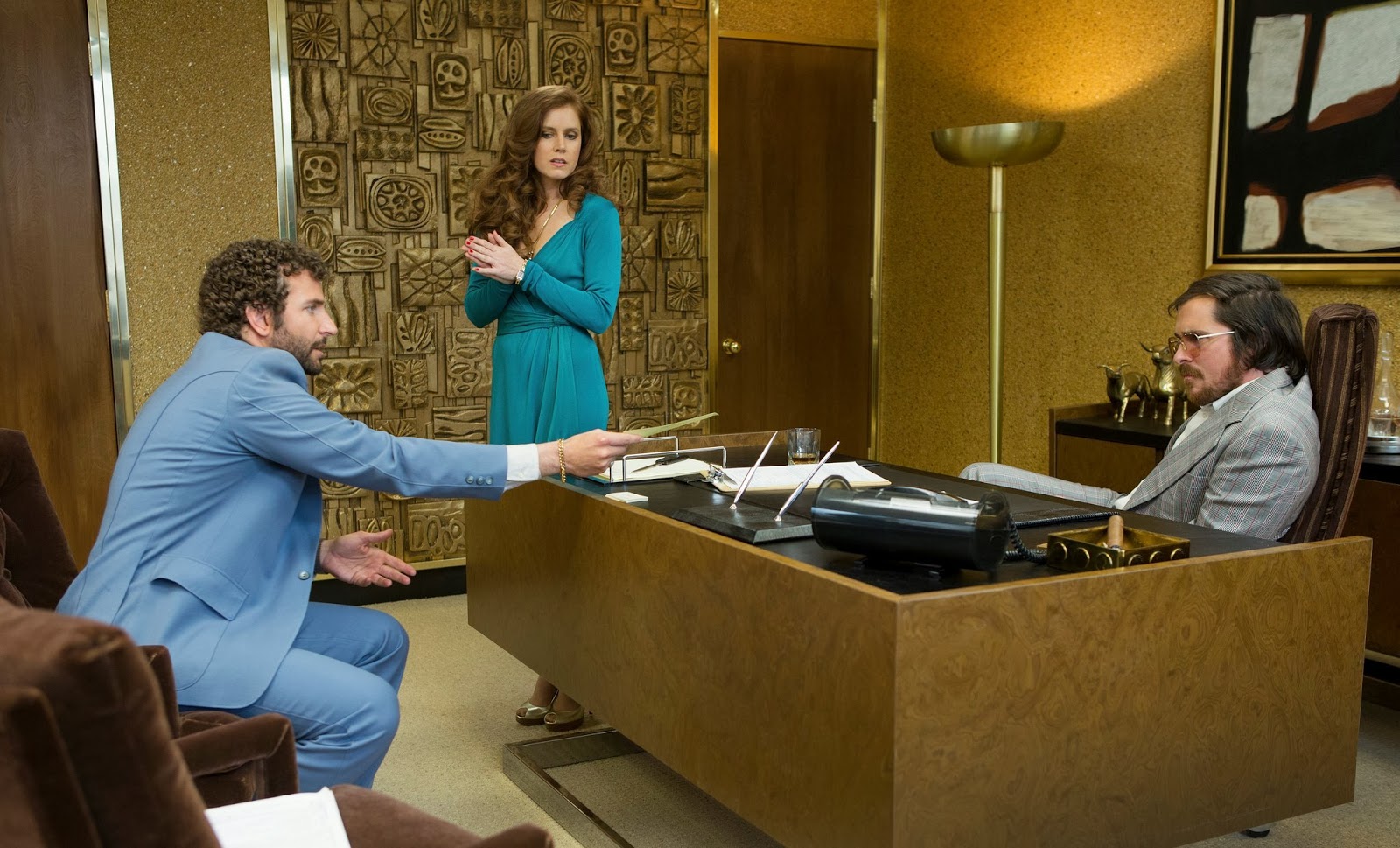