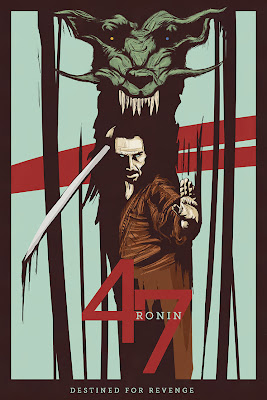 Kai:  The world will know who we are and what we did.

47 Ronin is an enjoyable hybrid period action/fantasy movie that was much better than I was expecting.  Granted I am generally pretty satisfied with Keanu Reeves action movies, but a lot of the surprise came from how different this very expensive movie played out.  Along with putting the money on screen, this is a film that is very much inspired by samurai films and strives to play like one, in terms of its pacing and devotion to portraying the notion of honor.  With that, the film also blends into other genres as well, most notably a swashbuckling adventure, with some fantasy elements thrown in for good measure.  All of this made for a fun film that felt unlike a lot of expensive action films like it, especially given that its main star is really a supporting character.  It is just too bad it will likely make next to nothing in theaters. 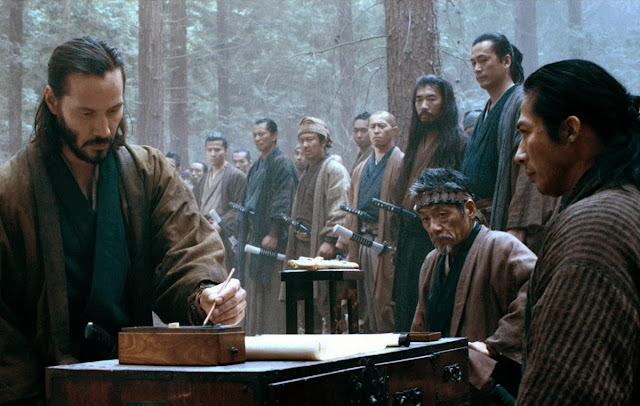 Following what amounts to a lengthy prologue, Keanu Reeves stars as Kai, a half-blood among the people in a Feudal Japan society, who joins a group of ronin (ex-samurai), led by Kuranosuke Oishi (Hiroyuki Sanada), who seeks vengeance on Lord Kira (Tadanobu Asano), a ruthless man who killed their master and banished the group.  Kai has a past shrouded in mystery, but he has certain qualities that allow him to spot a witch (Rinko Kikuchi), among other talents that make him a valuable ally.  The ronin will need all the help they can get, as a powerful set of foes will stand between them and the vengeance they seek.

I have mentioned Kai a few times here, but 47 Ronin deserves a lot of credit for going against the idea of making Reeves the “white man who saves everyone.”  While Kai is certainly a skilled warrior and is played by the biggest star in the cast, he really is a supporting character in this film, which gets just as much mileage out of Sanada’s character, as his journey becomes the more interesting one.  The film is called 47 Ronin, but I was obviously not expecting to learn much about all of these characters, so with that in mind, I was happy with what we did get – a reasonable understanding of why these men need to accomplish their task and what the stakes involved are. 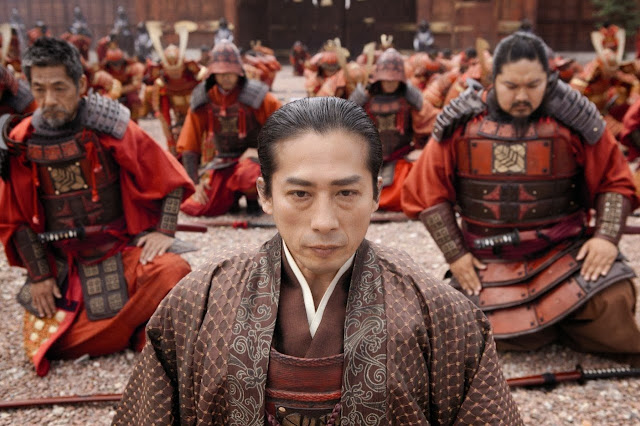 This is another thing I found interesting, as the setup for what these 47 ronin are after comes in the form of an extended first act, which really takes its time to develop the setting, the main players involved, what the rules of this world are, and what everyone is after.  It has some action scenes to keep things moving and there is emphasis on Reeves’ for the sake of keeping the American audience on board, I guess, but it really does feel like a film with a heavy Asian influence that was retained for the most part, as a far as a Hollywood-produced big-budget movie goes.  That last part is actually most evident in where this film eventually goes, as it reaches its conclusion, which is far away from what one would expect for a big-budget action film being released at Christmas and I can only imagine the discussions involved in keeping the ending as it is.

It helps that the film feels very confidently made.  Despite numerous delays, which played into my low expectations, director Carl Erik Rinsch and the crew involved (hurray for editor Stuart Baird!) have assembled a pretty top quality action/adventure film.  The visuals are splendid, delivering on creating a vibrant world set in feudal Japan, with a touch of the supernatural and fantastical to go with it.  The action is clear and exciting, with a sense of scale that feels appropriate.  Additionally, while the opening third of the film has a deliberate sense of pacing, once the plot is set in motion, the film moves pretty swiftly.  I am curious what sort of “director’s cut” may be out there, given that this is a PG-13 samurai movie, with plenty of bloodless sword fights, and a particular tattooed gentlemen, whose role seems to have been vastly cut down (he’s on the poster), let alone the potential to see more brutality involving Kikuchi’s effectively chilling witch character.  Regardless, I was very satisfied with what I did get to see, even if the visual effects become a bit wacky at times.

One could wish that the film was less low-key and less self-serious in telling its story.  47 Ronin is a lot of things, but it is a B-movie at its core, and while it is indebted to samurai films and westerns (which were inspired by samurai films), it could do with being less meditative at times, given that this is such a costly film with plenty of visuals that could easily be put with more action.  Sometimes you just want to see more swash in a film’s buckle.  I can only imagine how impatient some may get, if they are expecting a non-stop action extravaganza, but then again, patience does pay off, as the film at least tries to earn its bigger battle sequences and add weight to the small skirmishes that occur earlier on.

There are other satisfying elements of this film.  Much like The Wolverine this past year, I very much enjoyed how this film was populated by mostly Japanese and other Asian actors.  Again, Reeves is certainly in the foreground for a lot of this film, but he is not overshadowing the flavor that comes with having a cast like this.  Instead, Reeves feels like he is happy to be able to embrace the culture that this film is trying to depict on screen in the most elaborate and out there ways possible.

It should be noted that this story of the 47 Ronin does stem from a true account of the samurai code being pushed to a particular point.  The premise has actually been made into features several times before, though this is the first time a Hollywood production has pursued it, let alone went for an angle that also involved a fantasy element.  While the story has certainly been changed and the idea of adding a white character to it could seem like a drastic idea, I would like to think the essence of the original story is still something that is coming through clear enough, but then again, I would like to think that people, in general, can see what this film is getting at and why it succeeds as well as it does.

Despite being released at a time where a film could feasibly luck into scoring some success, depending on where the audiences’ preferences lie, 47 Ronin still feels like a tricky proposition.  Despite having a well-developed story that relies on an obscure legend, it is a strange beast of an action film.  It has some weird fantasy elements, moves in and out of convention, and may not be as satisfying to general audiences, as it is to those who appreciate hybrid genre efforts.  Regardless, here is a film that was very low on my radar and managed to really excite me for all of its creativity and approach to the material.  I was happy to see Keanu Reeves back in a big action adventure again and it always helps to enjoy the final product. 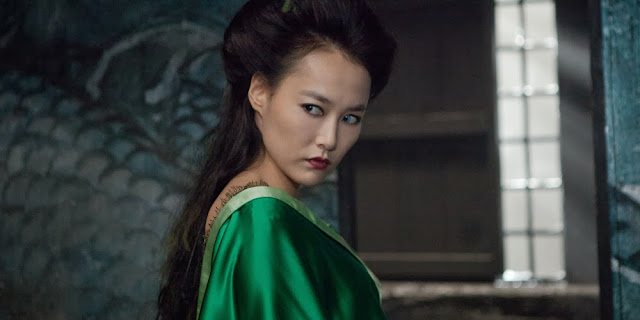