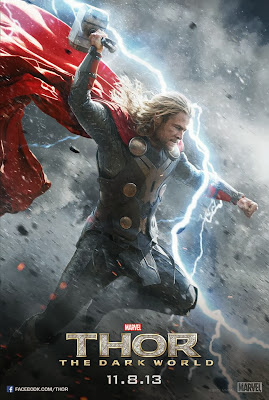 Sif: I had things under control!
Thor: Is that why everything's on fire?


Thor: The Dark World seems like a clear statement by Marvel Studios, insisting that they are simply here to entertain.  While there are more complex comic properties that have adapted into films featuring more than just adventurous heroics for the leads, spending two hours with Thor and the gang was an unlabored blast.  It has its share of issues involving story presentation and the effectiveness of the villain, but I had such a good time watching this film and the main actors in it that I hardly felt troubled by the messiness of a film that tries really hard to keep moving and be entertaining.  Regardless of all the strings that come with these various Marvel superhero films, I was very happy dive back into the world of Thor and witness Mjolnir in action. 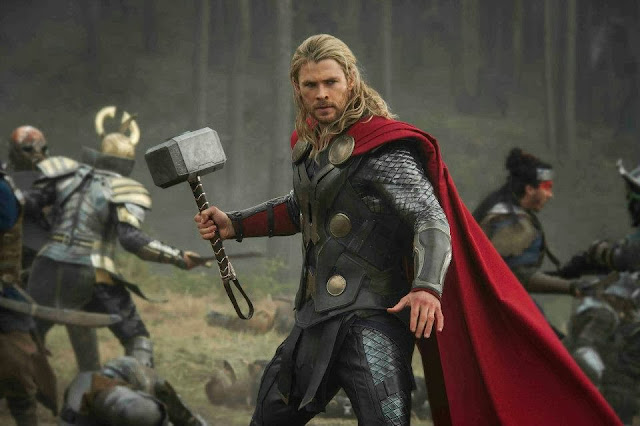 After a brief prologue that introduces us to this issue’s film’s main threat, we find ourselves a couple years after the events of the first film.  Thor (Chris Hemsworth) has been busy fighting battles in other realms with his fellow warriors, while astrophysicist Jane Foster (Natalie Portman) has been living in London, tracking various events that could lead her back to him.  The situation in Asgard grows dire when an old enemy, Malekith (Christopher Eccelston), ruler of the Dark Elves, manages to make his presence known, with a desire to darken all the realms.  He will do so by using a powerful force during the rare alignment of the Nine Realms, which Jane happens to find herself the host of.  In order to stop Malekith and protect Jane, Thor must team up with his evil brother Loki (Tom Hiddelston), who may or may not use any opportunity to gain the upper hand against Thor.

There is a lot of fun to be had with this film.  It is now clear to me that a story involving Thor may not be one for the ages, as even providing the building blocks to get to the main drive of the story seemed way more complicated than it should, given its simplicity, but that still leaves me impressed with how much fun I managed to have throughout the film.  The first film suffered from this as well, as that film had almost no real story to tell beyond, “guy is tough, he gets sent to earth, he learns some things, becomes powerful again, and saves the day,” yet it somehow filled two hours of time.  It strengths came from the characters, the surprisingly strong Shakespearean drama involving Thor, Loki, and Odin (Anthony Hopkins, who returns for ‘The Dark World’ as well), and the fun that comes with putting the God of Thunder in the middle of New Mexico. 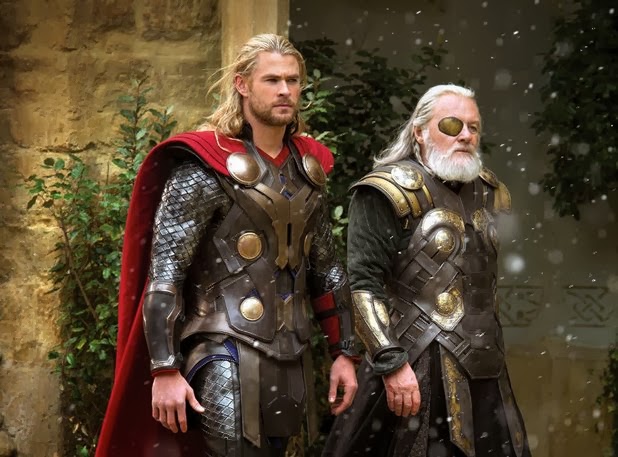 The change this time around, which ended up elevating this film above the previous entry, was how much more full of life Thor: The Dark World seems to be.  Thor felt like a very small film.  Most of the story was set on either one street in some small New Mexico town or in Asgard, which seemed to be the realm in which only nine people lived in.  ‘The Dark World’ takes great strides in filling out the world, which comes from a greater budget, sure, but also comes from having a better idea as to how this kind of film should really look.  Asgard now has a population and the other realms have distinct characteristics.  Battle scenes have plenty of moving parts.  Director Alan Taylor (of Game of Thrones fame), does a fine job of world-building.  There is a fantastical adventure story here (which puts Taylor right at home), but it also has the slick feel of a comic book come to life.  That also leads to rushed story and character beats, but the film has an overall appropriate style.

Speaking of this film being a fantastical adventure story, a key line from the first film had Thor claiming to be from a place where science and magic were one in the same.  That notion really seems to have taken hold of the attitude in this film, as Thor is now even more open to really blending the science fiction and fantasy aspects together.  One action scene feels like it combines battle concepts from Lord of the Rings with the space battles seen in Star Wars.  Other scenes involve key lines of dialogue where Natalie Portman’s science brain counters the explanations provided by Asgardians.  Given that the majority of these Marvel Studios films have attempted to ground there superheroes in some kind of reality, it really is a lot of fun to see one of their Avengers have their own series that is willing to really dive into the beyond. 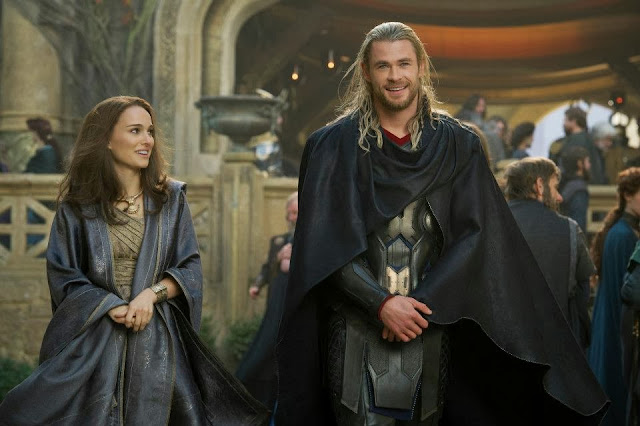 I think it works because of the actors involved.  Thor is not necessarily an inherently interesting character, but Chris Hemsworth is not only “hunky,” he is also pretty adept in making the character really sell both the family dynamic in this film, as well as the “out of place on earth” stuff that returns in this film.  Hemsworth also shares genuine chemistry with Natalie Portman, who is also pretty adept at making her role work.  She may be an example of “pretty girl with glasses = scientist,” but having an Oscar-winner in the role certainly doesn’t hurt.  The same can be said for Anthony Hopkins, who provides plenty of gravitas as Odin, let alone gets the chance to handle Odin’s Raven!  As far as the other actors are concerned, Kat Dennings is a lot of fun as Darcy, Jane’s intern, who provides lots of comic relief.  The various other Asgardians all have their moments as well, with Idris Elba continuing to do just about nothing, but still be pretty cool anyway.  Even Rene Russo gets in on some of the action this time around.

As Loki, Tom Hiddleston has really found a wonderful way to tap into what makes this character work as a villain.  It is no surprise that more scenes were shot and added, featuring his character, as HIddleston gets better in each film featuring this trickster god.  Loki is just as complex as ever and has a real knack for making an over-the-top presence feel like a huge helping of life being blasted into a film that is already a lot of fun to watch.  Regardless of whether or not future Thor or Avengers stories need Loki, I am really happy that this villainous character has remained delightful to watch and that Hiddleston has grown in popularity because of it. 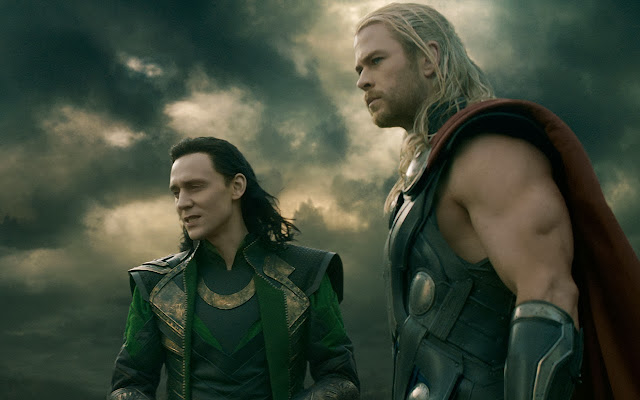 Unfortunately, a key setback is the lack of a really strong villain.  Christopher Eccelston can be a wonderful actor, but this film really does not allow him to do much that is memorable.  He is not all that imposing, given that Adewale Akinnuoye-Agbaje portrays his much more threatening right hand heavy, Kurse, and Malekith does not have much of a personality.  Even his goals are pretty hackneyed, since they only involve taking over the nine realms and making things sadder for everyone else, just because he wants to.  Given that hours of makeup are always involved for characters like Malekith to come to life on screen, I can only hope Eccelston was satisfied by the work he did.

Getting back to the fun though, Thor: The Dark World has a great balance of humor and adventure.  While the story is messy towards the beginning and the villain is pretty interchangeable, the movie does a lot right when it comes to pleasing an audience.  Hemsworth continues to make for a solid lead, actors like Portman, Hopkins, and others add the right amount of spark and chemistry that play to the film’s strengths, and Hiddleston provides the kind of wildcard energy that services the film even more.  Add to that some really fun and creative action/adventure sequences and Thor: The Dark World is as effective as it needs to be for comic fans and general audiences alike, who want a little thunder to go with their lightening. 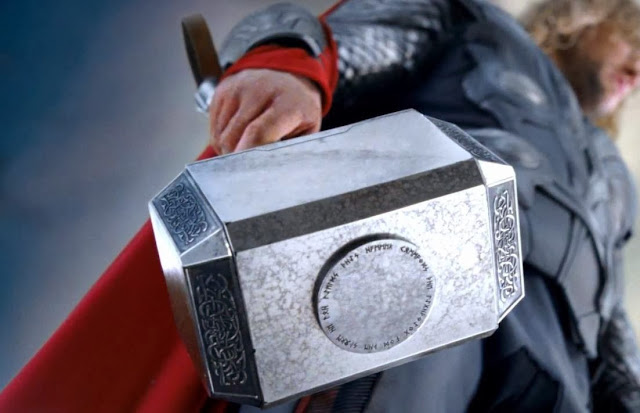 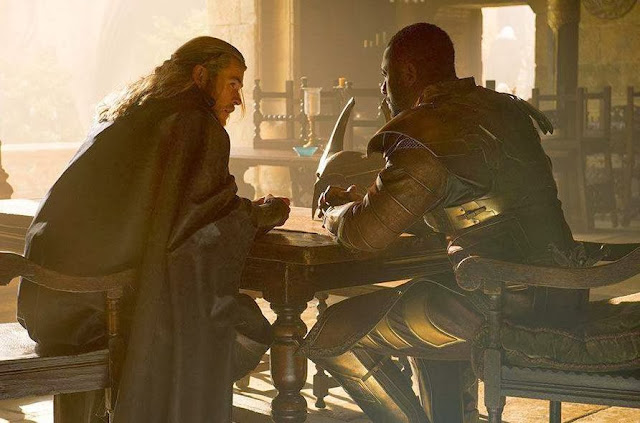 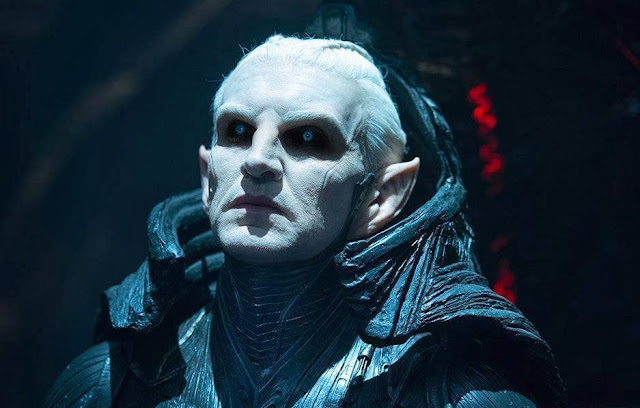 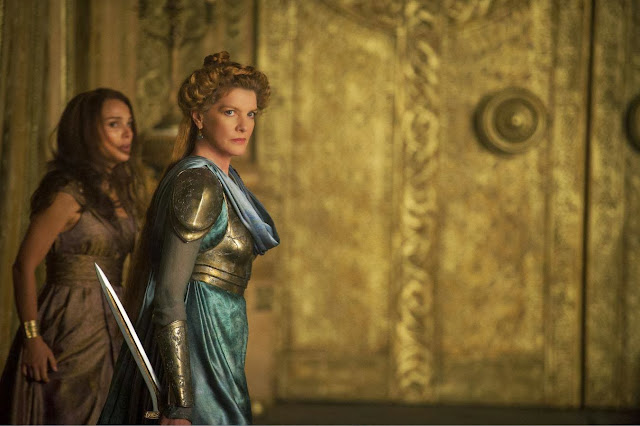