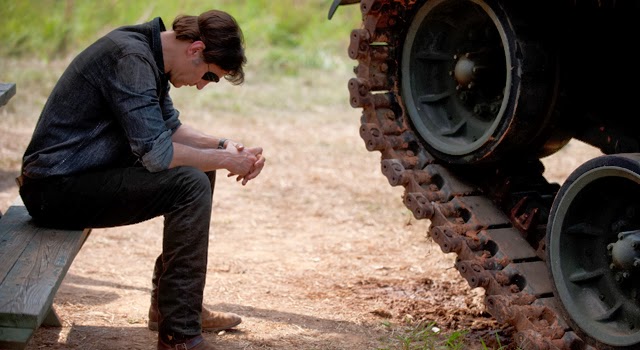 Hey everyone, since I am currently away in South Africa, I had my good friend and co-host of The IchaPod CraneCast, Brandon Peters, write up a guest write-up for the latest episode of The Walking Dead.  I assume it is a good read, but since I have obviously not seen the episode I have not actually read it yet.  So you can basically throw any complaints his way on his twitter feed @BTPeters or at his website - NaptownNerd.blogspot.com.  Anyway, enjoy this guest review and thanks again Brandon!

This week’s episode picked up with the second part of the ballad of Governor Brian following the fallout of Woodbury.  The episode would reunite the Governor with an old ally and lead us to the point at which we first saw him two weeks ago.

We open with “Brian” playing a game of chess with the little girl Meghan intercut with Martinez finding his group in a trench.  Meghan and the Governor discuss fathers while Martinez deems his group can’t leave him and his group behind because he “has a daughter”.  But, Martinez makes one thing clear, that he is the leader and makes the rules.  The Governor and his ladies can join them, so long as that is clear.  Somehow, you just know Martinez just offered up a shovel to dig his grave right here.  As we finish the open we are left with a really cool shot of the Governor and Meghan between an RV and a big ‘ol tank! 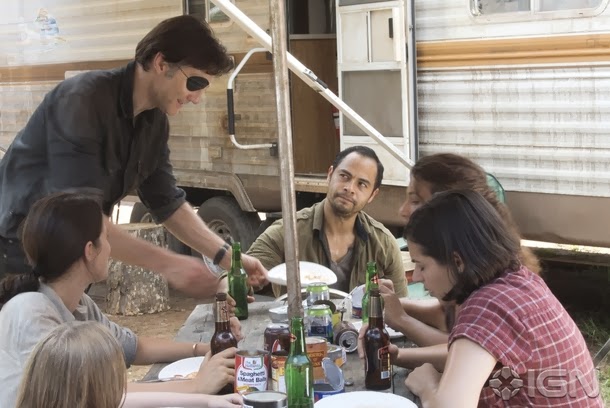 The Governor goes on a walkabout with his new group to check out a cabin in what was probably my favorite portion of the episode.  Leading up to the cabin they find a headless guy in an army uniform with a sign that says “liar” and another decapitated soldier whose sign says “rapist”.  Upon getting to the cabin there’s one but by he has a head, albeit one that’s been shot.  They group deduce that it was a self-inflicted wound.  His sign says “murderer”.  Once they get into the house, the sequence of them wandering with flashlights is done very well.  The group is aware a zombie lurks in the house, but its still a surprise when one pops out.  There’s also a cool shot of those decapitated heads still fully functional.  And-surprise!, there’s one more zombie.  The Governor takes down both of them, which is something that sort of proves himself to this new cast of characters he’s recently joined.

The group stays in the cabin at night and over a fireside chat, Martinez tells the Governor that “if it weren’t for the people you were with, I wouldn’t have brought you to the camp”.  This appears to be the last piece of the bridge he burned falling down.  But, Martinez takes note that the Governor seems like he’s changed.  Later with the group of guys, Martinez tries to brag about past times with the Governor at Woodbury, but the Governor is quick to silence him as he wants nothing of his past revealed.  We also learn the two brothers in the group, Mitch and Pete, are both of a military background.  The next day at a lunch at camp, the Governor’s main squeeze Lilly makes the comment “first time I’ve felt safe since all this started”.  This immediately, but silently, sets off the Governor.  With the greatness of David Morrissey we are able to just read and sense everything going through his head in that moment. 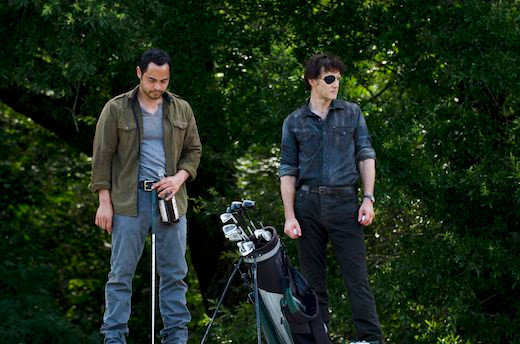 Martinez gets pretty drunk that day and takes to driving some golf balls atop his RV.  We are then filled in on the fate of the Governor’s other surviving goon “Shumpert” at this point.  He apparently went a bit crazy himself eventually got eaten by zombies.  The Governor takes this time to practice his swing and lands it on Martinez head.  He kicks him off the RV and then drags him to the camp’s zombie pit.  Slowly he feeds Martinez in to all the zombies.  It’s a pretty brutal and very Governor was to go.

The next morning there’s a hilarious explanation for Martinez’ death that I couldn’t help but get a chuckle out of.  Pete decides he’s going to take the mantle of leadership until there’s a vote, which Tara vehemently disagrees with.  An important moment comes later when Mitch, Pete and “Brian” stumble upon another camp site.  Mitch wants to sneak in and steal their stuff, but Pete says to leave them be and to hunt and gather for their own supplies.  On their way back they pass the same site, except this time everyone has been murdered and their camp looted.  There’s an old man still breathing but Mitch puts a knife to his head, ending any chance he still had.   For some reason after this, the Governor decides it’s time to pack up and go.  He and the women sneak out in the middle of the night and drive away.  Their progress is stopped when they run into a hole filled with mud and zombies stuck in that mud.  It’s one of two really awesome images in the episode. 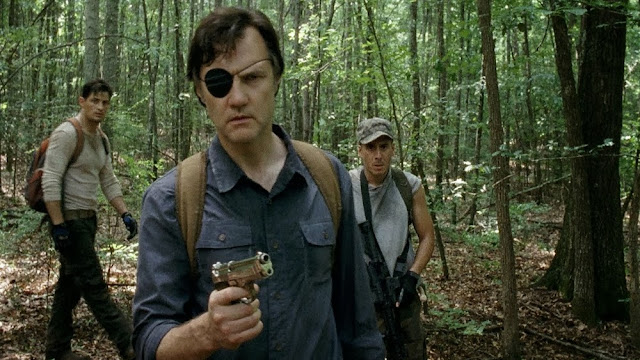 When the sun rises, we see that the Governor and his ladies have returned to the camp.  As he puts his gun holster on, Lilly asks what he’s doing and he says that he’s surviving.  He first visits the RV of Pete and stabs him, followed by choking him.  When he arrives at Mitch’s RV we’re expecting the same, but know better.  Mitch had displayed a strong sense of survival, enticing the Governor to ask him to be his right hand man.  Mitch and the Governor then go to a nearby lake and throw Pete’s body off the dock.

When we return from the last commercial, we have “Brian” now fully in charge of the group suggesting they find a safer place.  A zombie attacks Meghan and the point is reiterated.  We also return to the dock where the Governor stares at his new fish tank.  He looks over Pete’s zombified body struggling underwater.  While in the woods, the Governor stumbles upon Michonne and Herschel and we know it’s not going to get pretty.  Now we’re caught up on “Brian’s Song”. 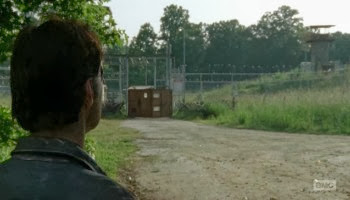 This episode wasn’t really bad so-to-speak, and I enjoyed watching the Governor infiltrate and stealthfully take over another group of people.  The man gets his family “back” and rises once more.  But, I can’t help but think that last week and this week’s episode couldn’t have been condensed into one.  I enjoy the one off stories and the like, but I couldn’t help but start to miss the prison gang about 20 minutes into this episode.  And The Walking Dead seemed to be trying to get us on the Governor’s side or whatnot to “shock” us and pull the rug out from under us to see he’s still very much the same guy.  I’m not sure anyone was going to buy that for a minute.  There was no real redemption for this person, especially as a TV character.  So in essence, this was two episodes drawing out the inevitable and something we all expected to happen.  I think this one was better than last week’s, because it was well directed and moved a bit better, but overall we just could have sufficed with one of them.