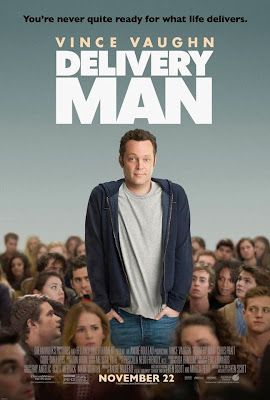 David:  These kids need someone to look out for them.  They need a guardian angel.

There is a certain kind of logic I am intrigued by when a studio decides that a big family dramedy that is to be released on Thanksgiving should be based around a sperm donation gone disastrously wrong.  That’s what happened and Delivery Man is unfortunately not better than the premise suggests it could be.  It is not for lack of trying, as I generally like Vince Vaughn in almost anything and feel the film actually makes its dramatic beats work fairly well, but given that the film is ostensibly a comedy, Delivery Man fails to…deliver more than a few laughs to go along with the hearts of the 500+ children that Vaughn becomes responsible for. 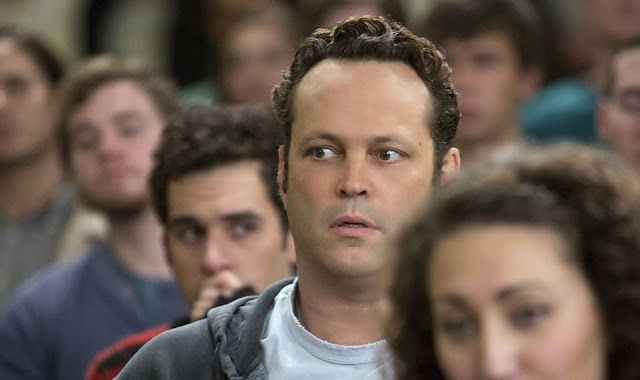 Vaughn stars as David Wozniak, a slacking meat delivery man, with a lot of debt, a family that rightfully gives him grief, and a girlfriend (Cobie Smulders) who does not enjoy how David is going nowhere with his life.  All of that changes when an attorney shows up to inform David that based on several sperm donations from years, David has unknowingly fathered 533 children, with 142 of them filing a lawsuit to learn his identity.  Despite advice from David’s best friend/lawyer, Brett (Chris Pratt), David decides that perhaps embracing this knowledge and secretly seeking out each of his children could be a good change for his life.

I may start to just list the number of issues with this film, but I will say it has its heart in the right place, but just does not seem to know what makes a high concept work with real world logic.  There is suspending disbelief and then there is simply disregarding everything in favor of wacky antics.  For starters, there is no real reason for David to begin to do what he does with his kids.  The only reason it happens is because he is handed a giant packet of information for each one of the children involved in the lawsuit.  This would be less bothersome if his best friend was not the one who handed him this packet, while saying the words, “whatever you do, do not open this!”  This is the sort of complaint that challenges the existence of the movie though, so I could perhaps lay off of this notion, but what about other issues with the film? 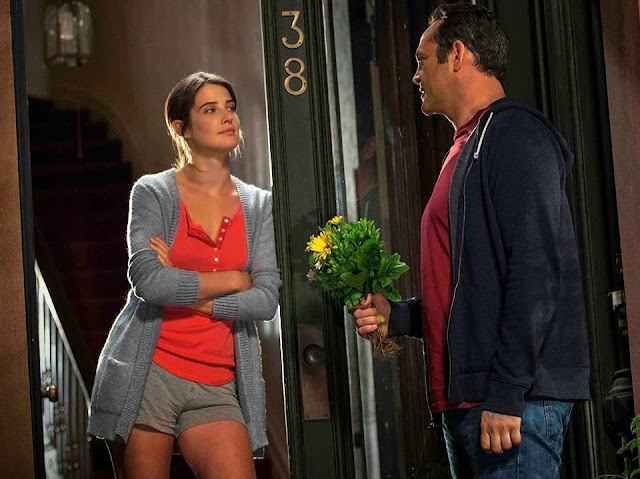 For starters, this film beings really poorly.  Given that the film is striving to be a comedy in its opening act, Deliver Man goes for long stretches without laughs.  As much as I like Vaughn as the kind of comedic actor who derives comedy from making his dialogue sounds like a sales pitch that eventually works you over, putting him into the role of “Vince Vaughn and people around him” can only go so far if everything around him is fairly uninteresting.  What we learn is that he’s the middle brother in a family of butchers, with money problems, yet these money problems only become important when the film decides that it needs to be.

This brings me to the biggest gripe I ended up having:  Why do we need a violent mob subplot?  Yes, the film partially involves David’s struggles to pay off a debt to the mob or else he will be hurt or his family will be hurt.  Strange stakes for the Thanksgiving-Vince-Vaughn-sperm-donor comedy, but the film pushes this forward quite a bit.  It goes along with the other strange decisions made during the course of this film, but that does not mean there is nothing to even it out. 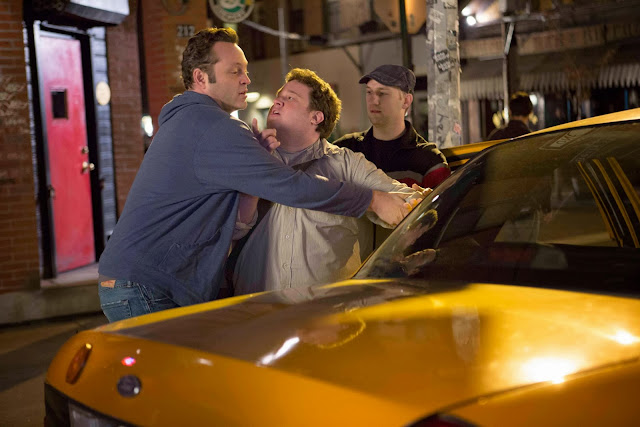 Thankfully, the core of this film actually is quite sweet.  While it eventually relies on montages to show the different children of David and leans heavy on a subplot involving one of the kids threatening to tell on him, if David doesn’t let him live at his home for a time, there are individual moments with the kids that work.  This is where the film worked best, in terms of aiding its central premise and presenting an aspect that a family could enjoy.  Some of these scenes are enjoyable, based on comedic aspects; others utilize drama effectively, even if they feel a little too sentimental at times.  Basically, there is a nice chunk of time that threw away a lot of the weird film logic problems I had and focused on being charming.

Speaking of charming, Chris Pratt is a big help to this film.  He plays David’s best friend who is a family man as well, with four kids of his own, constantly providing him with reasons to tell David what a bad idea it is to “play” at being a father.  The comedy from this may be too easy, but I had a lot of fun with Pratt, who shared good chemistry with Vaughn, and delivered a lot of funny one-liners throughout. 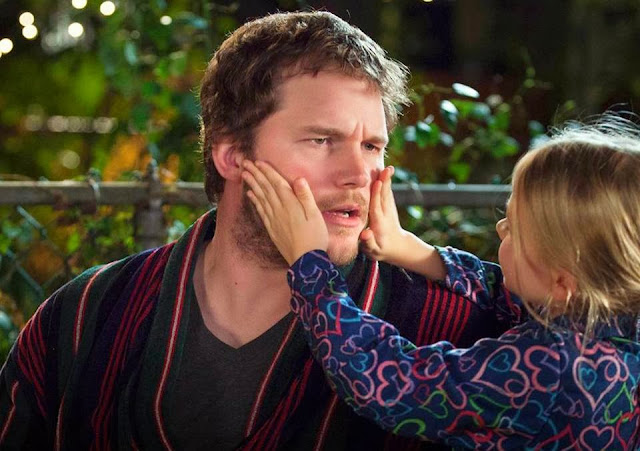 Unfortunately, while this concept had some potential and the winning combination of Chris Pratt and Vince Vaughn makes for some fun scenes, Delivery Man is not really the answer, as far as seeking out a fine family movie for the holiday goes.  It has some finer moments that focus on being sweet, but it is not enough to outweigh the film’s desire to not make a whole lot of sense.  It may be a movie, but there are many ways to be more creative in presenting a story such as this, let alone better choices to have made to make it funnier when it desperately needs to be.

David:  Yo no soy David Wozniak! 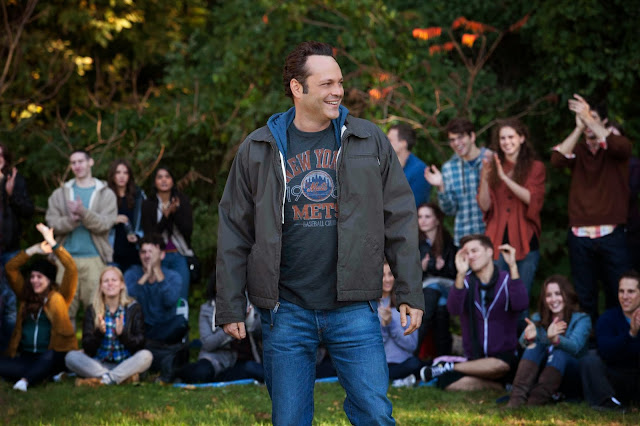 Aaron is a writer/reviewer for WhySoBlu.com.  Follow him on Twitter @AaronsPS3.
He also co-hosts a podcast, Out Now with Aaron and Abe, available via iTunes or at HHWLOD.com.
By Aaron Neuwirth
2013 Films Chris Pratt Cobie Smulders Comedy Drama Ken Scott Vince Vaughn
Reactions: