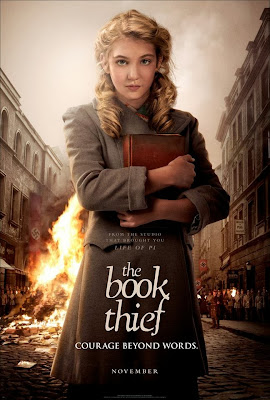 Narrator:  I make it a policy to avoid the living…well, except sometimes I can’t help myself…I get interested…Liesel Meminger caught me…and I cared.

It is strange that a film like The Book Thief will likely be facing an uphill battle in its efforts to be regarded as a praise-worthy film, beyond just the idea that sits as pure Oscar bait.  Granted, it is a WWII drama, set in Germany, based on a popular novel that deals with a young girl vs. the tenets of National Socialism, but that does not mean it should be dismissed.  Personally, I am not a fan of the term, “Oscar bait,” but it is hard to avoid it sometimes and a film like The Book Thief fits the criteria to a T.  With that said, ideally the term applies to movies that are generally good and that is why I am happy to defend my thoughts on the film, as The Book Thief was an affecting piece of filmmaking overall, with some splendid performances and a story that has a nontraditional backdrop to work with, despite being set during World War II.  I just wish the film found a way to play some key dramatic moments a bit differently. 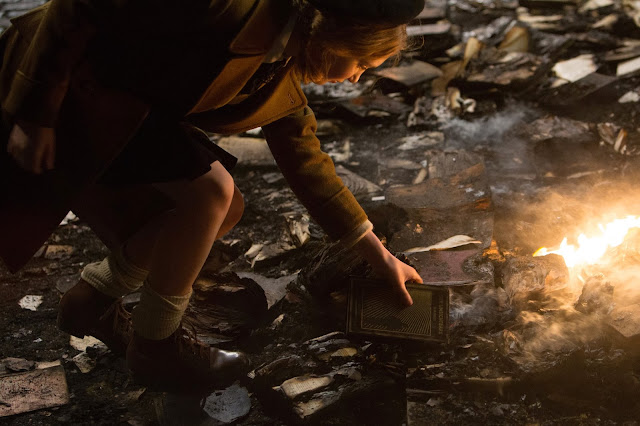 The film tells the story of a young girl named Liesel (Sophie Nelisse).  She is sent to live with a foster family in World War II Germany.  These foster parents are the kind Hans Hubermann (Geoffrey Rush) and his crabby wife Rosa (Emily Watson).  Liesel struggles to fit in initially, especially at school, due to her inability to read.  Determined to change for the better, Liesel does eventually build up her ability to read, with help from Hans.  Life for Liesel and her foster parents becomes more difficult when a Jewish Refugee named Max (Ben Schnetzer) enters their lives, staying in their home, and hiding from the Nazis in the process.  As life continues for Liesel, she continues to find refuge in her growing appreciation for both her new family and her love of books, which becomes a way for her to escape a society that is governed by rules she does not understand.

I can say right now that I have not read the book and only know so much about it.  It is apparently a very long novel that is not told in the same linear manner that this film proceeds in, but that matters very little.  What is important is whether or not the film was effective in what it was trying to accomplish and I believe it was.  There are some elements in the story that feel a bit too over-the-top in how they are handled and the way the portrayal of certain scenes has a feel of too much Hollywood-style involvement, despite the international cast and production, but I was taken in by the story, which was all the more effective, based on the actors involved. 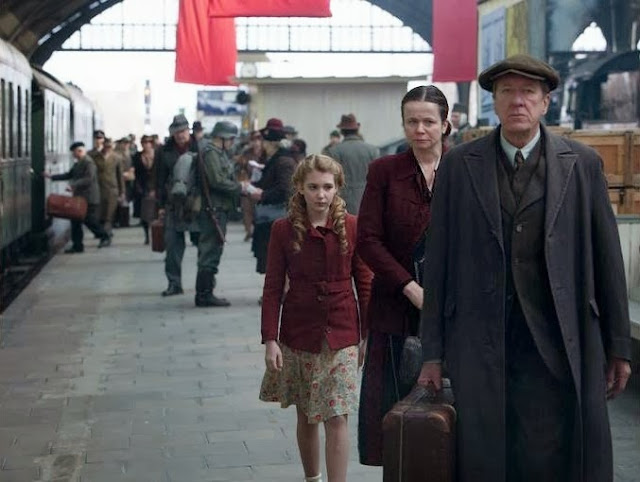 Sophie Nelisse is quite the find, as Liesel is an interesting young girl that does not appear too precious or precocious for what the role requires.  Instead, we get a real character that happens to be very curious and has a drive to learn and read all she can.  Her relationships with the other actors are well handled, which includes Rush, Watson, and Schnetzer, but also her young neighbor/schoolmate Rudy (Nico Liersch), which is inviting of a fun relationship between children on screen.

As for the adult actors, Geoffrey Rush and Emily Watson are unsurprisingly good in this film.  Rush easily taps into what is required of him to be the very warm and endearing father (or “Papa”) for Liesel and even if the film feels overly sentimental at times, given how the film utilizes the character, Rush is still very good here.  Watson actually has the more significant role in the scheme of things, as she obviously can’t be a prickly pear all of the time and the story eventually delves into how her character evolves, let alone showing us the other side to this persona.   The part has layers and Watson makes the best out of the character. 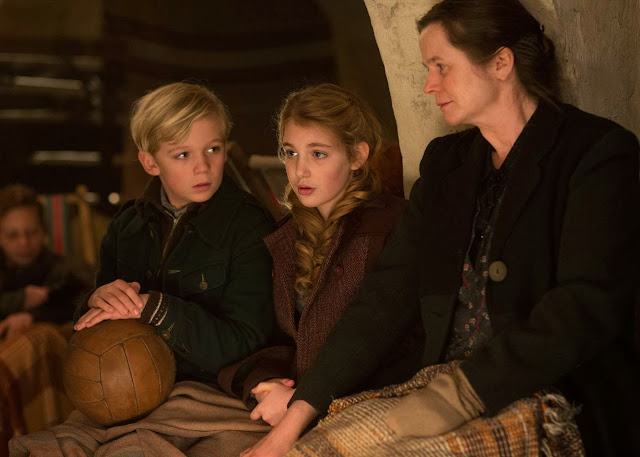 A very interesting aspect of this film is the way it presents this small village, in which the story is set.  While the film is showing us a Germany controlled by Nazis, it is not often you get to see a town that filled with people that are not automatically accepting of this regime.  It is one thing to say that some people were just following orders and delve into why that is an issue, but this is a film that shows the real struggles for a regular town to attempt to strive in the face of a ruling government body that they did not necessarily sign up to be a part of.  The film has a very clear focus, which relies on a young girl and a family that are all against the Nazis, but I still found it interesting to see something different in regards to how a Nazi-controlled territory was reacting to their state of being.

Where it becomes a challenge to really accept this film as a very strong piece of work is in the production surrounding the interesting story and well-acted characters.  A key thing to note is the film’s narrator, which is Death.  Voiced by Roger Allum, Death (as a character) provides narration during the film, but it only occurs in a minimal capacity, making me wonder whether or not there were others ways this film experimented with what I am sure worked much better in the book, only to attempt it at the capacity we see it.  The Book Thief also has a beautiful score by John Williams that seems like a step too far in some cases.  It is not that the score is bad, but the film feels fairly small in scope compared to what Williams has composed, which especially doesn’t help when the film has the need to really emphasize its drama with scenes that reek of cliché. 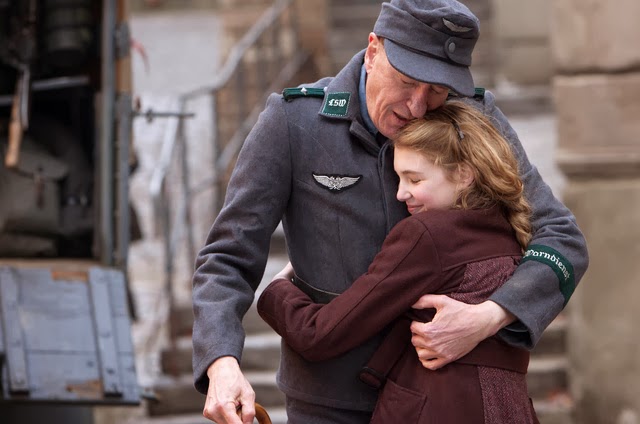 Putting these complaints aside, I did find myself engaged in the story, which allowed the film to have a proper effect on me overall.  I was caught up with the plights of these characters and felt pleased by the time the film ended, given that The Book Thief very much wants to go for some emotional beats and I was willing to go along with it.  Helping matters were the actors, who all provided strong work to support the story.  Yes, The Book Thief preys on a lot of elements seen in films that are award hopefuls at this time of year, but that did not stop me from enjoying it for what it was, regardless.

Max:  Words are life, Liesel.  All those pages, they're for you to fill. 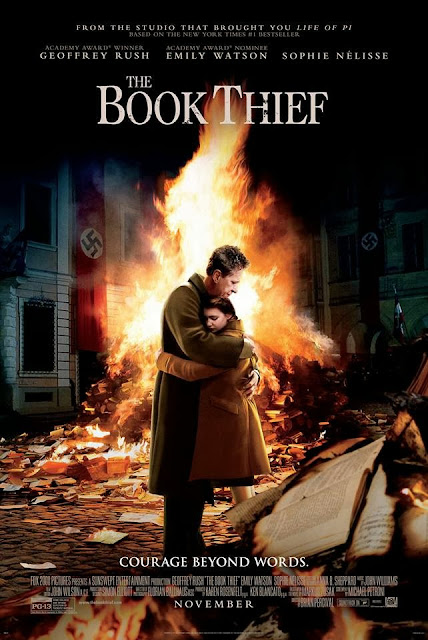 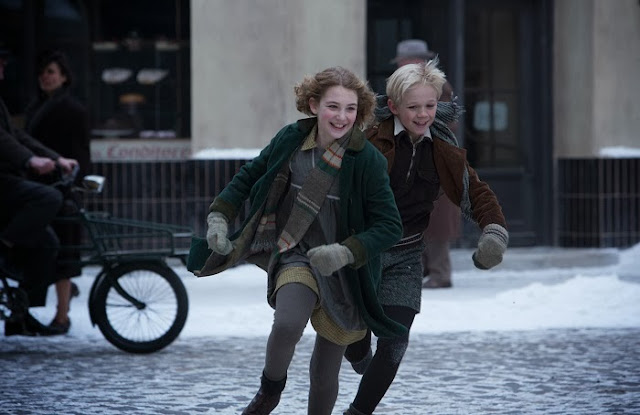 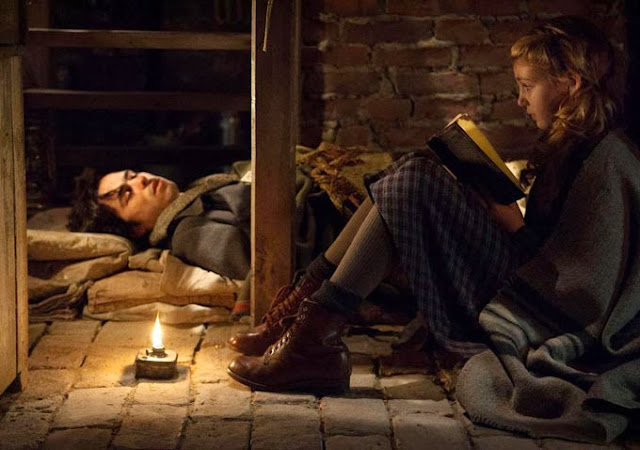