Africa Blog 1 - Time To Worry About Sharks And Baboons 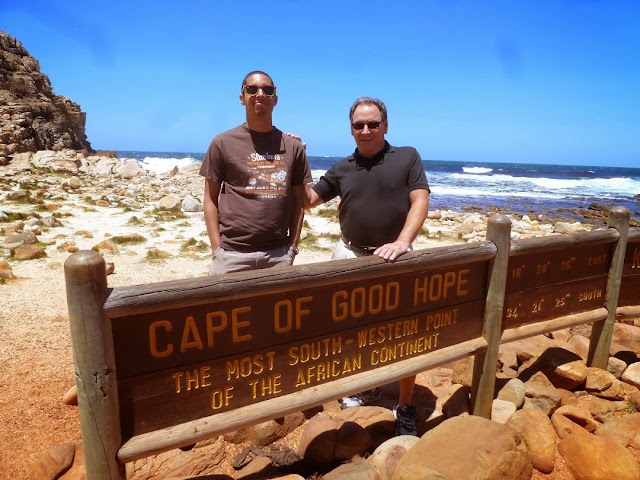 So this is obviously different than the normal posts I provide for those who either stumble on to this blog or cave in and read due to my incessant posting on Twitter, Facebook, etc.  There is not even any real way to tie film-related discussion into what I am about to describe.  All I am attempting to do here with what is hopefully a series of posts, is provide some rambling details about my experiences in South Africa, following long days full of activities.  Ideally anyone can enjoy what I have to say here, regardless of how tired I was, when writing this, but if that's not enough, I do have pictures of my journey accompanying these entries.  So with that totally self-involved preamble out of the way, let's get into South Africa and the dangers of sharks and baboons.

Ok, so immediate spoilers:  I did not actually encounter any sharks or baboons during my first couple days here.  If you were hoping to see pictures of me fending off baboons, while surfing big waves with sharks chasing after me, that is really not the story you will be reading here.  That said, the reason sharks and baboons are worth mentioning (aside from the fact that it a lot of fun to keep putting the two words together) is due to the fact that of all the things I learned in South Africa so far, it seems like everyone wants to emphasize how baboons are a very real nuisance and sharks are very much lurking in the ocean.  There are literally sign posts all over the the area surrounding the cape, indicating that baboons should be looked out for, as they will take your food and, y'know, attack if provoked in some way.  As far as sharks go, let's just say my time as a surfer is not going to be starting in South Africa, given the use of the words "great" "white" and "attack" on a regular basis, when describing ocean conditions. 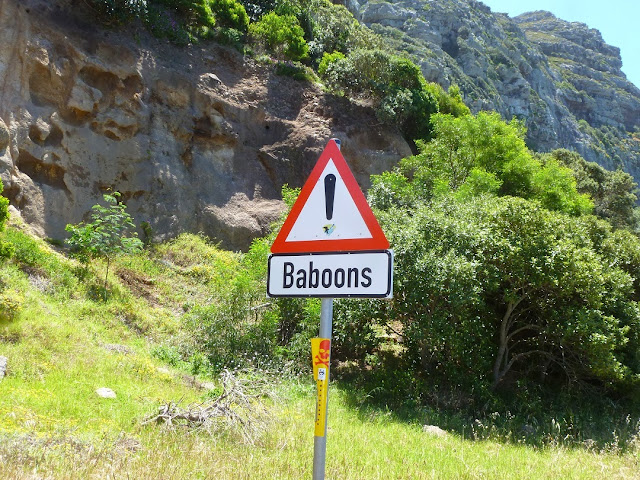 So what's been going on during my short time in South Africa so far?  Lots!  Let me start by saying that I am from Southern California, to make that clear for others who don't know me, and South Africa has weather that very closely resembles SoCal.  It is windier perhaps and the area of Cape Town I am staying in (the Waterfront) has a lot in common with San Francisco, but it is currently late November, which feels like the equivalent of early summer in Laguna Beach.  I have arrived after some heavy rain storms and will ideally be keeping warm, due to some nice sun coming my way.  Now that I've gotten the awkward, first date, "So uh, how about that weather..." portion out of the way, let's really dive in.

I am writing this after my first very big day in the country.  Thanks to our (my dad is with me, if I didn't make that clear) very friendly tour guide Ryan, a lot of ground was covered, as far as the peninsula is concerned, with plenty of insight from him concerning the culture, the various locations we drove through, the places we stopped at for pictures, and whatever else may have been deemed worthy to talk about.  This is a fine way of me saying look, I am doing my best right now as it is, tired as I may be, to provide some sort of info about what's going on here and I can't be remembering every detail of what I was told in a day.  It is not for lack of trying, but I do have cool things to emphasize. 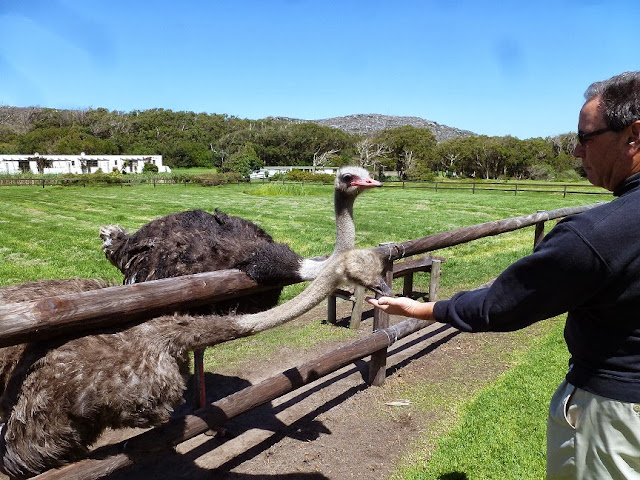 Let's get to those.  First up:  Ostrich farm!  Ok, that may sound anti-climactic, but we visited an ostrich farm and it was pretty neat.  The big highlight of this place is the store, which sells painted ostrich eggs and various products made out of ostrich leather, but you can also purchase feed and let the ostriches bite your hand of...er I mean peck at your feed -filled hands and eat.  Ok, so feeding an Ostrich does not come without a small amount of pain, but it was a neat experience, as was checking out the legs of an ostrich, which look incredibly similar to a velocoraptor.  Did I learn anything from this?  Yes, black ostriches are the males and their beaks and legs turn a reddish color when they are in heat.  We can skip over whether or not I saw anything concerning that last part take place.

It seems like I'm going long and I'm also starting to fade, so let's get to the highlight of the day:  checking out the Cape of Good Hope.  Let's back up a bit first.  Vasco De Gama is my favorite explorer.  Ok, so some people may have just checked out, after that sentence, because it is a weird one, but let me explain.  I studied De Gama in junior high and have since held him as one of the historical figures I more or less enjoy keeping memory of (note: I was a history major at UC Santa Barbara).  With that out of the way, the Cape of Good Hope matters, as De Gama was the first explorer actually round it and then head onward to India, which opened up the spice trade route via sea travel.  Getting to visit this location, which is also the most south western tip of Africa was quite awesome for me. 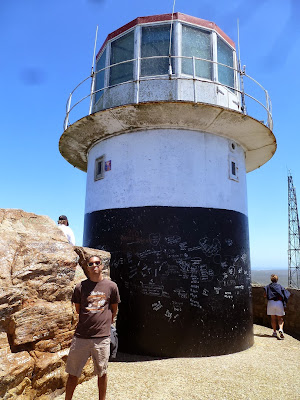 Additionally, we were able to visit Cape Point, which is highlighted by a large lighthouse at the edge of this portion of the peninsula, which one must hike up to in order to reach.  This was fun too, even as I had to work my way past...less than capable tourists hiking up the same steep pass.  At this point there's probably a picture posted to show this view, so let me get back to the Cape of Good Hope.  It is not that the view is not great, but there is something more to the feeling of the sea breeze from both the Indian and Atlantic Ocean hitting your face at the same time.  The wind is very strong, rocks are slippery, despite my choice to move along them, and I get a sense that the area had me unconcerned with anything else at the time.  Ok, the threat of sharks was still on my mind and there were still baboon warnings around (they can swim!), but besides that, I really enjoyed being in this spot.

There were some other activities, but I want to wrap this first post up.  South Africa is a huge country and I am only going to see Cape Town, before moving on to Zambia for safari adventures, but I am currently really enjoying it.  The climate is great for this time of year, the people I have encountered are all friendly (everyone speaking English is a bonus), and as of now, there are no baboon or shark-related incidents I need to describe.  Maybe I'll have more of a way to structure these, as I carry on, but I hope I have provided some insight on this trip I am currently on.  Oh, and I got to see the penguins of South Africa today, because that's apparently a thing...

Note:  So I completely forgot to wrap up this Vasco De Gama thing.  Basically, on the way to the Cape of Good Hope, you pass two large crosses on different sides of the peninsula.  One is for Bartolomeu Dias, the first explorer to actually go around the tip and the other is for De Gama, who would go on to India.  There is no punchline to all of this, but if I could reach the same point as an explorer I admire did, then I guess I am doing something right with my life.

Tune in next time for The Lion's Head, The Witch, and The Tabletop Mountain! 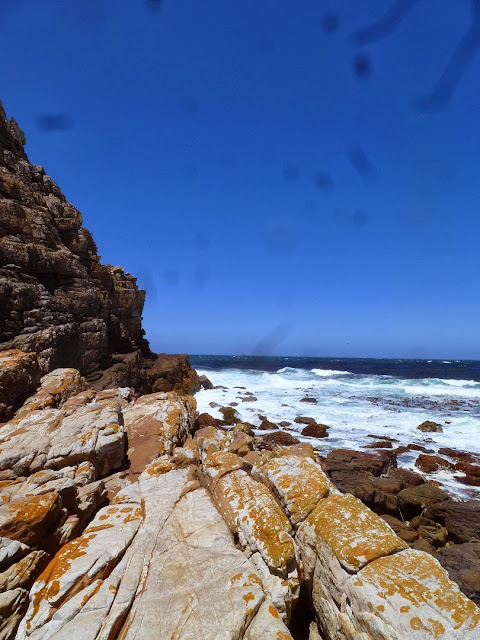 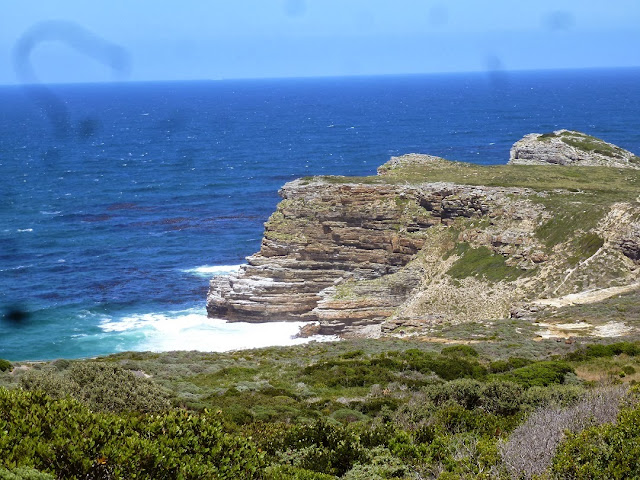 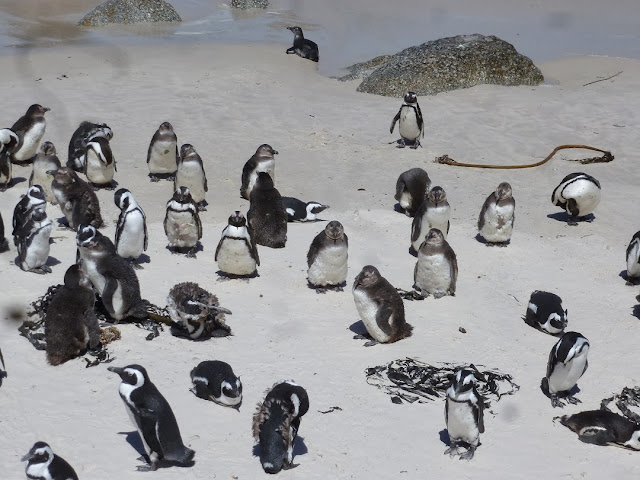 Aaron is a writer/reviewer for WhySoBlu.com.  Follow him on Twitter @AaronsPS3.
He also co-hosts a podcast, Out Now with Aaron and Abe, available via iTunes or at HHWLOD.com.
By Aaron Neuwirth
2013 Africa Baboons Cape of Good Hope Essay Journal Sharks South Africa Vacation Vasco De Gama
Reactions: