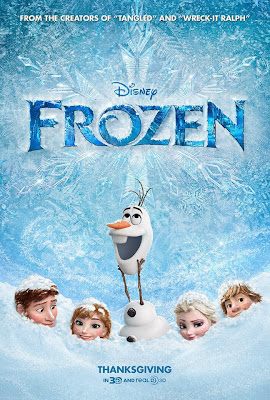 Anna:  I know how to stop this winter.

I will get this out of the way:  I really liked the fact that Frozen was an animated Disney film that did not rely on the death of a parent as a major plot point and that it did not end with a big wedding.  Not all Disney films have this, but Frozen stuck out to me as a Disney princess film that really tried for something a bit different, even as it utilized proven pieces of a formula.  It also helps that the film is a lot of fun, full of some really nice songs, exciting to watch, and wonderfully animated.  We may be past the days of traditional animated films from the Mouse House, but Frozen is definitely a solid entry for this generation of their work.


Based on “The Snow Queen” by Hans Christian Andersen, Frozen is the story of two princesses.  One is a regular girl who likes to have fun and the other also likes to have fun, but has the gift of freezing powers.  An accident forces the girls to be locked away until they grow older, in an effort to hide these powers.  On the day of Elsa’s coronation, where she will be crowned queen, her younger sister Anna takes the opportunity to explore the kingdom, where she meets a possible suitor.  Unfortunately the sisters get in an argument over this, which leads to Elsa accidentally freezing their kingdom of Arendelle and retreating to the mountains out of fear.  Anna takes on the mission of finding Elsa and teams up with a mountain man, Kristoff, along the way.

There are some noticeable cast members here, including Kristen Bell as Anna and Alan Tudyk as a duke from another land, but like many animated Disney musicals (which Frozen very much is), the idea was to cast performers who could not only provide a strong vocal performance, but really sing as well.  With that in mind, the songs in this movie are great.  “Let It Go” is a true highlight, in particular, but Frozen really takes to delivering on being a memorable musical, much like many of the late 80s/early 90s Disney animated features.

Along with the music, the film is a lot of fun.  Sure, it goes the route of having a wacky, animated snowman, Olaf (voiced by Josh Gad), but it is not so much distracting as it is a fun addition to a set of characters that are already enjoyable to watch.  The animation style is similar to something like Tangled (another Disney animated film that I enjoyed quite a bit), but Frozen manages to be both a lot of traditional Disney-like fun and striking in a visual sense.  Other Disney films have been that way as well, but this is very much a film that wanted to capitalize off of a wintery feel, and the film manages to accomplish that, without losing sight of its overall goal of entertaining.

Co-writers and co-directors Jennifer Lee and Chris Buck have really nailed the challenge of making a film like this come to life and also making it stand out in what it accomplishes.  I do not really need to focus on the fact that this is very much a female-drive story that delves into a relationship between sisters most importantly, as opposed to viable love interests, but I am happy that that is the case this time around.  With that said, it is important to note how Lee and Buck found a way to make this a well-balanced film in terms of keeping us motivated with the different characters involved and stakes at hand, regardless of whether the film was focusing on songs, humor, or its adventurous aspects.  Given that these films take years to make, I am quite pleased by the results and sure that a lot of hard work will not be overlooked.

I have managed to cover three different Thanksgiving releases and Frozen is the obvious standout, as far as family entertainment is concerned.  The film works as one that does not rely on both kid and adult humor, but instead one that is relatable to all audiences for various reasons.  I have already pointed out what really sold me on this film, but I will close by saying it is nice to see a Disney animated musical that can be crowned queen of the holiday season, when it comes to involving a whole family.  Sure it is sweet and leans on being an audience pleaser, but that is what I expect from Disney and I won’t fault them for delivering on that.

Kristoff:  You want to talk about a problem; I sell ice for a living.