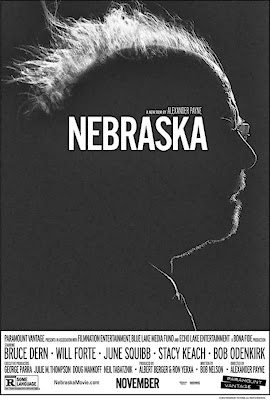 Woody:  C’mon.  Have a beer with your old man.  Be somebody.

Something I have picked up on lately is how making something look easy on film has been becoming the mark of some very talented filmmakers.  It is one thing to get very flashy with the camera and set up elaborate shots, but it is another to make people and human conversations look natural.  Improvisation is one thing, but even that can lead to unnatural results.  Being able to have a scripted scene take place and have the actors involved convey exactly what is needed to communicate realism is tricky, but it does happen.  Director Alexander Payne is not necessarily capturing super realistic dialogue on film in Nebraska, but he does something more.  Amidst the dialogue spoken in this film, Payne manages to capture a lot of reaction shots and really dwell on people living their lives in their own offbeat ways.  There is more going on than simply placing a camera somewhere and shooting, and Nebraska gets a lot of credit from me for being so affecting, given how minimal of a film it appears to be. 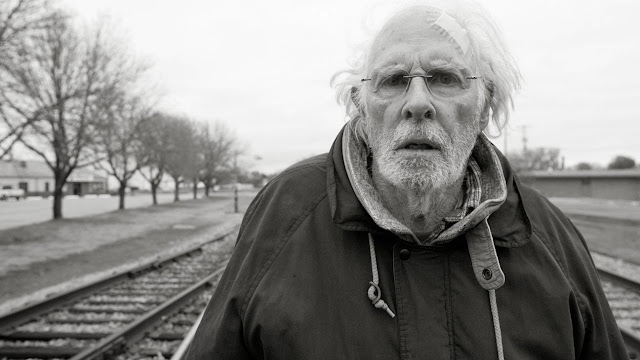 Bruce Dern stars as Woody Grant, an elderly man convinced that he has won a million dollars, based on a letter he received in the mail.  Those closest to him are quick to denounce this thought, but Woody is determined to head to Lincoln, Nebraska, where he can claim his prize.  As Woody is persistent, his youngest son, David, (Will Forte) volunteers to take Woody to Lincoln, where they can put this issue to bed.  Along the way, based on certain circumstances, Woody and David decide to stop in Woody’s hometown, where the family and old friends can gather.  News of Woody’s “fortune” quickly takes over the town, soon after his arrival, which prompts various people to suddenly have all sorts of interest in ol’ Woody Grant.

It does not mean much to me to provide some kind of prospect for awards in these reviews, as I am more comfortable evaluating the actual film, but Bruce Dern was awarded the Best Actor Award at the Cannes Film Festival this year and it left me to wonder what kind of acknowledgement he will be receiving, come this awards season.  Regardless of what actually happens, now having seen this Dern performance, it really is interesting to take in what he puts on screen.  Woody is a quiet person.  He rarely gets frustrated, opting instead to be silently stubborn about his current goal, but then again, this is a very introspective film.  As much Nebraska takes the opportunity to allow an audience to laugh on occasion, the film, at its core, is much sadder when you consider the things learned about these characters, why they are doing the things they do, and what is going through their minds, when considering the actions of others. 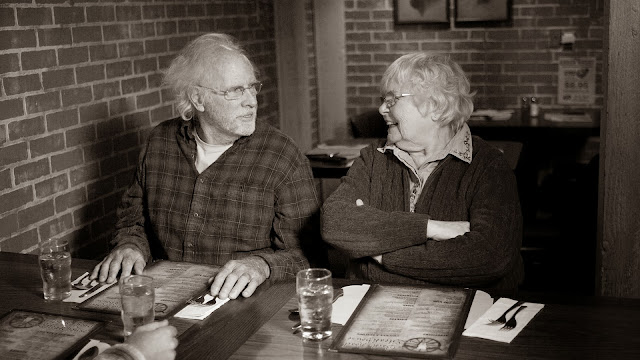 Take June Squibb for example.  She plays Kate Grant, the wife of Woody.  In the early parts of the film, there is not a lot about this character that makes her likable, as it goes beyond the realm of “old people nagging” and turns into showing us a character that seems to exist to be a bother.  As the film continues, the audience is given a real understanding of who Kate is.  Does that suddenly turn her into a likable person?  Not necessarily, but you have a level of respect for her, based on her reactions to others and gaining her perspective, based on how other events have transpired.

Nebraska is full of characters that are able to make you understand who they are, along with allow you to see them in different lights, beyond just what is displayed on the outside.  The character played by Stacy Keach is another example.  Keach plays Ed, an old friend of Woody’s, who you come to understand is not a great guy, but the film plays with how to interpret this character, beyond just being a one-note jerk.  The screenplay by Bob Nelson is very clever in presenting all of these various characters, even if some of them exist for the sake of the film’s mild comedy. 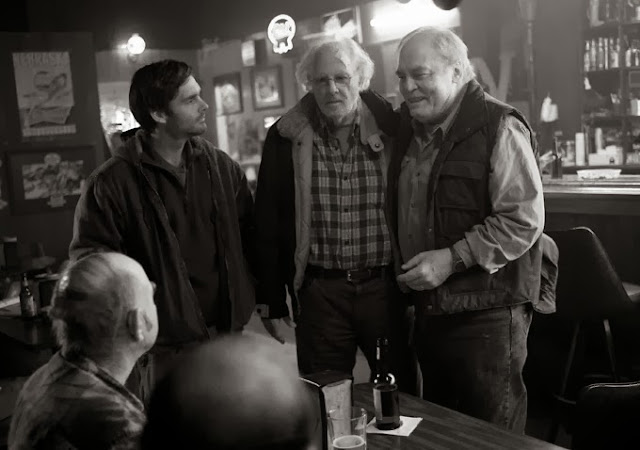 As a director, Alexander Payne does a great job of making this minimal story all the more interesting.  Choosing to shoot the film in black and white, while working with digital cameras, Payne is still able to very clearly communicate what is important in his shots, without having to do anything that is very obvious.  He has made a film that is deliberate in its pacing, striking in its presentation of the fairly plain Midwest landscapes and towns, and clearly symbolic in the way it transitions from scene to scene.  He certainly allows the viewer to take what they want out of the experience, but it should be clearly noted that he is very much in control of the film he has put together and did not simply string together these scenes of father and son going on a road adventure together.

Speaking of which, along with watching a terrific Bruce Dern really sell his performance, Will Forte also steps up in a role unlike anything he has really done before, which is to say playing a normal person.  Given that everyone around David is something of a character, Forte really shines in the straight man role, with enough in the way of sadness lurking behind his character’s innocent eyes that it really keeps you grounded with him, as he deals with everyone else.  Regardless of how much relating one can do with the situations presented, and even in spite of the very deliberate way certain characters are speaking, there is an authenticity that really comes through in these performances.  It is enough to make Nebraska a rewarding film to watch, given that it is such a simple story about a father and son driving somewhere to reach a goal that will not turn out the way that one person wants it to. 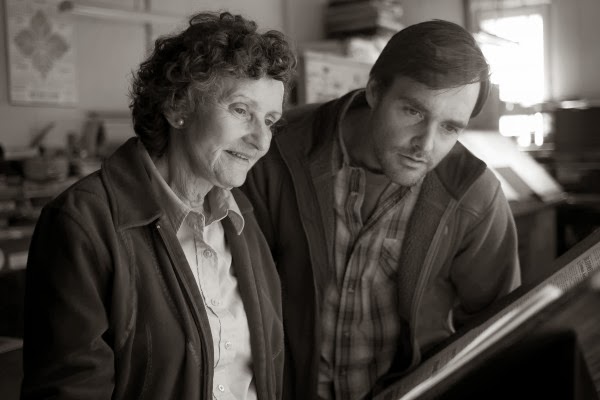 With that goal in mind, it also stands to reason that the ending of this film is not about being a powerful piece of closure, but it is one that makes you happy in the reserve it has.  Nebraska is not about wrapping up big story ideas.  It is more about characters reflecting on where they are, where they were, and what could come of things.  As a result, the film is a very good representation of what happens when you put solid, grounded performances together with a well-written screenplay and confident direction.  There is a simple movie on display here, but I found myself watching one that made the difficulty of capturing simplicity on screen look easy.

Kate:  I didn’t even know the son of a bitch wanted to be a millionaire.  He should have thought about that years ago and worked for it. 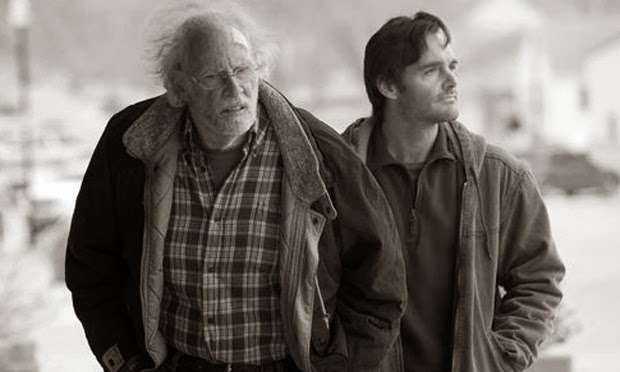 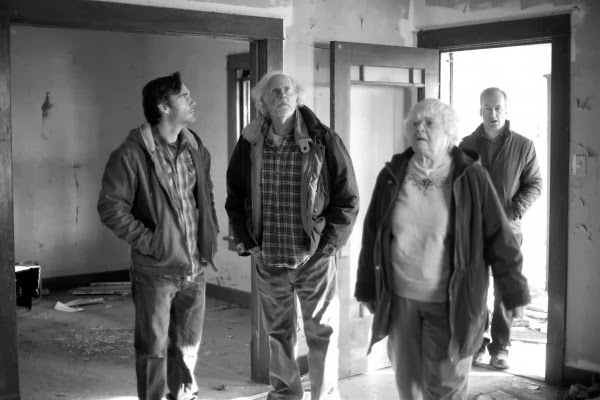 Aaron is a writer/reviewer for WhySoBlu.com.  Follow him on Twitter @AaronsPS3.
He also co-hosts a podcast, Out Now with Aaron and Abe, available via iTunes or at HHWLOD.com.
By Aaron Neuwirth
2013 Films Alexander Payne Bob Nelson Bob Odenkirk Bruce Dern Comedy Drama June Squibb Stacy Keach Will Forte
Reactions: