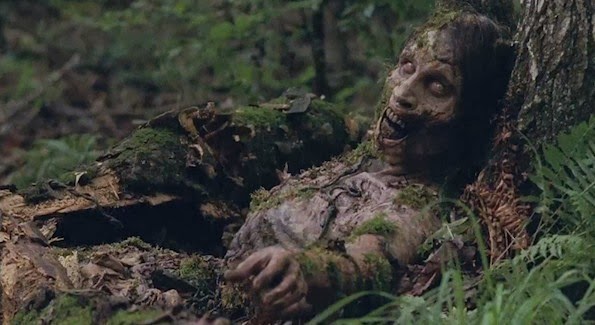 Perhaps this has more to do with my excitement to see Daryl forming a dream team of people to head out to a different (less depressing) location, only to not be rewarded with much of that, but “Isolation” felt like a step down this week.  Between being an episode that amounted to the setup for next week’s dream team episode and giving us plenty of downtime with a selection of characters that have conversations about the greater good and also revealing their true natures, there was some exciting stuff to be found, but also spots where the show went a few steps too far.


This episode begins with its weakest scene.  Okay, it actually begins with Glenn and Maggie, among others, digging graves for the recently deceased, along with a scene showing Dr. S dealing with the sick people in isolation (Hey, that’s the name of the episode!).  Following that, we then come back to where “Infected” left off, as Tyrese deals with his anger over the burnt corpses that were his would-be girlfriend Karen and some guy named David.  Rick, Daryl, and Carol are on the scene as well, attempting to console Tyrese and assure him that justice will be served.  A scene like this makes sense and even the following events have a certain logic to them, but the execution of most of Tyrese’s scenes this week feel like a clunky build up to one of his signature scenes from the comic, as opposed to good storytelling for a TV series. 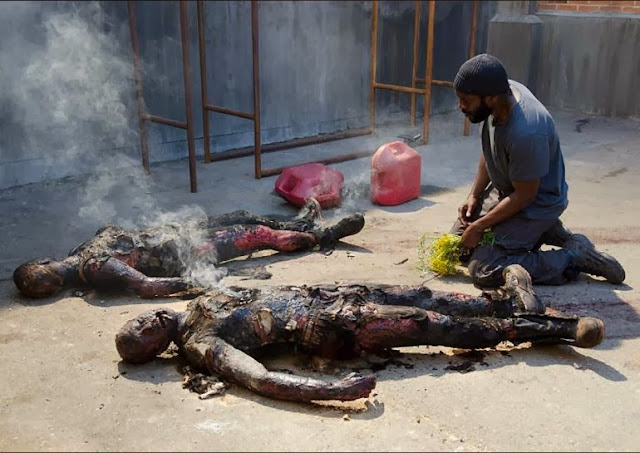 Focusing on Tyrese may be the best thing to do right now, as he is a character that obviously needs expansion upon, if he’s going to serve as a larger part of this series, but once again, The Walking Dead finds a way to only do the bare minimum to make it really work.  Only a few things have been established about Tyrese up to last episode, which amount to the fact that he is basically a good person.  This episode moves it up a notch, as we address his rage issues and stubbornness.  These are elements that tie the character to Rick, so it makes sense that the two get into a scuffle and later patch things up.  Patching things up does not go over well, as Tyrese of course cannot accept the state of things until he has some words with his sister.  Once this happens, he is all for joining Daryl’s dream team, if it means finding medicine.  Of course, once Tyrese involves himself, he sort of slumps back until a walker horde gets his blood going and his hammer flying.

Much like my issues with Carol last week (and we’ll get to her on this week’s episode soon), if providing some clunky setup in order to set a pace for a character will lead to greater things down the road, I can only hope the payoff is worth it.  As stated, it seems more like the payoff was really in service of seeing an admittedly badass scene of Tyrese going all berserker rage on walkers, but if the coming weeks lead to him being more involved with the group, possibly effectively bonding with other characters (or having an interesting relationship with his now assumed sworn enemy Carol), then great. 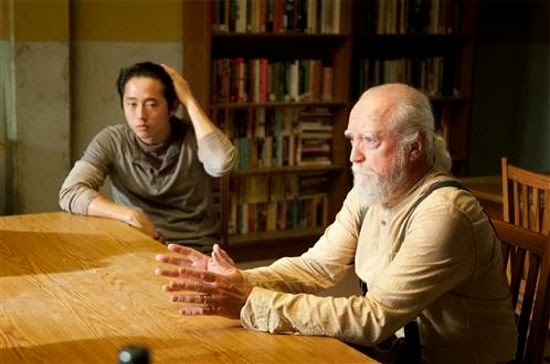 Moving on, Hershel was certainly a strong presence this week and it helps that he is one of the few likable characters on this show.  Scott Wilson has been doing a solid job with the character, ever since we have moved away from his, “that Asian fella” days and the fact that he can guide various scenes, regardless of how non-subtle or sketchily written they might be is fairly impressive.  This week Hershel pretty much spoke with everyone, which included a lengthy forest excursion with Carl, as he gathered up leaves for his cure-all tea.  I enjoyed this sequence.  It helped that it took us to a place much less depressing than the quarantine zone, but involving Carl’s arc in this series was a nice touch, which was made better by Hershel’s words.

Hershel continued to prove himself useful in this episode, as we were given another strong scene between him, Maggie, and Rick, as an explanation was given for what seemed like a good idea.  Sure, maybe someone else could have passed around the tea for Hershel, but the way he addressed why he was doing it worked well enough for me to not be upset by the show pushing its limits later by having Dr. S cough up some blood where it didn’t need to go. 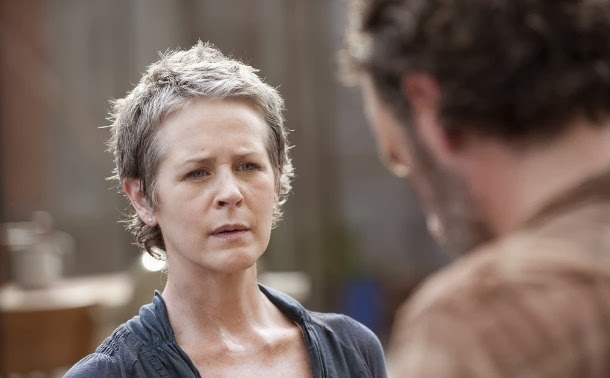 Now onto Carol.  Oh how I wish this show would have hit the brakes on this development.  So we now know that Carol is responsible for burning the bodies.  We do not know all of the details and it seems like Carol made a pretty bad call, given the state of things, but there we have it.  Last week I harped on how Melissa McBride has been getting more to do and she’s been doing her best as an actress to make it work.  I had problems with the clunky setup of her storyline last week, but this week was even less effective.  The clues are there, I guess, as the show basically screams, “she did it,” as Carol freaks out midway through the episode, but then we also get a scene that involves her being reckless, in an attempt to fix the problem with the water supply.  The show is certainly trying to show us that Carol is doing what she thinks is best for the group, but there is this weird decision to answer lingering mysteries in the span of a couple episodes, which is commendable, but also done in a way that sacrifices better characterization.  I feel like the show thinks it earned this reveal, but it doesn’t.  Instead, I wish we could have had no silly mystery-aspect and a better build up to Carol performing an act like this in the first place.

Thankfully, along with the Hershel bits, a real bright spot comes from seeing Daryl’s dream team in action.  We get some nice setup work between Daryl and Michonne, as the two discuss being a part of the group vs. looking for the Governor.  There is even a setup of another group of survivors, possibly, via a radio signal.  This is all cut short, as a walker horde stops the team in their tracks and forces them to leave their vehicle.  I’ve already mentioned Tyrese’s involvement in this scene, but it was a solid action sequence all around.  As much as I am a fan of The Walking Dead, in concept, because it is supposed to be more about characters than the zombies, having a break like this in a mediocre episode does have its advantages. 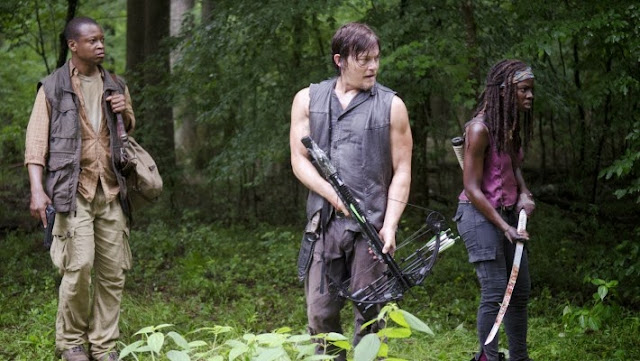 Ideally next week will be more of a focus on the dream team, which generally makes for a better kind of episode; i.e. one that has a singular focus, with maybe one other subplot at most.  This week was all over the place.  Obviously The Walking Dead has a lot of characters to keep track of, but if it becomes a detriment to making the show more effective at telling its story through character-specific plot points, providing more focus is definitely necessary.  I can say I am interested to see where people like Carol and Tyrese will end up, I just hope “clunky” is not a word I have to keep using to describe the setup of their plots.

Aaron is a writer/reviewer for WhySoBlu.com.  Follow him on Twitter @AaronsPS3.
He also co-hosts a podcast, Out Now with Aaron and Abe, available via iTunes or at HHWLOD.com.
By Aaron Neuwirth
2013 AMC Andrew Lincoln Chad Coleman Melissa McBride Norman Reedus Robert Kirkman The Walking Dead TV Series Zombies
Reactions: