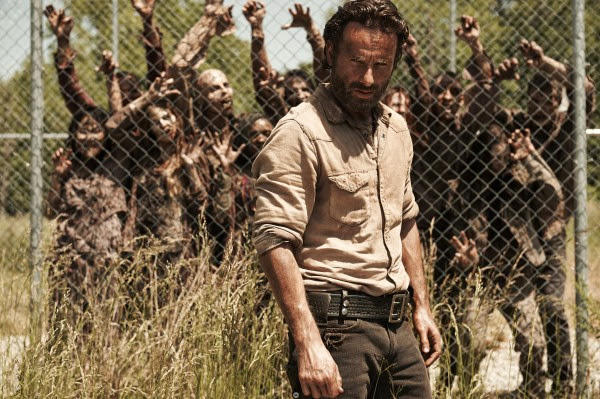 So we are going to need a cleanup on…every aisle.  If there is one thing the return of The Walking Dead has shown us, it is how creative the big zombie action sequences will continue to be.  This aspect of the show has never really been in question; especially given that horror makeup guru Greg Nicotero (who directed tonight’s fourth season premiere) has been with the show from the start.  The biggest issue with the show has always been its struggle to make the characters interesting.  Given that this season has added a considerable number of characters to its cast, both in potential recurring characters and potential red shirts/walker fodder, one can only hope that this show somehow manages to find its balance.  With all of that said, this season premiere did a solid enough job of setting up the audience with what the state of the prison is, while still making a splash in aisles 2-9 of the local supermarket.

“30 Days Without An Accident” begins with Rick, of course, as he handles a few chores, while listening to some tunes through his ear buds; effectively drowning out the large group of walkers that hound the fences of the prison.  With that, we are back into the grim reality that is this setting, though things have apparently gotten a lot better.  Following an opening title sequence (which now includes Carol and Hershel!), we see what life on the prison is now like.  Picking up a good several months after the end of last season, there is a nice semblance of order that becomes apparent quickly.  Most intriguing is the concept of a council, which includes Hershel and several others we’d expect, but notably not Rick. 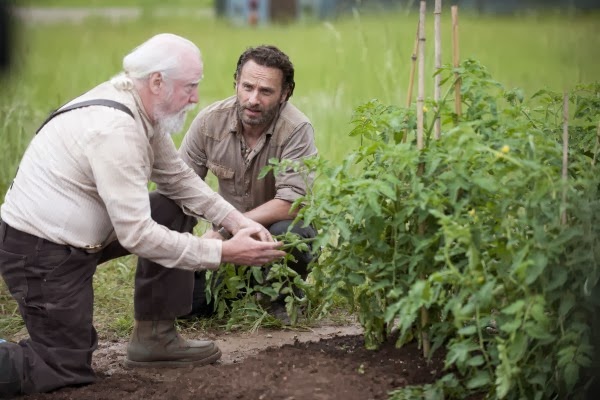 This whole early part of the episode brings the audience up to speed with the characters.  Hershel has a sweet, new leg.  Daryl is now a heart-throb both outside and within the universe the show exists in.  Glenn and Maggie are in super-duper boring love.  Tyrese and Karen have a little thing going on.  Carol is taking the concept of extracurricular activities to new levels for the kids.  And Carl needs a haircut.  This is all well and good, as far as quick information goes, and allows the show to get these catch-up moments out of the way before moving to its two distinct plots.

Let’s deal with the Rick stuff first.  While walking around for the purposes of simple harvesting (Rick seems to have carte blanche these days, despite not being on the council), he encounters the dirtiest Irish woman in Georgia, Clara (played by Kerry Condon), who claims that she and her husband are starving.  Rick, being who he is, approaches the situation with as much directness as possible, before agreeing to follow Clara back to her camp.  If everything works out, Rick will be happy to lead Clara and her husband Eddie back to the prison, where they can live with much less worry in their lives.  This being The Walking Dead, the result of this subplot is of course as dour as possible. 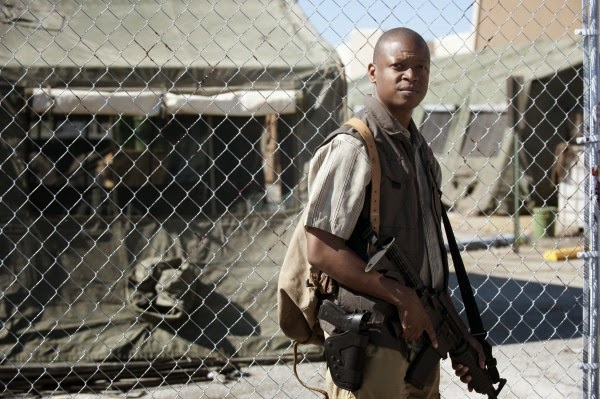 Once Rick discovers the truth of the situation, which amounts to Clara being overtaken by craziness in a world where that option makes a lot of sense and seeing that what’s left of Eddie is most likely stuffed inside a burlap sack, he deals with the scenario as deftly as possible.  Rick avoids a knife attack, stands by to watch Clara commit suicide, and then comforts her with the prison membership questions test.  It is a fine sequence, as the actors do solid work, but really doesn’t give us anything new to work with.  Rick is still in control and the show continues to make us aware of how on the brink everyone is in this reality.  Given that this is a season premiere, an isolated story about something interesting that happens to Rick in a one-off scenario, rather than show us something interesting about Rick, feels like a bit of a waste.  Of course, we could just be seeing a small level of calm before a much bigger storm hits, but there are so many other characters to deal with.

Speaking of which, the other main plot of this episode revolves around a supply run that is aided by D’Angelo and Cutty from The Wire.  Daryl, Michonne, Glenn, and the future ex-boyfriend of Beth’s, Zach (Kyle Gallner), also join in on this supply run, as they head to a fenced off supermarket.  The audience is let in on some important information earlier than the rest of the characters, by making use of a crane shot to show the crashed helicopter on the roof of the building.  D’Angelo, who I guess I will refer to as Bob, his character name on this show, has a brief digression, focusing on his past love for alcohol, which ultimately leads to the whole roof of the building caving in.  It is some nice enough work done to establish a new character, along with the clunkier exposition from earlier in the episode, but serves as just as good of a reason to give the audiences a large and creative action set piece, fitting for a season premiere. 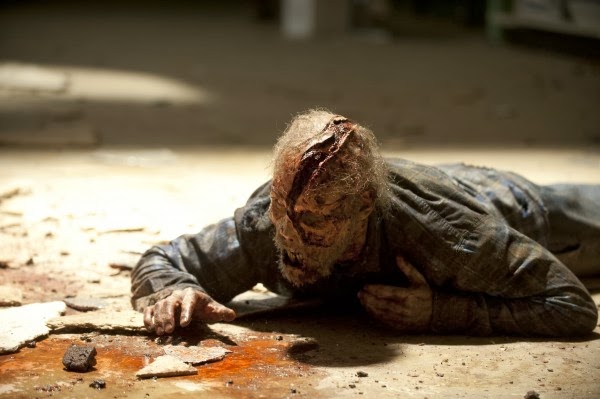 As the day ends, the show essentially settles for a “what did we learn today” type situation for various members of the cast.  Tyrese is uncomfortable with going on runs and killing fence zombies, but he’ll make do.  Glenn and Maggie will continue to have boring conversations about whether life is worth fighting for (I do love these crazy kids though).  And Beth gets to play with her activity board, which happens to be a day counter for when someone dies.  On this day the death so happened to be the boy she was seeing, but Beth has decided she’s cried enough and luckily Daryl’s arms are enough to support her during this not-so-rough time.  Hopefully, on the next morning, Beth will regale the prison with a lovely song!

This episode does provide some brief speckles of plot as well.  Michonne has been traveling by horse to different locations, in search of the Governor.  Rick has become a bit savvy of walkers with very bloody eyes, which the episode follows up on by showing us what appears to be a grown man acting like a kid, young enough to be friends with Carl, die from some kind of sickness.  As if The Walking Dead did not have enough ways for people to die already, the introduction of some kind of disease will provide plenty of reasons to be on the lookout for potential sources in the upcoming episodes. 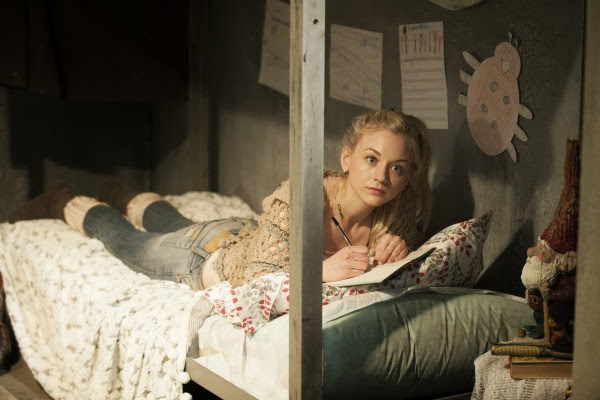 Overall, I liked this episode quite a bit.  It reintroduces audiences to a world they clearly seem to love, despite its dourness, and provides a lot of setup for future episodes.  While it does not so much feel like a season premiere as it does a time jump from the previous episode, it basically does all it can to be on the very good side of what an episode of The Walking Dead has to offer.  I can attempt to be a little less snide in future episode recaps/reviews, but something that continues to frustrate me about this show is its decision to settle.  It does just enough character work to get by.  There are just enough seeds in the plot to show some progression.  Rick is just enough on the right side of sanity to keep him from being more interesting.  Fortunately the zombie work on this show has always been stellar and the returning cast members have a good chemistry with one another (Carol and Daryl look like old pros at this point).  If this season (complete with new showrunner Scott Gimple) can successfully make the other key aspects of the series feel consistently stellar, I will be even more pleased. 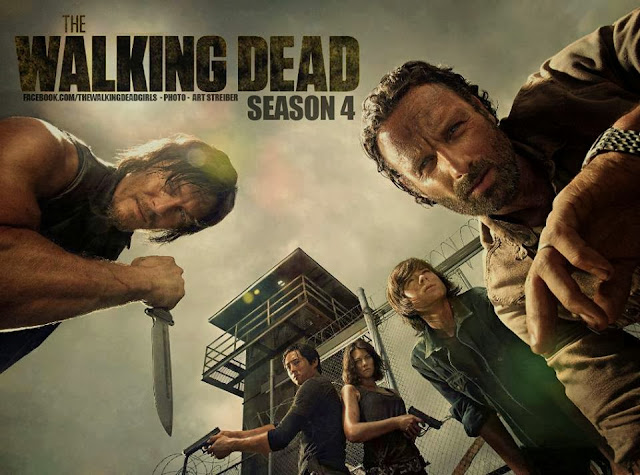