‘The Fifth Estate’ Has Plenty of Leaks 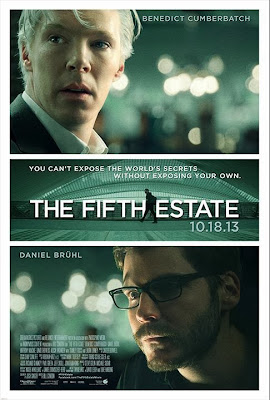 Julian Assange:  Man is least himself when he talks with his own person. But if you give him a mask, he will tell you the truth.

It is almost funny how long I put off actually writing a review for The Fifth Estate, the Bill Condon-directed film, which adapts two different books that focus on the news-leaking website WikiLeaks and its founder, Julian Assange.  The delay is not because I had a lot to consider, after seeing the film.  It is actually quite the opposite.  The Fifth Estate left me feeling with almost nothing, as the film is all over the place in presentation, one-sided in its overall viewpoint, and stands more as a shell containing a great performance from stars Benedict Cumberbatch and Daniel Bruhl, which would break apart quite easily without them.  It is unfortunate, as I believe there could have been a way to make this story more interesting, especially given the talent involved. 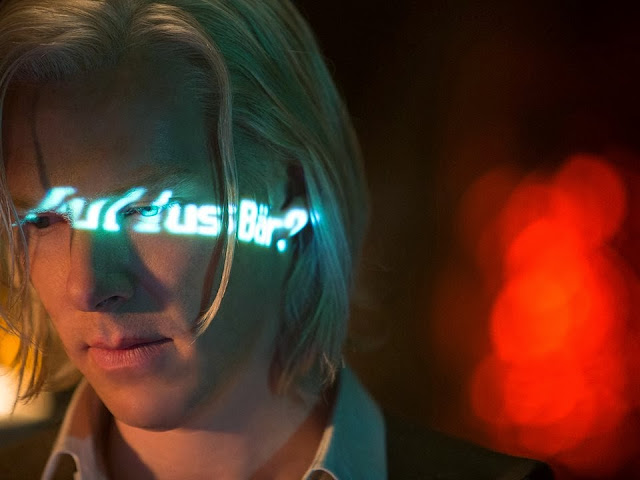 The film begins by throwing you into a series of events already in progress.  We get a basic understanding of what WikiLeaks is, only because of the introduction of Julian Assange (Cumberbatch) relies on him explaining his own personal thesis for what it represents.  Assange is joined early on by fellow hacker Daniel Domscheit-Berg (Daniel Bruhl), who becomes another member of the WikiLeaks team, which essentially serves as an underdog watchdog over powerful people.  The two hackers work as best buds with an idea in mind that involves stopping corruption that seems to be in plane site, such as large banks that deal in intolerable practices, but Assange wants to go further.  He eventually gains access to the largest amount of confidential intelligence documents in U.S. history, which could possibly put a number of people in jeopardy.  The question of whether or not exposing secrets in a free society has a cost becomes the subject for all involved to consider.

One of the only interesting things I have taken away from The Fifth Estate is how the real Julian Assange has gone out of his way to denounce this film (spoiler alert: Assange does not die at the end of The Fifth Estate).  Regardless of my thoughts on this subject and what Assange has done in real life, he presents a point, as this film pretty much does everything it can to take this man down, after setting him up as a guy fighting for a greater good.  This would feel like less of a problem if the film had anything more interesting to say, but it instead feels like an information dump from specific sources, with some snazzy cinematography and editing to give the film an edgy vibe.  Films that deal with a modern times issue and somehow still manage to be quite entertaining are all well and good, but The Fifth Estate is most definitely not in the same league as something like The Social Network.
Based on two books: WikiLeaks: Inside Julian Assange's War on Secrecy by David Leigh and Luke Harding and Inside WikiLeaks: My Time with Julian Assange and the World's Most Dangerous Website 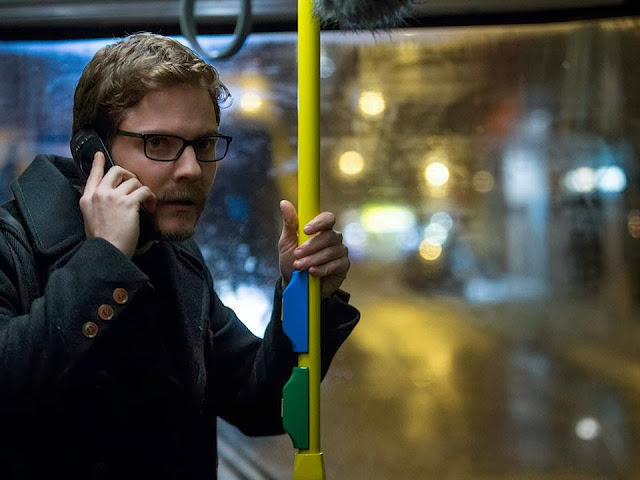 by Daniel Domscheit-Berg, screenwriter Josh Singer provides the film with a structure that feels headed in an interesting direction, only to end up feeling unfocused, but still manages to throw a lot of negativity towards Assange, who ultimately serves as a mysterious fellow with a history shrouded in possible strange activities that necessitate his platinum hair, obsessiveness, and a mocking sort of attitude towards those who get in his way.  On the other side we have Daniel, who is portrayed as conflicted, but ultimately principled in what he thinks is right.  I guess it helps when it is your book being adapted into a film to be more easily painted as the “good guy.”

The film may be unsuccessful in balancing the various aspects of this story, but at least Cumberbatch and Bruhl deliver strong work, particularly in their scenes together, as the duo has great chemistry.  Cumberbatch will rightfully walk away with the most praise, as he really dives into this persona of Assange, complete with the very specific accent and the kind of confidence it would take to be the kind of man that this film is showing us.  Bruhl is solid here too, even if a lot of his work involves him furrowing his eyebrows when the going gets tough or looking timidly at computer monitors, as he realizes why he and Assange need to change up their game plan or else.  Still, between this film and Rush, Bruhl is certainly on the rise as an actor, just hopefully not in these bland Hollywood-ized retellings of stories. 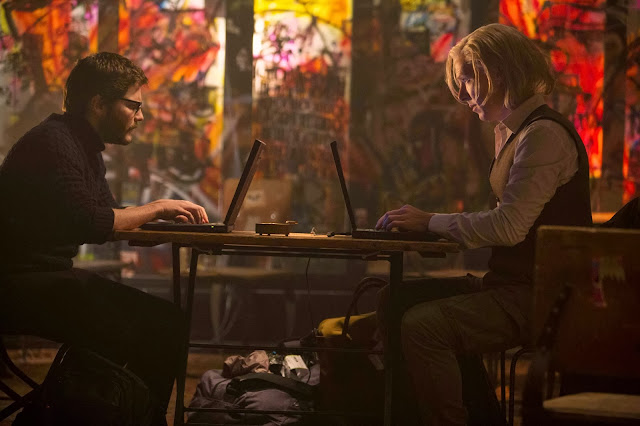 Being bland is another big issue of the film.  Even if it does away with being a focused, fact-based analysis of the ethics of something as important as leaking highly secretive knowledge to the public, settling for a trashy, techno-thriller would be more entertaining if the film actually was made as such.  Unfortunately, it isn’t.  Clocking in at just over two hours, The Fifth Estate is long and feels that way, as the film shows lots of scenes of intense typing and attempts to include a number of additional subplots that end up feeling like a waste of time.  This most notably occurs when the film attempts to add some stakes in the form of a nice Middle Eastern man played by Alexander Siddig, whose life could be in jeopardy if Assange goes through with his biggest leak.  Given that this is a film about hackers posting information, this feels more like a strange digression from the film’s most palpable aspect, rather than an interesting result of how WikiLeaks could put someone in harm’s way.

Director Bill Condon does try to add some slickness to the film, but if often times feels either out of place or as if the film is trying too hard.  The opening title sequence, for example, is a sort of visual log that tracks the rise of reporting throughout time, which is weird when you consider that the image of hieroglyphics will still be on your mind ten minutes later, when the characters arrive at a techno-infused rave and the metaphoric depiction of a group of bloggers hard at work is an endless sea of desks with laptops on them.  Elsewhere, The Fifth Estate continually progresses through time with the use of montage sequences; enough to put a Rocky movie to shame.  The attempts to bring more life to this film go from admirable to remarkably unnecessary, as I found myself in greater desire of searching Wikipedia to learn more about WikiLeaks, rather than contend with this film. 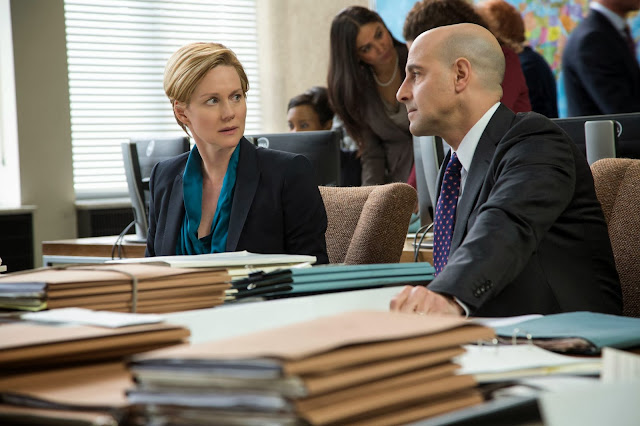 It may be worth noting that this film does have a large supporting cast that includes Laura Linney, Anthony Mackie, Stanley Tucci, David Thewlis, Alicia Vikander, and more, but the film is at its best when it deals with a friendship and how it became fractured.  The final act of this film also proved to be more entertaining, only to haphazardly close on the typical “where are they all now,” text, along with a strange filmmaker choice to have Cumberbatch as Assange address a camera with a cheeky, self-aware bit.  If only the film could have earned this type of closure.

Julian Assange:  If we could find one moral man, one whistle-blower. Someone willing to expose those secrets, that man can topple the most powerful and most repressive of regimes. 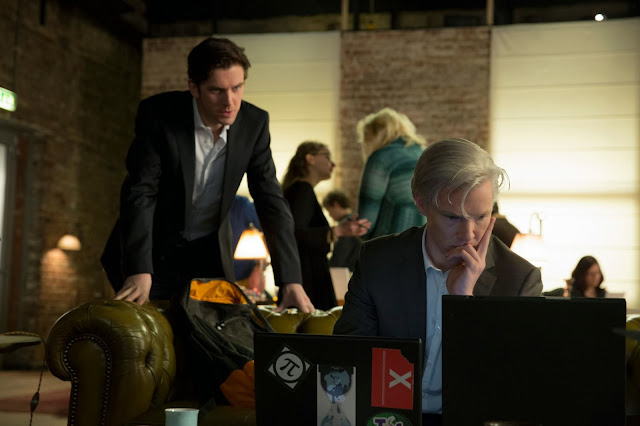