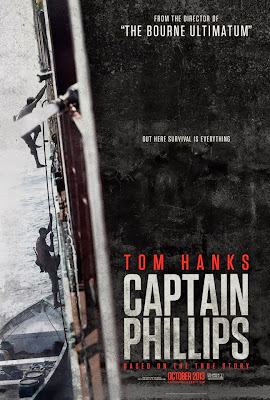 There are many great moments in Captain Phillips, the drama that recreates the true story of a hijacking of a container vessel by Somali pirates that took place in 2009, based on the memoir of Captain Richard Phillips.  One moment that comes to mind is a look that Tom Hanks gives during an early part of the film.  It is a simple acknowledgment of something pivotal that is happening to his ship, but he finds exactly the right way to do this with just an expression on his face.  This is an actor who has been working for over 30 years and still finds new ways to impress me.  It could come down to the familiarity with ‘Tom Hanks the actor’, but he is able to say so much with a glance that it truly makes it all worthwhile when a film as good as Captain Phillips is manages to be anchored by very fine performance. 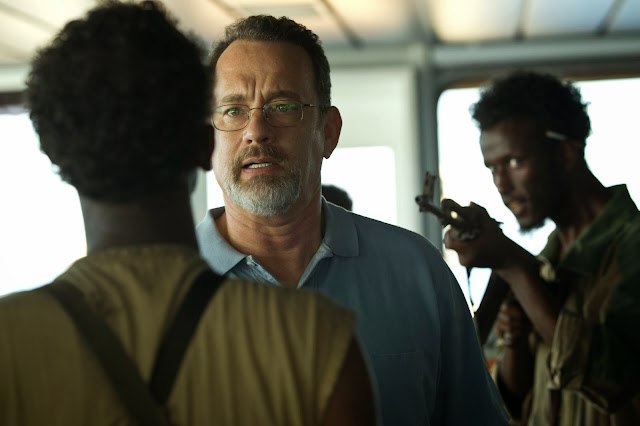 Hanks stars as Captain Rich Phillips, the commanding officer of the U.S. container ship Maersk Alabama.  While at sea, moving through international waters, around the coast of Africa, a threat emerges.  Somali pirates are bent on making their way to the vessel, boarding it, taking hostages, and negotiating for a large sum of cash.  Captain Phillips does everything he can to stop this from happening, only to then do everything he can to keep the pirates from finding the rest of the crew aboard the ship.  Before long, it comes down to Phillips and four pirates, who find themselves in way over their heads.

I can divulge how much information I knew about this story before going in, but it does not really matter.  The fact that a film like this manages to join the ranks of many other successful films based on true stories, with outcomes that are widely known to the public is something to be proud of.  Director Paul Greengrass, who gave himself what may have been an even harder challenge, from certain perspectives, with United 93 back in 2006, has built quite the tense feature, based on the script by Billy Ray, who adapted Phillips’ book.  Even with a certain level of inevitability in play, the tension in this film rarely lets up and the craft involved to recreate a situation like this is quite impressive. 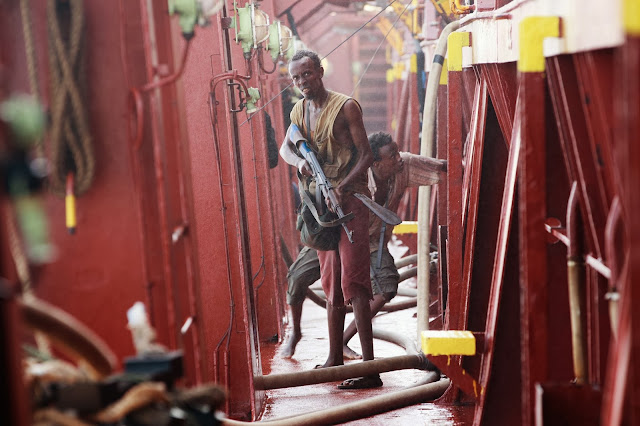 Invoking the Greengrass name of course brings to mind the ‘shaky cam’ for many, but the difference with Greengrass and the various action filmmakers that have adopted this technique over the years is how it serves the narrative.  Does this mean that the style is absolutely necessary?  No, but Greengrass has found a way to build involving narratives that are based around the docudrama filmmaking techniques he is so fond of utilizing.  Moreover, the fact that he can have the camera track all the action in this type of format, while on the ocean, and keep the viewer invested on an emotional level, rather than have them become seasick, is the mark of someone who knows how to hone their own style appropriately.

It is hard to consider the logistics involved in building a film like this.  Much as I like to give credit to the use of technology to bring audiences to whole new worlds or something like space, which I saw last week with Gravity, Captain Phillips certainly invokes a similar sort of consideration, but from the standpoint of a film dealing with a completely realistic situation.  I am aware that a real container ship was used in the making of this film, but watching other naval vessels, helicopters, and lifeboats all come into play and really sell the idea that this is as real as it gets once again manages to leave me impressed. 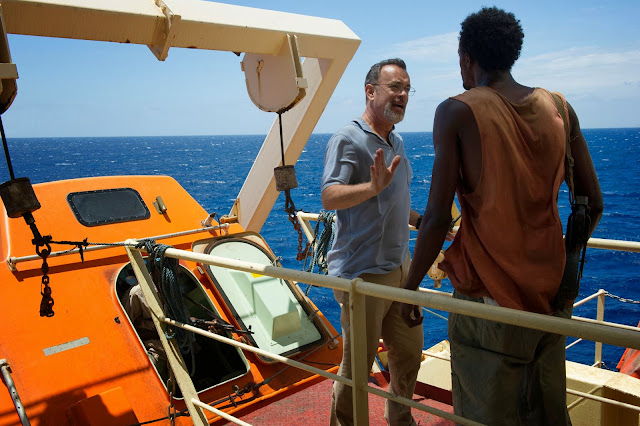 Speaking of things that impress, I have already mentioned Tom Hanks at the beginning of this review, but the praise does not stop there.  Something that has certainly been evident in previous films by Paul Greengrass, including Bloody Sunday and his Bourne films, is how they all feature good actors providing really solid performances, but in a manner that underplays what is going on.  It is rare to see anyone go more over-the-top than they have to in Greengrass’ films and Tom Hanks really nails that aspect as well.  We are given all we really need to know about Phillips early on, before things take a turn for the worse, but watching him deal with the situation presented to him really provides Hanks with deliver another rock solid performance that feels like less of a transformation into a persona and more like a real guy who just happens to look and sound like Tom Hanks with a New England accent.

Credit also goes to Barkhad Abdi as Muse, the lead pirate who does the most verbal sparring with Hanks, leading the intimidation game, with an even more hyper pirate, played by Barkhad Abdirahman, standing right behind him (with a loaded AK-47) every step of the way.  Keeping in mind that these pirates were young men, somewhere between 16 and 20, it is interesting to see how their personas match up with the situation that grows far out of hand.  While Captain Phillips functions more as a procedural than a character drama, the work done to give us the most it can in regards to who these pirates and Phillips are as people is more than satisfactory, which elevates the film even further. 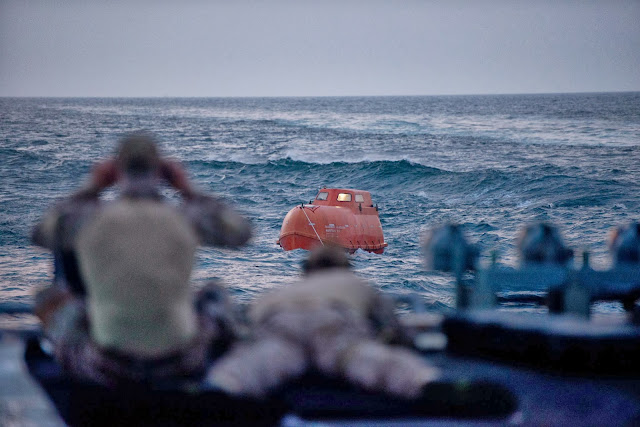 The film really is a procedural thriller though.  Zero Dark Thirty may be the closest (and most recent) film to think of in relation, but that film did wonders with the way it balanced the scope of the scenario involving the hunt for Bin Laden and the years it took in the process, mixed with the final section of the film, which focused on the operation conducted by Seal Team Six.  Captain Phillips has a singular focus and that is to present one scenario, taken from the perspective of one man, who managed to survive the whole ordeal.  In this film, SEAL Team Six is presented more as a means to an end, rather than the force you have been waiting to see.  Not that they do not matter or were anything but necessary, but the film does such a fine job of keeping you gripped by a scenario that features Phillips and the pirates, that there is something similar to a sense of foreboding, once it is clear that the SEALs arrival means there is only one possible outcome.

Given how straight-forward this film is, I can only continue to give praise to the film for the way it does not feel prolonged, despite lasting for over 2 hours.  It comes down to the confidence in the filmmaking and the way it handles tension.  I was legitimately worried for much of this film, in a way that I found to be satisfying, based on what I knew I was getting into.  The type of entertainment found in a film like this comes from how thrilling it is to see this kind of scenario play out, even when one pretty much knows where it is all going.  Having an actor as great as Tom Hanks is certainly a great way to make a film like this work all the better, but it most definitely helps to have a director like Greengrass working with a very talented crew to make sure the level of reality being depicted is balanced by well-crafted suspense.  Captain Phillips feels like a strong accomplishment from all involved and will certainly be making waves on its way to awards season.

Captain Phillips:  You are no fisherman. 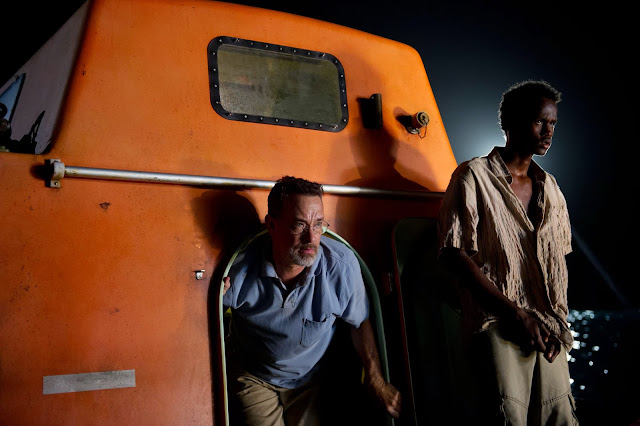 Aaron is a writer/reviewer for WhySoBlu.com.  Follow him on Twitter @AaronsPS3.
He also co-hosts a podcast, Out Now with Aaron and Abe, available via iTunes or at HHWLOD.com.
By Aaron Neuwirth
2013 Films Barkhad Abdi Barkhad Abdirahman Based On a True Story Billy Ray Captain Phillips Drama Paul Greengrass Thriller Tom Hanks
Reactions: