‘All Is Lost’ With Old Redford And The Sea 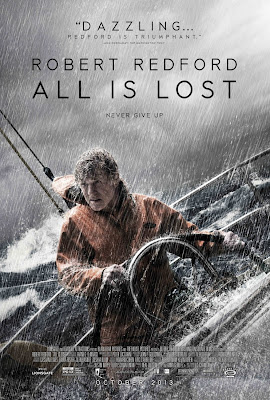 All is Lost is a film that allows the viewer to watch physical acting taken to an extreme.  It does not involve fight scenes or skillful choreography, though it can be incredibly exciting to watch at times. What it really involves is a lone figure going through incredibly difficult trials in order to ensure his survival.  While this is occurring, we see a myriad of emotions and expressions take over a man’s face and body language.  We watch someone’s thought process as he is involved in many difficult situations.  There is a real skill involved in finding the right ways to depict this person.  It does not hurt that the action taking place in the film around him is quite compelling in the ways we see one scenario morph into so many different levels of danger.  Regardless of how minimal the film may be in sketching out a story for itself, it is the quiet but powerful lead performance, accompanied by skilled direction that makes All is Lost a film worth finding. 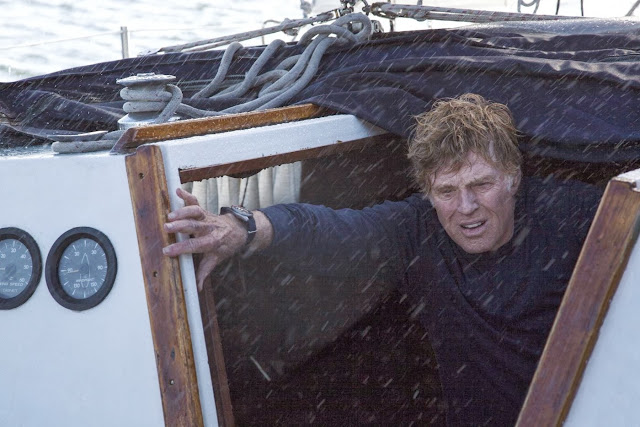 Robert Redford is the man we are dealing with in this film.  We do not even learn his name over the course of the film, simply the plight that our man must deal with.  The setup is very simple, while sailing on the Indian Ocean, our man is awoken by a container crashing into his boat.  This container creates a hole that does enough damage to cripple our man’s voyage.  He is forced to do what he can to repair his boat, but things only escalate based on weather and dwindling supplies.  Despite being a resourceful sailor, our man will be faced with challenges that are hard to tackle.

While the film simply credits Redford as “our man,” it would almost be better off at naming him Job, after the biblical figure that faced one horrendous disaster after another for seemingly no reason, other than to test his faith.  All is Lost does not attempt to bring a faith-based perspective to the proceedings (at least it did not for me), but it does show us a man who is continually forced to deal with drastic scenarios, many of which involve him putting his life at risk.  The film is all the more effective for making us believe that it really is 77 year-old Robert Redford performing all these activities, while stuck out in the middle of the Indian Ocean. 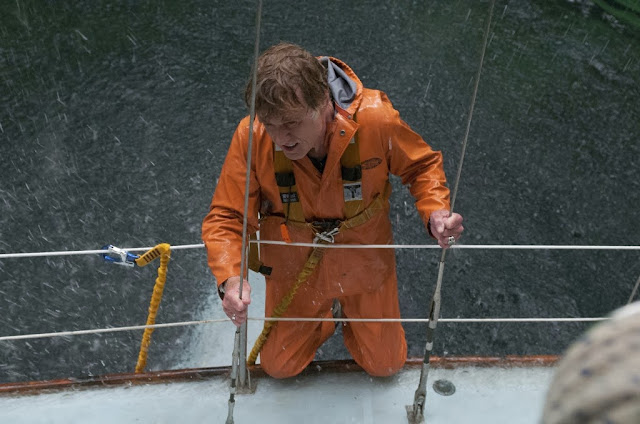 All is Lost comes from director J.C. Chandor.  It is his second feature film, following the critically acclaimed Margin Call, which was a depiction of the 2008 financial crisis.  While that was an ensemble film, focused almost entirely around characters having a dialogue with one another, All is Lost is a film that features one lone character, with almost no dialogue whatsoever.  The film is also much more complicated from a technical standpoint, as films taking place on water almost always are.  Regardless of the special effects work done to portray the storms taking place and the digital creation of certain images (or erasing of certain elements), this is a film that works in the way it shifts around its scale.  There are times when the film is required to really open up and show all of the area our man needs to contend with at any given time, but the film also knows how to box you in with our man, showing how small he is, in comparison to what is going on around him.  Cinematographer Frank G. DeMarco does a wonderful job of going through different means with his setups to show the action taking place and create a character out of the setting of this film.

Much of the praise for this film really comes back to Robert Redford’s performance.  Could others have pulled this off?  Perhaps, but Redford is the one who did and he really is delivering a fine performance all the way through.  The film very purposefully does not expand on who our man is, but one gets a pretty solid understanding of what we need to know about him.  It helps that the presence of an older man, weary or not, is presented in the form of Robert Redford, which already inspires a certain level of understanding about the character.  Adding onto this is the way the film has our man constantly using what he has around him to attempt to solve his situation.  Some things do not work, which causes frustration.  Other plans do work, but require a lot of effort or a level of danger in performing the activity.  Throughout all of this, Redford never looks to be overextending what is required of him as a performer.  The circumstances change throughout the film and it can be affecting to watch, but this is an amazing performance for a variety of reasons and a chief reason to see this film.

There is only so much to say about a film like All is Lost, as it has a very uncomplicated setup and follows through with an effectively told and efficiently made story.  Robert Redford is tremendous in this film.  The depiction of sea life going from calm to stormy is constantly exciting, as we watch our man fend for the life of himself and his boat.  It is a motion picture that may seem small, but is well worth seeing on a big screen to take in the experience.  It is rare to be this engaged, while floating adrift. 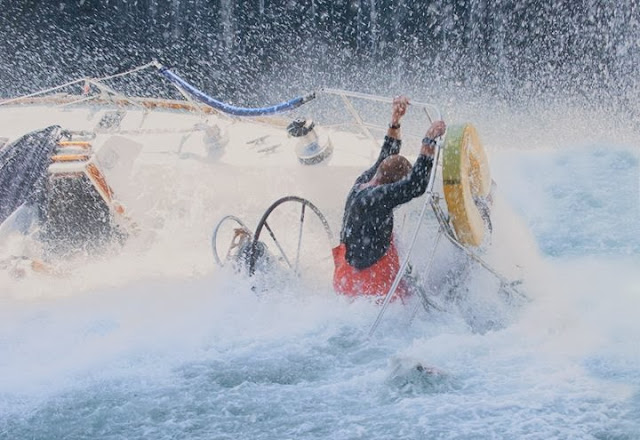 Aaron is a writer/reviewer for WhySoBlu.com.  Follow him on Twitter @AaronsPS3.
He also co-hosts a podcast, Out Now with Aaron and Abe, available via iTunes or at HHWLOD.com.
By Aaron Neuwirth
2013 Films Drama J.C. Chandor Robert Redford Thriller
Reactions: