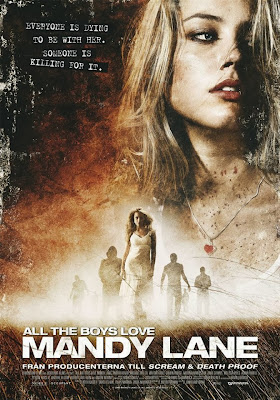 All The Boys Love Mandy Lane can now be finally seen by all.  The first thing to really say is ‘Mandy Lane’ is an effective horror feature that trades in true originality for solid horror craftsmanship.  There is a lot one can unpack in explaining the history behind how this film made back in 2006 is just now being released, but I see no need to really do so.  The best I can do in this regard is stating how great a double feature of All The Boys Love Mandy Lane and You’re Next would be, as far as ‘good horror movies with troubled distribution history’ go.  There may have been a delay, but the film certainly stands on its own as far as being a solid entry in the genre.

Everything comes down to the film being about a group of teenagers staying at a secluded farmhouse for the weekend, only to be killed off one by one by a mysterious figure.  It is as standard as horror films can get, but there is a nice setup and some interesting turns throughout.  We begin with an introduction to Mandy Lane (Amber Heard), a beautiful girl who has evidently grown into a status of being ‘hot and unattainable’ by the boys at school.  A disastrous event involving another schoolmate leads to Mandy befriending some of the more popular kids at school.  This leads to the aforementioned farmhouse trip and the bloodshed that comes with it.

What is it that makes All The Boys Love Mandy Lane worthwhile?  Jonathon Levine’s direction and the way a lot of the cast underplay their roles are most likely my reasons.  Let me start with Levine’s direction, which extends to the movie’s construction as a horror film and how the crew involved was of course essential to make it work.  Given that the premise is fairly basic, having what seems like assured confidence for a director who was making his debut full-length feature film at the time is very encouraging.  Having gone on to direct films such as 50/50 and Warm Bodies, it is easy to see how he has grown as a director, but also still flirts with similar traits that fall in line with each subsequent film.

As a straight horror feature, with no ‘winking’ at the audience and very little done to project a level of black comedy on top of what we are seeing, it was actually kind of refreshing to witness a film that is proud to serve as a ‘dead teenager’ movie.  Now, saying that, it is not as if I went in wanting to see blood and gore, but the film certainly delivers a satisfying amount for horror-hounds, while also creating characters that you feel sorry for.  Is this the greatest development of characters one can witness?  No, but I do not tend to be annoyed enough by characters to ever want to see them be murdered in horrible ways and I was genuinely shocked by how graphic some of the deaths in this film were.

The effectiveness of these killer scenes comes from what Levine tried to do on a technical level.  The cinematography by Darren Genet has a sort of washed out feel to it, which is counterbalanced by a look akin to something out of a Terrence Malick film.  Now read into that however much you would like, but it is the amount of open space on a farmland that brought this thought to mind, which of course diminishes, once we get to the very grindhouse-looking horror sequences.  It also does not hurt that the sound design on this film has been amplified in a way that makes the scares and thrills all the more effective.

Moving onto the cast, I was pleased to see that Amber Heard did a fine job of showing why all the boys do seem to love Mandy Lane.  It is not so much her beauty, which is obvious, but her attitude throughout the film.  Mandy Lane does not so much have a lot of interesting things to say or seem like a sort of dream-girl, she just functions as a rational human being who also happens to be quite fetching.  We learn about as much as we need to from her, but Heard is doing exactly what she needs to, in an effort to have us very intrigued by her character.

The other characters mostly fall in line with being ‘stock’ horror characters, but even the most grating members of this group did not make me out and out despise them, so much as see that their time would soon be up, so it doesn’t really matter.  The fact that the banter between these folks felt natural enough also contributed to why they worked for me.  Lastly, I will mention Anson Mount (who, 7 years later, is currently the star of AMC’s Hell On Wheels).  He plays a ranch hand who delivers the perfect kind of “what’s going on with this guy” performance that works in the film’s favor.

The drawbacks to a film like this do come down to how familiar one can be with this kind of horror film.  While certain twists and turns in the film feel fairly obvious, it does have other elements that sort of mix up the approach.  All The Boys Love Mandy Lane certainly gives the impression from its opening title sequence that it understands the kind of film that it is, so expecting something truly unique may be a bit much.  With that said, it is not as if there are better or worse variations on this type of horror film.  All The Boys Love Many Lane exists as one of the better ones, even as it plays things straight and follows through on its story in a traditional, though well-crafted manner.  I am just happy that everyone will now have the chance to check it out for themselves.

Garth:  I think we need to get out of here: 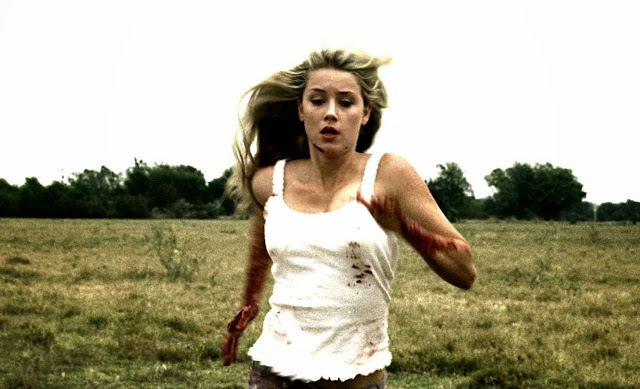 Aaron is a writer/reviewer for WhySoBlu.com.  Follow him on Twitter @AaronsPS3.
He also co-hosts a podcast, Out Now with Aaron and Abe, available via iTunes or at HHWLOD.com.
By Aaron Neuwirth
2006 Films 2013 Films Amber Heard Anson Mount Horror Films Jonathan Levine Thriller Whitney Able
Reactions: