‘We’re The Millers’ And The Audience May Laugh (Movie Review) 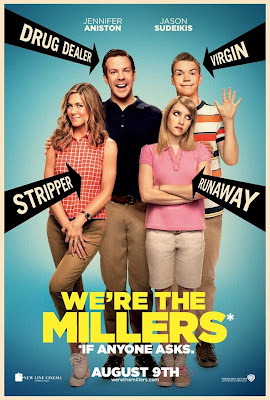 While I have seen plenty of raunchy comedies (This Is The End, The To Do List) and ones that skew towards the darker side (The World’s End, The Hangover: Part III), let alone perfectly safe comedies (The Internship) this year, I can’t say there have been too many pure wacky comedies.  I guess The Heat was pure wacky comedy, but I had more fun with We’re The Millers.  It is always tough to grade comedies, especially the sillier ones, but for whatever reason, even in spite of the clear issues, We’re The Millers did enough to make me enjoy my time, while watching the film.  As I dive in, maybe it will become clearer as to why. 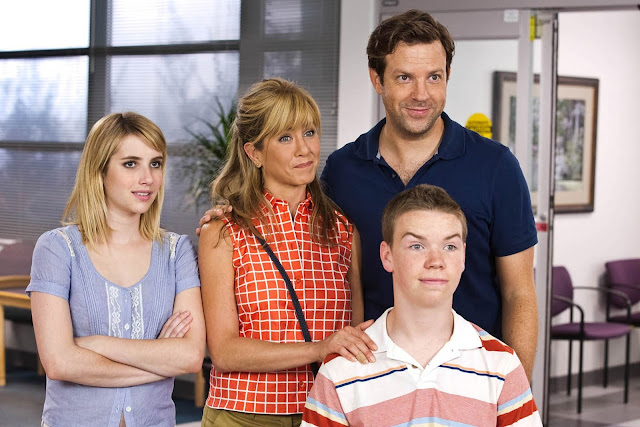 Jason Sudeikis stars as David Clark, a hapless drug dealer tasked with performing a drug smuggling job, or else he’ll most likely be killed by a wildly rich drug kingpin, played by Ed Helms.  In order to better enable him to get across the border, David figures that posing as a family man, complete with a normal-looking, nuclear family, will increase his odds.  With this plan in mind, David hires his neighbors: A stripper named Rose (Jennifer Aniston), a dorky teenager named Kenny (Will Poulter), and a runaway girl named Casey (Emma Roberts).  The plan seems simple, the group manages to pack an RV full of marijuana, and the long drive from Mexico back to Denver becomes a crazy adventure ideally designed to make the audience crack up.

And crack up I did…at points.  I think there were a lot of very funny scenes through a good portion of this movie.  Given what the plot is, I was pretty happy to accept how ridiculous everything was going to be.  When you introduce Ed Helms character by establishing that he has a pet orca, simply because he’s that rich, I’m basically fine with thinking Jason Sudeikis and his fake family can easily move in and out of Mexico with a giant RV full of drugs.  There are other issues I will get to, but my problems do not really extend to deep analysis of these characters or the film’s logic, because in the realm of movies, this film pretty much sticks to being outlandish, as opposed to grounded into any sort of reality. 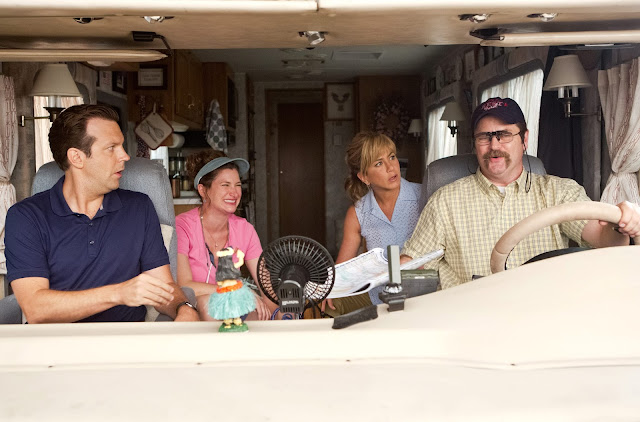 Of course, the big issue is when the film tries to make you care, which seems like a mistake.  Through most of the film, we are essentially watching a lot of wacky shenanigans that work best based on the chemistry between the actors, let alone how game some of the supporting players are.  I’ll get to those actors as well, but sticking with the topic at hand, the film does attempt to add some kind of value to the story in regards to character arcs and overall sentiment, when there is really no point.  Even as the film continues to be humorous during its third act, it has those incredibly familiar beats of specific choices being made to make you feel like lessons were learned and characters will grow closer because it.  It is the false sweetness that wants people to relate to this fake family for whatever reason, rather than just stick with being a silly, good time.

It does not help that the plot really takes a big dive at this point either.  Instead of just remaining wacky, we have a mix of the “what did everyone learn” moments along with a rather bland finale that does not provide the film with much inventiveness.  Not that I really needed to see something truly ambitious in a comedy like this, but the film somehow managed to make its silliness more enjoyable earlier on, rather than in its last third, which is enough to take my opinions on it down a notch. 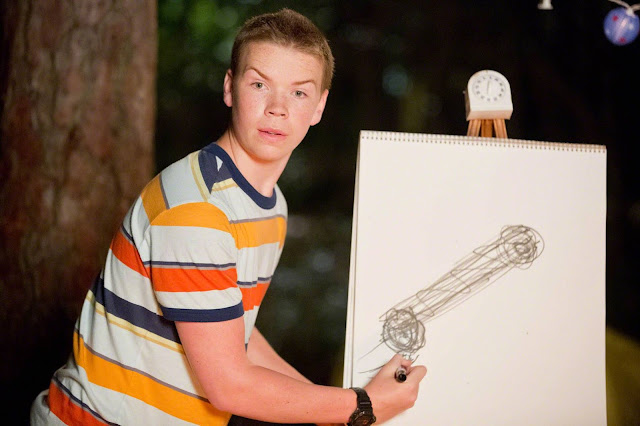 Putting its flaws aside, I had fun with the core cast.  Sudeikis has a charm about him that works for this drug dealer character.  Even though the film has him back off of what makes his character work best, as it nears its end, I enjoyed the way it built up his turn towards having a good enough time with his fake family.  He also shares fine chemistry with Jennifer Aniston’s Rose the stripper.  As Rose, Aniston is fine when it comes to trading one-liners and jumping into R-rated territory, but I also have to wonder what the self-esteem level is when an A-list talent, with nothing to prove in terms of beauty, still finds the need to show off her body.  Not that I really need to come down on scenes of Jennifer Aniston stripping (I mean really, sign me up, sure), especially when there is a crazy gay panic scene involving Luis Guzman of all people, but between Horrible Bosses and We’re The Millers, is Aniston getting back at someone for saying she’s not pretty or something?

Anyway, as far as the rest of the cast goes, Emma Roberts is fine as the runaway girl who essentially plays the straightest character of the group, more prone to commenting rather than really supplying humor of her own.  Will Poulter, on the other hand, is the broadest character, complete with a wide-eyed sincerity that makes him more prone to embarrassment.  While the film has us laugh at this character, something about Poulter’s actions just kept making me laugh.  Having Nick “Ron Swanson” Offerman and Kathryn Hahn is a nice tough as well, though one of these characters could be a little bit grating at times.  The less said about the supposed “villains” of this film, the better, but I will stick up for the actual Miller family, as their dynamic worked. 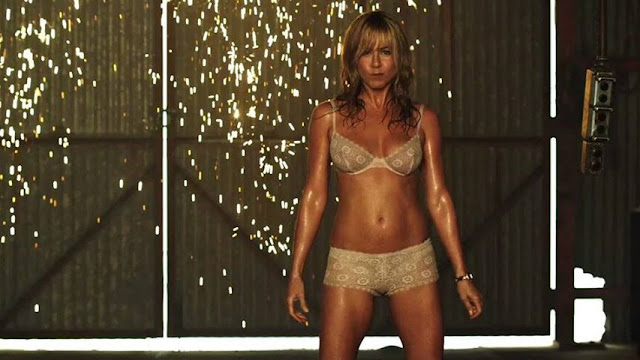 All of this still comes down to whether or not I laughed and I can basically say that I did.  We’re The Millers is not paving the way for a new breed of comedy and it does not pull through on its overall premise, but it works as disposable fun.  I like seeing Sudeikis taking on lead roles, as he is bound for more glory, following his exit from Saturday Night Live.  Aniston is also very happy to involve herself in this sort of film, which is a nice change in pace, compared to a lot of boring roles she has taken on in the past.  The amount of goofiness in the film overall makes it passable, even if it is a film I am mostly likely only to see again on TV at some point.  Regardless, the movie is not simply “getting a pass” because it doesn’t strive to be greater, because it made me smile.  Even the silliest of comedies, making me smile enough can go a long way.

[Two things to note: 1. This film is about an RV packed with marijuana, being driven by a drug dealer, but no one ever gets high in this movie.  2. Stick around during the credits, as I did enjoy the bloopers shown.]

David:  My “wife” isn’t even really my wife.  She’s just a cheap stripper! 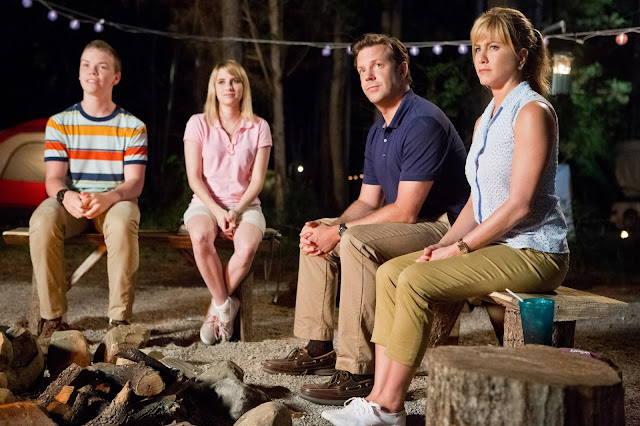 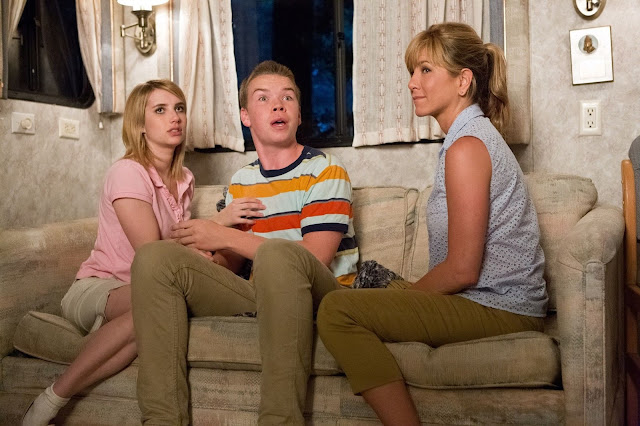