Make Sure To Seek Out The Hunt 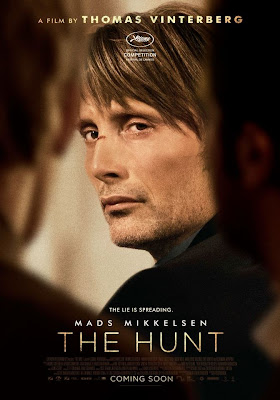 
[Note: I originally reviewed this film for WhySoBlu.com during the Newport Beach Film Festival, but I want to make sure even more people can read about it, so I've imported it over here.]

Lucas: What are you saying? Have you got something to say me?
Agnes: stop it, Lucas.
Lucas: you want to tell me something?
Theo: relax, Lucas
Lucas: the whole town is listening . tell me! what do you want to say?


Jagten (or The Hunt) is a Danish film, starring Mads Mikkelsen (currently seen on NBC’s Hannibal), who won the Best Actor award at the 2012 Cannes Film Festival for his work in this film as Lucas.  Here is the NBFF summary:  A disturbing depiction of how a lie becomes the truth when gossip, doubt, and malice are allowed to flourish.  Lucas is a highly-regarded school teacher who has been forced to start over having recently overcome a tough divorce.  However, his life is soon shattered when a hideous, untruthful accusation ignites a witch-hunt that threatens to destroy his life.  The lie is spreading quickly through the small community, and Lucas is forced to fight a lonely fight for his career, his family, and his dignity.


I have mainly seen Mikkelsen in roles that require him to either play a villain or some sort of character with darker intentions.  It is incredibly impressive that Mikkelsen is not only playing a good person, but makes you feel utterly sympathetic for him.  Given the issue that turns Lucas’ life into a living hell, it would be hard to not sympathize with anyone that were to be in the same situation, but to put credit where credit is due, Mikkelsen is fantastic in this film.  Every chance he is given to express some type of emotion, whether it is bewilderment to others in regards to his situation, love for his son, or justified frustration at what is transpiring, based on false accusation, Mikkelsen nails the way to play it.

The story itself is very hard to take in at points, given the way characters go about with their choices.  Things escalate to an out of control level very quickly, despite having originating elements that could have been cleared up in five minutes, were certain people not acting in an incredulous manner and handling the situation with more tact.  However, because of the wrong choices being made, nearly all of Lucas’ friends and acquaintances become callous and belligerent, leading me to become incredibly frustrated with the situations presented.

There are two films that came to mind as I watched The Hunt.  The first was a film I was only okay with, and that was 2011’s We Need To Talk About Kevin, which starred Tilda Swinton in a great performance.  Similar to that film, The Hunt had me so fed up at points, given what I knew to be true versus what others were refusing to comprehend, that I had a hard time not squirming in my seat at points.  I believe The Hunt succeeds over ‘Kevin’ for me, because, I guess, I was just happier knowing that something could presumably be done to solve the situation at hand, even if I have to wallow in a lot of drama, before reaching that point. 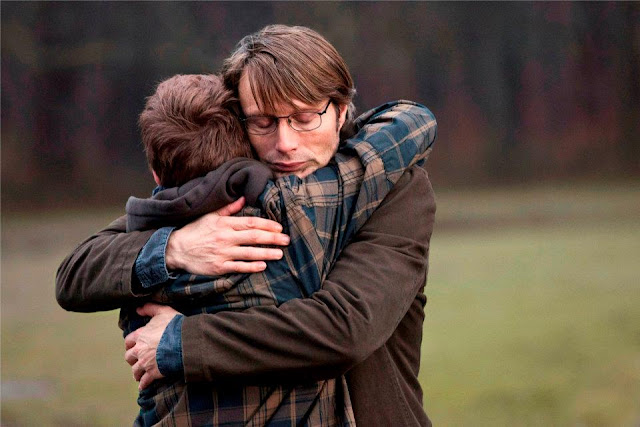 The other film that came to mind was the wonderful 2011 drama A Separation, which had a lot more in the way of presenting a moral grey area in regards to who was in the wrong for that story, but still presented a fascinating character study, with little in the way of anything else aside from strong acting and writing to really sell what is happening.  The Hunt is very similar in that regard and had me just as compelled, despite the seemingly little that was going on in scenes, aside from characters arguing.

Perhaps the argument can be made that The Hunt borders on misery porn, as we keep seeing things become darker and darker for a character who certainly does not deserve this kind of trouble in his life, but I was so compelled by where the story was going, which eventually led to an ultimate conclusion that was not as neat as it initially may have seemed.  It did not hurt that a bit of a break in the story was given about midway through, as the perspectives slightly shifted and other characters provided a bit of relief amidst the continual drama unfolding.  Regardless, I was already fine with the dark path we were going down, even if I was ready to yell at certain characters in this movie.

The Hunt is a fine piece of filmmaking.  With minimal score, imagery set around only a few locations, and a handful of main characters, director Thomas Vinterberg does a fantastic job with a well throughout story that is not the easiest to watch unfold.  Mikkelsen is fantastic in the lead role and does such a great job at keeping you invested just to see if he is able to come out of this whole ordeal in one piece.  For those in search of a good foreign drama, The Hunt is definitely a strong film to consider. 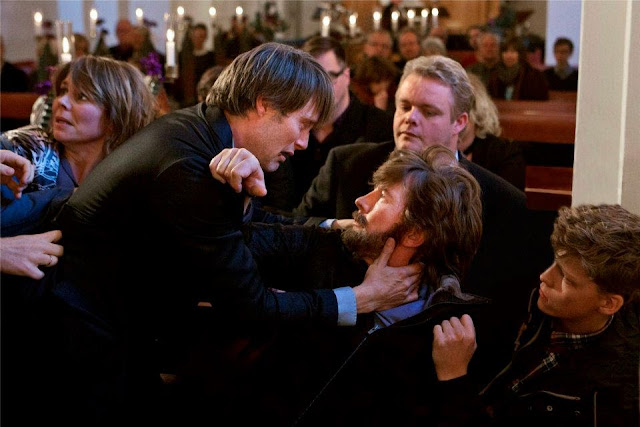 Aaron is a writer/reviewer for WhySoBlu.com.  Follow him on Twitter @AaronsPS3.
He also co-hosts a podcast, Out Now with Aaron and Abe, available via iTunes or at HHWLOD.com.
By Aaron Neuwirth
2013 Films Arthouse Cannes Film Festival Drama Foreign Films Mads Mikkelsen Newport Beach Film Festival
Reactions: