‘The Conjuring’ Is Rated R For Really Trying To Be Scary 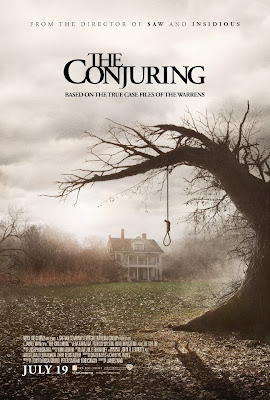 Carolyn Perron:  There's something horrible happening in my house.

As much good as The Conjuring has in it, I wish the marketing didn’t spoil the film’s key scene.  I am not going to delve to deep, but Lili Taylor (one of the unluckiest actresses, given that for such seemingly nice woman, she always seems to play emotionally or physically scarred characters) is involved in what is easily the film’s most accomplished horror set piece, based on the setup and payoff.  No, not everyone has necessarily seen the same marketing for the film, but the point I am getting at is that the film is effective enough, but does not do much to push the genre forward, nor does it have to.  The Conjuring is effective in merging 70s horror sensibilities with the vision of a modern day horror filmmaker.  There is not much more to glean from the film, but it looks good, will scare many, and is not obnoxiously dour. 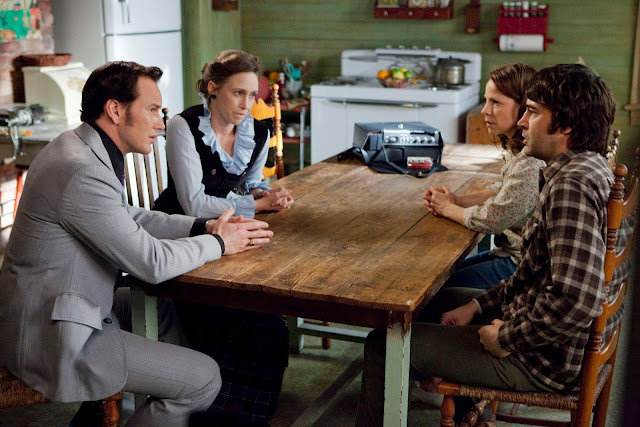 The Conjuring takes place in the 70s and stars Vera Farmiga and Patrick Wilson as real life paranormal investigators Ed and Lorraine Warren.  The two are brought in to investigate the spooky occurrences going on in the newly bought home of the Perron family.  Carolyn and Roger Perron (Lili Taylor and Ron Livingston), along with their five daughters, are having a lot of trouble adjusting to their new surroundings, as too many weird and terrifying things keep occurring.  Be it evil images, bumps in the night, or violent physical interaction, this house is infected and Ed and Lorraine are going to have to use their skills to find out the truth behind what happened at this house and hopefully keep the Perrons safe.

How about a positive and a negative to start this one off?  First the negative: despite pushing forward the notion that The Conjuring was rated R simply because “it was too scary,” I have to call BS on the reason of this rating, given what I know about the MPAA.  The film has its share of scares, but it is easy to see why, despite the lack of heavier violent content, this film still received a (light) R rating.  For the positive:  director James Wan continues to show his strength behind the camera, when it comes to horror filmmaking.  He has come a long way since Saw, but continues to work with modest budgets to make effective thrillers, thanks to his innovative use of the camera, well-earned jump scares, and realizing that breaking up the tension with humor makes for a more appealing film. 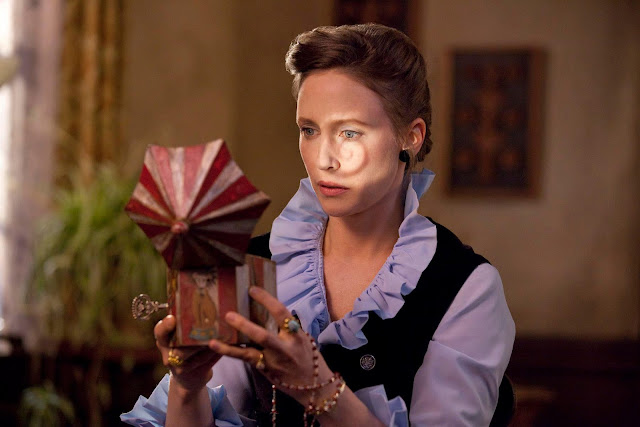 The direction (and the actors, which I’ll get to) really is the glue that holds this film together.  Given that The Conjuring almost feels like everything and the kitchen sink was thrown in, so viewers could be more terrified, it really helps that the filmmaking and acting are a big part of making it work.  James Wan continues to show off what he is able to accomplish by shooting digitally, as he and cinematographer John R. Leonetti play around a lot with perspective, camera angles, and the ever vexing Hitchcock zoom (the dolly zoom is excessive in this film).  All of this makes the case for The Conjuring definitely being a product of the 2010s, rather than a gritty 70s horror film, but that matters not, as the film is working on its own terms to establish a mood, rather than emulating the past.  It is a period horror film, with Wan doing what he can to make it his own.

I meant it with the ‘kitchen sink’ comment by the way, as Ed Warren literally shows us his room that contains every spooky item he has investigated, rivaling the basement in Cabin in the Woods.  It is one of the downsides to the film, in a way, as The Conjuring has two concurrent plots, which are both interesting, but drag the film in different directions.  The Warrens are interesting characters unto themselves and could have made for a whole separate horror movie.  At the same time, the Perron family has plenty for audiences to chew on, as they deal with all kinds of spooky late night house calls from within.  Yes, the film does come together, by intertwining these characters, but the remnants of both films are still hovering around, without going anywhere (See: Abigail, at least one Perron daughter, and the Warren’s daughter, Judy).  The film even goes to the length of establishing that Lorraine Warren is essentially being drained by her involvement with the paranormal, but this hardly goes anywhere. 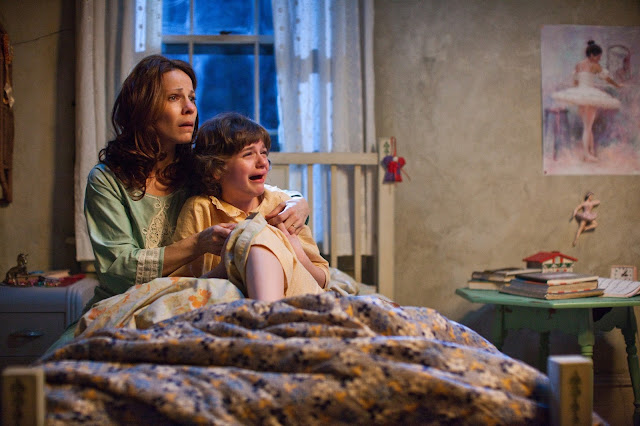 Thankfully, the adult cast is great.  Vera Farmiga and Patrick Wilson make for a fun combo and I would have easily sat through a procedural film all about them doing some ghost busting.  The fact that Wilson has few notes to play beyond well-studied about ghosts and worried for his wife, but still makes the character work has me looking forward to whatever he and Wan decide to do next (they have worked on this film and two Insidious films thus far).  Similarly, Farmiga gets a lot of mileage out of her role, which is the more interesting one, despite having limited time to really delve into it.  For the Perrons, Lili Taylor is very capable of playing vulnerable and she does so with ease here, before delivering a whole other side in the film’s third act.  And Ron Livingston is solid as always, playing husband and father, open to the idea of ghost occurrences.

Given that I can easily praise so many other qualities of this film, judging the actual scariness is where things can get tricky.  There are a number of horror genres being represented in this film and without spoiling too much, I will say that exorcism is one of them and for whatever reason, I just do not get very scared by that type of horror, regardless of how well-handled it is.  With that said, while the film is not reinventing the wheel for horror, it does a lot of proper setup for the scares that occur (the film is most effective, horror-wise, in its first half).  There is not a whole lot of cheap horror scares present and the pacing is just right, when dividing up individual scenes and how they go about unsettling the audience. 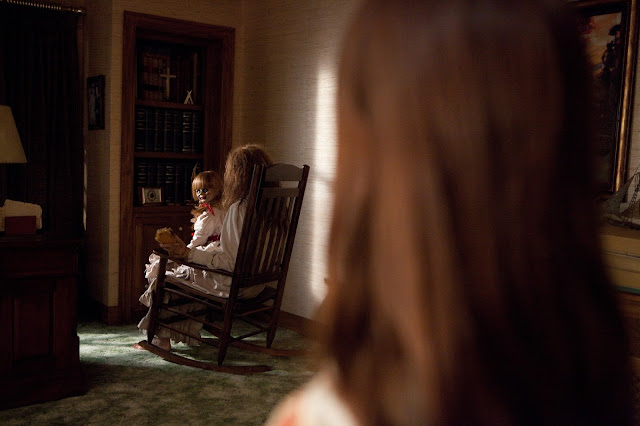 In an ideal situation, being away from pre-disclosed knowledge hyping this film up as “absolutely terrifying” could have made me more susceptible for the film to have won me over more.  As it stands, while The Conjuring is not the horror event of the year (I would recommend V/H/S 2 as far as summer horror goes), it is well made and well-acted enough to make it work.  The period film vibe adds another level that is welcome, as is the notion of having genuine comic relief in the film.  I continue to enjoy how far James Wan has come and can only hope his upcoming projects are at the very least this stylized. 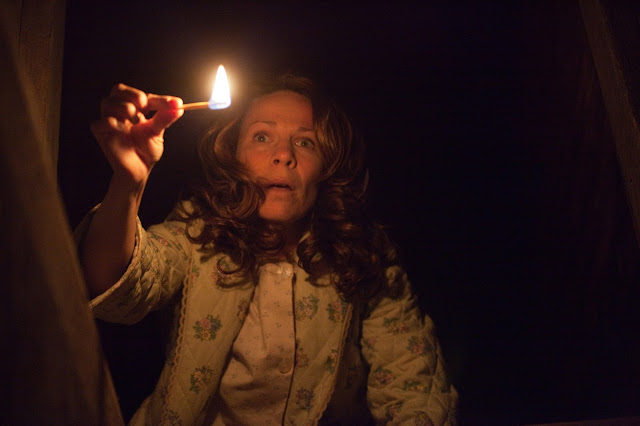 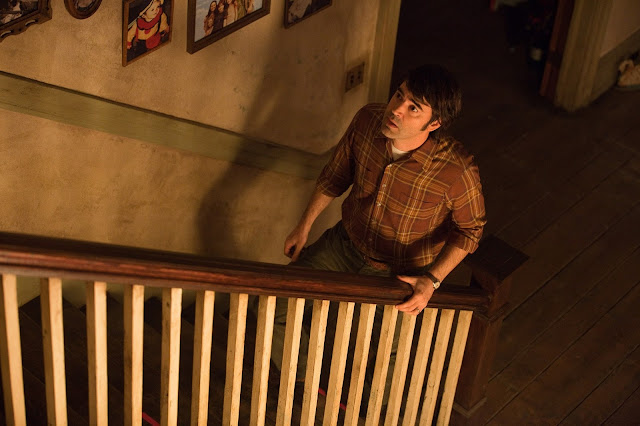 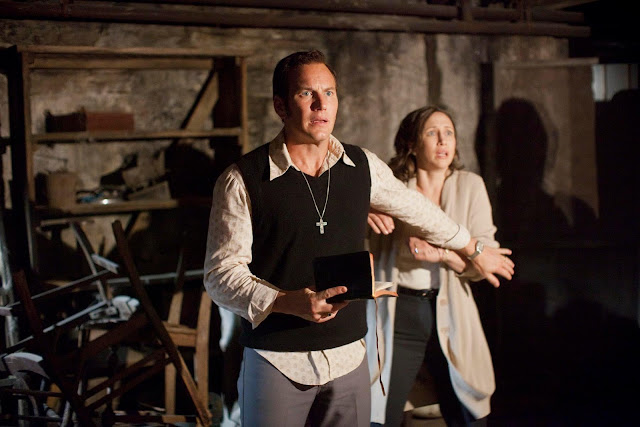 Aaron is a writer/reviewer for WhySoBlu.com.  Follow him on Twitter @AaronsPS3.
He also co-hosts a podcast, Out Now with Aaron and Abe, available via iTunes or at HHWLOD.com.
By Aaron Neuwirth
2013 Films Horror James Wan Lili Taylor Patrick Wilson Ron Livingston Thriller Vera Farmiga
Reactions: