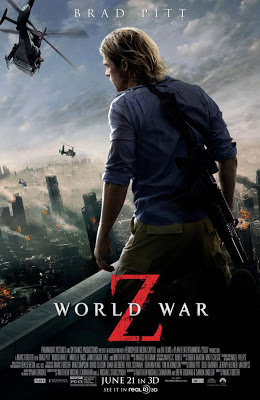 World War Z is a big surprise and in a very favorable way.  As a big fan of the gripping 2006 novel by Max Brooks (Son of Mel), everything I saw in the footage and news leading up to the release of the film adaptation indicated disaster.  It seemed that everything about the book, with the exception of the title, was scrapped in order to make for a summer action film.  That actually is what essentially happened in this film, but the surprising part is how enjoyable I found it to be.  While this film has little to offer in the way of social commentary or political undertones in the ways all the best zombies films do, it has plenty of thrills and real confidence in the way the action and mayhem is presented.  Despite all the production issues and a less satisfying third act, World War Z has far more confidence in its presentation than I expected and it plays as a solid piece of entertainment depicting a pandemic on a global scale. 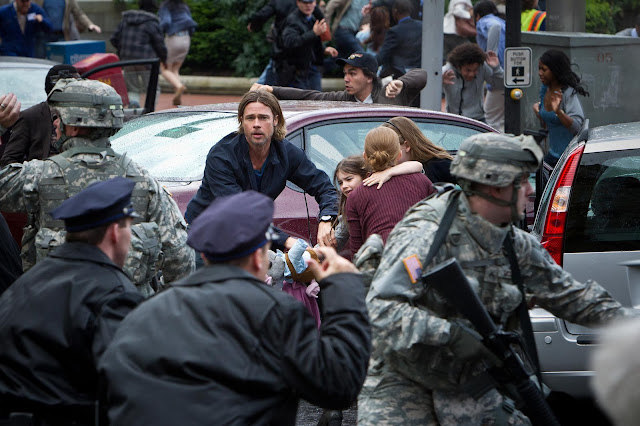 The film is quick to get things underway.  We are dropped into the life of Gerry Lane (Brad Pitt), a former UN Investigator, who gave up his job in order to be closer with his family.  Gerry has a wife, Karen (Mireille Enos), and two young daughters.  Watching the family sitting in traffic soon turns into panic, followed by pandemonium, as super-fast, super-deadly, and super-disturbed humans start attacking everyone in sight, biting people who they catch up to, leading to even more of people turning infected and doing the same.

Obviously those familiar with the book will be thrown off.  Max Brooks wrote a novel that served as an oral history of a fictional war against the undead; featuring a main character interviewing those involved after World War Z had ended.  This film is practically serving as a prequel to that story and given that it comes out the same week as Pixar’s Monsters University, its timing could not be better.  Regardless, the film sets itself up well by connecting us with Pitt and his family, only to sprinkle in elements of how the book’s broadest strokes have been grafted into this zombie-action-thriller. 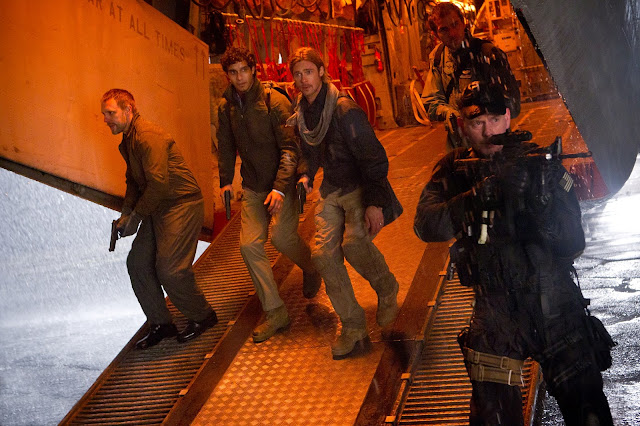 These elements are warped into how Gerry’s role in the story functions.  Once Gerry is able to get his family to safety aboard an aircraft carrier, he is tasked with going back to work, investigating various countries that may have answers in regards to where this virus/disease/whatever may have started, and what could possibly be the answer to stopping it.  Gerry first heads to South Korea, followed by Jerusalem, and eventually Wales, talking to various doctors and military men, gaining more and more knowledge in every location.  The groundwork done in these locations leads to the movie’s various action set pieces and they are all quite gripping on a visceral level.

Many complained about the sprinting zombies forming giant ant hills seen in the trailers, but regardless of how real or plausible it may be (Plausible? It’s a zombie film, I know), there is a sense of urgency and impact that is immediately clear in how these giant chase and mayhem scenes playout.  World War Z has a good handle on tension and thrills, establishing the rules of the zombie (as far as this film is concerned) rather quickly and having the audience use this information to easily realize how deadly the threat is if just one has entered the scenario, let alone thousands.  There have been many reports about this film’s expansive budget and while I would not necessarily go to the point of strongly commending the look of the film overall (zombie waves can only go so far before just being a mesh of CG), there are a number of really good visual effect-based scenes, solid make up effects, and enough effects work done in general to convey a massive zombie epidemic occurring, even in spite of its PG-13 rating. [Note:  this means little to me, but the 3D conversion was among the better ones I have seen.] 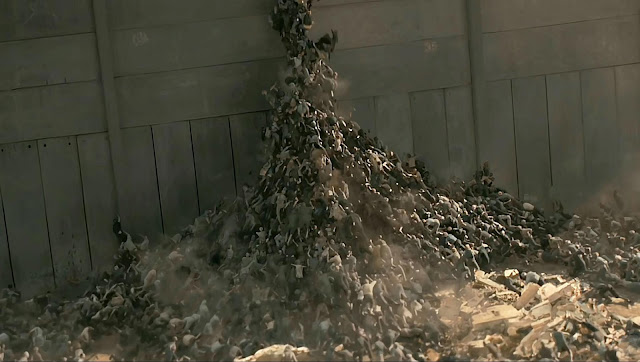 Director Marc Forster was joined by a bevy of writers (Matthew Michael Carnahan, Damon Lindelof, Drew Goddard, and J. Michael Stracynski) in an effort to put together the story and it is unfortunate that this movie is not a whole lot more than just an entertaining action film.  It is closer to Zack Snyder’s 2004 Dawn of the Dead remake, which was more of an action-horror film (and very enjoyable), than George Romero’s 1978 classic Dawn of the Dead, which had a lot more to say about consumerism and other social themes, while serving as an effective zombie film (my favorite zombie film).  Because of this, the ultimate downside is that there is nothing to really make this film last in any way.  It simply exists as a serious and thrilling depiction of a wide scale zombie apocalypse beginning, but is ultimately slight in the scheme of things.  There is certainly sequel potential, making me wonder if actually seeing a version of the book on screen is indeed possible at some point, but there really is not much else to serve as lasting dramatic weight for this story.

A lot of the weight in World War Z really falls onto the shoulders of its star, Brad Pitt.  Unsurprisingly for me, Pitt does a very good job in this film.  Stepping away from more obscure and smaller films (more than you think), Pitt is back in blockbuster territory (less than you think), but he is clearly trying to invest a lot of good sensibilities into the film.  Regardless of how far his role as a producer got him, as far as input into what the film should be like is concerned, for being a big-budget zombie apocalypse movie, the film allows time to focus on Gerry dealing with other characters, while constantly keeping the story moving.  There are even some solid little details that Gerry puts forward, such as how his cleverness and previous field work has given him an idea of how to handle the infected humans.  This aspect, the general concern Gerry has for others, and the controlled heroism on display are all elements played quite well by Pitt in a film that uses a movie star to its advantage. 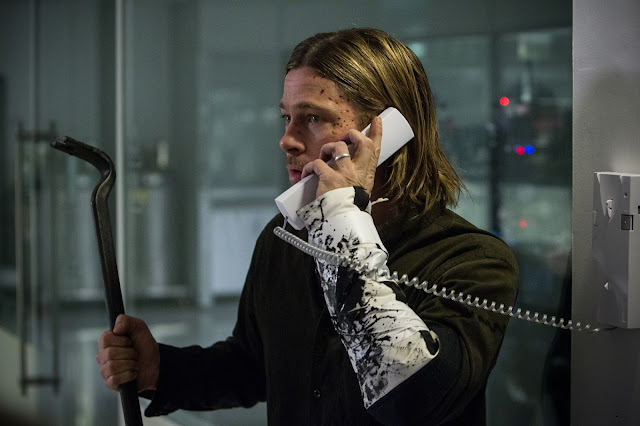 It is unfortunate that World War Z does not completely pull off being a straightforward action-thriller, with globetrotting as a bonus.  The third act of this film does take a shift that creates more of a generic route for the film to take in order to reach some sort of conclusion.  It is not necessarily bad, but a sense of geography and some character logic may be questionable and it is where the film’s publicized re-written script seems to be quite apparent.  Basically, the film shifts gears in an effort to find an endpoint, but it does so in a way that is less interesting than how everything had been playing out before it.

Issues aside, I was very happy to enjoy World War Z as the spectacle film it wants to be.  The film was able to make me put aside my qualms about the way it ditched the book’s original structure and themes and I would call that a win.  Brad Pitt is quite good in this film, which has a tense depiction of the world coming apart, based on a zombie epidemic, and that is by and large what general audiences want to see.  Fortunately, while the film may water down larger themes and only provide PG-13 zombie violence, it does not dumb itself down.   World War Z has enough confidence to play as a serious film with respectable movie logic and plenty of entertaining thrills.

Karen:  Is there anything left out there? 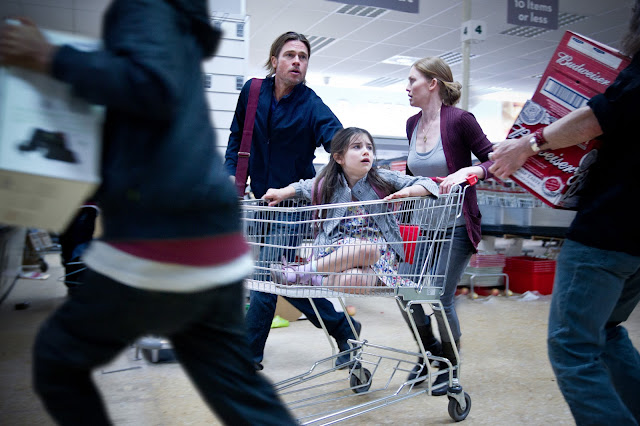 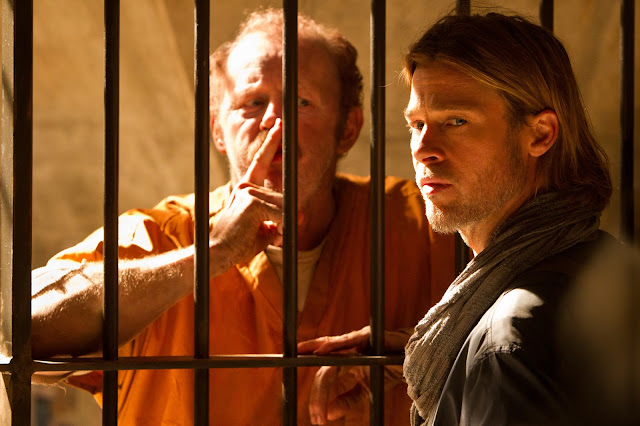