‘This Is The End’, Though The Laughter Doesn’t Stop 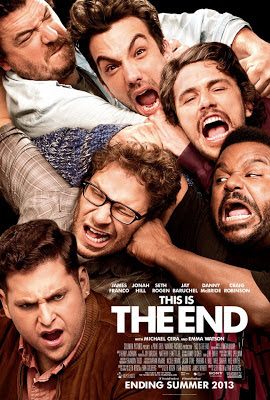 Craig Robinson:  We’re actors!  We pretend to be hard, but really, we’re soft as baby s**t!

The apocalypse has been quite a popular topic for film in recent years.  It has also been handled in various forms; from disaster drama (2012, Knowing), to the various zombie films (the upcoming World War Z), to romantic dramas (Seeking a Friend for the End of the World, a film I will continue to go to bat for).  Even the provocative, avant-garde filmmaker Lars von Trier took a stab at the end of the world with Melancholia.  So with the end of the world as such a popular subject for film, why not see it as a broad studio comedy?  This Is The End is a wild joke-fest about the world coming to an end, as well as something akin to The Avengers of comedies, given that it stars many comedic actors all playing versions of themselves in a weird sorta-pseudo-sequel to every Judd Apatow-produced comedy, even though he had nothing to do with this film.  Regardless, This Is The End is a hilarious, no-holds bar, star-filled extravaganza that manages to bury some interesting themes within its very bawdy self. 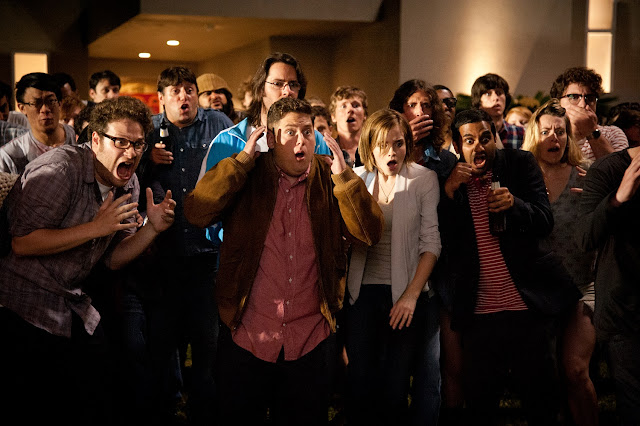 Seth Rogen and Jay Baruchel star as Seth Rogen and Jay Baruchel, best friends since they were young and living in Canada.  Seth now lives in Los Angeles, while Jay still lives in Canada, as he is not a fan of the LA lifestyle, but has come to Tinseltown to visit his best friend.  The two spend a day together, but Seth then proposes going to James Franco’s housewarming party.  Jay is reluctant, as he is not as friendly with people like Franco, Michael Cera, or his nemesis Jonah Hill, but he goes along anyway.  After spending some time at the party, things becomes exponentially worse, as mass chaos begins to overtake the city.  A giant sinkhole forms outside of Franco’s house, leading to the deaths of many of Franco’s celeb pals, and leaving Seth, Jay, Franco, Jonah Hill, Craig Robinson, and eventually Danny McBride to bunker down for safety in Franco’s house.  The film then becomes a test of friendship and survival, as the guys are forced to live with one another in the midst of an apocalypse, with a limited amount of supplies.  Needless to say, cabin fever gets the best of them.

At its core, this is a movie about friendship.  This is pushed to an extreme in This Is The End, but there is a very real story here about two guys who have grown apart over the years, based on how success and celebrity culture has changed them.  It would not be surprising to learn how close to home this may hit for the characters as well, given how Seth Rogen is a more well-known name, while Jay Baruchel may not roll off the tongue as easily (though he has certainly starred in many big films in his own right).  Watching these two interact and address the issues of how they view their relationship makes for a solid basis for the story, which works well in providing this film with a heart.  Putting that aside though, This Is The End is full everything you would expect to see in an R-rated comedy that also features Franco, Hill, McBride, and more. 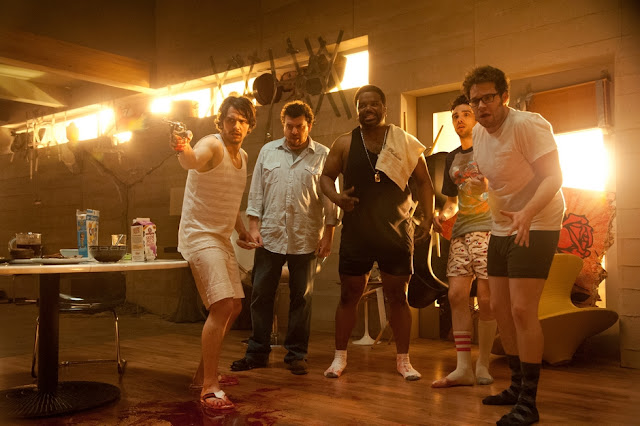 A large concern for a film like this is how could we accept these guys all playing a variation of themselves.  If this film had backfired, it would be because it’s a wacky, self-indulgent mess of nothing but these guys mugging and trying to outdo each other, with jokes far too inside for the mainstream audience to enjoy.  Very fortunately, writers and first-time directors Seth Rogen and Evan Goldberg have guided This Is The End into the exact direction it needed to travel in order to work as a huge success both in terms of hilarious mainstream comedy and one that benefits those looking for a little more underneath the surface.  The film certainly has a lot of elements that evoke a hangout atmosphere, sometimes having the film feel too loosely scripted and more like a series of sketches put together, but the overall hilarity more than makes up for it.

Danny McBride:  Seth, that's a better performance than you've given in your last six movies. Where the f**k was that in Green Hornet, huh?!

Allowing these guys to star as themselves opens up the film to be very self-deprecating, which is wonderful to watch, as the insult battles escalate to really funny tradeoffs of one-liners.  This is particularly true of Danny McBride, who enters the film a little later, but becomes the main instigator of a lot of arguments within the group.  Personally, I find McBride to be utterly hilarious and the fact that he is the only character who is not redeeming in any way makes him the perfect tool of destruction that this film can get away with, in order to keep up on board with everyone else in the film to an extent.  Arguably Jonah Hill too, in regards to characters with little redeeming value, as the heightened version of himself is practically akin to a real life Cartman who doesn’t know any better. 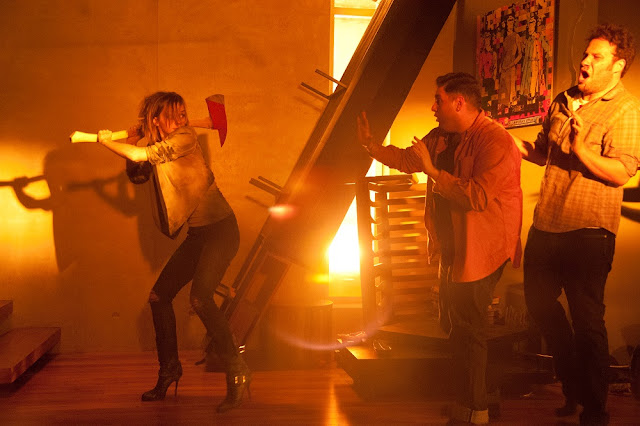 Everyone is clearly having a ball in this film.  I really enjoyed Franco’s portrayal of himself as a guy who is this extravagant artist, living large, with little in the way of self-awareness.  He additionally has maybe the best scene in the film, which involves an argument with McBride that goes on far longer than it needs to, but doesn’t stop being hilarious.  Craig Robinson and Seth Rogen handle the situations with the right amount of exasperated wit to stay in the moment, yet remain funny, while Jay Baruchel is the closest thing we have to a straight man character.  There are some little turns that really work, which is an excuse to get to talking about Michael Cera.  Cera is fantastic as a coked-out version of himself, with nothing but great one-liners, even after he is impaled by a streetlamp.

Have I mentioned that this is a film about the apocalypse?  It very much is and the film does not forget that.  While This Is The End offers a nice slice of Hollywood satire and some meta-commentary about celebrity culture and the movies these celebs are in, the end of the world aspect only increases in scale as the film goes on.  As wild as it is to watch Aziz Ansari lose an arm, before plummeting to his death in a lava-filled sinkhole at the end of the film’s first act, there are some true crazy things in store for the audience, as it arrives at its third act.  What remains true is the dramatic weight that is cleverly laced in and does not stop being a factor within the film.  While the ending is more of an extended epilogue that slightly undercuts the film (despite my enjoyment from a ‘haha’ sense), This Is The End manages to earn its sentimental aspect, while having a nasty good time getting there. 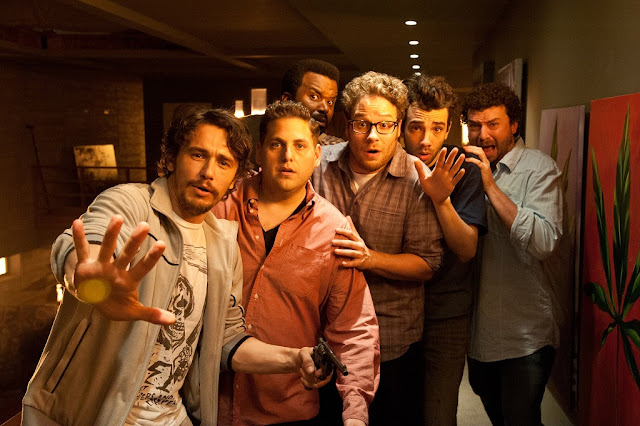 It always feels like a good sign to me when I have gotten to the end of writing a review and really have the desire to go and see the film again.  This Is The End was a full-on display of hilarity and insanity.  It is layered with relentless jokes, which has easily established a reason for me to head back for another trip to see it.  The film is also not without its central themes and even some specific definitive stances regarding faith that allow a level of darkness to shroud the film’s humor, only to make it a bit more interesting.  The film is not without its share of misses at points, few films can sustain non-stop comedy without a few jokes falling flat, but the fact is that I laughed really hard at this film and easily see it as the big studio comedy to beat this year.

Danny McBride:  For all we know the Lakers just won and that’s why all of this is happening. 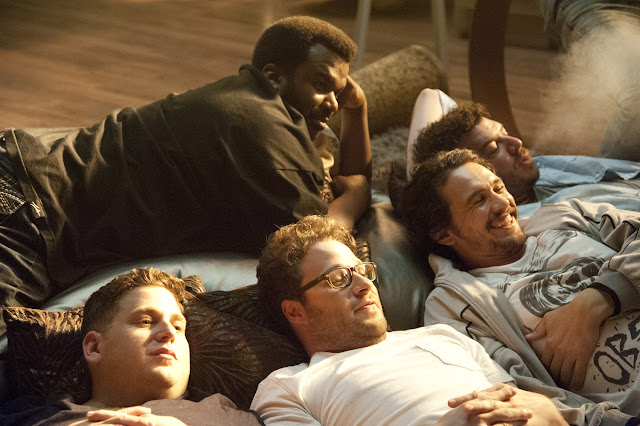 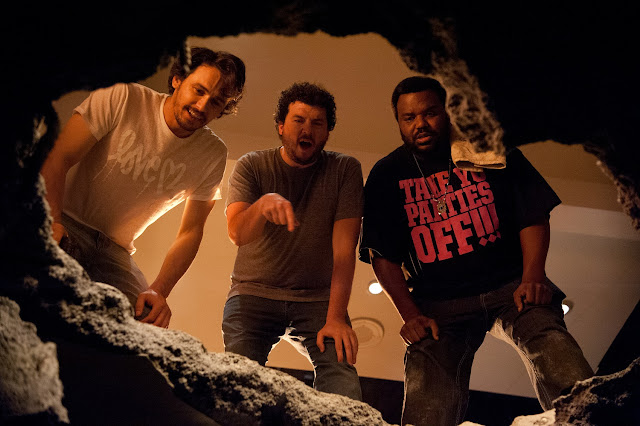 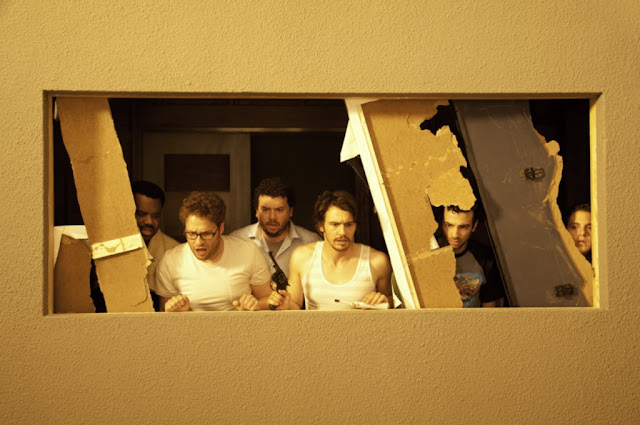