‘The Purge’ Left Me Feeling Empty 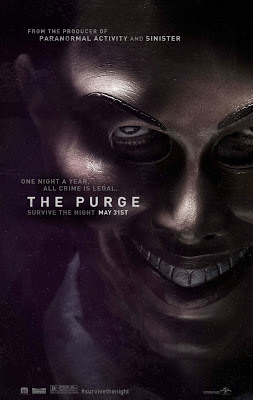 The Purge is a good example of an interesting premise being overtaken by idiotic characters.  Here’s a thriller that has a killer setup:  all crime is legal for 12 hours a year.  Even if the film is limited in scope and budget, there are a lot of places one could take this idea and find ways to hit upon social commentary in a violent but exciting sort of way.  Unfortunately, The Purge never really delivers on being anything more than a basic home invasion thriller that is not very thrilling.  It wastes away its potential originality by having every character behave in remarkably dumb fashion and squanders the chance to play up its 1%-ers-on-a-rampage angle in a way that is anything more than just an excuse for violence.  I can enjoy a good thriller, but The Purge misses out on capitalizing on a concept of capitalists committing crime. 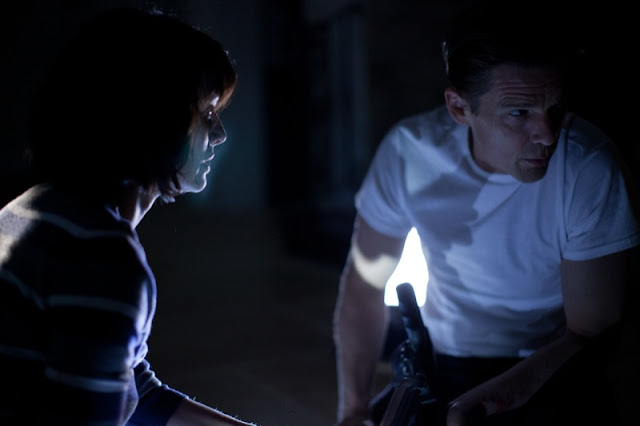 The plot is laid out pretty quickly, with Ethan Hawke’s characters supplying the details for all of us via family dinner discussions.  Hawke stars as James Sandin, a husband and father two to a teenage daughter and a younger son.  James has made a fortune in selling security equipment to protect people from an event known as ‘The Purge’.  The film is set in 2022, which has found America in better shape than ever, as the government has sanctioned an annual 12-hour period where all criminal activity is legal.  Known as The Purge, this concept has apparently made America something of a utopian-like society, with unemployment at an all-time low and society able to function peacefully, knowing that they have a period to release their primal urges once a year.  While James and his family are locked safely inside their house during The Purge, things become incredibly more complicated once a group of strangers come knocking at the Sandin’s door for reasons setup prior.  This now forces James, his wife Mary (Lena Headey), and his children to deal with how to handle their role in this year’s Purge.  Morning cannot come soon enough for them.

An issue I found right away with The Purge is how tame the film feels.  I am not sure if it is because the film is backed by Universal as opposed to a smaller studio with closer ties to producing gritty horror films, but a lot more speculation has been made about the premise, as opposed to what is actually going on in this film.  While the idea of ALL crime being legal opens some doors to really crazy thoughts, the film is only interested in showing a moderately violent side of this.  Did I need to see true pandemonium, thanks to the freedom that this setup provides?  No, but whether or not this was initially how writer/director James DeMonaco, the film lacks a lot of spark, when it comes to creatively presenting this concept and better tackling the socio-political intrigue that it creates.

Provided instead is a fairly standard home invasion thriller, with a decent enough middle section, thanks to what some of the actors are bringing to the film, despite my massive frustration involving the actions of certain characters.  Ethan Hawke is good here.  In a film that is a mix of The Strangers and Straw Dogs, Hawke is solid as the man driven to keep his family safe and challenged by some grey areas that The Purge successfully presents in the heat of the moment.  Headey is fine as well, even if her role as Cersei Lannister on HBO’s Game of Thrones has not led me to believe in her vying for a mother-of-the-year award.  As the head of the murderous strangers, Rhys Wakefield really enjoys the hammier aspects of the script, as he delights in the shit-eating grin he takes on, while threatening James and his family.

Unfortunately, while the middle act does its best to make the limited use of the film’s premise work, certain events that happen around it are harder to swallow.  Even if the film wants me to think that a child does not know any better, this movie really made me want to start swearing loudly at a child to better vent my frustration over annoying actions that occur.  The problem is that these actions occur because the plot needs them to, rather than have various beats work in a more integral fashion.  For all the decent setup the film does with its premise, it is these other big issues that really hurt my enjoyment of the film overall, especially as I already have to accept the core concept of something like The Purge being brought into existence.

As far as the filmmaking is concerned, The Purge has some highlights.  Some of the imagery is evocative enough and for or pure white knuckle entertainment, a few thriller/action beats work well.  The movie was produced by Michael Bay’s Platinum Dunes studio, which has given audiences the stylish, but empty horror remakes such as Texas Chainsaw Massacre and Friday the 13th, and Jason Blum, who is responsible for the Paranormal Activity films.  The Purge is not particularly stylish, but it is the kind of small thriller that can easily turn a profit.  Given that the audience was (confusingly) clapping all over the place (“violence, yeah!” “bad guy dead, yeah!” “good guy dead, yeah!?”), the appeal factor is certainly present, but that still doesn’t redeem the movie for missing its marks.

Ultimately, The Purge is another bland thriller with little to make it standout.  Ethan Hawke does a good enough job with his role and there are some interesting ideas buried within a sea of bad decisions.  Still, the film is lacking in much else to really recommend.  Frustrating character actions never really help in scenarios like this, as the movie plays too serious to not have me be able to look past the contrived moments that could have completely altered the direction of the story.  The Purge has the foundation of a neat idea, which could have been taken to different extremes, but it left me with nothing that positive to say.

Mary:  Just remember all the good the purge does. 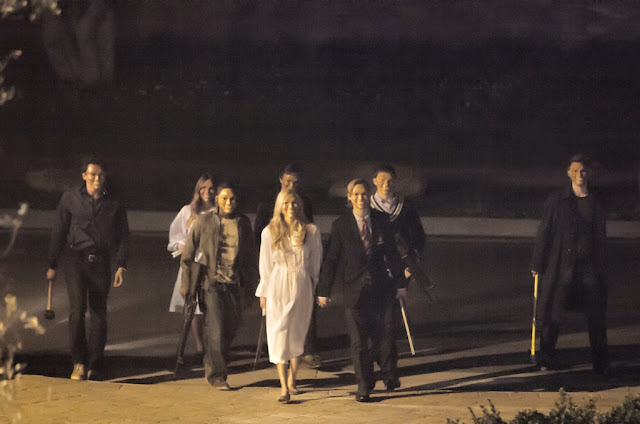 Aaron is a writer/reviewer for WhySoBlu.com.  Follow him on Twitter @AaronsPS3.
He also co-hosts a podcast, Out Now with Aaron and Abe, available via iTunes or at HHWLOD.com.
By Aaron Neuwirth
2013 Films Ethan Hawke Horror James DeMonaco Lena Headey Rhys Wakefield Thriller
Reactions: