‘The Internship’ Should Or Could Lead To A Full-Time Comedy 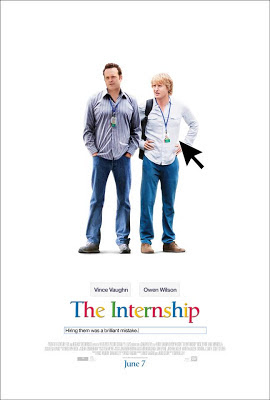 Nick:  We’re looking at some kind of mental Hunger Games against a bunch of geniuses for just a handful of jobs.

One would have thought that following the box office success of Wedding Crashers, Vince Vaughn and Owen Wilson would have teamed up again sooner in an effort to ride on top of that momentum.  Especially given that instead of doing a redundant sequel to a film, they have instead come up with a new premise that has some relevance to society today, even if setting the base at Google feels kind of dated, let alone an excuse to promote Google as the greatest thing their ever was.  The Internship is a new comedy from Vaughn and Wilson, but only time will tell (or at least the box office totals this upcoming weekend) whether or not audiences are still looking forward to seeing this duo play around in films together.  Of course, whether or not the film is a solid comedy will also factor in and I can at least say that I had a good time overall, despite various issues.  Maybe jumping into the premise of this movie about new beginnings will reveal more. 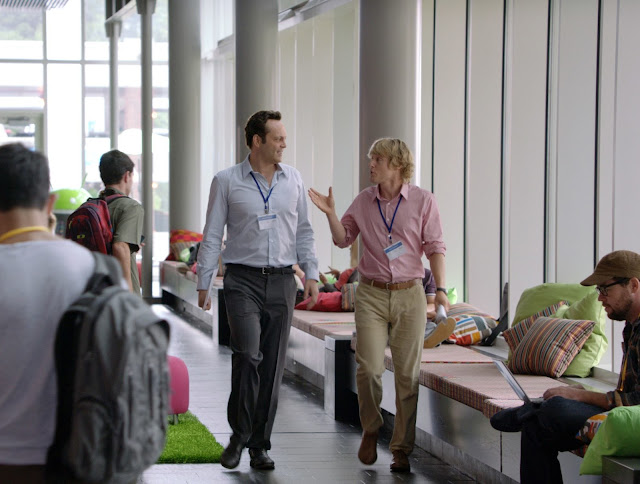 The Internship stars Vince Vaughn and Owen Wilson as Billy and Nick, two professional salesmen who have recently lost their jobs, after the company they worked for folded.  With few other options, Billy comes up with a plan – get jobs at Google.  Despite being behind the times when it comes to technology, the two apply for internships at Google headquarters.  Despite being much older than the average intern, the two seek out the opportunity with a lot of enthusiasm and join up with a team of misfits, who can only hope to gain full-time jobs by the end of the summer.  Of course, Billy and Nick may be in over their heads, but they also know how to talk themselves out of many situations.  Is that enough for Google?

Some people are calling this Wedding Crashers 2, which would be a bit of a misnomer.  While Vaughn and Wilson are not dislikable characters in Wedding Crashers, the setup does revolve around the idea that they are conning their way into sleeping with women.  The Internship is different, as far as these two guys are concerned.  Vaughn and Wilson as Billy and Nick are really nice guys.  They are in a bad situation, looking to find a new direction to go to in their lives, and are eager to work for it.  Billy and Nick are obviously underqualified to work at Google, given how it requires them to be familiar with today’s technology, but they have an eagerness to do their best.  This is best reflected in how they are never mean and use their positive persona’s to bounce off each other, hopefully reflecting their warmth onto their team.  The familiar chemistry between Vaughn and Wilson is there, yes, but these are guys with a different agenda.  Instead of an R-rated raunchy comedy, this is a much tamer underdog story. 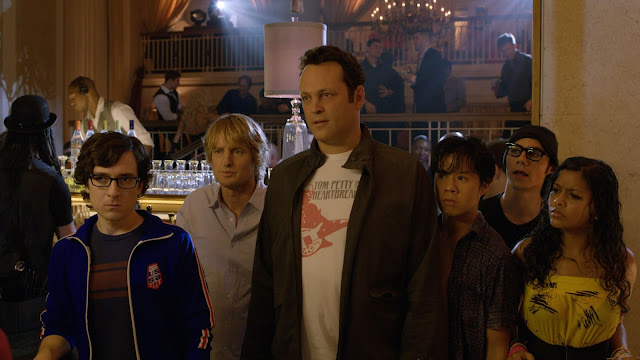 Now putting that aside, The Internship is merely an average comedy with a few big laughs overall, but ends up feeling too long and not fresh enough to make it a comedy that I will really want to revisit (unlike Wedding Crashers, which seem to hit at the right time, as I still laugh a lot at that film…though that film is also too long).  For those who are tired of that ‘Vince Vaughn character’ and that ‘Owen Wilson character’, this movie really will not do anything for you, as they may be nice guys, but their a mix of enthusiasm and abrasiveness that carries them through their films together is very much in full force here.  Those who do like these guys, however, will at least smile and at most really laugh out loud at some of the rapid-fire jokes they come out with.  I would find it hard not to get some laughs out of this if one is a fan of these guys, but that still doesn’t mean the movie is all there in its execution.

The Internship really does not do anything new for comedy.  It follows a very formulaic plot and hits a number of very familiar beats, before wrapping everything up with a bow at the end.  This is not inherently bad, but the movie needed to either be funnier or shorter in order for me to enjoy it more and it unfortunately misses the mark on both of these points.  Instead, we have a film that is decently funny in spots, with some big laughs, but it is also hampered by its need to really stretch itself thin for the sake of a few extra jokes.  There are several extended scenes that hit their points early on, but continue to play out anyway, so everyone can riff for another couple minutes.  It is a similar issue with Judd Apatow-produced films, where a cast may have fun showing off their chemistry, but the padding could be better served on the unrated Blu-ray and in deleted scenes, rather than a theatrical cut of a film that feels shaggy. 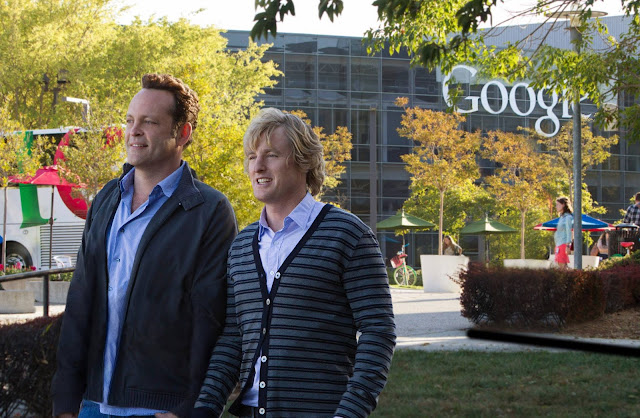 The film is not without its merits.  While I do find Vaughn and Wilson to be solid comedic actors, there were several members of this cast that I enjoyed as well.  Max Minghella’s incredibly over-the-top performance as the jock of the Google interns kept making me chuckle in the same way that I tend to find most over-the-top bullies in these sort of movies, since they tend to be called out on it by the characters in the film, just as how I do in my seat.  Scenes of Aasif Mandvi as the head instructor of the Google internship program were also satisfying, as he constantly spars with the other guys in humorous fashion.  The other interns have their moments as well, though the film wants you to be more satisfied with their overall teamwork, rather than them as separate characters.  Again, it’s a pretty standard film that plays everything too safe to ever have it rise above its material.

Could I spend more time talking about how Google factors in to all of this?  Sure, but what would that prove?  If you know about The Internship already, you have already made up your mind on whether or not a movie with a very specific sponsor featured heavily will rub you the wrong way.  I have judged the film on my terms, which is how I like to do things anyway, and as a comedy it is decent.  I am not walking away with any specific jokes coming to mind, but I also did not have a bad time watching it.  Vaughn and Wilson are a fun duo and that continues to show in this film.  The premise is nothing very innovative, but it’s a harmless summer film that may elicit a smile or more from those who really want to check it out.

Billy:  It’s not so much getting out of the blender…it’s what happens next.  That’s the question. 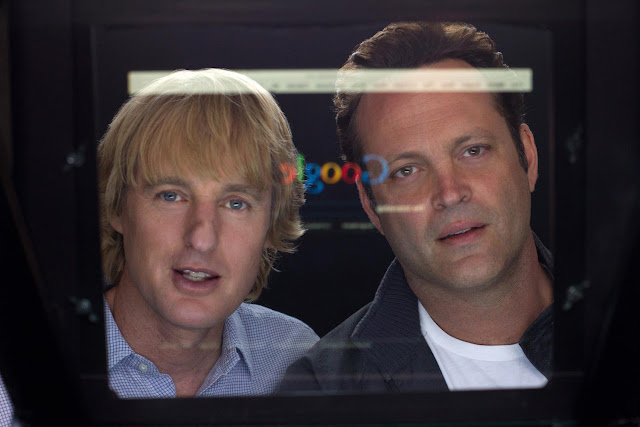 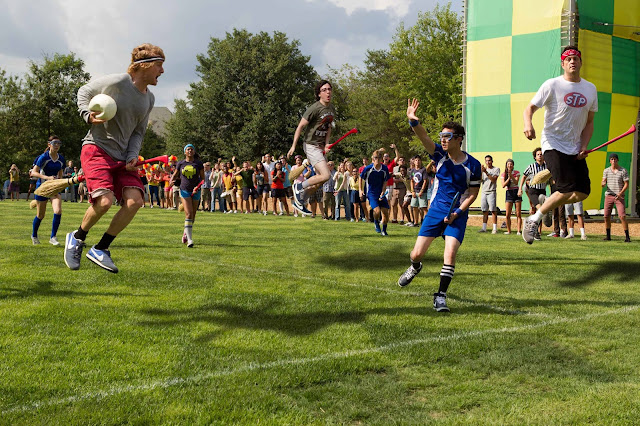 Aaron is a writer/reviewer for WhySoBlu.com.  Follow him on Twitter @AaronsPS3.
He also co-hosts a podcast, Out Now with Aaron and Abe, available via iTunes or at HHWLOD.com.
By Aaron Neuwirth
2013 Films Aasif Mandvi Buddy Comedy Comedy Max Minghella Owen Wilson Shawn Levy Vince Vaughn
Reactions: