‘Monsters University’ Is A Fun Trip Back To School 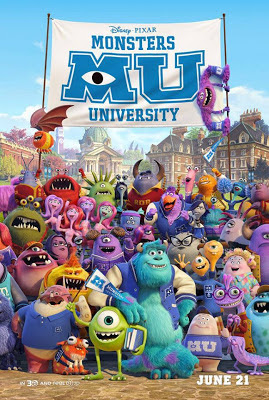 Mike Wazowski:  Just wait hotshot, I am going to scare circles around you this year.

I wonder how many of my reviews for Pixar films begin with how I approach their studio with a lot of faith, given their track record.  The notion to mention favorites from the beloved animation studio is also a tendency.  It really should not matter and maybe in another 5-10 years, they will be just another studio that does not need to be called out for their past films.  With all of that in mind, regardless of whatever Pixar has done in the past and how their newer films stack up, I can that I had a lot of fun with Monsters University, the prequel to 2001’s Monsters, Inc.  It is a funny, bright, and colorful underdog story that relies on a lot of good-natured humor to make up for its traditional plotting.  The emotional resonance is there, as per usual with Pixar, but the film is about as affecting as it needs to be, for a film that sets out to simply be a fun, all-ages comedy. 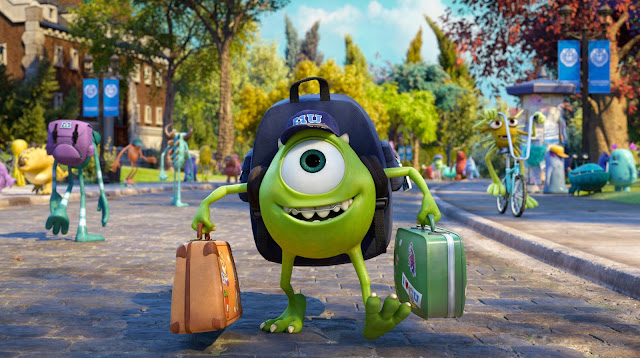 Following a brief prologue to set up this film’s main character, Monsters University really begins about 10 years before the events of Monsters, Inc., meaning that power for the world of monsters is coming from the screams of innocent children.  Of course, that is just in the background, as our focus is now placed on a young monster who wants to be the best scarer of all time.  This is Mike Wazowski (Billy Crystal), a one-eyed, small green monster with a wide-eyed take on the idea of attending Monsters University and learning to become the best in the business.

Right away, the movie shows us that this is going to be the Mike Wazowski story.  While the fluffy, polka-dotted, and ferocious (when called for) Sully (John Goodman) was the main character in Monsters, Inc., with Mike acting more as the sidekick, the roles have reversed this time around, as Mike’s arc is the focus.  Given the nature of this story, it makes a whole lot of sense.  Mike is constantly battling against the ridicule of others, given his small stature and inability to be regarded as scary.  This leads to a setup that would make fans of Revenge of the Nerds proud, as Mike is eventually forced to join with the least cool frat in all of Monsters University, Oozma Kappa, in order to compete in the Scare Games and maintain his enrollment at MU. 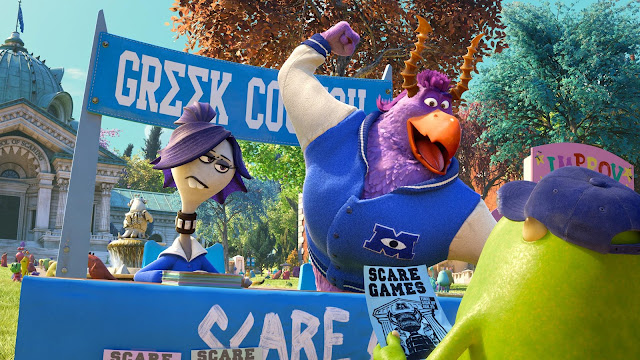 Yes, Monsters University is taking on the familiar story of the geeks battling against the jocks for supremacy.  There are montages, big dances, school pranks, a scary dean (Hardscrabble, voiced by Helen Mirren), unlikely victories, team bonding, and life lessons learned.  The Pixar-ness is also quite familiar.  There are fun characters with appropriate voice casting, lots of creativity on display in regards to the wonderful animation, a balance of humor that skews to both younger and older audience members, an emotional core, and even a score by Randy Newman (making it his seventh Pixar collaboration).  Does this all add up to another Pixar classic?  Not really, but the film sure is a lot of fun.

Given that the original film is one that I only think of as good, as opposed to great, it is easy enough for me to say that Monsters University is on pretty much the same level.  The standout difference is the lack of Boo.  In a nutshell, Boo was the crucial factor that elevated Monsters, Inc. to another level, as far as how I can logically argue why many love it more than I do.  Even with my feelings of the film being pretty good, Monsters, Inc. has perhaps the best ending of any Pixar film (a topic I would love to discuss in the comments section).  Because of this, Monsters University is basically trapped, by default, to be second best in the series, unless it truly had something great under its sleeves in regards to its emotional core.  Somewhat unfortunately, it doesn’t.  While I am glad it didn’t try to outdo its predecessor by going sadder or being more earnest (arguable), I am also happy as just seeing this as a fun palette cleanser for Pixar, in between their  more original projects (we just had Brave and up next is a story about Dinosaurs!). 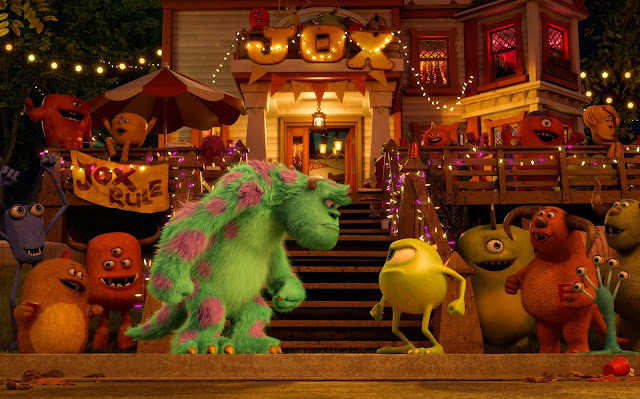 The first film was more of a screwball comedy, with the wonderful decision to have Billy Crystal and John Goodman record in the sound booth together and have the film play off of their energy.  This film takes similar steps, while altering the formula by having them initially be enemies.  It makes sense to me that Mike is an overachiever, while Sully came to college riding in on his scary looks and family name.  Having them butt heads because of this was a fun choice, as well as forcing them to be together, in order to show how the dynamic formed.  It leads to fun ways to call back to the first film, while standing on its own.

Plenty of new characters are established this time as well, in a world that is expanded quite a bit, given both the new locations and improvements in technology in the past 12 years, allowing the film to have monsters everywhere.  Along with Crystal, Goodman, and Steve Buscemi (returning as Randall), there is also Alfred Molina, Nathan Fillion, Dave Foley, Sean Hayes, Charlie Day, and Bonnie Hunt, among others.  My favorite though is easily Joel Murray as Don Carlton, a middle aged student who had to go back to College to get a new degree, after his previous job fell through due to the economy.  It’s the kind of humor that I love in just establishing a character like this, and his optimistic disposition is so welcome. 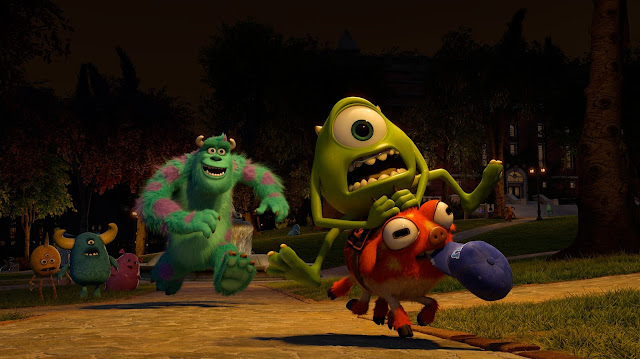 Optimism is key for me with Pixar films these days.  Given that we are now in a time when every new Pixar film is being judged against all of their past work, I simply want to be entertained, just as I would with any film, especially family-friendly animated ones.  Monsters University accomplished that and then some.  I enjoyed it a lot, found there to be a lot of creativity on display, in the midst of an old-fashioned underdog story, and was delighted by how the comedy balanced with the character growth.  Motivations be damned, regardless of whether or not I needed a prequel story for Monsters, Inc., I was happy to dig a little more into this world and find some college-level fun in Monsters University; appropriate for youngsters of course.

[Note: This year’s Pixar short is titled The Blue Umbrella.  It is a cute little short film with some wonderful animation that mixes photorealism with cartoony sensibilities.  You can’t avoid it if you see Monsters University, but I am happy to call it out as a fun opening.] 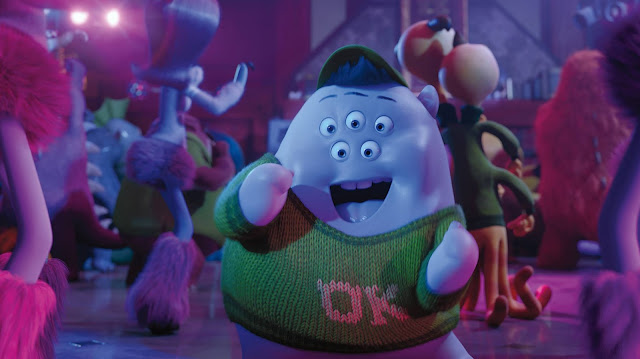 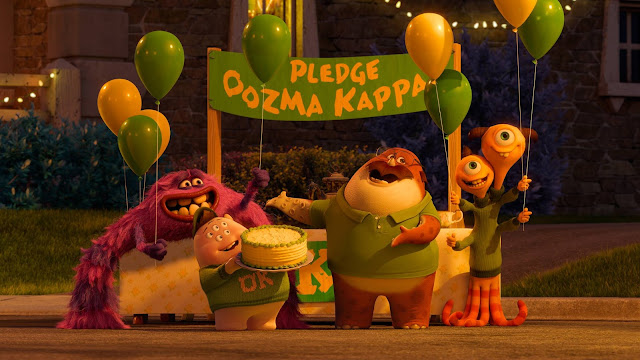 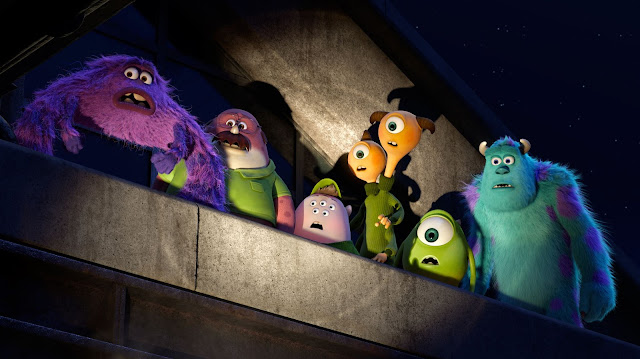