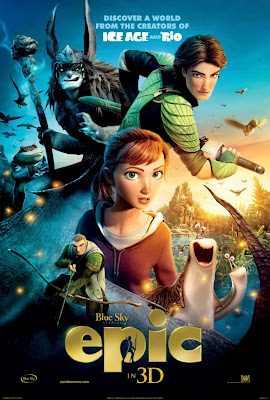 Mary Katherine: My dad always told me stories about a hidden world. Where brave warriors watch over and protect us.

Given how 2013’s Memorial Day weekend is packed with action and comedy for adults with both Fast & Furiou6 and The Hangover Part III hitting screens everywhere, it is only right to have some counter-programming for kids and family audiences.  I only wish that the film Epic lived up to its title.  As it stands, Epic is perfectly acceptable as a fairly unchallenging film, with some wonderful animation, rousing action sequences, and humor, I just wish it had more to offer.   The film feels like a friendly, but action-heavy take on The Borrowers crossed with FernGully: The Last Rainforest.  It flirts with a few interesting ideas, but overall, Epic is merely an average and fairly traditional animated feature.

The film finds a teenage girl, Mary Katherine (M.K., voiced by Amanda Seyfried), being shrunken down and transported into a forest world, where good guys battle evil.  These good guys seem to be in favor of protecting the forest, specifically a group of tiny warriors known as Leaf Men, which includes veteran warrior Ronin (Colin Farrell) and skilled rookie Nod (Josh Hutcherson).  The bad guys, known as Boggans and led by Mandrake (Christoph Waltz), seem to be all about destruction.  M.K. is caught up in all of this, after Queen Tara (Beyonce Knowles) passes on to her at item that will help protect the forest.  Now she must team up with the Leaf Men, a slug (Aziz Ansari), and a snail (Chris O’Dowd), in order to hopefully keep the powers of evil from taking over.

The early promotion of the movie reminded me a lot of Disney’s Dinosaur.  That film featured some great imagery and made a good case for generating general interest in seeing the film…until the dinosaurs started to talk.  Epic is not a disaster by any means and certainly not hindered by having an ensemble cast of actors, but when you go through a gorgeous forest and watch some dazzling adventure scenarios, with creatures you know nothing about, only to then deal with a wise-cracking slug, it begins to feel like many other films you’ve already seen.

Epic’s story is based on the book, “The Leaf Men and the Brave Good Bugs,” by William Joyce, who had also developed the original story for the recent DreamWorks animated film, Rise of the Guardians.  I am not sure if I am doing something wrong, but Joyce’s work being turned into films is not doing much for me so far.  Epic feels incredibly familiar throughout, where even the moments on display to possibly distinguish it from others feel like missed opportunities.  Several deaths occur in this film, for example, which could go a long way in providing actual depth to some of these characters, but the film quickly forgets about these facts and continues on with its fish-out-of-water/hero’s journey story.  Does the film need to be dark in order to have me entertained?  Of course not, but establishing some sort of identity that perhaps defies convention would have been nice.

The question of why not go darker could actually be related to what Blue Sky Studios wants to accomplish with their films in general.  For those unfamiliar, Blue Sky is responsible for the Ice Age franchise, most notably, and the first film is easily the best.  It deals with certain themes in a fairly adult manner, while still serving as an entertaining family comedy.  The sequels have watered down the original film’s darkness into much broader storylines for the franchise.  It comes as no surprise that these Ice Age films have continued to go broad, as the last two both nearly made $1 billion worldwide.  So with that in mind, I guess I could either see Epic as not wanting to break the mold that works or not quite finding a way to balance taking a chance against fitting the broad spectrum of appeal.

Moving past this and to what does make the film worth seeing for animation fans and kids in general, Epic is a visual delight.  What it lacks in depth, it makes up for in the beauty of the animation, the look of the world, and the genuine excitement in how the adventure aspect plays out.  It is practically expected from these more well-known animation houses that the movie will most likely look pretty great, but that shouldn’t take away from the fact that it does, indeed, look pretty great.  While the world is not the most defined land in terms of overall logic, the different environments encountered, which include trips to human sized locations from the perspective of these little guys, is well done.

Regarding the cast, no one necessarily stood out, but no one involved seemed obnoxious either, which includes the wise-cracking gastropods.  Amanda Seyfried actually fares quite well as the requisite human character that serves as the eyes for the audience.  She is given a personality and participates in ways that fit the story.  Colin Farrell using his natural accent was also a good choice.  I could make a point out of Waltz playing up the ‘Waltz-type’ role, but as a tiny villain this time, but I would instead like to make not of Steven Tyler playing some kind of caterpillar that gets to sing.  Again, the movie is for kids and there are enough colorful characters to keep them entertained.  I can never quite tell what is scary or what isn’t for younglings, but I know my screening was full of kids and I do not recall hearing much in the way of crying.

Epic succeeds overall.  It is entertaining enough, well made, and features a lot of different amounts of talent on display.  I wish there was more complexity to what I was watching, but as a family matinée, the film is fairly harmless.  There are added action-adventure elements that make the film generally exciting to watch (and the 3D is fine, given the format, for those concerned), but it helps that I at least understand the very simple stakes and enjoy the characters I’m watching.  There are upcoming animated features this year that I am looking forward to a lot more, but Epic is fine for what it is.

Mary Katherine: I'm not from this world.
Nod: What happened? You got shrunk?
Mary Katherine: Yes!
Nod: Seriously?
Ronin: It's been a weird day for everybody. 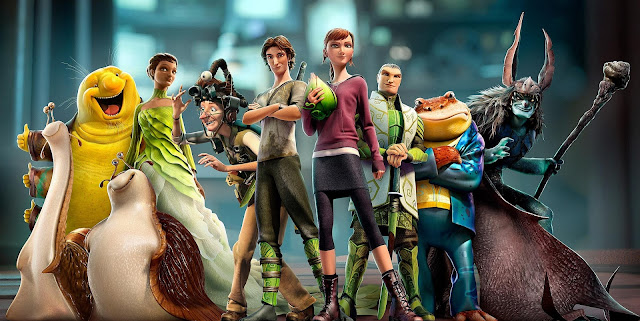