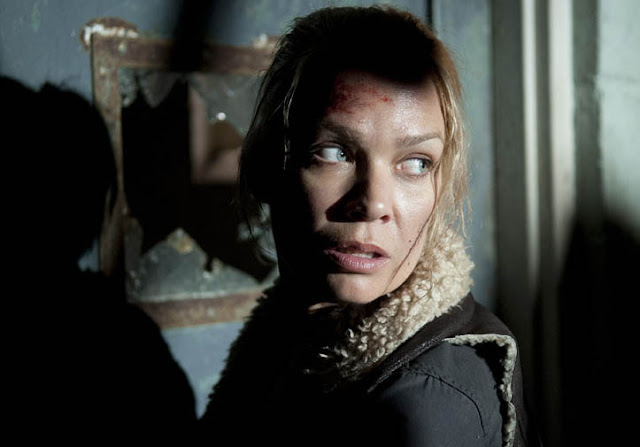 This week’s episode of The Walking Dead was solid in an exciting sort of way, because I was actually engaged in the suspense occurring on screen, while admiring the episode’s focus overall.  This episode, “Prey”, was also able to have me care about Andrea, which is impressive.  Of course, it had to resort to making me choose between her or a psychopath, so the choice wasn’t that hard, but I still found myself rooting for her, for a change, so that is commendable.  This really was an episode that managed to set the stage for the upcoming finale and put characters in unique positions, given that I am intrigued by where a lot of things are going, which is the kind of anticipation I want to have for the show, rather than hope everyone just stops yelling at each other. 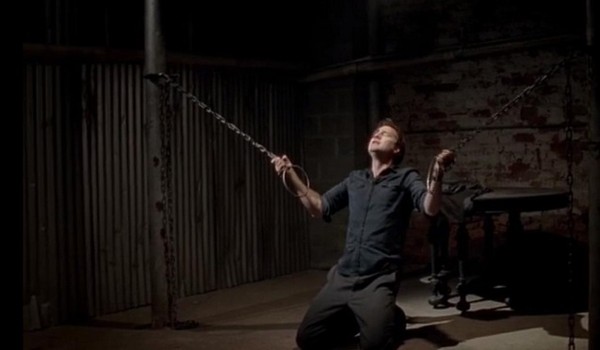 Let’s get the awkward opening out of the way.  Sure, it is a cool image and some nice juxtaposition to go from Michonne’s chained walkers to the Governor’s torture chamber, but giving us a glimpse into Michonne and Andrea’s lives together, during the winter really does not amount to a whole lot, especially in this episode.  The only thing this really showed us is that Michonne doesn’t open up very often and is fine with punishing evil people – things we already know about this character.  We do not see Michonne for the rest of the episode and there is not much to really connect this scene with, so it really just feels like it was shot and needed to be placed somewhere in the season.

Moving past this cold open, things become much more focused.  The episode is entirely based around the Woodbury side of this season’s story.  The Governor’s men are packing up all the weapons, preparing for their intended attack on Rick and his people.  Andrea, very obviously knows something is up and Milton is pretty forthcoming with the information at this point.  This is actually a character relationship that I enjoy.  Milton and Andrea are both very close with the Governor.  Milton knew him before this plague broke out, while Andrea has obviously built an intimate relationship with Gov. Phil.  Regardless of inconsistencies revolving around these characters, “Prey” is able to put these three into scenarios that make sense from a plot standpoint, which is why I appreciate the focus on this episode. 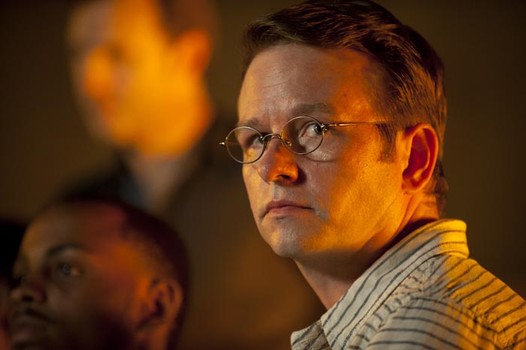 For Andrea, things really kick into gear once Milton tells her the Governor’s intentions with Michonne.  This is (finally) the last straw for Andrea and she vows to kill him.  With that plan not being the most practical (and Milton preventing a key opportunity), Andrea resorts to fleeing Woodbury with hopes to reach the prison.  Of course, she does so in a pretty haphazard way, getting caught in a bad lie, threatening Tyrese with a knife, and then exclaiming that Woodburry is a bad place, with little in the way of specifics.  Regardless, she’s on the movie, leading to the most exciting part of the episode.

As I have said quite a bit, I really enjoy the dialogue free segments of this show.  Given that the show is always effective in the action/thriller sequences, regardless of how well earned these scenarios are, it made for exciting television, as I watched Andrea serve as “prey” for the Governor.  With Andrea running away to an abandoned building and the Governor right on her tail, this was a very tense scenario that was well executed.  Yes, this was very much in cliché slasher movie territory, given all the noise being made, the surprise shocks, and even a “gotcha moment” once everything seemed peaceful, but The Walking Dead had a lot of fun playing up this horror movie-type scenario. 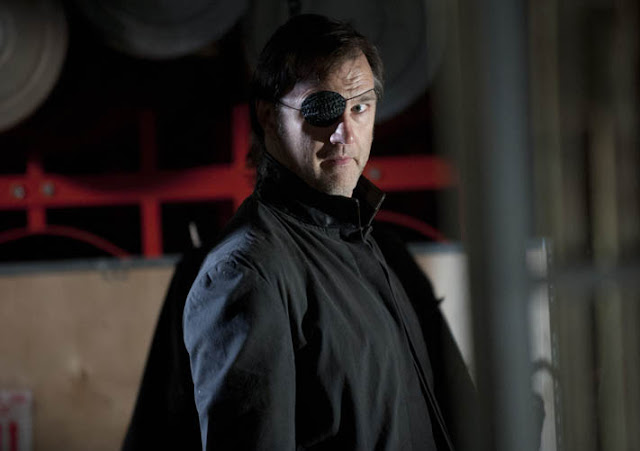 How about that Governor?  I expressed my concerns with the character in last week’s recap specifically, but this week I was really fine with what was required of him.  Instead of being this creepy guy that occasionally dips into darker territory, Gov. Philip was in complete psycho mode this week and I really enjoyed it.  He even dressed as a super villain while doing it!  By the time he entered the building in complete crazy killer mode, I was really down with seeing what he was capable of.  He was effective in the cat and mouse chase going on and his sinister whistling was the perfect mood setter.  This episode created a tension that was really necessary, as I actually thought one of these characters could have died this week and I would not have been opposed to that happening.

By the time we got to the end of this part of the story, I was impressed how much I thought the prison looked like a great place to be, compared to that abandoned building, let alone in a room with the Governor.  That is talented direction, which I will give credit to.  The only shot of the prison we see this episode is of it being bathed in sunlight, with good ol’ boy Rick handling watch duties.  While not a complete surprise, when the Governor did come up behind Andrea, it did make me fairly sad that she couldn’t make it to that happy local and hangout with Lil’ Asskicker, Daryl, and of course Beth the singer.  It also made me sadder to see Andrea locked up in the Governor’s torture chamber, but we’ll get back to that next week. 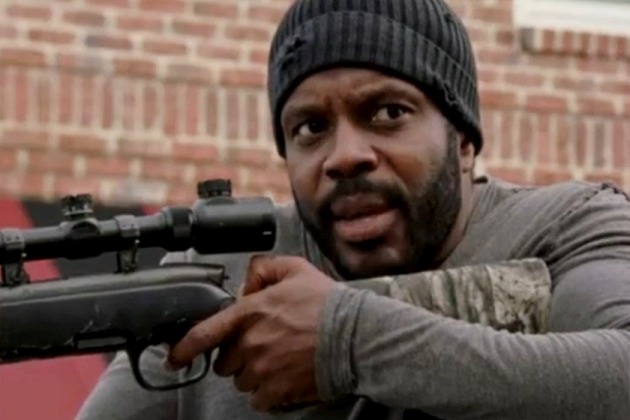 The other side of this story dealt with Tyrese, and dammit do I hope things work out so he and his sister can be with Rick and have everything be all honky dory.  Knowing what I know about the character and how this show is depicting him, it is clear that Tyrese is a good man, his sister too, and both deserve to be on the good side.  This episode is a bit clunky in what it tries to do, which is set up some drama between Tyrese and Allen, so the finale can presumably wrap up these characters, but the effort is there.  We get to see how Tyrese is very similar to Rick in his actions and know which choices he should make, even when situations are a bit muddled, as Tyrese wants to do right by everyone.  This means not making enemies when his current situation is pretty good, but still standing by his principles, such as not wanting any part of feeding people to walkers.

A big ol’ walker pit is an interesting sight.  I would have liked to see how this trap actually works, but regardless, a visit to this place obviously shows us more of the evils that Woodbury is capable of, even if the Governor claims this is just a scare tactic.  The “mystery” of this location becomes who burnt the thing down, although it is fairly obvious that Milton did it, but even still, I would be both pleased and displeased if it was someone else’s hand at work.  I do like being surprised, especially if it means that the show is not as predictable as it seems sometimes, but a completely random person would not be the best thing for the show either.  Additionally, seeing a pile of burnt walkers, some of which were still alive, was pretty damn disturbing. 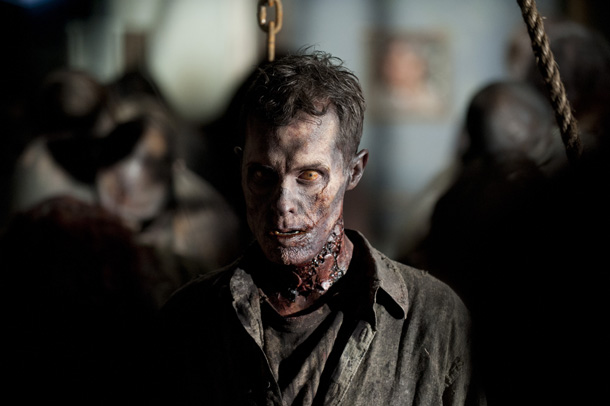 So “Prey” leaves us in a compelling place.  Andrea is now trapped in the torture chamber and Tyrese is of two minds as to how to get out of his situation.  The next rendezvous between Rick and the Governor is sure to be a deadly one.  And Milton is tired of looking over the bad things happening in Woodbury.  There only two episodes left this season, which will most likely be larger in scope.  For now though, I was quite pleased with this episode’s focus and excitement, especially since it made Andrea less annoying for a change.

Zombie Kill of the Week:  The Governor had a shovel party all over one walker’s face, which seemed to be pretty effective the first time, let alone the other five. 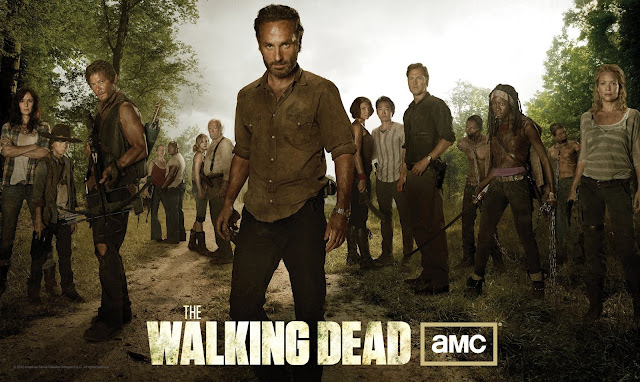 Aaron is a writer/reviewer for WhySoBlu.com.  Follow him on Twitter @AaronsPS3.
He also co-hosts a podcast, Out Now with Aaron and Abe, available via iTunes or at HHWLOD.com.
By Aaron Neuwirth
2013 AMC Andrew Lincoln Danai Gurira David Morrissey Laurie Holden Robert Kirkman The Walking Dead TV Series Zombies
Reactions: