Well that’s more like it.  After three average and somewhat lackluster episodes in a row, The Walking Dead has now delivered the best episode of the season so far and one of the best episodes of the series.  It comes as no surprise to me that this has to do with the series delivering on four out of the five things I wanted the series to do in this second part of the season (Essay HERE).  “Clear” was a fantastic piece of television, which told a focused story, developed the characters, had plenty of suspense, some light (and much needed) touches of humor, and pushed forward some of the running themes of the series.  This is the show I want to see and the one I hope to continue to see. 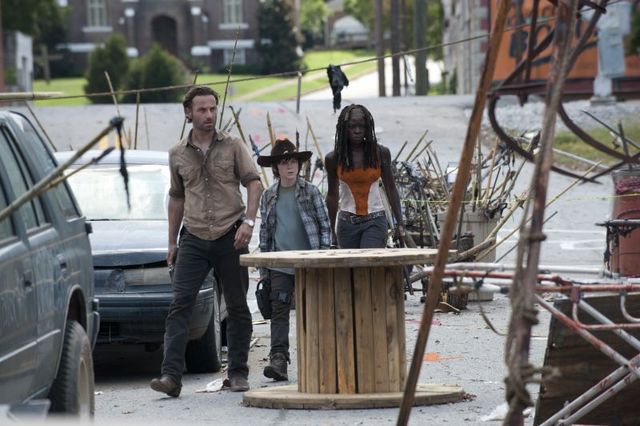 “Clear” is another road trip episode for the series, similar to “18 Miles Out” from last season, or “The One Where Shane And Rick Brawl”.  The difference is that we don’t cut back to the other, less interesting characters.  “Clear” has us following Rick, Carl, and Michonne on a trip to Rick’s hometown in search of supplies.  It eventually breaks into two stories, as Carl and Michonne head out on their own scouting trip (A crib for Lil’ Ass Kicker), while Rick deals with the surprise guest of the episode, Morgan (Lennie James), who was last seen back in the pilot episode, “Days Gone Bye”.

Yes, as the trio rolls into town, they encounter an area full of warning signs (literal signs with warnings) and booby traps.  It is a pretty ingenious set of traps for walkers, but also a sign that something is not right.  Rick, always one to welcome a challenge, heads in anyway, only to be caught by a man with a rifle.  This of course turns out to be Morgan, whom Carl is able to knock unconscious by shooting him in the bullet proof vest, which is revealed faster than angry parents could have written in about Carl shooting a guy.  This brings us to where the story splits apart, as the group heads into Morgan’s current home, which is loaded with all the weapons and ammunition they need.  Rick stays, the others head out, and Morgan eventually regains consciousness. 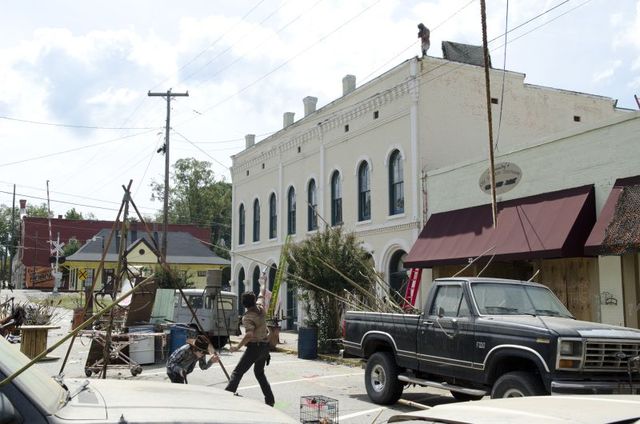 It is great to see Lennie James again.  As good as I think some of the actors are on this show, and I do think many of the actors are far better than some of the material they are given, Laurie Holden included, James is a fantastic presence that really sells the character.  Morgan describes his situation, his past, and what he assumes he can look forward to using a lot of words that directly address what is happening, as well as using his expressions and general demeanor.  He is not crazy, but he is weak, beaten, and doing what he can to keep what is left of himself together.  He has to “clear”.  We had T-Dog around for a majority of the series and learned next to nothing about him.  Morgan shows up for the second time and the man is deep and fascinating to watch.

Morgan is also a great reflection of where Rick could be headed if he doesn’t shape up.  Sure, Rick was on his game this episode, as he pulled through when needed (no one died this episode…besides that hiker guy), but as Michonne points out, he’s seeing people, and it can be tough to get a hold of things if one isn’t strong enough.  Stepping back though, think about the pilot episode:  Morgan was literally seeing his dead wife (dressed in white) and could not bring himself to a place of letting go until it was much too late.  Rick is there too (seeing the ghost of his dead wife, dressed in white) and if he is going to be leader, he’ll need to handle that grief in a less self-destructive way, for the sake of everyone.  He may not be able to convince Morgan to join up with him in the end, which is a shame for all of us (but hopefully Lennie James will make a three-peat appearance), but the two have a very good conversation and get to a great point of understanding each other.  It is so nice to care about multiple characters on this show at once. 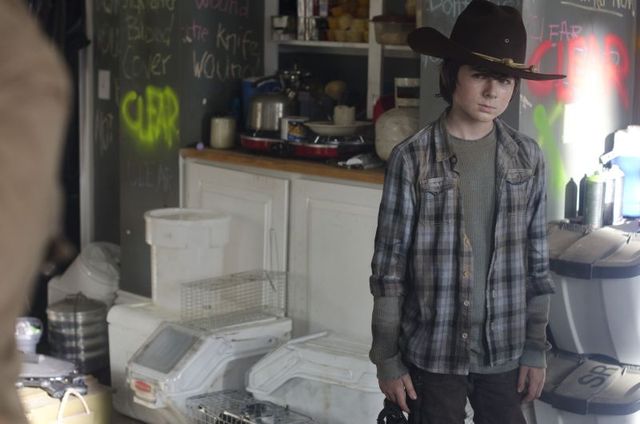 Speaking of which, Carl and Michonne have a fun and beneficial adventure of their own.  After the very non-secretive conversation Rick and Carl have that is easily overheard by Michonne, which is about how they all hate her as much as I hate Andrea, it becomes clear that Michonne wants to win people over.  Michonne has been one of the more problematic characters this season, but these recent episodes have finally allowed her to open up more.  “Clear” is a great episode for Michonne, which allows the character and the actress (Danai Gurira) to really show off all of the aspects of she has to offer.  It was starting to get sad that I literally had to praise the fact that she spoke in an episode, but here she has natural conversations, a sense of humor, and even advice to offer.  We may not be getting more Lennie James, but at least we’re expanding on one of the newer character mainstays effectively.

Lastly, Carl is doing his thing as well.  So far, the solution to making audiences not hate Carl this season has been to make him obedient and accurate.  I would like to think that there is still more coming, but for now, that is a fine way to handle the character.  With that said, Carl does try to pull a fast one on everyone, only to be joined by Michonne in his search for a last remnant of his mother that Judith (and he, and presumably Rick) can share.  As a result, the two of them get to bond, encounter walkers, fight and get around them in a clever manner, and succeed in their quest.  We get to learn more about Carl and where his head is at, as well as watch Michonne make a good case for herself with the person who is least likely to hold back on his thoughts. 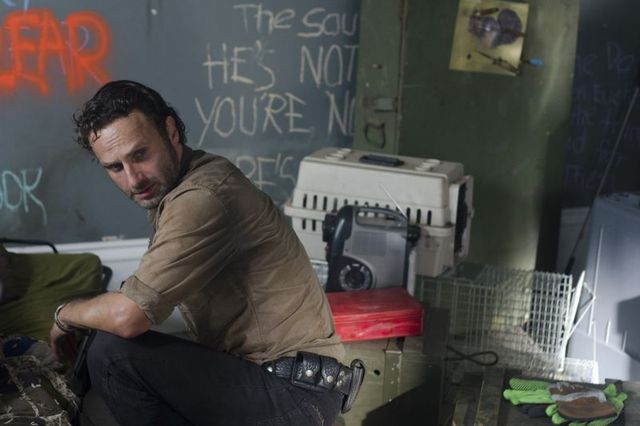 There are a lot of aspects that make this the ideal Walking Dead episode.  From a technical standpoint, this show is as good as ever, even as we enter a new territory we are not familiar with.  Regardless of how far a trip it is from the prison to Rick’s old stomping grounds, I am happy that we got to go there and see all the details of what has come of it.  There are walkers roaming around and some are dispatched, but the show plays these moments mostly as an afterthought, as this is a character-heavy episode, with characters that I mostly enjoy doing and saying things that are well-scripted out.  With that said, the show continues its effectiveness of building atmosphere and tension out of the fact that zombies do exist, just as it does with the idea that a potential threat on the roof of a building could possible harm one of our main characters.

This episode was fantastic.  It is all that I want from this show, even if it takes a step away from the main arc of the series (though, at its core, it is about our heroes prepping for war against Woodburry).  The character work in this episode is great, especially since we won’t see one of these characters again.  Pacing was spot on, taking time to tell contained story, complete with running themes that carried over throughout the episode, without hammering me over the head with the message.  Even the placement of commercial breaks felt just right.  I am a realist and know that we have to return to some of the aspects I am not as fond of in the upcoming episodes, but “Clear” is a great step towards getting right back into the groove that made the first half of this season so strong.

Zombie Kill of the Week:  Michonne was on a role this episode, so I’m going to give it to her stealthy kill in the bar, saving Carl in the process. 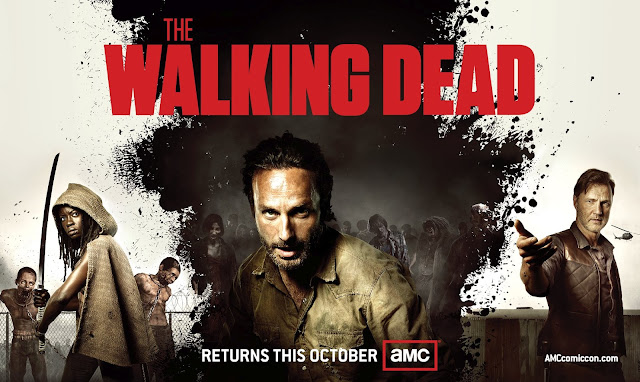 Aaron is a writer/reviewer for WhySoBlu.com.  Follow him on Twitter @AaronsPS3.
He also co-hosts a podcast, Out Now with Aaron and Abe, available via iTunes or at HHWLOD.com.
By Aaron Neuwirth
AMC Andrew Lincoln Chandler Riggs Danai Gurira Lennie James Robert Kirkman The Walking Dead TV Series Zombies
Reactions: