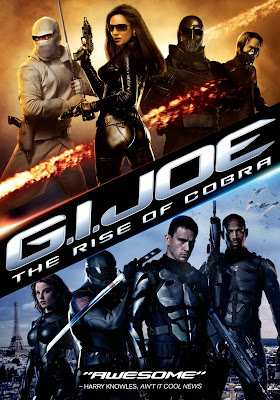 [Note: This was my original review of the first G.I. Joe film.  Be aware that while I haven’t edited my original writing, it was published on Flixster originally, with my various errors and lack of care to really fine-tune it.  Also take notice of how I disregard Channing Tatum and say that I “never plan to watch this film again”.  Oh how things have changed.]

General Hawk: Technically, this unit doesn't exist. But if it did, it would be comprised of the best soldiers from across the world. And when all else fails, they don't.

Michael Bay (The Rock, Armageddon, Transformers) is a very popular name when it comes to naming a filmmaker responsible for very big and loud, explosive action films, but credit should also go to Roland Emmerich (Stargate, Independence Day, Day After Tomorrow) and Stephen Sommers (The Mummy, Mummy Returns, Van Helsing). Sommers, who directed this very loud and explosive film, doesn't have the same problems that Bay does by making G.I. Joe: The Rise of Cobra over-serious in the wrong areas and pushing camera movement to its limits.  So, in a world where I can give Transformers 2 3 stars, I can't say that GI JOE doesn't accomplish what it sets out to do.

The (ahem) Plot: After a brief prologue in 17th century France (yep), we are taken to a NATO building where a Mr. McCullen (played by an evil Christopher Eccelstein) is explaining a new deadly device involving nanomytes. 4 prototype warheads containing the nanomytes are given to a military team lead by Duke and Ripcord (Channing Tatum and Marlon Wayans) to escort, only to be ambushed mid-mission, by a hot chick in leather (The Baroness played by Sienna Miller) and her team of super soldiers. Duke and Ripcord are saved by another team consisting of some Real American Heroes, and the warheads are saved as well.

Duke and Ripcord are taken back to the base of these heroes, where they learn of GI JOE, an elite team led by General Hawk (played by Dennis Quaid in a small role) and consisting of members including people like Scarlett, Heavy Duty, and Snake Eyes (played by Ray "Darth Maul" Park). Soon, Duke and Ripcord are allowed to become a part of the team.

Meanwhile, Mr. McCullen turns out to actually be evil and leading an evil organization (that may rise to become Cobra), which consists of The Baroness, Storm Shadow, and "The Doctor," (who may become some sort of commanding cobra in the future, played by Joseph Gordon Levitt). These bad guys really want to get their nanomytes back and wreak havoc, so the JOE's may be in for a tough week.

The Baroness: [Snake Eyes is following their car] He must have given up.
Storm Shadow: He never gives up.

I'll give this movie credit for not slowing down. It doesn't linger on being so silly and stupid. There is probably more action per minute that Transformers, but it was definitely louder. And while it’s certainly stupid, there is so much exposition and flashbacks handed to the audience throughout that you are never lost in what’s going on. I'll also give credit to most of the cast. I don't need to see Tatum in dialogue heavy roles in the future, but he is sort of likable here. Wayans puts in a few quips here and there, but is a more confident and likable side role than most comic relief characters in these type of movies. Miller and Rachel Nichols as Scarlett serve as eye candy. Everyone else is pretty much over-the-top. Even Brendan Fraser gets a cameo that makes me wish he starred in this film that he just seems to get. Then there's Joseph Gordon Levitt. After seeing him in Brick, The Lookout, and (500) Days of Summer, it’s something to see him suddenly playing Cobra Commander, but dammit, he does a good job at making a very over-the-top bad guy.

Oh yeah, and there are action scenes in this movie. Remember the end of Van Helsing, where it’s a giant clusterfuck of CGI constantly bashing all over the screen? That is a lot of this movie. It certainly fits the imagination of kids playing with GI JOEs in their back yard, but for the film, I can't imagine a large part of the budget spent on stuntmen from the amount of CG present. There are a lot of explosions, guns, missiles, billion dollar armored suits, and flying vehicles that all function to keep your eyes working to keep up. This movie revels in making sure you know what playing a video game feels like. Then you have Snake Eyes doing things that manage to merge ridiculous and cool, while dealing with his brooding arch nemesis, Storm Shadow.

In terms of staying true to the Hasbro spirit of the original toys, this movie does a better job than Transformers (once again) at being respectful to its source material, paying fan service (the term kung-fu grip comes to mind), and introducing GI JOE in a whole new way to this next generation. This is a spectacle film that uses its toy basis to make an absurd world that does manage to be consistent in its absurdity. Montage sequences involving underwater training missions and an implausibly cool car chase involving cars vs. mechanical suits manage to fit hilariously and effectively into this film.

So what’s left to say? This is another entry into the big, loud, and stupid category, but I can't say that I didn't enjoy the time spent watching this big, loud, stupid movie. I don't care to see it again, but this movie is fun to an extent, which is really what matters (Terminator Salvation, I'm looking at you), is better made than Transformers (clocking in a tightly paced 2 hours opposed to an overblown 2 and a half) and with extremely low expectations, I wasn't disappointed.

Some Trivia: A post-credits scene was planned where the famously mute ninja Snake-Eyes tells a joke to the G.I. Joe team, but Larry Hama advised against it since its humor would detract from the seriousness of the film.