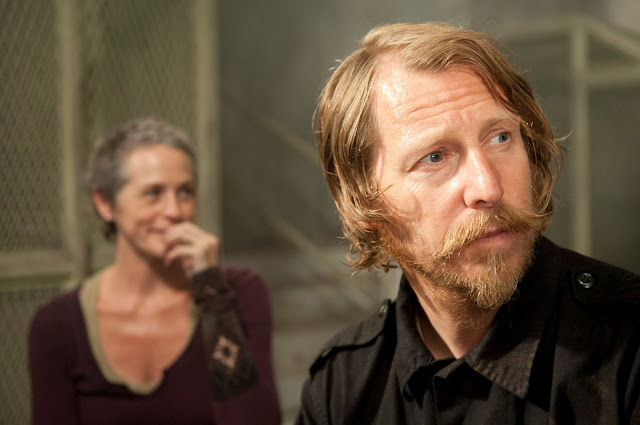 This week’s episode of The Walking Dead was a bit all over the place, literally, as we were exploring several different plot lines, checking in with many characters, getting a feel for how each person was dealing with their given situation, and then dropping all of that for an exciting finale filled with firefights and walkers.  It felt less like a cohesive story and more like a bit of a meandering narrative that ends simply because everyone was given guns and could shoot their way into the credits.  With that said, the episode was exciting enough, even if the high that I was put on by the first half of the season seems to be fading. 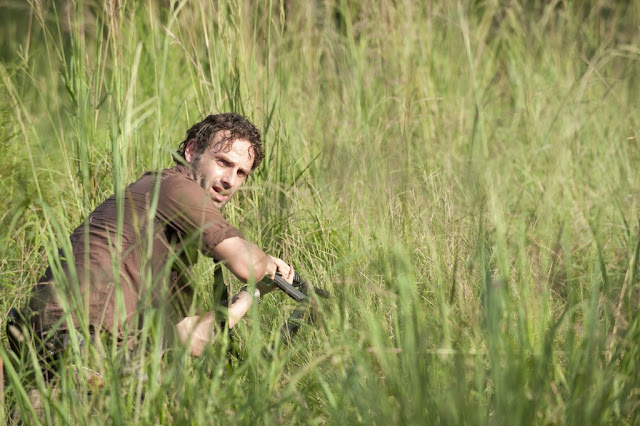 Since the episode starts with Rick seeing more of Ghost Lori (or my favorite name for it – LoriJuice), that is where I’ll start.  Rick is shown at the beginning of the episode going into the woods right outside the prison and is then seen towards the end of the episode, confronting Hershel about his state of mind.  I really want to be more compelled by all of this, especially since nothing about Rick as a regular person is all that interesting at this point, so seeing him covered in sweat and going crazy does a lot to make him less of a dull character.  I think my issue is that it seems very clear to me what Rick is going through, so spending time with him telling Hershel (and us) exactly what he’s going through seems redundant.  Given that my chief complaint about the series is the quality of the writing, I guess I can only hope that future episodes dealing with Crazy Rick find a more creative way of him dealing with his losses and burdens.

Meanwhile, back inside of the prison, Glenn is very concerned with the Governor staging an attack on them.  To his credit, he’s actually right about this, but his angered attempts to form a plan, which could even lead to an assassination attempt on the Governor, don’t go over well with everyone else.  On the plus side, Michonne is more helpful than ever, speaking up for a change, actively participating, and not continuing to suck the life out of a character most fans were really looking forward to seeing.  The most important part of all of this is observing how Glenn has grown over the course of this series.  Of course, given that we are always pushed to dark and violent places and do not get much of an opportunity to see the characters grow outside of these circumstances, Glenn has matured into a more hardened version of himself, but regardless, his attempt to take charge is notable and hopefully he’ll get a chance to calm down and do a better job at patching things up with Maggie. 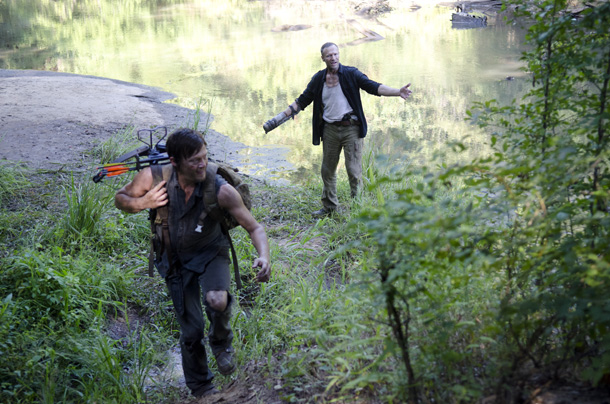 The other notable aspect on the prison side of things was the development of Axel, but as any keen-eyed supporter of the series may have known already, if the show decides to start developing its least essential character, that of course means it is time for that person to go.  It is a shame too, as Lew Temple did a good job at fleshing out what little there was to the toy gun totin’ thief that was prisoner Axel.  At least he was rather helpful in the end, as Carol was able to use poor Axel’s lifeless body as a human shield, to defend herself against the barrage of bullets headed her way.

I am jumping ahead though, as there is still some discussion of the Woodbury side of things.  There really is not much to say about Andrea and her reign as the new Governor of Woodbury for the time being, except that I can only hope there is a Twin Peaks-like spin-off in the works, which is all types of quirky and has the townsfolk being nothing but distant and awkward around Andrea.  Moving past this, including the awkward Dr. Milton conversation (“He’s on a run…?”), it was more fun to see the ruthless side of the Governor come out.  Given that David Morrissey has been doing a solid job, acting-wise, despite areas where the scripting has failed him, I was pleased to see him let loose and fire off bullets with plenty of cocky self-assurance.  Whether this was just a preview of things to come or a way to rile up Rick, Michonne, and the others, the Governor is doing his best to be full-on evil and I like it. 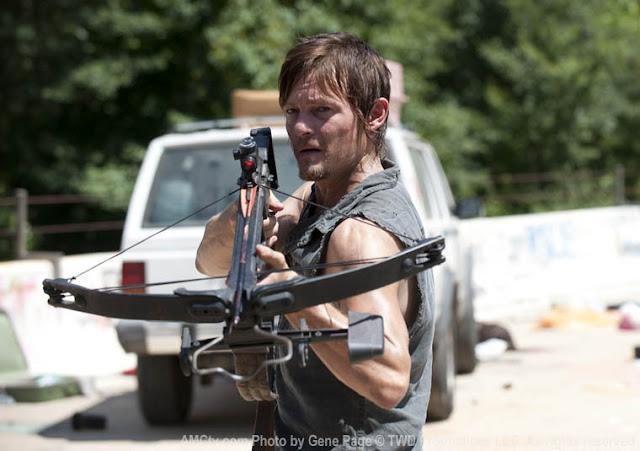 Last thought go towards the Dixon brothers.  Here’s a subplot that moved a lot faster than I expected.  The brothers fought, saved lives, fought some more, then saved Rick, and appear to be moving back in; all within the span of one episode.  Is it a quick development? Sure, but I will wait to see how this plays out with the rest of the season.  What I find to be more interesting is that we were given the chance to finally see Merle and Daryl interact for a significant period of time and really understand their dynamic.  Not only does this lead to an exciting mid-portion of the episode, where Daryl shows off some hero skills, while Merle tests his buttons, but it provided an area in the story that the writers must have been really excited about, as the dialogue was well-handled, just as much as the acting was between Norman Reedus and Michael Rooker.  I would have loved to see one of the self-contained episodes focus on these two or at most these two and one other plotline, but despite the speediness of this plot, I was really satisfied with what I got.

Getting to the end of the episode, despite some time spent flirting with Carol and fortifying the prison, poor Axel did get a bullet to the noggin and the rest of Rick’s crew were ambushed by the Governor.  This was obviously more of a way to open them up to future attacks by not just Woodbury jerks, but walkers as well, but it still functioned as a tense action sequence, with bullets being fired from all over.  It was a little amusing to watch Maggie arrive with a bunch of guns in her hands, so that everyone could be involved in this battle, but regardless, tensions were high during this whole scenario.  Whether or not I needed to see a big gun battle finale will be addressed in a second, but as predictable as it may have been, the Dixon crossbow bolt save for Rick was a pretty good symbol for the excitement had during this portion of the episode. 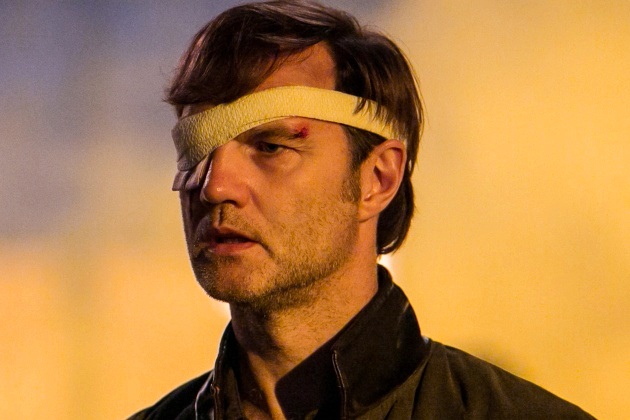 Earlier in this series, there seemed to be a bit of an issue finding a balance between episodes heavy on character and ones heavy on action.  Home had the feel of one that was very unsubtle in doing both.  It spent plenty of time having characters talk to (and lecture) each other, before the jarring shift into a bloody and walker-heavy ending.  When we dealt with the Dixons out in the woods, the transition to walker action was well-handled and fed right back into how these two interacted with each other.  I wish the show was more consistently like that.  Walker craziness is not needed all the time, but when it applies to the narrative, as a way to strengthen the characters, the show is really delivering in the way it needs to.  So for now, things are set up, various players have been moved into position, let’s see how this shakes out next week.

Zombie Kill of the Week:  Daryl had a lot to work with this week, but pulling a zombie out of a car and using the trunk to smash its head was the kind of juicy goodness that plenty of gore hounds would enjoy.

Glenn’s the next in charge?  Seems like Carl would be next in line.  Kid has got things under control, as far as I can see.

Yes, I did enjoy Michonne kicking some ass in the field as well.

The Governor may want Andrea to fill in, but you know who doesn’t care – Karen, that’s who.

Those prisoners would have been a lot better not meeting Rick’s crew.
Tyrese? Oh where, oh where can he be?

Do you think they drew straws to see who would drive the walker-filled van into the prison?