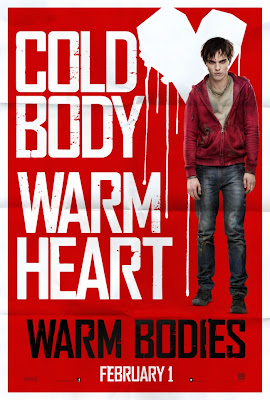 It would seem highly unlikely that I would like a romantic comedy with a regular human girl and a hipster zombie as the romantic leads that are supposed to fall in love, but here we are.  Based on description alone, this seemed like a bad idea, but rather than dwell on being a sappy love story with a catchy gimmick in the midst of audiences loving all things zombie and paranormal teen romance novel-related, Warm Bodies is actually an enjoyable, clever, and oddly sweet film.  It works best when it deals with the ins and outs of a zombie-infested world from the point-of-view of its zombie narrator, but even if the romantic drama and stakes do not fully work, this film was still able to make for a fun alternative to standard zombie fare, let alone generic rom-coms. 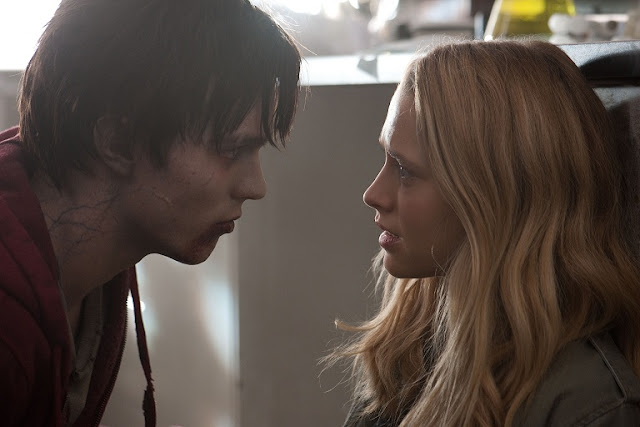 Nicholas Hoult stars as “R”, a zombie who cannot remember his actual name and spends the majority of his day slowly walking around a zombie-infested airport, searching for meaning in his life.  The zombie apocalypse is currently in full effect, but we spend the majority of our time learning about how the undead are dealing with this world.  R’s world is flipped on its undead head when he spots a human searching for supplies.  This is Julie (Teresa Palmer) who is seemingly going to be eaten by R, only to find that he wants to save her and take her back to his home (an airplane full of random items R collects, such as vinyl).  Julie is understandably confused, but soon learns that R is different, as he is changing for the better.  Soon, the two form a bond, which R seems far more excited about, as he and Julie begin to actually have fun together.  More importantly, Julie’s interactions with R seem to inspire the other zombies to change as well, which could possibly lead to an end of the zombie epidemic altogether.

The film also stars Rob Corddry as “M”, another zombie and R’s best friend; John Malkovich as Julie’s stern father, who acts as one of the military leaders of the remaining human population; Dave Franco as Perry, Julie’s human boyfriend; and Analeigh Tipton as Nora, Julie’s best friend.  Were you to piece these characters and their names together, you may be able to further understand how Warm Bodies has many connections to Romeo and Juliet, which is what Isaac Marion, writer of the original novel the film is based on, had done intentionally. 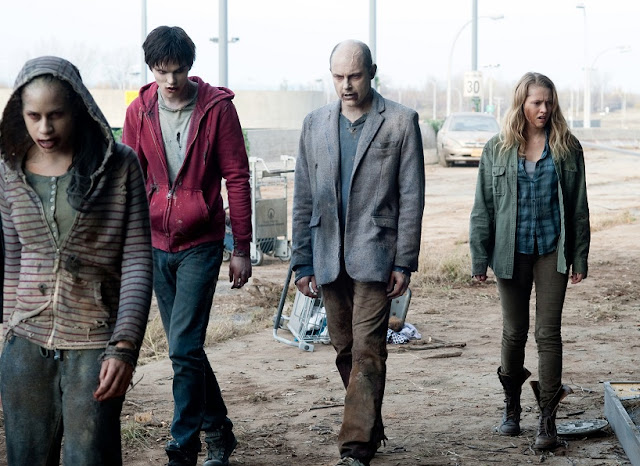 I was really into the world that this film sets up and could have actually enjoyed seeing more of it.  Given all the ideas introduced in this film, I am sure more could have been done with just the zombie society alone, but alas, this is a romantic comedy after all, and fortunately the film found a way to make that quite enjoyable, even if it takes a certain kind of audience to really believe in what they are seeing.  In a post-Twilight world, I can certainly see Warm Bodies being heavily scrutinized for capitalizing off of being an attempt to do the same sort of thing, except with zombies, but I would say that is unfair, as the movie is actually quite clever and certainly not as self-serious about its romantic struggle.

Julia:  What are you?

There is a lot of humor in this film, but never handled in a way that feels like parody.  The film basically takes the concept and world seriously and lets the characters deliver the humor based on the fact that they are mostly zombies and do and say things that are humorous (darkly humorous on many occasions).  Allowing R to have an internal narration is a great way to put us in the mind of an undead corpse walking around and to consider what it is that someone like this would think about.  Director/Screenwriter Jonathan Levine (50/50) does a good job at presenting the film as a comedy where the punch lines come from what these characters say and do, rather than going for the easier way out and making a goofy comedy.  It also helps that he lends a sense of style to the look of the film overall.  It may not be a high-budgeted film, but it looks pretty good and has plenty of humor to dish out. 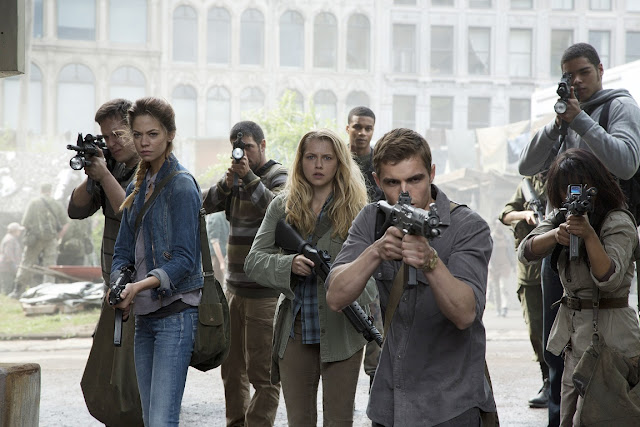 Now, I am very much a person that believes in the rules of what a zombie is and how it should act, but I have to say that this film allowed me to see another side of zombies.  This film allows zombies to think, run occasionally, and even communicate with speech.  The reason Warm Bodies is able to get away with having zombies do unconventional activities is because it does a good job of setting up its world and letting the viewers involve themselves in the lives of these zombie characters, as opposed to seeing it from the other way around.  Basically, I believed that R was capable of these things, because I liked him, and the universe established supports the idea that he could perform certain feats that are otherwise considered unheard of in most zombie films.  Warm Bodies may not be the first zombie feature to diverge from the standard zombie formula, but it is a very likable film that makes me not mind.

Nicholas Hoult does a fine job here as R.  I really enjoyed his performance and the way he was able to pull off something as tricky as delivering pathos in a character that eats humans to survive and brains to dream.  R is a very likable zombie, which Hoult’s performance conveys quite well.  At the same time, Palmer is solid enough as the Juliet to his Romeo.  She is not really given a chance to do a whole lot of challenging work, but she plays well off of Hoult.  Rob Corddry’s M is a true scene stealer, as he is literally the embodiment of a lot of deadpan humor.  John Malkovich is basically wasted in this film, but his presence is always fun, regardless.  I also enjoyed Analeigh Tipton in this film, which I found to be notable, given that I have only seen her in a few films, but enjoy her presence in general. 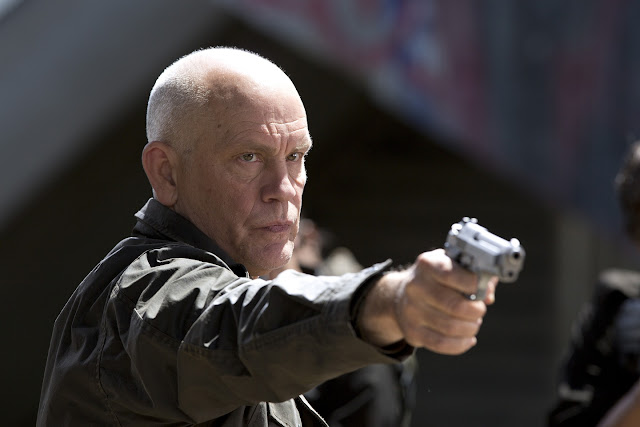 The issues I had with Warm Bodies are fairly simple.  The movie sets up a lot, but does not provide a whole lot of payoff.  The zombie universe is a lot of fun to be in, but the film gets to the point of having an action-themed third act, which is not all that effective.  There is a villainous threat in this movie in the form of “Boneys”, which are zombies way too far gone to have any sort of human “spark” left inside of them.  This never goes anywhere beyond the idea of having something to fight against.  Additionally, the idea of a zombie changing for the better is something that could be quite interesting, but we are really only given a Cliffnotes version of what that really amounts to.  There are just little things, overall, which hold me back from really appreciating the movie more, especially since the romance went only so far, instead of having me completely on board with the passion that the film had for these crazy kids getting together.

As a huge zombie film fanatic, the idea of making a romantic comedy, with a zombie protagonist, was already something that threw this film off my radar.  Sure it is a neat and different idea, but I am a stickler for a lot of the rules that come with the territory of a zombie film.  The best thing I can say about Warm Bodies is that it was able to make me not care about that and instead let me enjoy the quirky universe that this film was able to setup and deliver on.  Having a charismatic zombie lead also seems like an accomplishment unto itself, so I commend this film for taking chances and proving to be successful.  I may love my classic zombie films and I may already have a number one film that is a romantic comedy…with zombies (Shaun of the Dead), but Warm Bodies is a lot of fun and charming in an “eat my brains” sort of way, making it worthy of coming out around Valentine’s Day to provide for an alternative option that is nonetheless sweet.

Perry:  Whatever it is that you two have, it’s infecting the others. 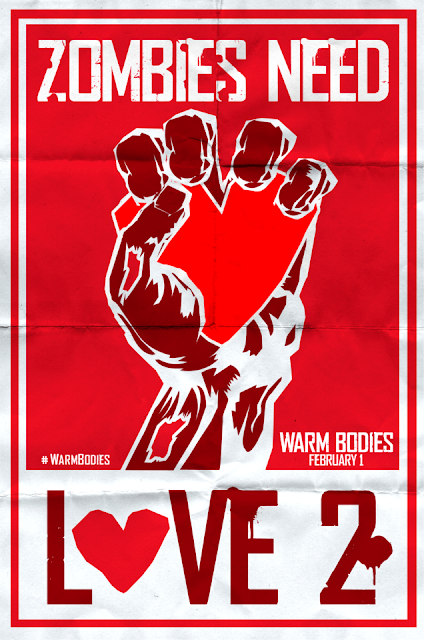 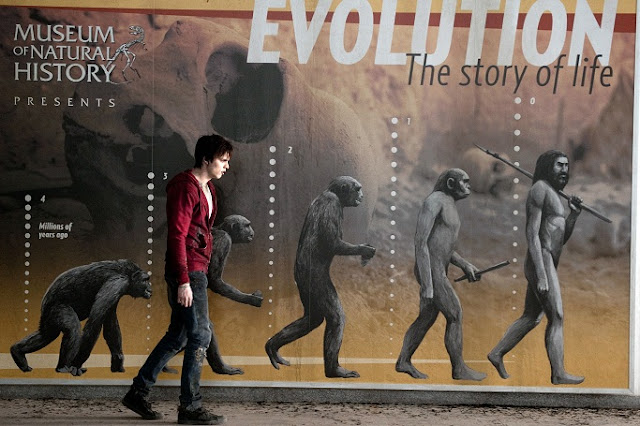