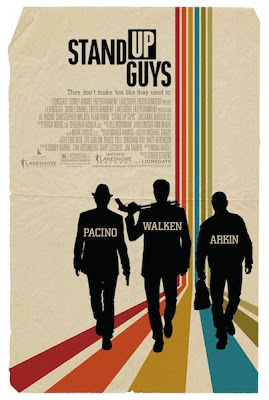 Doc:  What do you want to do…until then?

The idea of putting Al Pacino and Christopher Walken in a movie together, as guys who have been friends for decades (with added support from Alan Arkin) seems like an easy recipe for fun.  Add the fact that they are all playing criminals at the end of their run, roles that these guys could play in their sleep, and there is almost a guarantee that the film will appeal to those who love these actors.  Unfortunately, Stand Up Guys really wastes a lot of potential by not having these actors do anything more than play up all the standard jokes you see in films about old friends getting back together and acknowledging that they are older.  Sure, these guys know how to play a moment and hold solemn expressions on their faces when the time calls for it, but we also get a twenty-minute subplot about Viagra.  Add on a truly awful ending and Stand Up Guys is a pretty big disappointment, given what could have come from it. 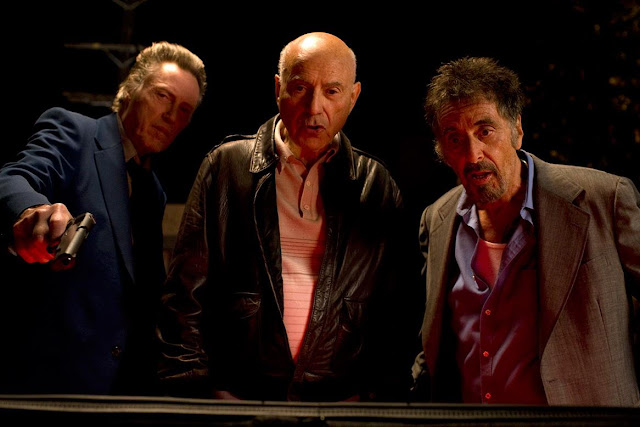 The film begins with Val (Al Pacino) and Doc (Christopher Walken) reuniting, following a 28-year prison sentence for Val.  The two are old partners, last together during a heist gone wrong, which resulted in the accidental death of a mob boss’s son.  This mob boss, Claphands (Mark Margolis), has now sentenced Doc to killing his old partner within the 24 hour period, following his release from prison, or else Claphands will have both Val and Doc killed.  Val is pretty much aware that his time is short and has Doc take him for a long night on the town in Los Angeles, which includes picking up their old wheelman, Hirsch (Alan Arkin), from an old folks home to have some fun with the guys as well.  These stand up guys get into a lot of mischief during the night, which includes visits to clubs, brothels, local mob hangouts, and graveyards.  Lots of wiseguy hijinks ensue.

For a film about dealing with the reality of being older and what that means for relationships, Stand Up Guys is certainly no Amour.  While that film strives to be a tough and realistic (and an expertly crafted) display of what an elderly relationship is like, Stand Up Guys is the more sitcom-y “Grumpy Old Mobsters” movie, designed to be crowd-pleasing.  It is Best Exotic Marigold Hotel all over again, but with less sumptuous visuals and “hilariously” casual racism from Maggie Smith’s character and more criminal activity and Walken/Pacino/Arkin dialogue rhythms.  Now I would be all for something like this if the comedy in this movie was in fact crowd-pleasing, but the film settles for very easy jokes that I see in basically any comedy revolving around the elderly. 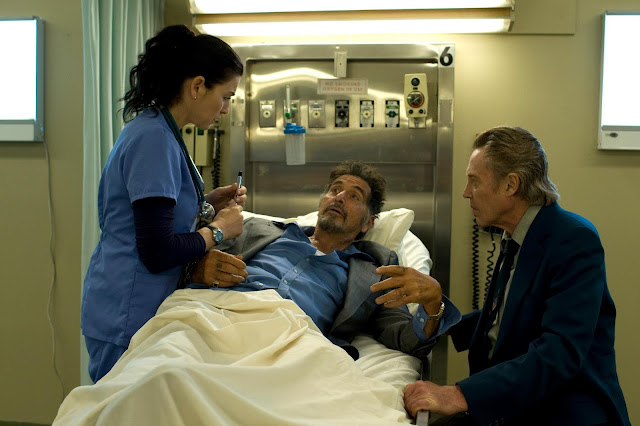 Stand Up Guys is a big miss when it comes to originality and remains predictable throughout, with the exception of its ending, which only seems surprising because of how idiotic it felt to me.  Writer Noah Haidle treads no new ground and decides to have these old guys deal with tired material that includes plenty of Viagra jokes, the standard “look at all this medication I’m on” joke, the “old guy who looks frail, but can still be plenty active, when the time calls for it” joke, and of course “the old guys teach the young guys a thing or two about manners” joke.  If I am not letting Clint Eastwood get away with it anymore (you can skip Trouble with the Curve by the way), then Stand Up Guys is not getting away clean either.

Comedy does not make up all of the film, of course, because this is the type of story that is supposed to register as poignant in some way, but that also comes off as false.  The two big moments that should come off as the most emotional are way too predictable, which is not necessarily a bad thing, except that one of those moments is treated in an illogical manner, given the people involved and the setting (hint: late night graveyard), while the other is handled rather haphazardly, given the absurdity of the final ending of the film.  I can say that a certain character played by Addison Timlin is good, given what she is required to do, but it feels like anyone could emote in a similar manner, given that there is only one thing required to be delivered by that performance. 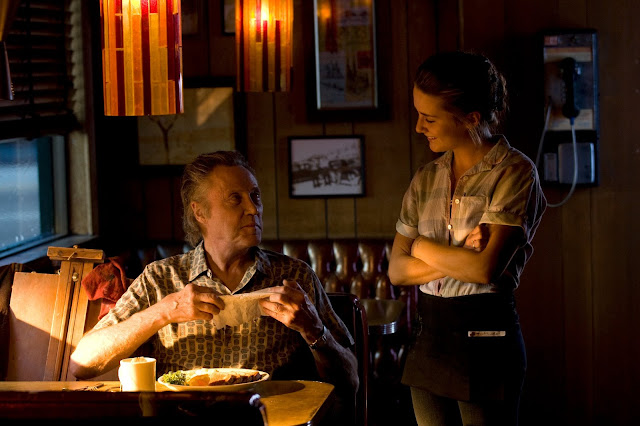 Speaking of the cast, it certainly does feel like people were happy to sign up for this movie, simply because of Pacino, Walken, and Arkin being involved.  No one is bad in this movie, but few are given a chance to really shine.  Julianna Margulies and Vanessa Ferlito appear in this film, but have little to do, beyond play up the fact that they are female characters in the presence of these older guys with “kind” hearts.  The best supporting performance really comes from Lucy Punch, as the owner of the brothel the guys visit, multiple times.  She gets a fun character to play and actually delivers funny lines of dialogue that add a level of quirkiness to this film.  The leads are of course good, but it is nothing these guys can’t do.  Walken is maybe the standout, but only if you are happy with him playing up the sad eyes approach to his performance, rather than going full Pacino.

It is not so much that I wanted this film to be “great”, but I would have at least wanted to consider it “good”, given what I thought I was getting into.  A film like Stand Up Guys could have been a light, but enjoyable picture, yet the film steeps itself in contrived material and offers little beyond corny jokes.  It certainly is not without laughs, because as bad as a film can be, when you put Pacino, Walken, and Arkin in a movie together, you are bound to have some fun moments, but it still feels like an overall waste of their talents.  Given that I have seen each of them be much better in recent films, it really comes down to the material they were given.  Stand Up Guys may have plenty of material to inform the type of film that this is and the history that comes with it, but when you have awkward writing at play, it shows.  See these guys stand up better in other films.


Val:  They say we die twice. Once when the breath leaves our body  and once when the last person we know says our name. 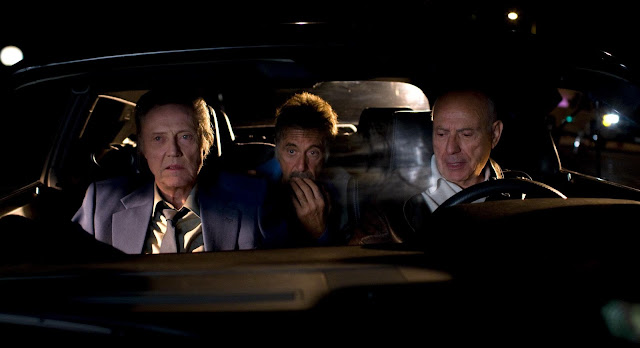