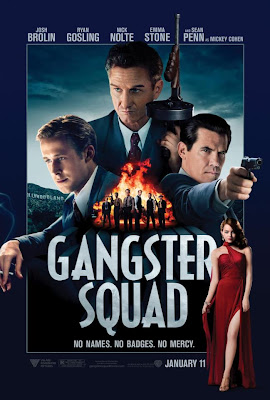 Mickey Cohen:  A cop that’s not for sale is like a dog that’s got rabies.


Gangster Squad is the R-rated, spiritual successor to Dick Tracy that nobody wanted.  The film is a stylish exercise in action sequences, featuring a bunch of good actors that have decided not to do much acting, aside from Sean Penn, who attempts to devour every scene he is in and hopes to stop short of chewing on his own makeup.  The film is exactly what I expected, stylish, “fun,” and terrible, all within the same breath.  The good thing is that everyone is at least dressed quite nicely, but in the realm of gangster pictures, this one can simply sleep with the fishes, rather than sit on top of the world. 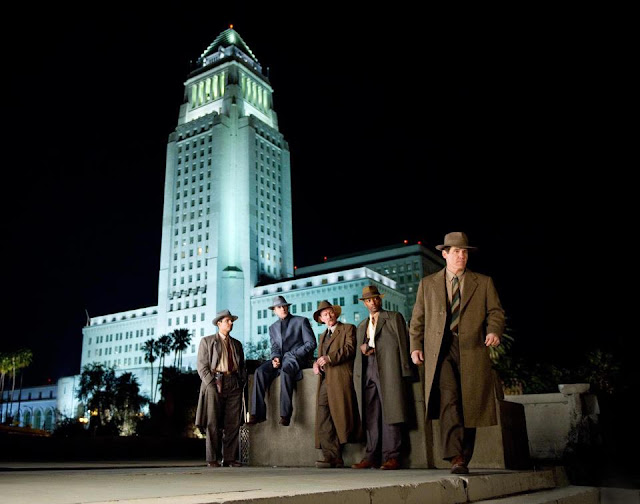 Based on true events, but that does not really mean anything, the film revolves around the nefarious gangster Mickey Cohen (Sean Penn), who is looking to take the soul of 1940s Los Angeles and corrupt it for his own gain.  In order to stop him, LAPD Chief Bill Parker (Nick Nolte) enlists a tough but honest cop, WII veteran Sgt. John O’Mara (Josh Brolin), to head up a team of police officers, who will be working off the books and not as cops in order to take down Cohen and his gang.  O’Mara’s “Gangster Squad” includes smooth-talking Jerry (Ryan Gosling), who is quick with his wits and his guns; Rocky Washington (Anthony Mackie), who is quick with a knife and the token black member, proving that this is a progressive 1940s Gangster Squad; Conway Keeler (Giovanni Ribisi), the squad’s wire-tapping nerd; Max Kennard (Robert Patrick), the old man who is fast with a six shooter; and Kennard’s young, Latino partner, Navidad Ramirez (Michael Pena).  Together, these men will have to sink to Cohen’s level, if they want any shot at taking him down.

The film comes from director Ruben Fleischer, who previously brought audiences Zombieland and 30 Minutes or Less, and while I don’t love either of those films, Zombieland (which I do like) seems to indicate that Fleischer is only as capable as the scripts he is given, otherwise he just seems to be coming off as Zack Snyder-lite.  Gangster Squad is plenty stylish in its presentation of the costume and production design (plenty of overcoats and fedoras), flashy action sequences, and use of slow motion.  At its core, this film is pure comic book pulp, with the twelve-year old inside of me screaming out his love for the film.  It is a very violent mainstream release with a macho cast, but if it had more fun with itself, the movie could have really benefited. 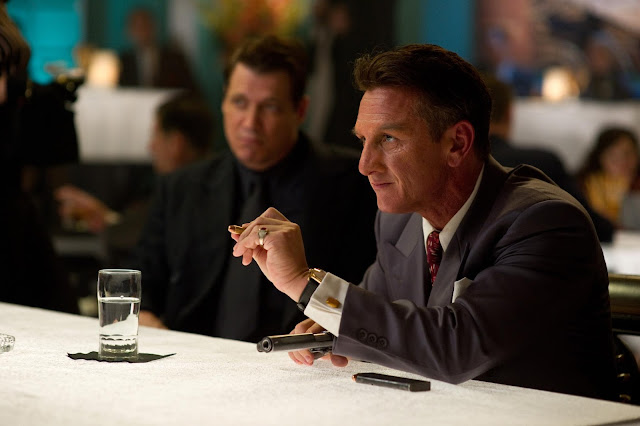 A lot of issues I would have been able to easily forgive if Gangster Squad did not take everything so deadly serious, especially in the midst of the ridiculous situations that the squad gets themselves into.  Sure there are laugh lines and moments of levity, but in a film that has so much outlandish stuff going on in the way it presents over dramatic story beats and action, the actors were apparently not given the proper instruction of what kind of movie they were in, reacting fairly stiff as a result, aside from Sean Penn of course.

Penn is doing his best to outdo Robert De Niro as Al Capone in The Untouchables, which was as terrible then as it is now.  No one could accuse Penn of sleepwalking through his performance as Mickey Cohen, who relishes the chance to go gloriously over-the-top.  At least he seems to know what kind of movie he is in, but that just makes it all the more inconsistent with the rest of the film.  The rest of the cast is pretty bland, moving through stock lines of dialogue and character beats.  Josh Brolin is decent, only because he has a whole arc to work with. Gosling gets to be pretty and have an accent, which is enough to be Cohen’s girlfriend, played by Emma Stone, who has nothing to offer in this film.  Nick Nolte does his best attempt at English, which allows for one of the most hysterical performances of the film.  Robert Patrick gets to try his hand at seasoned veteran of the group, but gets very little to do, which is what can basically be said about the rest of the squad, especially poor Michael Pena. 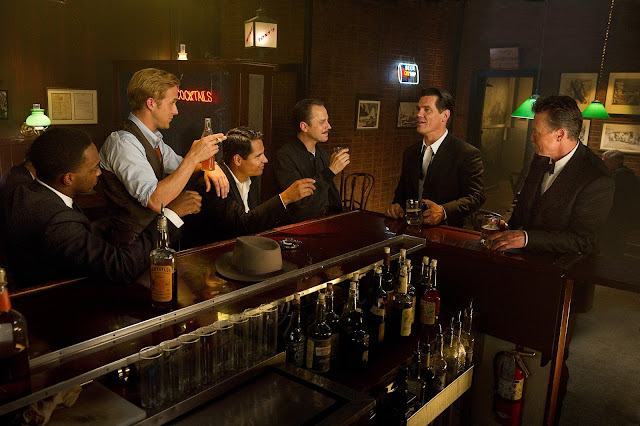 The best performance actually comes from Mireille Enos (of AMC’s The Killing), who propels the role of the worried, loving wife to a slightly greater level, as she becomes important to the story, without becoming a damsel in distress.  She has a couple scenes of straight dialogue with two of the main characters, which actually showed ‘acting’ occurring in the film.  This is not the kind of film that requires well-written female characters (again, it’s no Dick Tracy or even The Mask), but at least Enos walks away on top, as opposed to Stone.  Emma Stone is an actress I like, but because of her comedic chops more than her “over-the-top” beauty, which this film suggests she has (was no one more age-appropriate available for Penn and Gosling to fight over?).

Getting back to the story, there is really nothing fresh offered up in Gangster Squad.  The film is essentially the gangster film equivalent of The Avengers, without the benefit of five films to have better prepared us to enjoy watching these characters.  There is the chance to address the moral nature of what these men are doing to stop evil, but that is brushed aside.  The story is, instead, clichéd and predictable, which would matter less if the film’s style seemed impressive.  A few of the action sequences are staged in an entertaining sort of way, making me wish that the film was more of a straight-up comic book film, but others are actually confusing, given my questioning of certain film logic, which I am generally not one to do, were the film to have me laughing along with it and not at it.  I was also thrown off by the very apparent digital photography that took place in the film’s climax.  At this point, it seemed like Gangster Squad could not even agree on taking a stylishly glossy or gritty approach to its cinematography. 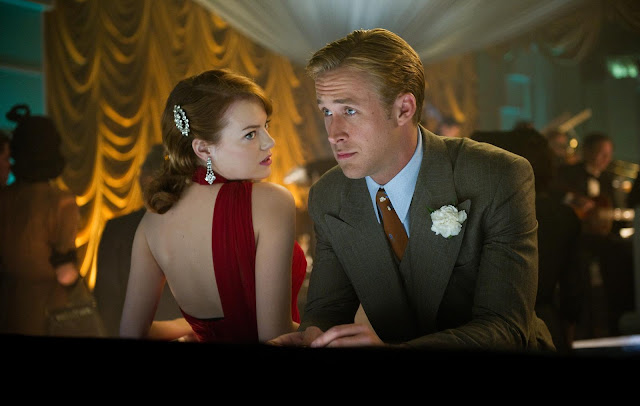 I had my thoughts going into the film regarding its quality and came out with more or less the same thought.  Gangster Squad straddles the line of being bad and fun-bad.  It has a lot of bad acting from many involved, besides the bland acting by most of the leads, but that only helped to keep me entertained.  Characters find themselves in goofy situations, so tension was lost, but fun still seemed to be had.  The film is going for style over substance, but this colorful cartoon of a film does not leave much of an impression.  “So bad that it’s good” is a way to describe Gangster Squad, but if one does go see it, be sure to watch it with others who can see that too. 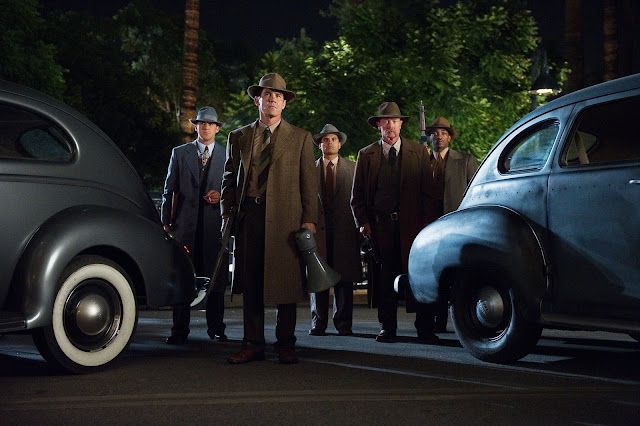