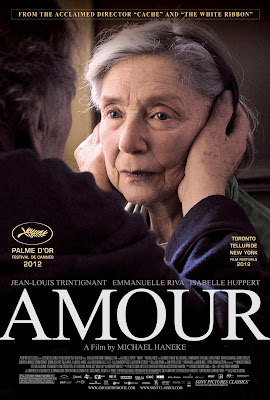 
Georges: Things will go on, and then one day it will all be over.

Admittedly, I have had some trouble really wanting to find the time to write a whole bunch about Michael Haneke’s latest emotionally draining film Amour.  I have joked in many instances about it being “one of the best comedies of the year” or “a laugh riot,” but more because I do genuinely think it is a fine piece of dramatic filmmaking, as opposed to it being The foreign film that you Have to see This year (also, I’m immature).  The film can be bluntly described as being about getting old and dying, but there is more to it, which reflects how a lengthy relationship is tested and reflected on in the wake of the inevitable.  Georges (Jean-Louis Trintigant) and Anne (Emmanuelle Riva) are in their 80s.  They are retired music teachers.  One day, Anne has a stroke, which changes the dynamic of their relationship, given that things are about to change in a very significant way.

I was happy to correctly predict that Haneke would receive an Oscar nomination for his direction of this film.  What Amour is able to accomplish from non-flashy, very deliberately cold direction is a film that does not pull any punches and manages to put the viewer right in the reality that these characters are experiencing.  More surprising was seeing Riva be nominated for Best Actress, but I certainly find it to be deserved (It’s important to note that Trintignant is fantastic as well).  Both actors are doing tremendous work at making this film accomplish what it needs to, without ever having the film feel sappy.  It is sad and emotional for sure (various events are the reason why I delayed writing this for so long), but never in a position of betraying the tone that this film is going for in favor of a more traditionally commercial way to handle this subject matter.

Amour is certainly not a film that I definitely need to revisit again, very soon, but that should not take away from how much of an effective piece of filmmaking it is, which deserves the recognition it has received.  It is an honest, well-acted, and tough film to watch.  It is also a difficult, but more accessible film from Haneke, who loves to challenge his audience.


Anne: What would you say if no one came to your funeral?
Georges: Nothing, presumably. 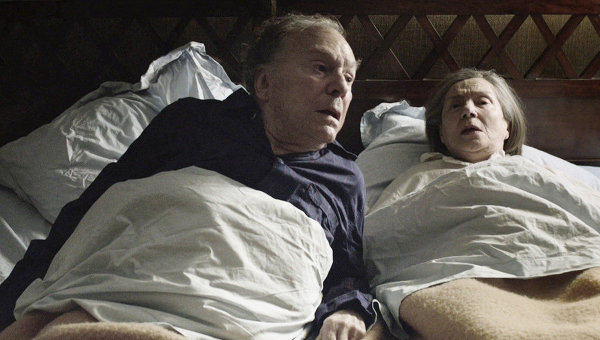 Aaron is a writer/reviewer for WhySoBlu.com.  Follow him on Twitter @AaronsPS3.
He also co-hosts a podcast, Out Now with Aaron and Abe, available via iTunes or at HHWLOD.com.
By Aaron Neuwirth
2012 Films Brief Thoughts Drama Emmanuelle Riva Jean-Louis Trintigant Michael Haneke Oscar Nominated
Reactions: